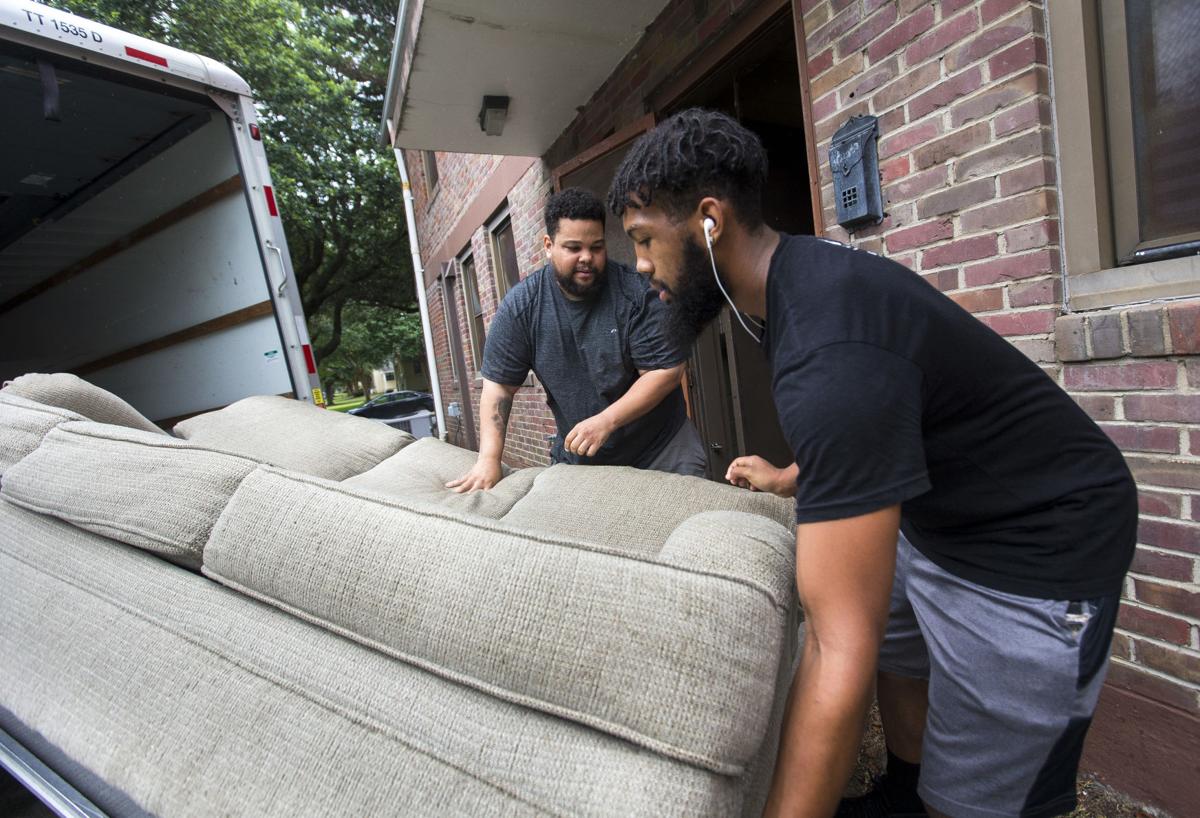 Elnishaad Gathers, 20, and his father Cornell Gathers move a couch onto a U-Haul truck on Friday, June 7, 2019 in Charleston. They were moving to the Enston Homes affordable housing complex owned by the Charleston Housing Authority. Nearly a third of S.C. households are burdened by unaffordable housing according to a new state report. Andrew J. Whitaker/Staff 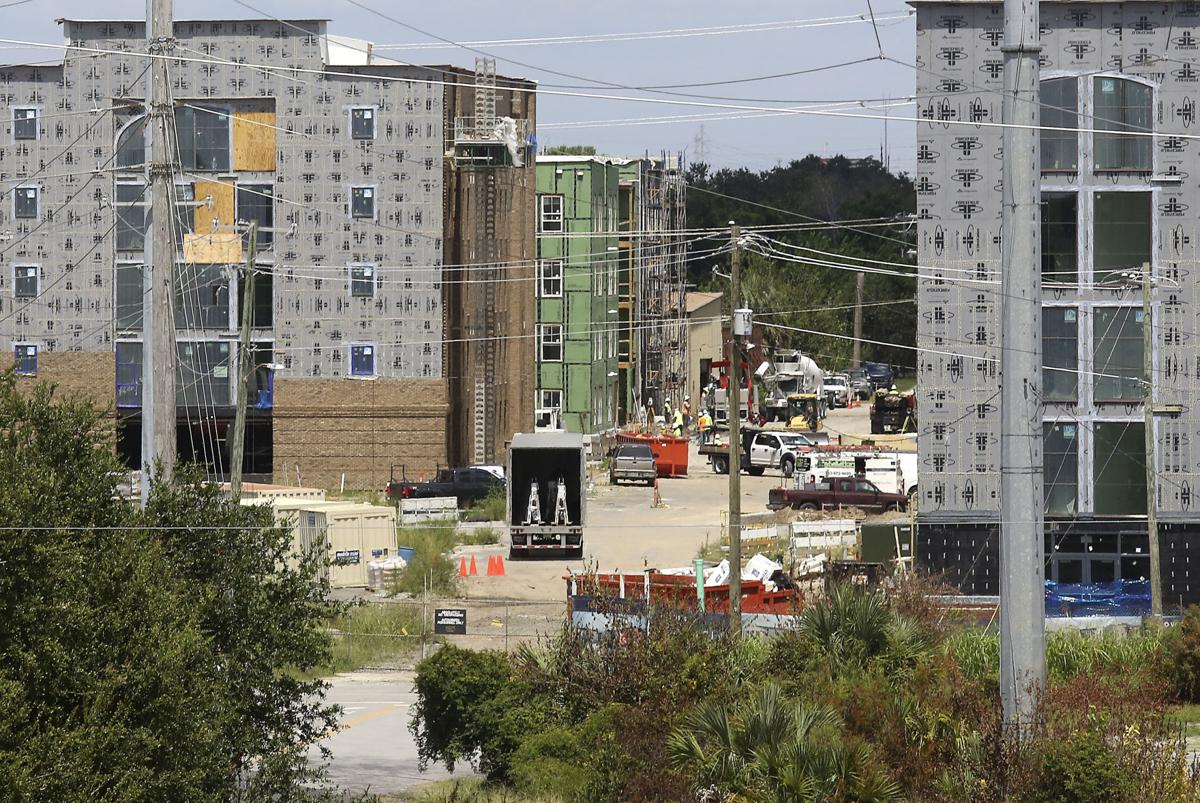 Work continues on Foundry Point Apartments on Brigade Street in Charleston Wednesday, August 21, 2019. Two-bedroom apartments there will rent for up to $3,600 monthly, according to the development’s website.. Brad Nettles/Staff 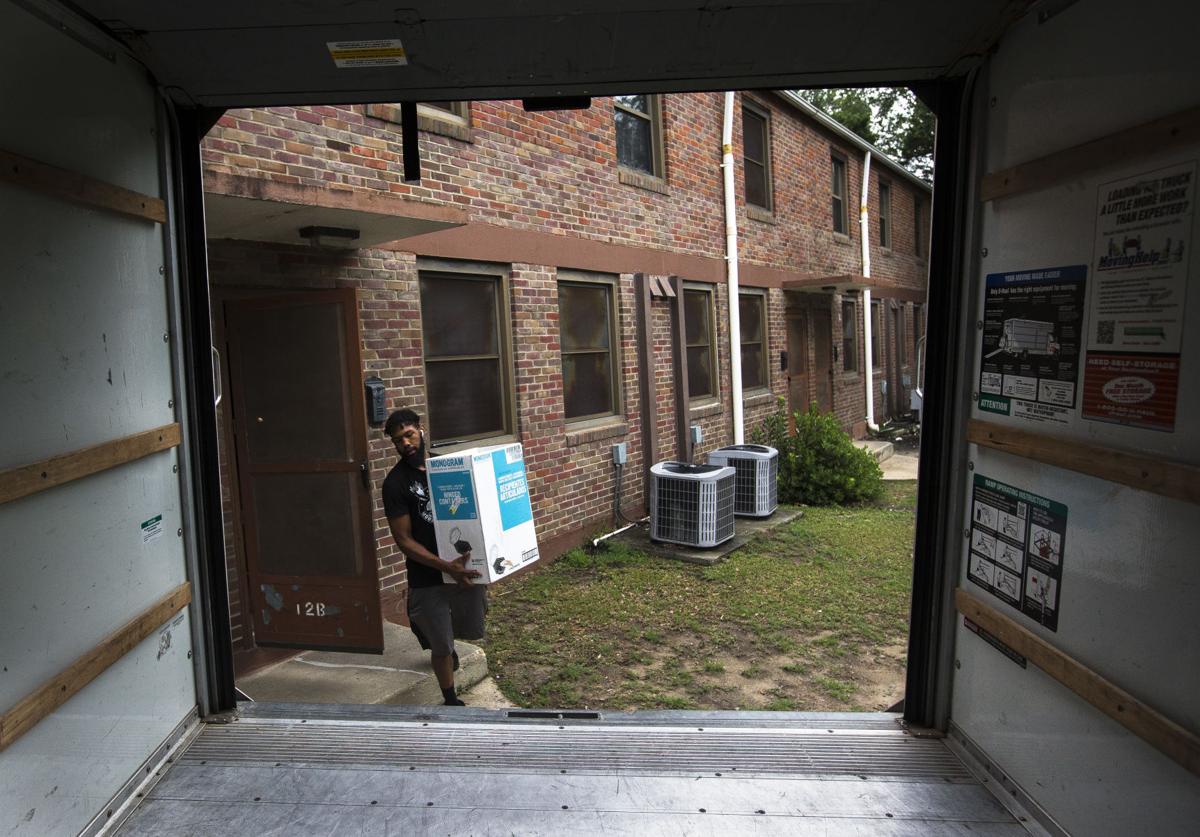 Elnishaad Gathers, 20, and his father Cornell Gathers move a couch onto a U-Haul truck on Friday, June 7, 2019 in Charleston. They were moving to the Enston Homes affordable housing complex owned by the Charleston Housing Authority. Nearly a third of S.C. households are burdened by unaffordable housing according to a new state report. Andrew J. Whitaker/Staff

High rents, low incomes and expensive houses have created an affordability gap that's squeezing nearly a third of South Carolina households, according to the state's first study of the issue since 2002.

One key reason: Despite economic growth and unemployment rates near record lows, South Carolina real wages remained lower in 2018 than at the end of the Great Recession, while rents and housing prices have soared.

The South Carolina Housing Needs Assessment found that "while nearly all South Carolinians who want to work can do so, they are often losing ground relative to the prices they pay for basic expenses, chief among them housing."

The South Carolina State Housing Finance and Development Authority report was scheduled for public release Monday, and was reviewed by The Post and Courier in advance.

The result was a stunning number: $8.4 billion. That's nearly the amount of tax revenue the state of South Carolina's expects to collect in the current annual budget, $8.7 billion.

"Excessively high housing costs cause 32 percent of SC households, including over half of renters, to come up short in meeting their most basic needs (food, fuel, etc.)," the report said. "This imposes a cost on the state of $8.4 billion borne by public assistance, private charity, or personal deprivation."

And the problem is expected to get worse before it gets better, due to continuing population growth in the state's urban and coastal areas.

“You have essentially two different housing crises, in different parts of the state," he said.

In growing areas, there's strong employment and higher pay, but rents and home prices have soared. In rural areas, housing is inexpensive, but incomes are low and much of the existing housing is in poor condition.

“The greatest need, as I see it, is in urban areas," said Charleston Housing Authority executive director Don Cameron. “There are probably five times as many (households struggling with housing affordability) in urban areas, because that’s where the population is."

The study did find that high-growth metropolitan counties — Charleston, Richland, Greenville, Horry — have the largest numbers of renters that spend at least half their income on rent and utilities. In a state with 46 counties, those four account for more than 40 percent of the severely cost-burdened renter households.

“The biggest challenge is finding money to do it," Cameron said.

Another challenge is that, in both large cities and small towns, South Carolina residents face some of the nation's highest eviction rates.

Key points highlighted in the state report are:

The new state report helps to quantify a problem that's well-known and much discussed. Already, the court system is experimenting with ways to address high eviction rates, SC Housing is working on modifications to the Low Income Housing Tax Credit review process, and 40 members of the S.C. House of Representatives have co-sponsored a bill to create a state tax credit to help fund housing.

The "Workforce and Senior Affordable Housing Act" was approved in the House in April and is awaiting attention in the state Senate Finance Committee.

“A lot of the question about what we do now is in the hands of policy-makers," Grady said. "If you’re going to move the needle on a problem of that size, you need initiatives and engagement at all levels."

He said community land trusts, such as Charleston and North Charleston are experimenting with, could be part of the solution. Land trusts aim to make housing more affordable by excluding the cost of the land from the price of the housing, typically by having a nonprofit own the land.

Grady said that inclusionary zoning — requiring developers to build some affordable housing when they build large subdivisions or apartment complexes — could also help, if the state allowed it. And increasing housing near employment centers would help, but that idea often conflicts with the preferences of people opposed to high-density housing.

“A lot of people want their communities to stay the way they are," Grady said, but that can lead to long commutes and more traffic. “If you don’t build, you’re creating the traffic that you’re trying to avoid by not building."

At a July hearing of the House Legislative Oversight Committee, Rep. Lee Hewitt, R-Georgetown, asked S.C. Housing officials to try and do more to assist coastal areas where land costs are high but wages are not.

"I know that, in the area where I’m from, people are driving two hours, each way, to work because that’s where the affordable housing is," he said. “We’ve got multiple residents who work at Boeing who have moved to Georgetown because it’s more affordable."

An increase in housing that people can afford would not only benefit the tenants, but would also result in more spending on other goods and services, according to the S.C. Housing report.

"Because you have this affordability gap, you have people who are unable to consume goods they would purchase in the private sector," Grady said. “This is something that is a problem that affects virtually every community in the state."