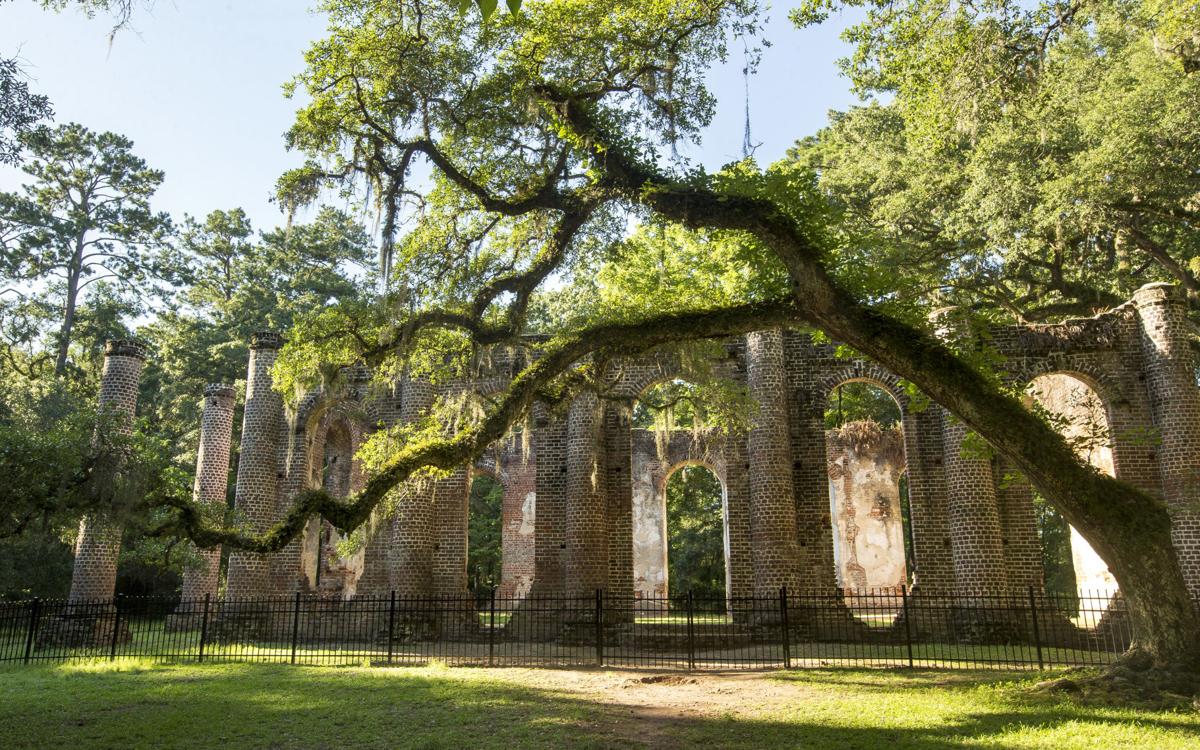 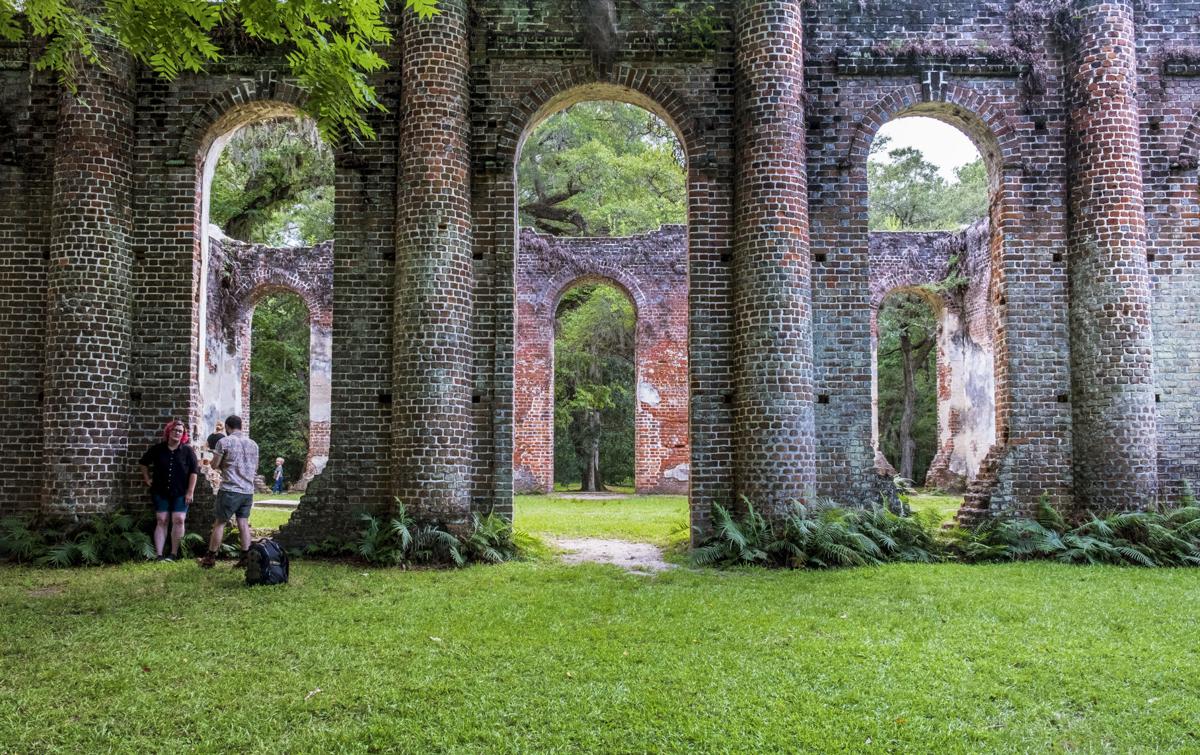 Visitors wander through the ruins of the Old Sheldon Church in 2018. Now a fence surrounds the site, one of the most popular in the area. File/Matthew Fortner/Staff 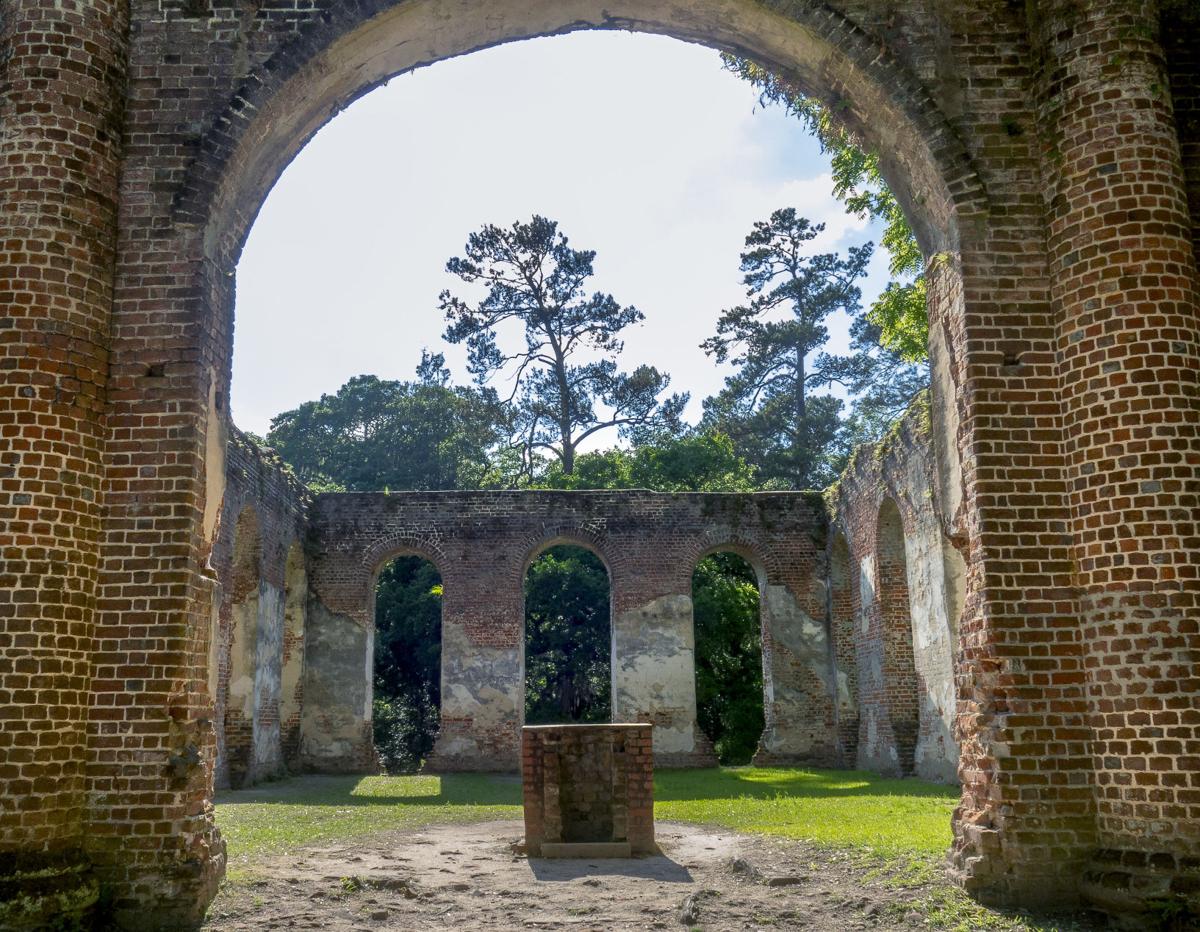 The Old Sheldon Church site is owned and managed by the Parish Church of St. Helena in Beaufort. “The structure experiences a tremendous amount of use and abuse from people who visit the site,” said Kristopher King, the Preservation Society’s executive director. File/Matthew Fortner/Staff

YEMASSEE — Tucked away in a wooded area about a 25-minute drive north of Beaufort, the ruins of the Old Sheldon Church used to stand relatively undisturbed. But Google Maps, social media and write-ups in national publications brought visitors in increasing numbers to the sacred site.

For years, tourists, photographers and wedding parties roamed free through the exposed grounds. Now, a 4-foot black fence wraps around it.

From bricks being stolen as souvenirs, to graffiti scratched into the walls to the overall wear caused by being one of the most popular and accessible historic locales in the region, the site's owners, the Parish Church of St. Helena in Beaufort, felt the ruins needed a chance to recover.

"With the pressure here in the Lowcountry, as a place that so many people want to visit, we understand that these sites have to be protected," the Rev. Shay Gaillard, the parish's rector, said as he stood in front of Old Sheldon Church on Tuesday.

The black barrier, which is dwarfed by the central ruins it now protects, has only been standing since the weekend but quickly drew reactions from people who were surprised — and many disappointed — to see access restricted.

Gaillard said the parish felt the change was necessary to preserve what's there for future generations.

"The structure experiences a tremendous amount of use and abuse from people who visit," said Kristopher King, executive director of the Preservation Society of Charleston.

Although the ruins aren't in danger of collapse, King said the site has been "in an accelerated state of deterioration."

In 2016, the Preservation Society, in partnership with the Clemson Restoration Institute, completed a conditions assessment and conservation plan for the church site. That plan is serving as the foundation of the parish's restoration effort which started taking shape earlier this year, Gaillard said.

The plan outlined a set of recommendations, from tactics to preserve the brick and mortar to strategies for mitigating vandalism, which the report described as the site's "biggest threat."

That includes what the report describes as "casual vandalism," or the unintended damage that happens due to a lack of awareness or understanding of how fragile the structure is.

The fence erected last week differs from the fencing plan recommended in the 2016 study, King said. That plan had suggested building a fenced enclosure "within the existing entrance" along Old Sheldon Road to "control the flow of visitors" onto the grounds, which include the ruins and a large wooded area surrounding it.

The existing barrier, which Gaillard said will be permanent, wraps around the ruins themselves, allowing visitors to walk around it but not enter.

Robb Wells, president and CEO of the greater Beaufort area's tourism bureau, said the Old Sheldon ruins are easily one of the most asked-about sites in the area. With an estimated 80 percent of visitors to the Beaufort area seeking out history specifically, Wells said preservation is "always a concern."

The Old Sheldon Church, originally known as Prince William's Parish Church, was first built in the mid-18th century, before the start of the Revolutionary War. Twice-burned — first by British troops in 1779 and again during the Civil War in 1865 — the church has lain in ruin for more than 150 years.

It's said to be the first conscious attempt in the U.S. to model a structure after a Greek temple. Now, all that's left of the church is its thick walls and Tuscan columns, shaded by moss-draped oaks.

"Even though the gable roof, pediment, windows and interior have long been devastated and wild vegetation surrounds and clings to parts of the walls, the classic simplicity of the Sheldon Church design still remains," reads the 1969 nomination to add the ruins to the National Register of Historic Places.

During the Revolutionary War, the church concealed arms and ammunition and served as a place for troops to drill. It was rebuilt just once, after the first fire, but left as ruins after being set ablaze by Gen. William T. Sherman's troops.

In 1925, the tradition of holding annual services on the second Sunday after Easter began, and, over the years, the ruins became a popular spot for wedding ceremonies.

Beaufort photographer Phil Heim said he immediately drove out to the site with his camera when he found out about the fence. Once he was there, Heim started walking the perimeter and photographing the site as he normally would.

"After a few minutes, I realized that the new fence wasn't nearly as dreadful as I thought it would be," Heim said. "I would say that it doesn't add to the beauty of Old Sheldon, but it also doesn't take away from it either."

Heim noted that local wedding and portrait photographers were likely more upset, since they often shoot their photos inside of the ruins.

Activity like that is often unauthorized, Gaillard said. Just after the fence went up, he said, the parish received an angry phone call from a bride who had planned her wedding ceremony there without asking for permission from the parish.

A large sign just within the entrance to the site tells visitors to ask permission to use the grounds and provides a parish phone number, but visitors "ignore it all the time," Gaillard said.

The parish does hope to provide access to the ruins again, but with the help of docents and designated pathways.

About $5,000 has already been invested in tree work at the site, and much of the vegetation growing on the bricks has been sprayed or removed. Bright motion-detecting lights were also installed so that if anyone walks onto the grounds after dark "they'll know they're not supposed to be here," Gaillard said.

Taking a summer road trip from Charleston? Head to nearby Beaufort

Summer is here, which means sunny weather and road trips with the kids, family or friends.