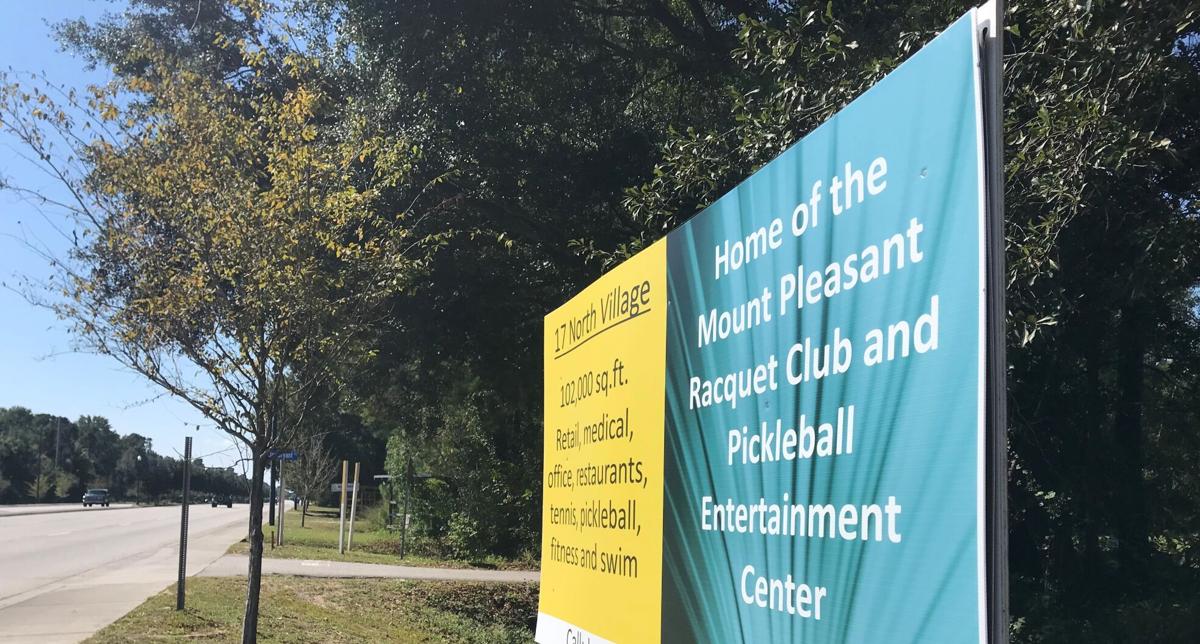 A sign announcing the proposed 17 North Retail Village in northern Mount Pleasant has been posted on the property across from Charleston Fun Park for several months. The proposed square footage of the buildings on the site is now less than the sign says, but the project is now moving forward through the town's review process three years after the owners acquired the property off Joe Bryant Court. Warren L. Wise/Staff 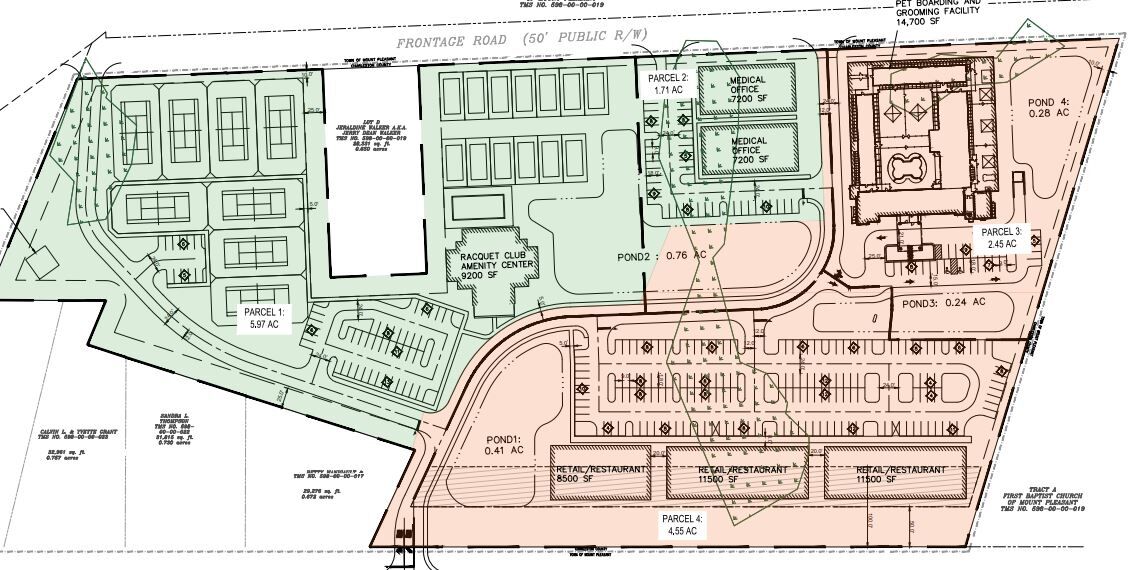 A new mixed-use commercial development called 17 North Retail Village is in the works on U.S. Highway 17 in northern Mount Pleasant across from Charleston Fun Park and Lowe's home improvement store. It includes plans for a racquet club, medical offices, pet grooming and boarding center, and retail and restaurant space. The light brown area is Phase I of development while the light green area Phase II. Bowman Consulting Group/Town of Mount Pleasant/Provided 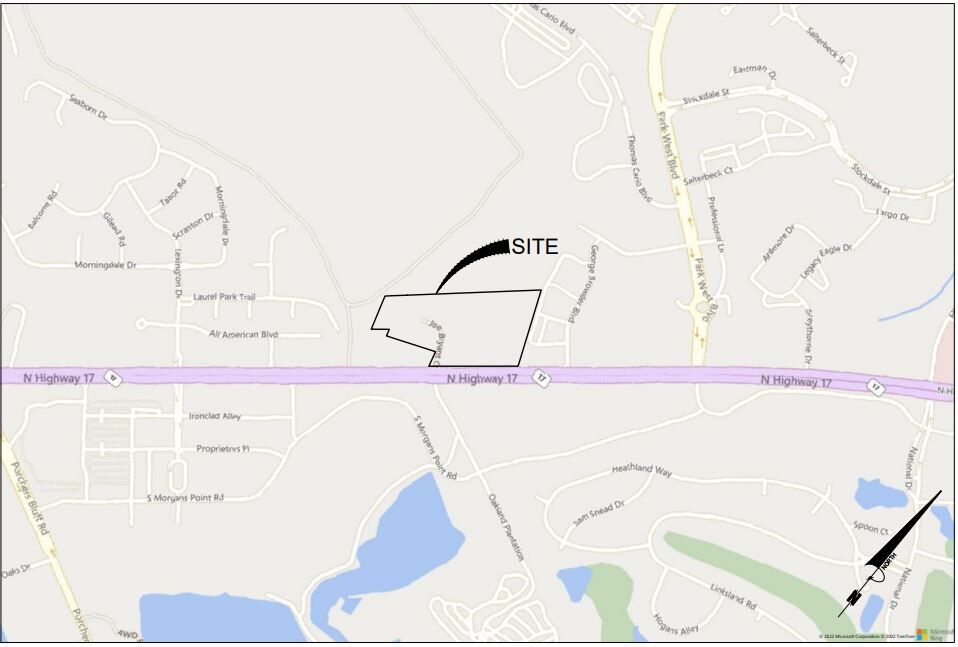 A new mixed-use commercial center on U.S. Highway 17 in northern Mount Pleasant. The site is north of the Market at Oakland Shopping Center and south of Park West Boulevard. Bowman Consulting Group/Town of Mount Pleasant/Provided 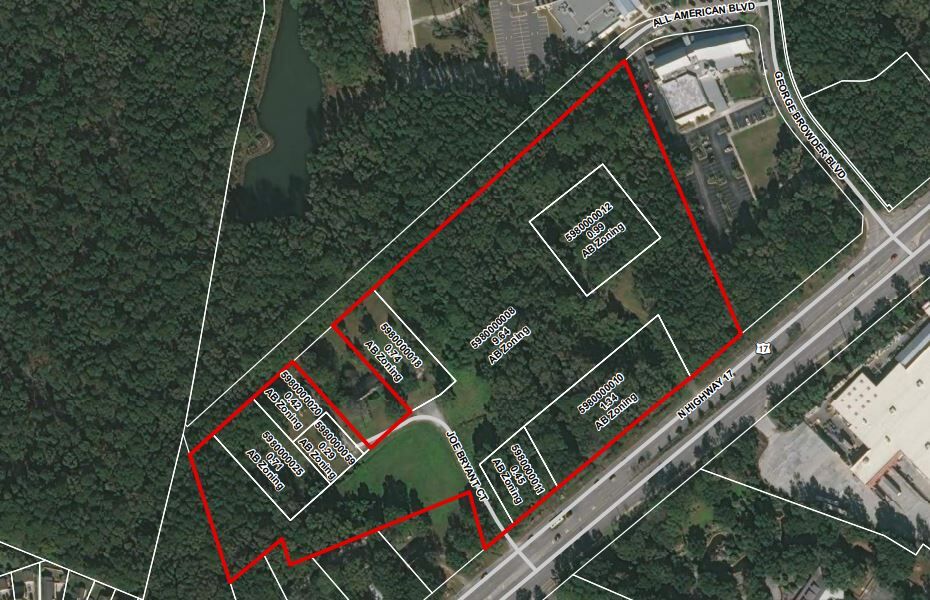 A new mixed-used commercial center is being proposed for the space outlined in red on U.S. Highway 17 in northern Mount Pleasant. Hardware store Lowe's is on the far right across the street. Bowman Consulting Group/Town of Mount Pleasant/Provided

MOUNT PLEASANT — A mixed-used commercial development with retail, restaurants, medical offices, pet spa and tennis and pickleball courts is in the works on 15 acres along U.S. Highway 17 in the northern part of the state's fourth-largest municipality.

Site plans presented to the town show seven proposed structures, including a racquet club amenity center with a fitness site and swimming pool, on the mostly wooded parcel at Joe Bryant Court across from Charleston Fun Park and KOA Campground.

The nearly 70,000-square-foot project does not include a residential component.

Derrick Williams and wife Terry bought the eight-parcel property in 2019 for almost $7 million after a lengthy process of identifying 144 land owners who acquired different parts of the site over many years as heirs property owners.

The previous land owners traced their ancestry back to Cain Bryan, who bought 20 acres in 1875 for $240 when Black land ownership began to flourish in East Cooper after the Civil War. Bryan and several subsequent family members died without leaving wills.

Shortly after purchasing the land, Derrick Williams announced plans in the fall of 2019 for a large racquet club on the property. Before he could move forward, the COVID-19 outbreak sidelined the venture.

Charleston grocer to close after 48 years; downtown bookstore to go dark after 37 years

"It was something nobody expected, and it was devastating to us," Williams said. "Everybody pulled back. The banks didn't know what to do, and it was on hold for about two years. We are now trying to make up for lost time as fast as we can."

He said commitments are already in hand for part of the property, and he expects the project to begin making headway by the end of the year with land clearing.

Among those lined up for the site is Pet Paradise Resort and Day Spa, Williams said. The Jacksonville-based business is expected to move into an estimated 14,700-square-foot building on a corner of the parcel near the Church at LifePark.

At least one of the two 7,200-square-foot medical office buildings planned just south of the pet-care center is under contract for a doctor's office, he said.

The medical office site could become one two-story structure since the final scope has not been determined, said Joyce Beach of commercial real estate firm CBRE, which is handling the property for Williams.

"We also have five letters of intent for the restaurant and retail space near the highway," Williams said. "It's about 70 percent leased."

An investors group from Greenville is behind the three road-side retail and restaurant buildings that range from 8,500 square feet to 11,500 square feet. Williams declined to identify the investors.

The property is slated to be developed in two phases. The first $15.4 million phase on the property's northern side will include the pet-care facility and the street-side shops.

If approved by the town, vertical construction could begin in early 2023 and be completed one year later.

Phase 2, at a cost of $13.24 million, will include the medical office structures as well as the racquet club complex. The sports facility will feature a 9,200-square-foot amenity center as well as eight tennis courts and 13 pickleball courts.

Construction could begin by the fall of 2023 and be completed one year later if all goes as planned.

Williams is hopeful the timeline for the latter phase will be moved up so construction of both phases will partially overlap.

The site also includes 299 parking spaces, and the developer is asking for a reduction in the roadside buffer from 100 feet to 50 feet, with the undisturbed area remaining as "densely wooded vegetation."

Plans also refer to the town's plans to build All America Boulevard across the back side of the site, with construction starting in 2025. It would run from The Church at LifePark to existing residential development southeast of the site.

The new mixed-use development plans to tie into the new road with three access points. The project includes one entry and exit off U.S. 17.

The proposed project is expected to go before the Mount Pleasant Planning Commission in June.

"All and all I'm grateful we are moving forward and things will be wrapped up as soon as possible," Williams said.