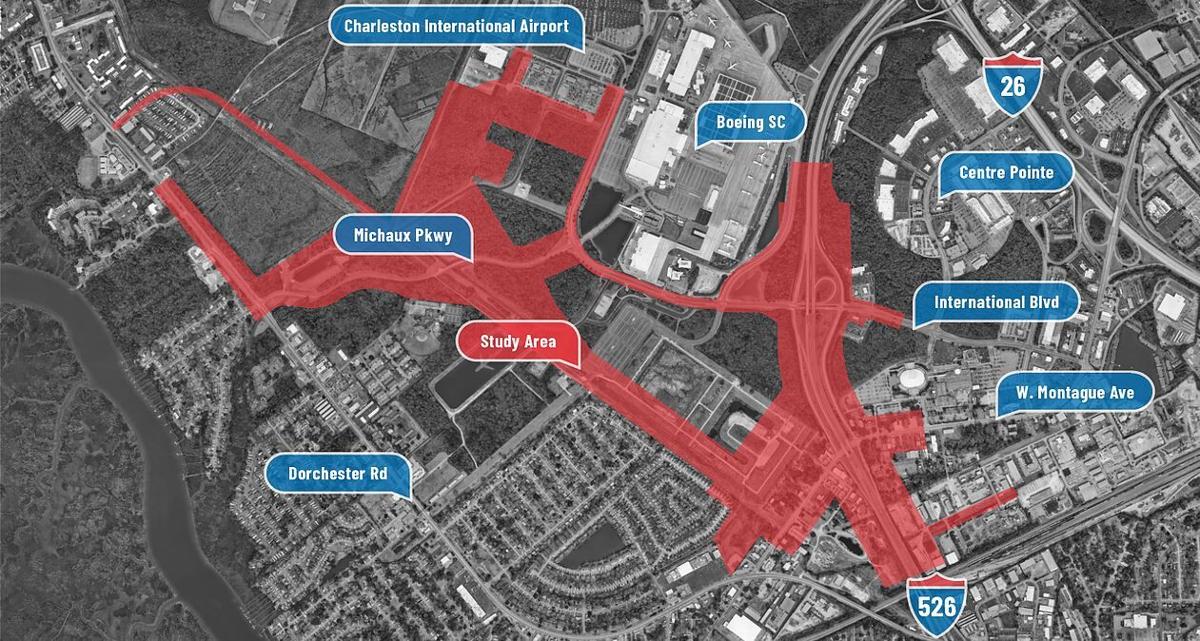 The shaded area shows the proposed route of a new access road to Charleston International Airport and a new interchange that will connect it to Interstate 526. Provided/Charleston County 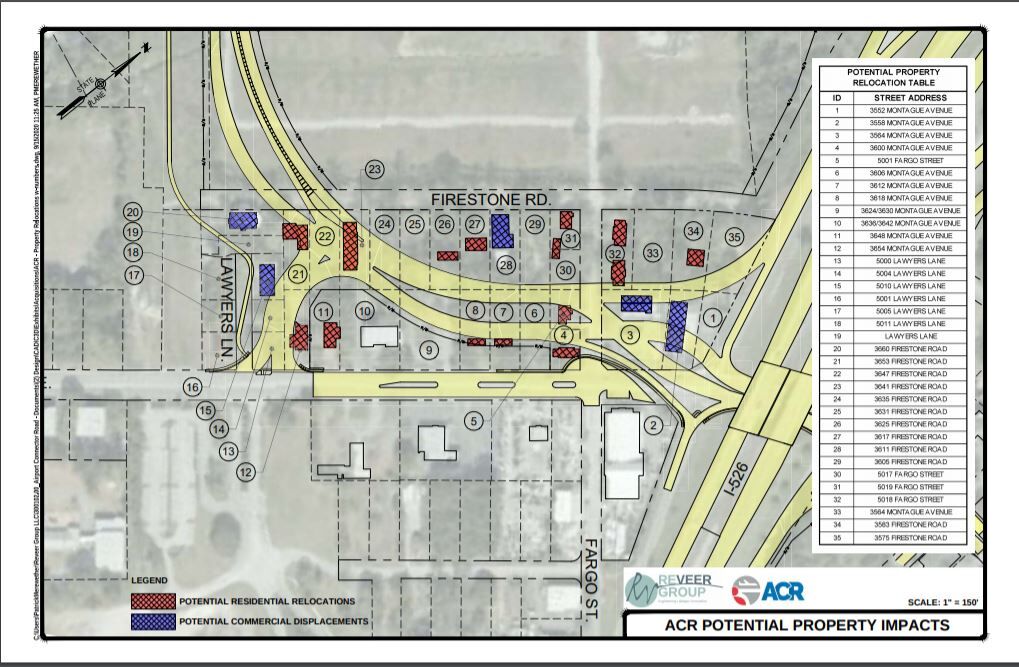 This graphic shows the potential properties that could be relocated or displaced by construction of a proposed new access road to Charleston International Airport and a new interchange at Interstate 526. Provided/Reveer Group/Charleston County

Six years after a new road to Charleston International Airport was first proposed, the $106 million plan could potentially displace a dozen or so homes and businesses but could also spur new development in the area.

JetBlue to launch nonstop flights between Charleston and LA

The proposal involves the construction of a new access road to the airport from Interstate 526, next to a power line beside the former Trailwood Mobile Home Park site now owned by Boeing Co., across Michaux Parkway and onto the airport via Porsche Boulevard.

The final configuration has not been determined, especially the intersection of Michaux Parkway and the new access road, but the projected cost of that part of the access road is $36 million.

The access road also will require a new interchange at I-526 and West Montague Avenue in conjunction with the state Department of Transportation's plan to widen the interstate to either six or eight lanes.

The new interchange would cost an additional $45 million and displace 14 residences and five businesses along Firestone Boulevard, Lawyers Lane and Fargo Street as well as West Montague Avenue in North Charleston.

Other costs associated with engineering, right-of-way acquisition, permitting and inspection bring the total price tag for the project to $106 million, according to Richard Turner, deputy director of Charleston County Public Works.

The new access road is meant to alleviate congestion near the airport by moving traffic off of International Boulevard in front of the Boeing aircraft assembly site.

Many people routinely use International Boulevard and Michaux Parkway as a shortcut between Dorchester Road and I-526, a route that will most likely cease to exist under the proposed new airport access route.

"It provides better mobility in that area," Turner said. "Folks coming and going to the airport are combined with the commuter and Boeing traffic. One of the goals is to separate that."

He also said the new route is more than just a new way to reach the airport because it "includes a lot of work on the interstate" with the planned widening of I-526.

"The projects intersected," Turner said. "We benefit from each other working together, and it will reduce the amount of impact to the area during construction if we can do it all at once."

The proposed route, he said, has minimal impact to homes and private property. Some of the affected sites have been purchased by developers, some are rental properties and some are vacant lots.

"We have already begun some right-of-way acquisition," he said.

He also said the county has stepped in before an alternative route has been officially selected and spoken with some of the property owners about acquiring their real estate after some expressed difficulty in vacating their properties by not being able to sell them.

Turner said another benefit to the project is that it could open up the western side of I-526 near Montague Avenue and Dorchester Road to new investment and development.

"There hasn't been a lot of new development on that side of the interstate," he said. "We expect a spur of redevelopment in that area."

The month-long public input gathering session offers people a chance to review the road plans online instead of the usual in-person meetings because of the coronavirus pandemic. Information offered includes the environmental process and alternatives.

Construction is not expected to begin at the earliest until late 2022 or early 2023.