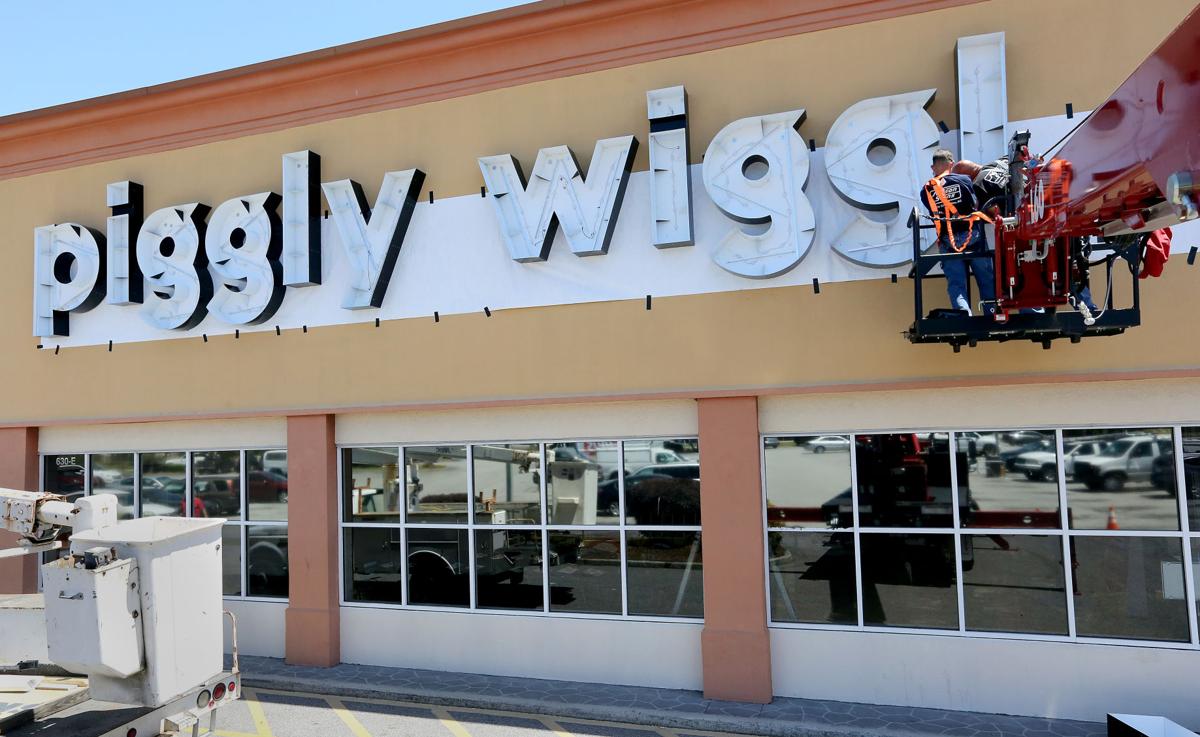 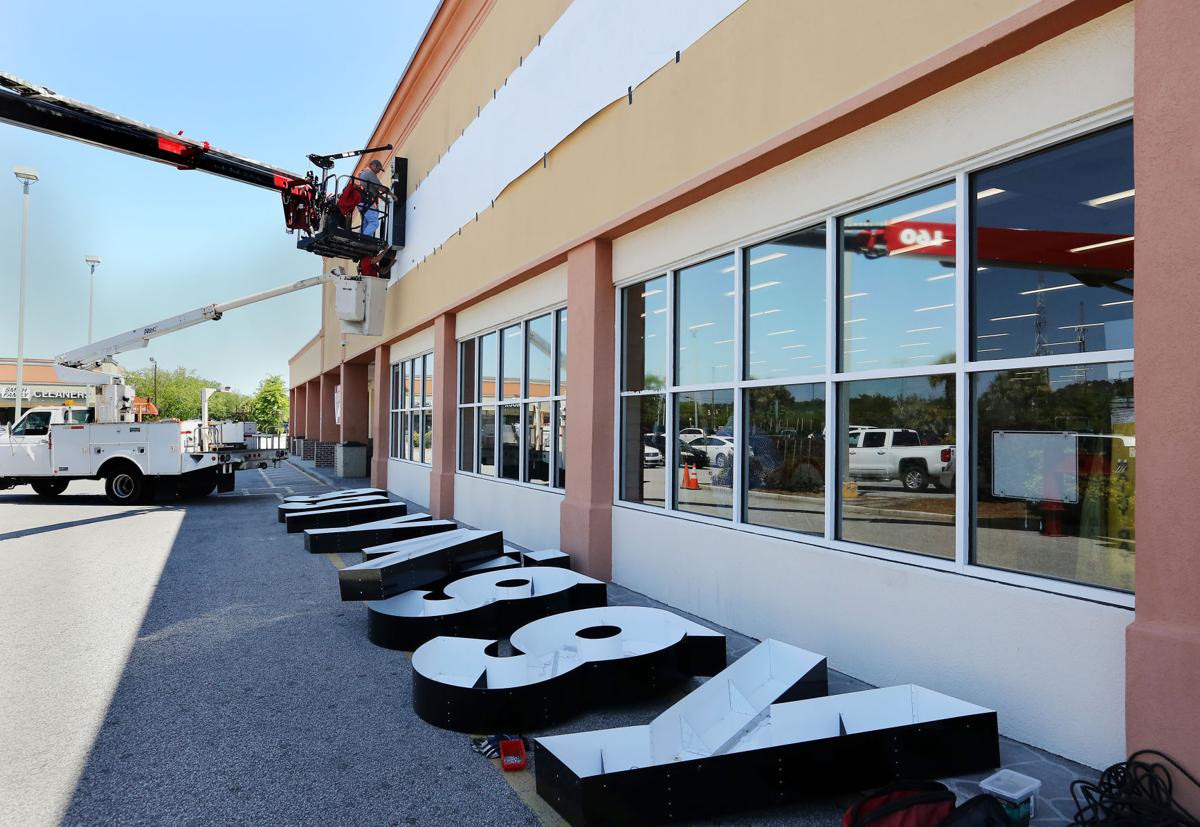 Lettering for the reincarnated Piggly Wiggly store in West Ashley waits to be installed by workers from Nelson Sign Co. of North Charleston early Monday. The former Bi-Lo will reopen Friday as the only Piggly Wiggly supermarket in the city of Charleston. Brad Nettles/Staff 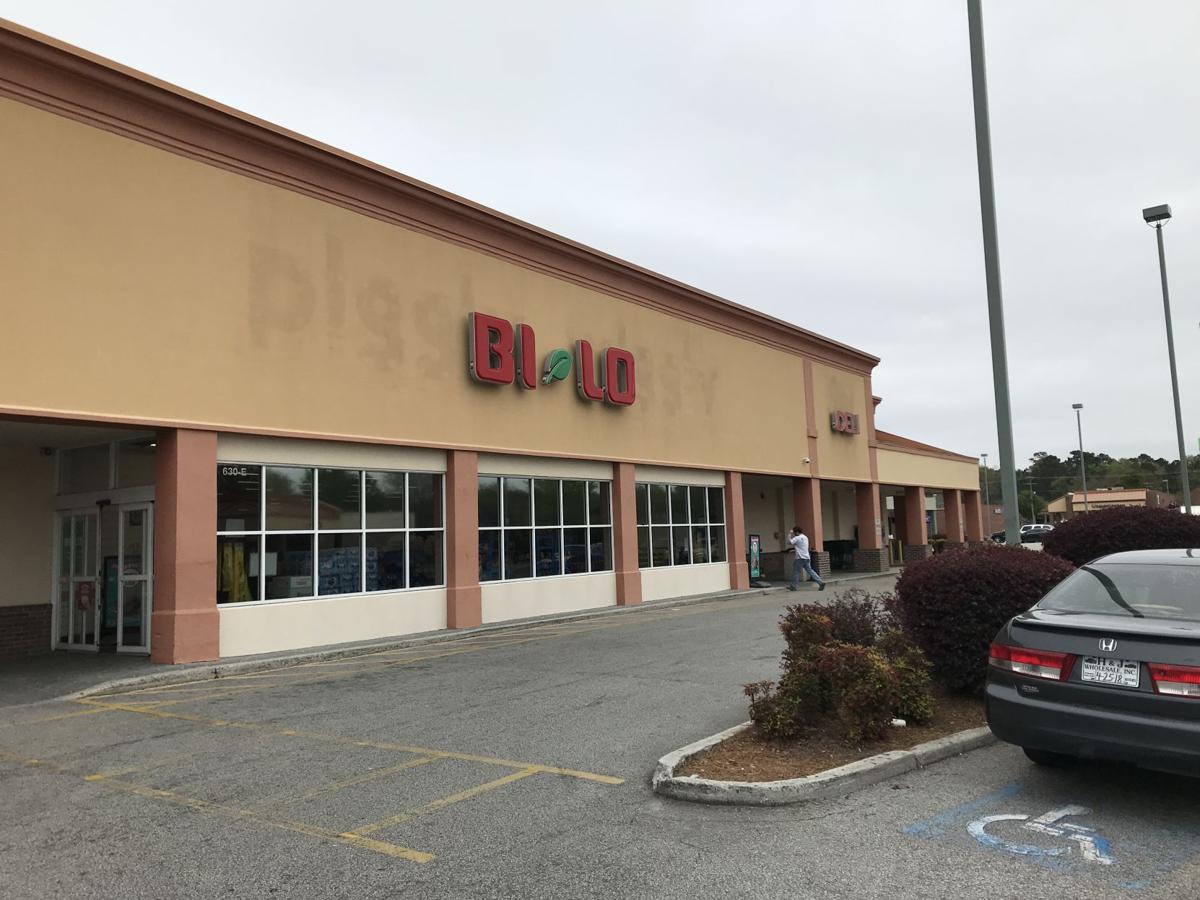 Faded lettering outlines the name of the former Piggly Wiggly grocery store on Skylark Drive in West Ashley. The store became a Bi-Lo in 2013. Now, it will become Piggly Wiggly once again after independent owner David Smith of Goose Creek bought it from ailing Southeastern Grocers. The new Piggly Wiggly name rose on the building's facade Monday. File/Warren L. Wise/Staff

Piggly Wiggly is nudging its way back into Charleston.

Workers on Monday hoisted the iconic brand's lettering into place for the grocer's return to Quadrangle Shopping Center in West Ashley, where The Pig operated for more than two decades before Bi-Lo took over the location in 2013.

The change five years ago stemmed from unraveling of Piggly Wiggly Carolina, which sold the West Ashley store and others to Bi-Lo parent Southeastern Grocers.

Now Southeastern is in financial trouble. The debt-saddled Florida company disposed of the Quadrangle location in March to independent grocery store owners David and Hayley Smith, who also own the Piggly Wiggly in Hollywood, south of Charleston.

Workers removed the Bi-Lo logo from the store's front Thursday.

"They were supposed to do it all at the same time, but Bi-Lo jumped the gun," David Smith said.

The West Ashley store closed early Monday and is expected to reopen early Friday morning, making it the only Piggly Wiggly within the city of Charleston.

New store hours generally will be 6 a.m. to 11 p.m. every day, except Christmas, when the supermarket will be closed.

Customers Monday were in good spirits about Piggly Wiggly returning to the area.

"I missed the Mrs. Mac's fried chicken," said Jerome Smalls, who lives nearby. "It will be good to have it back."

Betty Brown lived in downtown Charleston for years before moving to West Ashley two years ago.

She often shopped at the former Meeting Street Piggly Wiggly, which became Bi-Lo before closing in 2016.

"I like shopping at Piggly Wiggly," she said. "I think they have good bargains on certain things and some things are better."

"I never shopped here when it was The Pig," he said as he clutched a purchase. "Hopefully, it's a good transition. I hear good things."

Among the new offerings at the reborn Piggly Wiggly will be pizza slices and sub sandwiches, Smith said.

He also said the hot line will be different.

"We cook everything from scratch," he said. "We are bringing back Southern cooking."