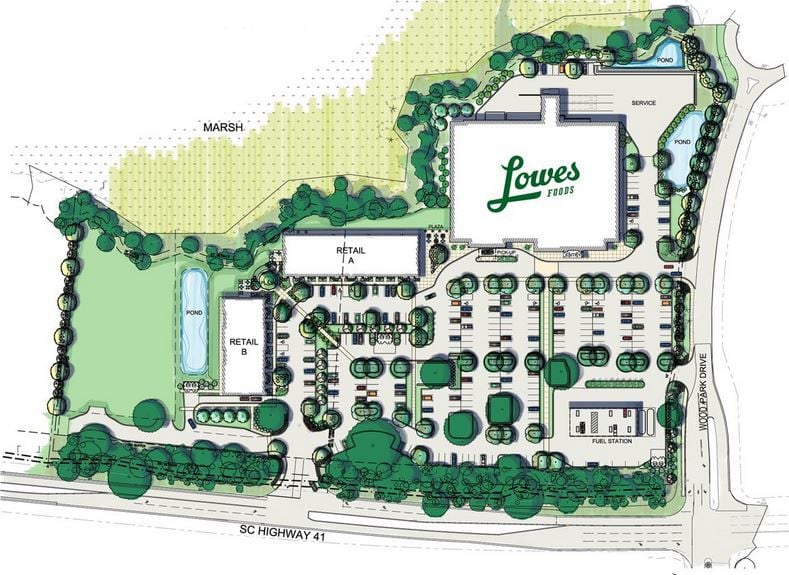 First proposed nearly three years ago, The Market at Mill Creek will be anchored by Lowes Foods at S.C. Highway 41 and Wood Park Drive. The sale of the 16-acre property closed Friday.

The 50,000-square-foot supermarket is set to open early 2019, giving a nearby Harris Teeter store a direct competitor.

Another Lowes Foods is being planned for Mount Pleasant, but the location has not been announced, a spokesman for the North Carolina-based chain said. The grocer is not affiliated with the Lowe's home improvement chain.

The $20-million-plus retail center, a joint project of Charleston-based Adams Property Group and Armada Hoffler Properties of Virginia, will include 24,000 square feet of retail space and a 12-pump fueling station near the entrance to The Gates at Dune West subdivision.

Signed tenants include Marco’s Pizza, Agaves Cantina, Hwy 41 Wine and Spirits, Nail Club and Sea Island Urgent Care. Others are expected to be announced soon, according to the developers.

"The strong demographics and rapid population growth in Mount Pleasant has led to a high demand for retail space in the area, with limited space available to rent," said Jack Coupland of Adams Property Group.

Neighbors on the rapidly developing two-lane Highway 41 had expressed concerns about traffic congestion related to the project after it was first announced, according to Christiane Farrell, assistant town administrator. The road is scheduled to be widened, but work is still at least four years away from starting.

Farrell said the developers worked with the town to alleviate traffic concerns. They agreed to help pay for a new traffic signal, install turning lanes and build other improvements for the intersection next to the future shopping center.

The development also will be shielded from the highway with a 50-foot buffer and include a 35-foot setback from wetlands.

The Mount Pleasant project is one of two new shopping centers announced so far this year in the Lowcountry. North Charleston-based RealtyLink Commercial broke ground a few weeks ago on its $40 million Nexton Square near a fast-growing area of Summerville.