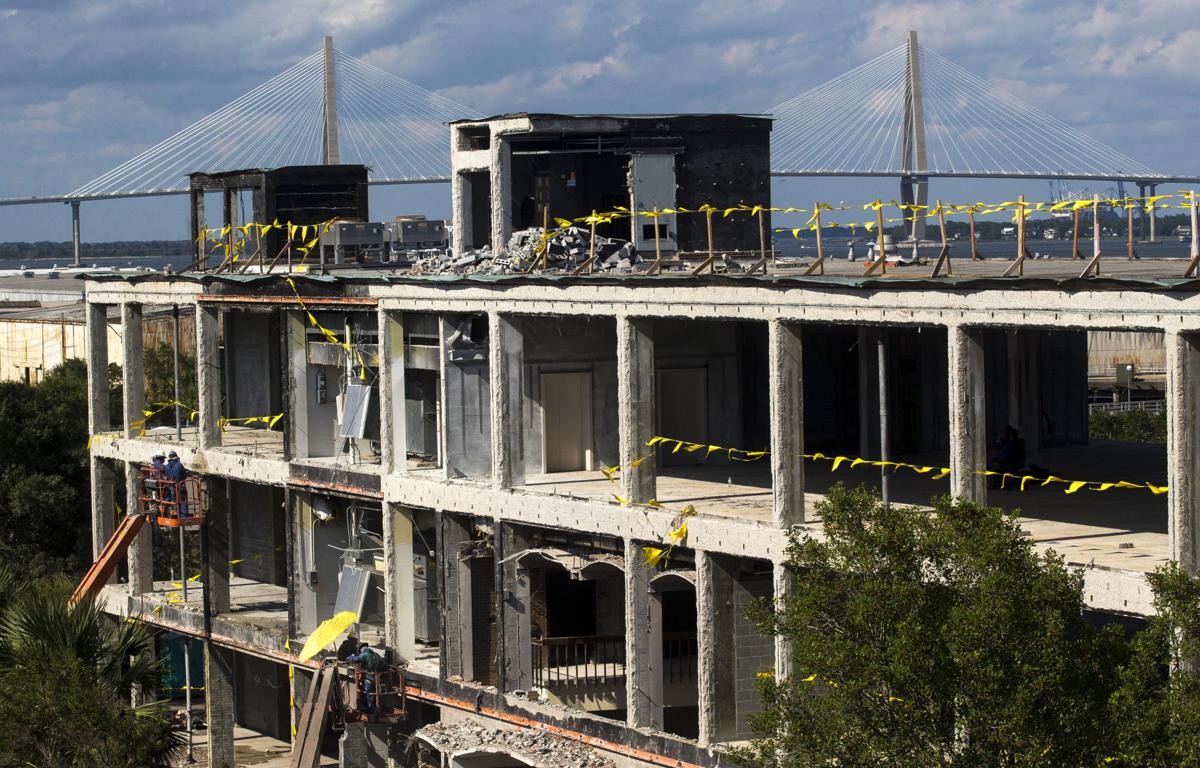 A new hotel will be built at the site of the former State Ports Authority offices near Joe Riley Waterfront Park. Future hotel developments in Charleston will have to meet new requirements. File/Andrew J. Whitaker/Staff 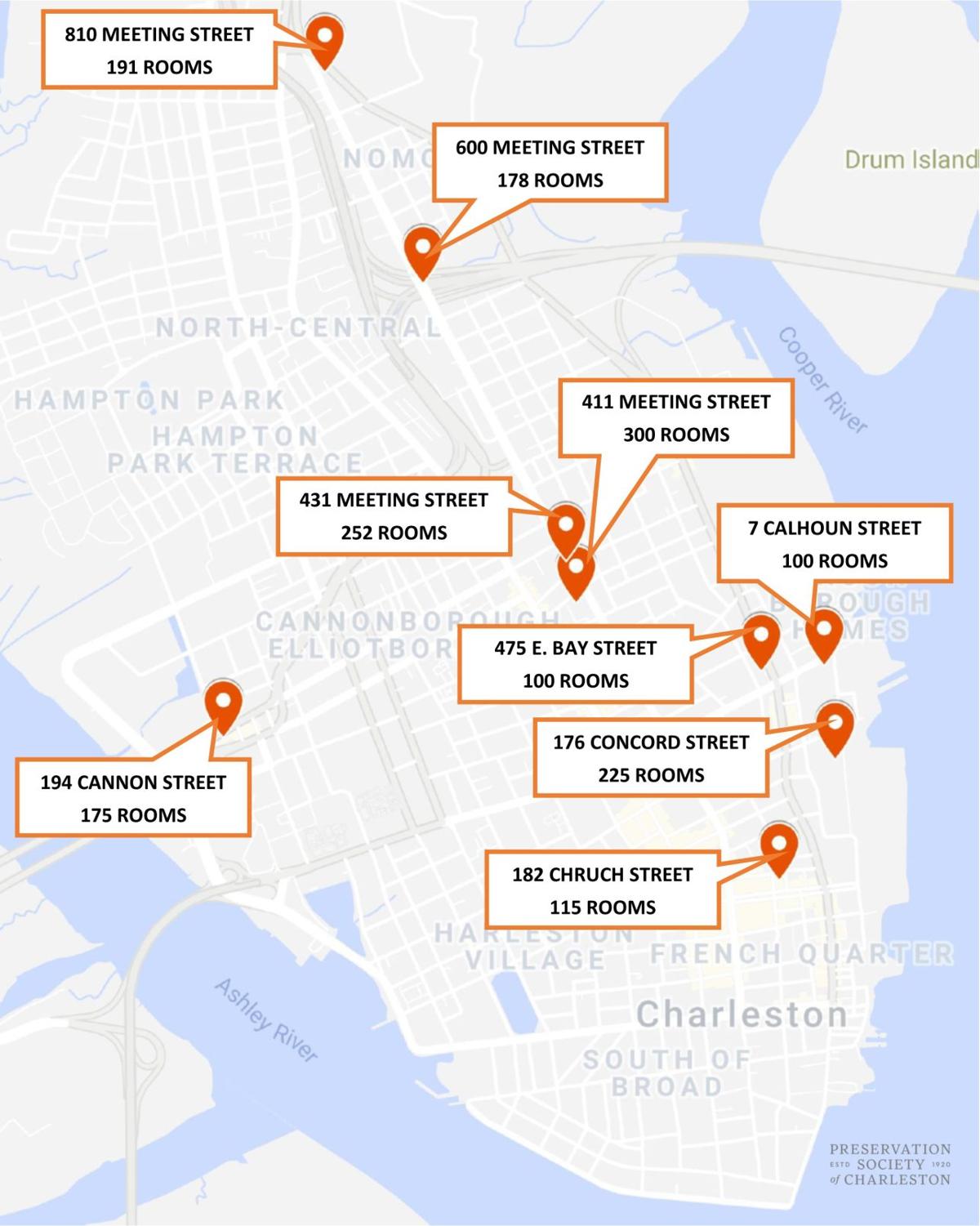 This map shows nine hotels with 100 rooms or more than already have approval from the city of Charleston. Provided/Preservation Society of Charleston

New rules aimed at slowing hotel development in downtown Charleston took another step toward being adopted Tuesday, but one more vote is needed to make them final.

Charleston City Council voted unanimously to give second reading to the ordinance, which was drafted by a task force that has been working on the rule changes since early May.

Council could have given it a third and final reading Tuesday, but it opted to push the last vote until its next meeting.

Mayor John Tecklenburg and Councilman Mike Seekings, who were both on the task force, voted against the delay, as did Councilman Peter Shahid.

At this stage, all new hotel proposals will have to adhere to the stricter rules even though they're not officially adopted, under what's called a pending ordinance doctrine.

"Anybody that comes forward with a new application is going to have to deal with this ordinance," said Councilman Keith Waring, who advocated for delaying the last vote.

Waring and other council members also said they'd like to see a "clean copy" of the rules before final approval. Several changes were proposed and approved Tuesday that required edits and additions to the language.

For example, one of the requirements was amended to clarify that unconventional parking methods, such as automated systems that stack cars on multiple levels to maximize the use of small spaces, are acceptable.

Another section had prohibited developers from building a hotel at a site that housed offices or homes within the previous seven years. Some council members thought that was too long, and a majority supported cutting the figure to five years.

Before the discussion started, city planning director Jacob Lindsey reminded officials about ordinance's three main goals: slowing the development of large hotels downtown, establishing a fee to pay for affordable housing and preventing the displacement of other uses, namely offices, housing and retail.

Several members of the hotel task force urged elected officials to approve it.

"Let's not let perfect be the enemy of the good. Please pass this," said Susan Bass, president of the French Quarter Neighborhood Association.

The task force, which brought together members of city council, preservation and neighborhood groups and tourism industry representatives, sent its first draft of the rules to council in late May.

Before coming back to council again Tuesday, it was reviewed by Planning Commission, city staff and the task force again, all of whom suggested edits and additions.

Also, the task force removed language that would have banned rooftop bars at new hotels. Instead, staff was asked to prepare a separate ordinance to regulate rooftop drinking and dining venues at any type of business.

The task force also reduced the minimum room count for a hotel to 10 from 20. The previous ordinance didn't establish a minimum or maximum, but the new rules set the allowed range at anywhere from 10 to 250 guest rooms.

On most areas of the peninsula, new hotels are limited to boutique properties of 50 rooms or fewer. But in the "full-service box" — an area bound by King, Meeting, Line and Ann streets — developers can build larger hotels if their project meets certain requirements.

Charleston has fewer 'full service' hotels than you may think. Here's why.

Those requirements have been expanded somewhat. The new ordinance requires that, in addition to having an on-site restaurant and 20,000 square feet of meeting space, at least 15,000 square feet of the meeting space must be contiguous. Also, a hotel must offer other services, such as a concierge and a spa, to be considered full service.

Developers of new hotels will also be required to pay the city $5.10 per square foot for guest rooms and adjacent hallways. The money will go toward workforce and affordable housing.

The reason for including the housing fee is explained in the ordinance: While hotels create jobs, "many, if not most, of the jobs created are low-paying, with minimal benefits, heightening the need for housing that is attainable" for hospitality workers.

According to figures provided by the city, the average hospitality worker in Charleston can afford about $600 a month for housing, while the average rent on the peninsula is about $1,300.

The rules will only apply to new hotel applications, so residents can still expect to see lodgings pop up on the peninsula that aren't affected by the rule changes. As long as a development has a special exception from a city zoning board, it's clear to proceed as planned.

That includes a 300-room, full service Bennett Hospitality project on Meeting Street and the 225-room luxury lodging that Los Angeles-based Lowe is building next to Waterfront Park.

According to a map created by the Preservation Society of Charleston, nine downtown hotel projects with 100 rooms or more have already been approved by the city.

The lodging ordinance will come before council again at its Sept. 24 meeting. Tecklenburg and city attorney Frances Cantwell said it was still possible to make some changes before the final vote.

A new hotel celebrated its grand opening in Mount Pleasant last week, and developers hope the property's placement will give it an advantage in the area.

Growth and development help fuel the Charleston area’s booming economy, but it’s important that we balance those economic successes with safeguards against the potential perils of all that progress.