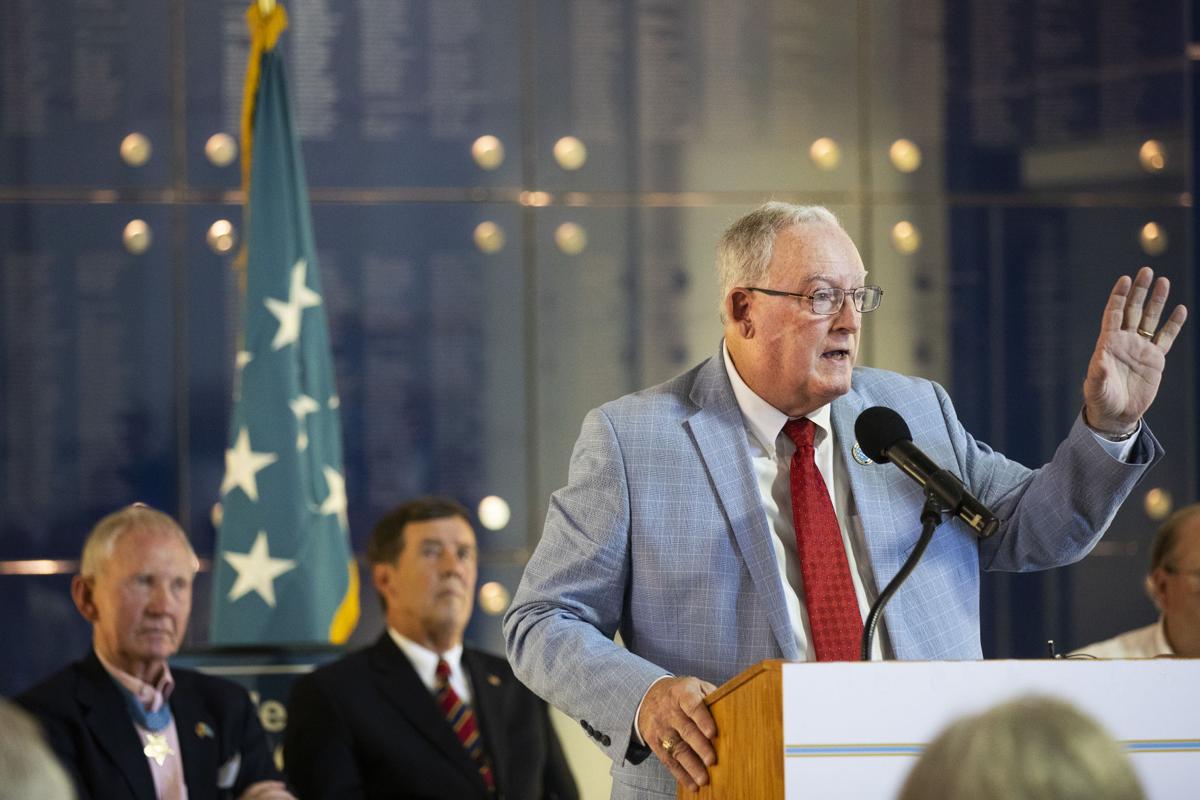 Thomas McQueeney, chairman of the National Medal of Honor Heritage Foundation, speaks during an announcement of a Medal of Honor museum project on the aircraft carrier Yorktown at Patriots Point on Monday, July 29, 2019. File/Lauren Petracca/Staff 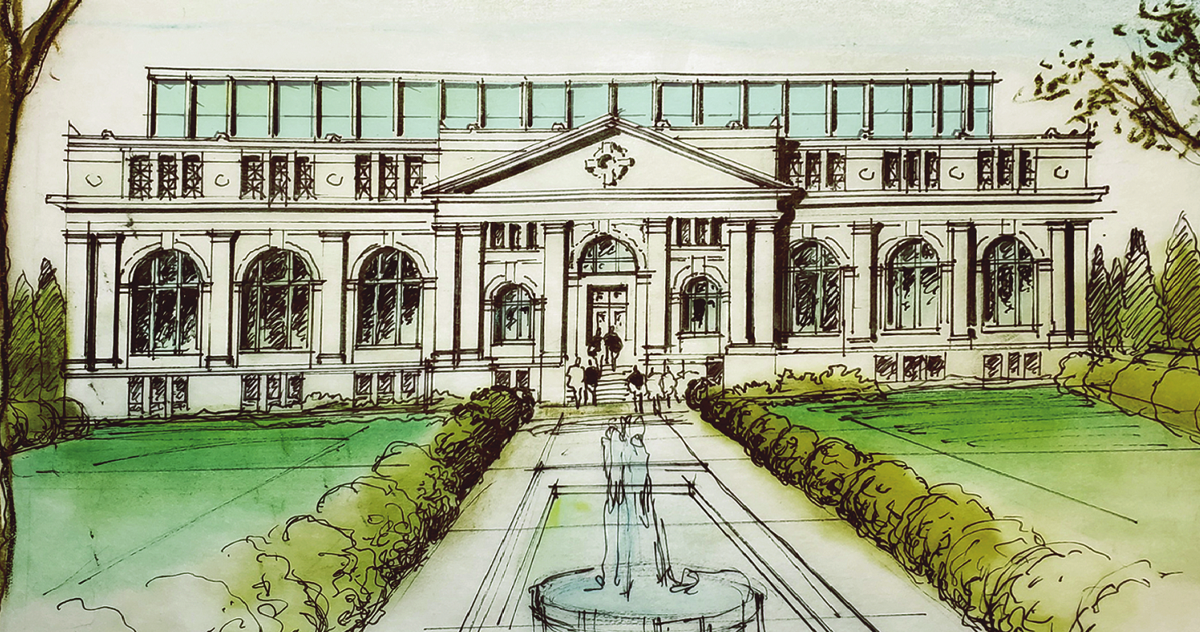 This rendering shows a possible proposal for a Medal of Honor museum in Mount Pleasant at Patriots Point. Reese Vanderbilt and Associates/National Medal of Honor Heritage Foundation/Provided

The town of Mount Pleasant said Tuesday it will give $3 million to a new effort to build a Medal of Honor museum there.

Council members voted unanimously to give an initial contribution of $1.2 million to the National Medal of Honor Heritage Foundation with the remainder of the $3 million — the full amount the nonprofit group had requested — to be distributed over the next three years.

The town's commitment comes a little less than a year after a previous group that planned to build a medal museum at the Patriots Point Naval and Maritime Museum said it was actively searching for other locations.

Medal of Honor Heritage Foundation chairman Thomas McQueeney announced before a crowd of about 100 aboard the aircraft carrier Yorktown late last month that his foundation would open a museum by mid-2023.

That gives the organization just under four years to raise funds — $35 million for the building and another $10 million for furnishings, exhibits and operations — plan the museum, get permits from the town and complete construction.

The group intends to build the facility, which would be called the National Medal of Honor Heritage Center, at Patriots Point, though a formal relationship between the group and the state-owned museum has not yet been established.

The key leaders behind the effort, Medal of Honor recipient Maj. Gen. James Livingston and chairman McQueeney, spoke on behalf of the project at Tuesday night's council meeting.

"This is a right-size museum," McQueeney told council, referencing the $100 million-plus Medal of Honor museum project that was planned for Mount Pleasant but fell apart late last year.

McQueeney has billed the new project as "a museum or your money back." Money that is set aside for construction would not be spent before the building process actually begins.

Under that concept, most of the money the town is committing could be returned if the museum were not to be built, except for $500,000 from the initial donation that the foundation has said it will use to launch fundraising.

At its meeting last week, Mount Pleasant's Finance Committee voted to recommend giving the requested $3 million to the foundation, but committee members had questions about where the money would come from and how Charleston County's contribution would impact its own.

In late May, members of county council voted unanimously to back a request for $5 million to go toward the museum. Council members agreed to give that amount if Mount Pleasant and the state pitched in, too, at $3 million and $5 million, respectively.

That contribution from the county could reduce the amount of accommodations tax money the town of Mount Pleasant receives from Charleston County. That change could apply for the duration of that donation, which is spread over 10 years.

"That's money that would normally come to the town coffers for our projects," said council member Bob Brimmer, who raised concerns Tuesday night about whether the town could afford the proposed contribution.

But council member Kathy Landing said the Finance Committee will be taking up the issue of the accommodations tax allocation with county council, and said that support of the action Tuesday should be viewed as "a separate issue."

The town is able to arrange for about $1.2 million to be available "rather quickly," town administrator Eric DeMoura said, by redirecting and rearranging funds that would have paid for a planned road movement.

Mount Pleasant had previously designated funds to move a section of Patriots Point Road, accommodating the plans for a $100 million waterfront museum facility at Patriots Point, which formally came to an end when the maritime museum terminated its lease agreement with a different nonprofit group.

That organization, headed by CEO Joe Daniels, now plans to build a Medal of Honor museum in either Denver or Arlington, Texas.

McQueeney told committee members that, unlike the previous museum group, his foundation does not think moving the road will be necessary, though his organization is interested in building at the same location.

The planned facility would include the museum, event space and offices for the Congressional Medal of Honor Society — the organization that represents all medal recipients and currently has its headquarters aboard the Yorktown. The facility could also include a chapel, a theater or an art exhibition area.

The Heritage Center group has stressed a willingness to comply with Mount Pleasant's rules and to plan a facility that "fits the nearby architectural elements," according to materials submitted to the town.

The proposed design for the now-defunct Medal of Honor museum project at Patriots Point became a sticking point in the months leading up to the project's unraveling.

McQueeney was recently a member of the Patriots Point Development Authority, the board which will have to oversee and approve all plans for a medal museum on its grounds.

Last month, Patriots Point board members passed new rules for nonprofits that want to start developments there, all of which would apply to the Heritage Center project.

After Medal of Honor museum debacle, Patriots Point has new rules for nonprofits

One requirement calls for a "schedule for regular communication" with Mount Pleasant planning staffers and elected officials. Under the newly-established expectations, if the foundation enters into a lease agreement with Patriots Point, it will be expected to file reports about its communications with the town at least quarterly.

Charleston County has agreed to pony up $5 million in taxpayer dollars over 10 years for a scaled-down Medal of Honor museum at Patriots Point, as long as the state donates $5 million and the town of Mount Pleasant gives $3 million.

From a B-25 to a virtual sub tour, how every SC 5th grader experiences Patriots Point

Though the Clamagore submarine is bound for the ocean floor off South Carolina's coast, students statewide will likely be exploring the vessel long after it's sunk.

This summer, Mount Pleasant Town Council approved a $3 million contribution to a Medal of Honor museum planned for Patriots Point. But the project could end up costing the town a few million more.