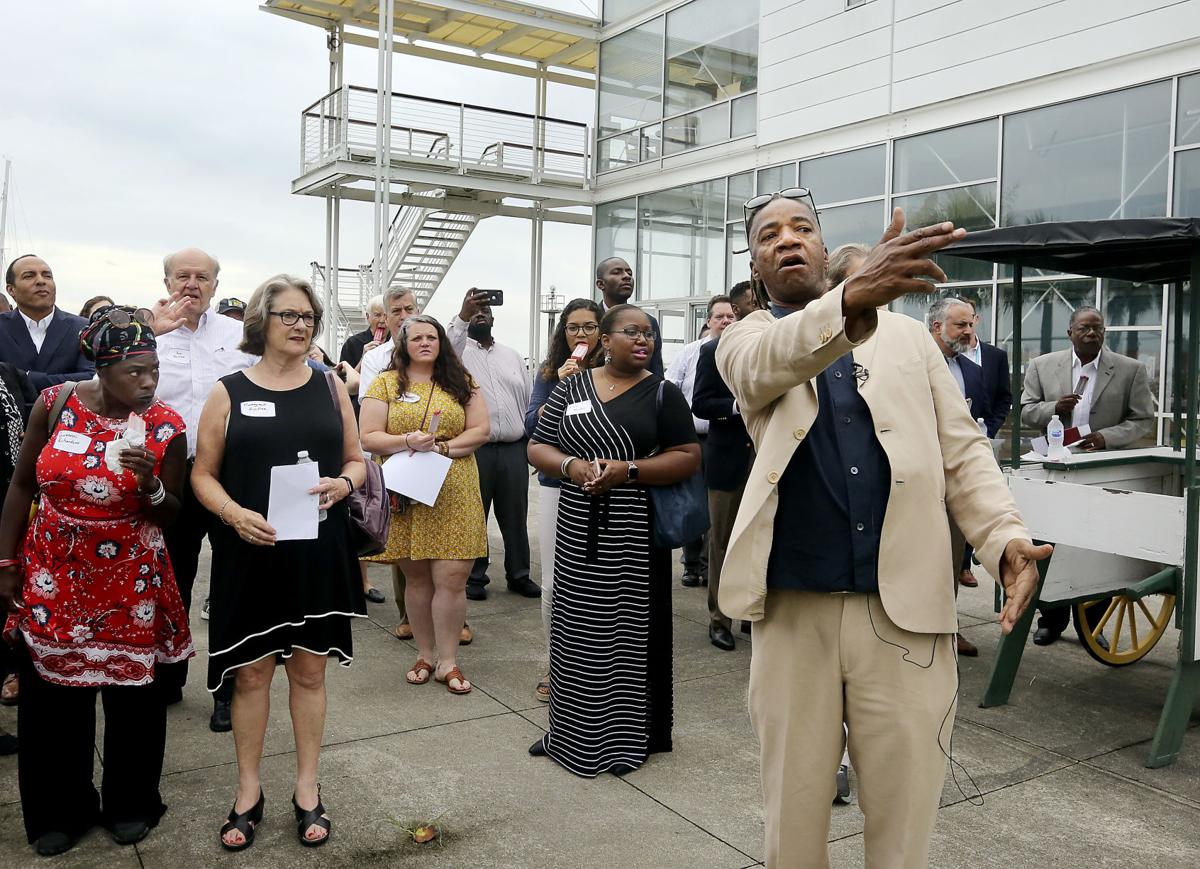 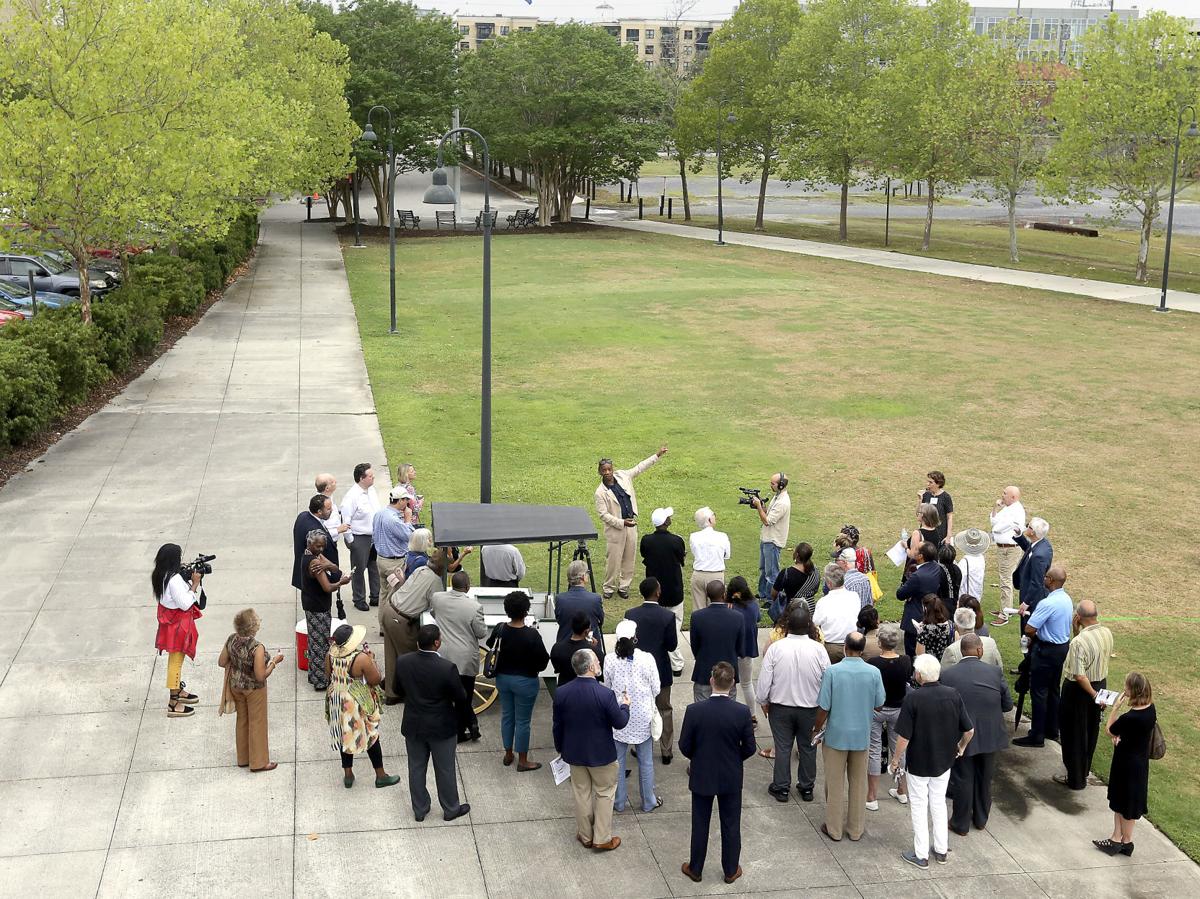 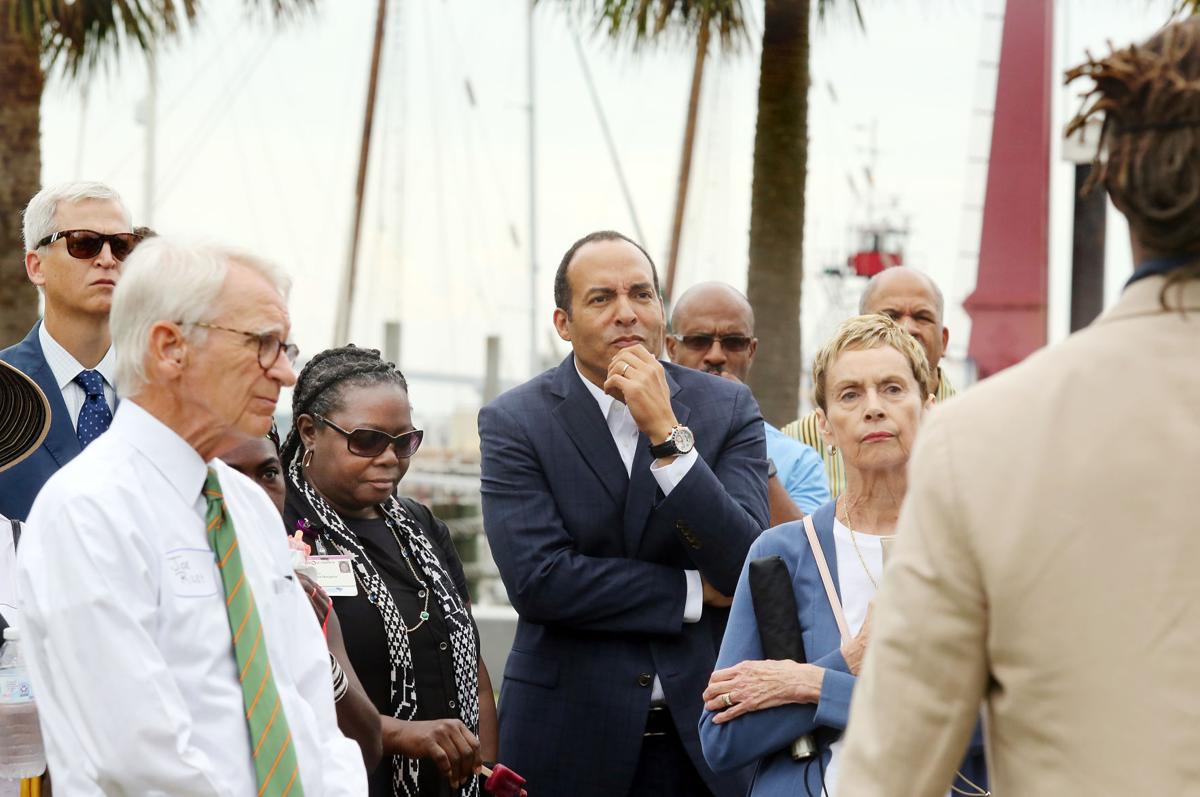 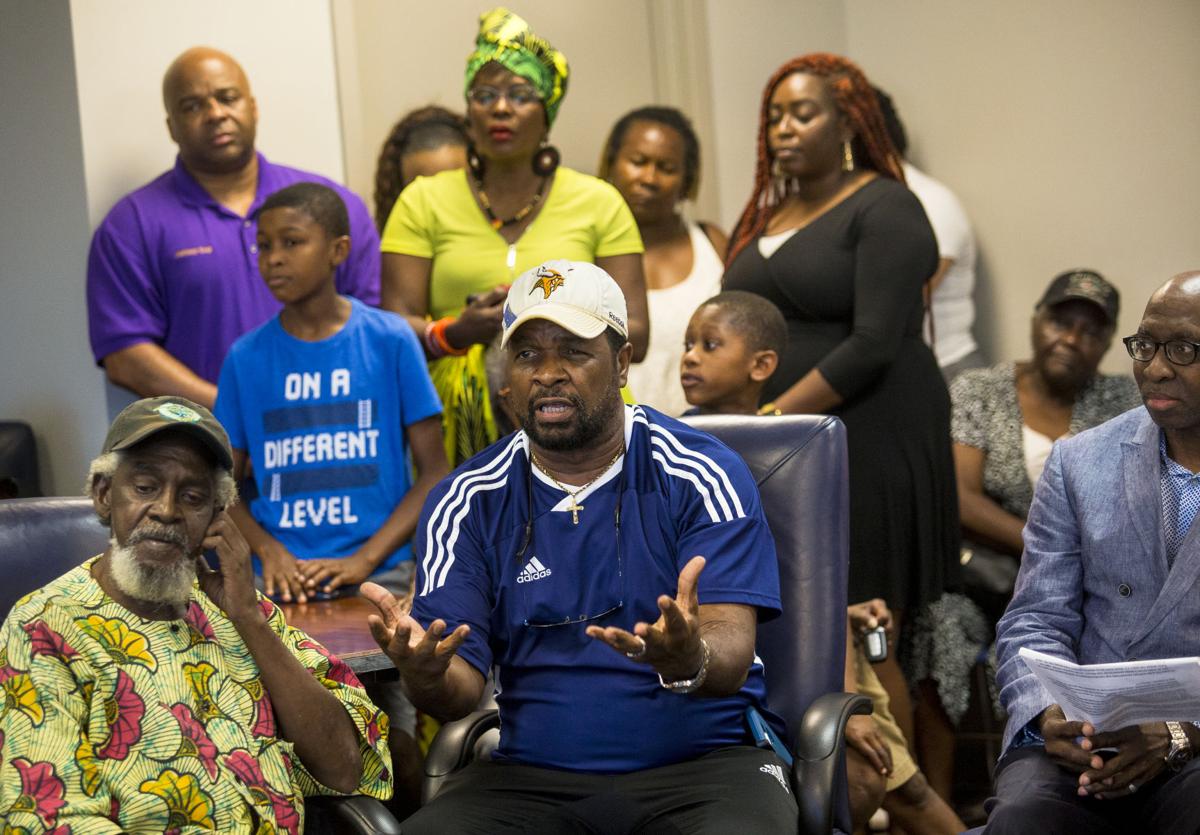 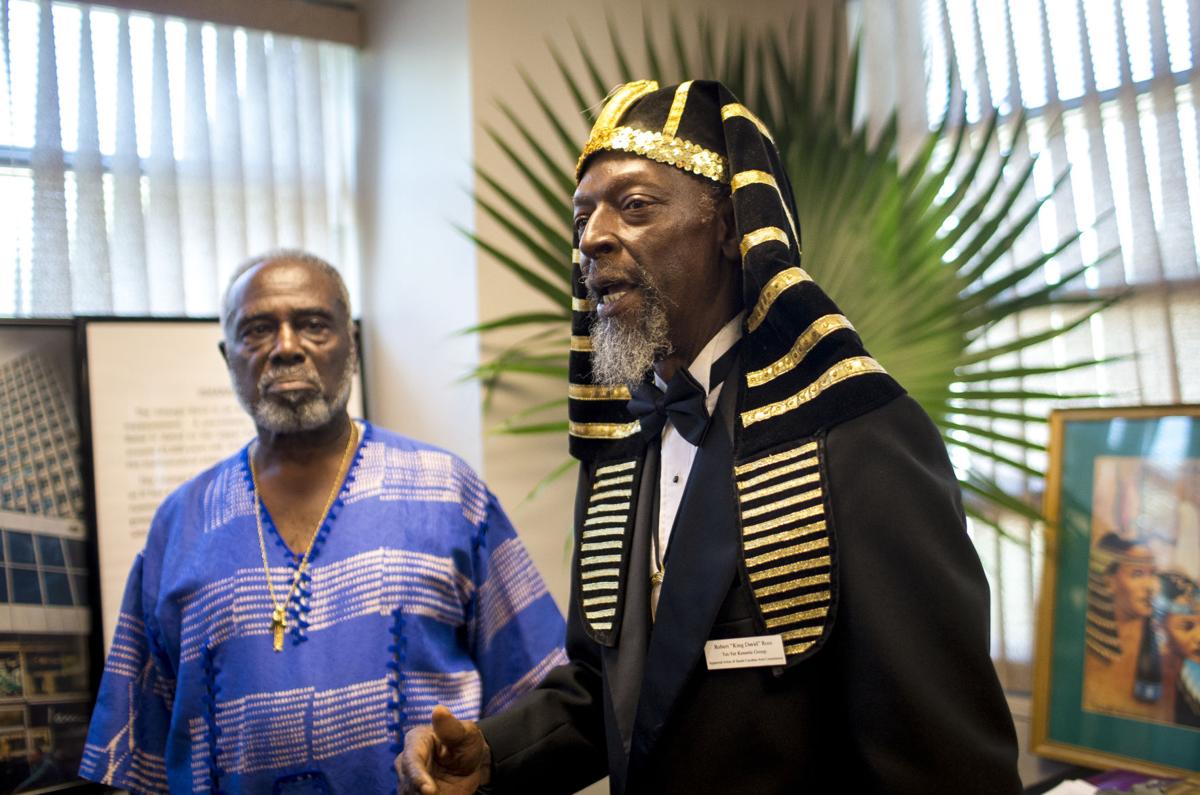 Robert D. Ross (right) and Wilmot Fraser with the Citizens Want Excellence at the International African American Museum compiled a list of 21 questions about the museum building itself along with refraining from wanting to present history mainly through the lens of enslavement but from their entire story during a press conference International Longshoremen's Association on Monday, July 15, 2019 in Charleston. Andrew J. Whitaker/Staff 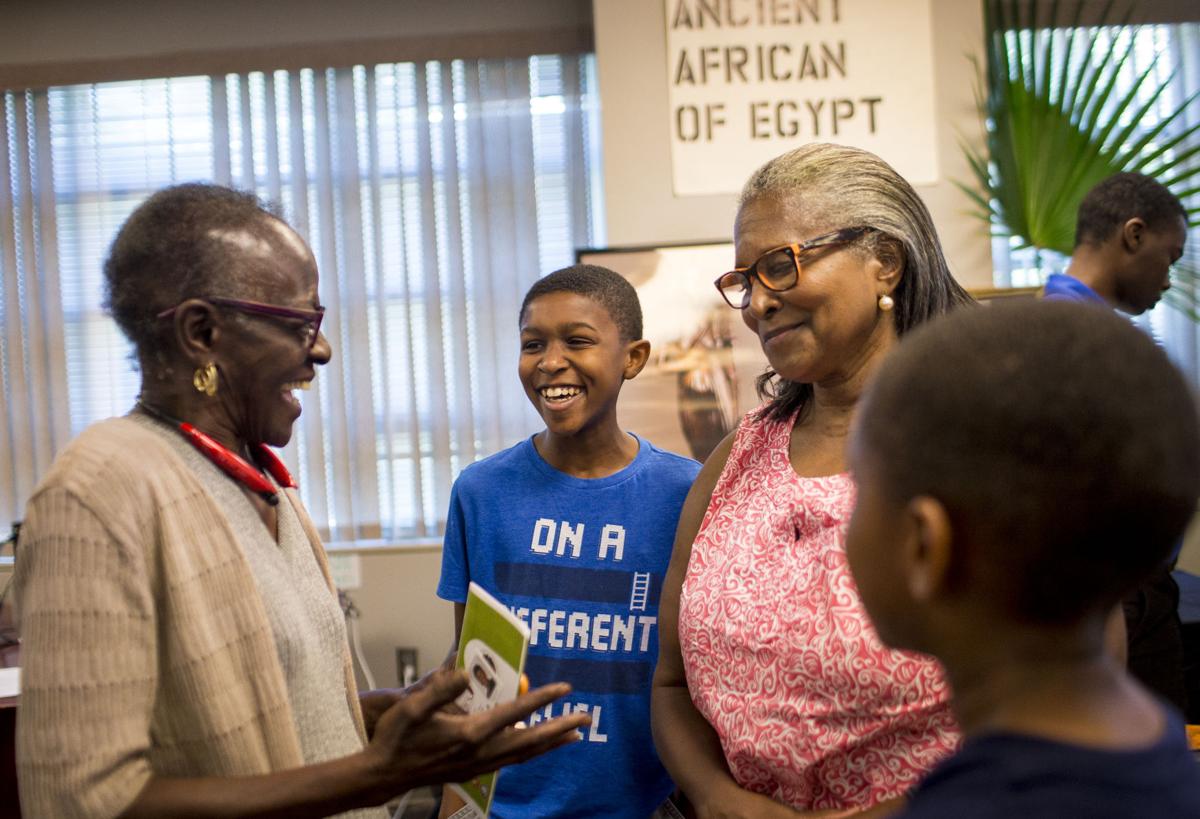 Gwendolyn Robinson, left, is grateful to see younger generations take interest in their own history while talking with Meta Walden and her grandchildren Alex Burton, 7, and Andrew Burton, 11, during a press conference International Longshoremen's Association on Monday, July 15, 2019 in Charleston. Andrew J. Whitaker/Staff

Construction on the International African American Museum is expected to start this summer. Provided rendering

Robert D. Ross (right) and Wilmot Fraser with the Citizens Want Excellence at the International African American Museum compiled a list of 21 questions about the museum building itself along with refraining from wanting to present history mainly through the lens of enslavement but from their entire story during a press conference International Longshoremen's Association on Monday, July 15, 2019 in Charleston. Andrew J. Whitaker/Staff

Gwendolyn Robinson, left, is grateful to see younger generations take interest in their own history while talking with Meta Walden and her grandchildren Alex Burton, 7, and Andrew Burton, 11, during a press conference International Longshoremen's Association on Monday, July 15, 2019 in Charleston. Andrew J. Whitaker/Staff

Construction on the International African American Museum is expected to start this summer. Provided rendering

Charleston's International African American Museum, a project nearly 20 years in the making, will ask the city to approve $60.2 million worth of construction contracts this week, marking one of the final steps before the project breaks ground.

If the items pass, museum leaders plan to start work at the site very soon, with an official groundbreaking in October and opening sometime in 2021.

A local group hopes to put a temporary hold on that process. The "Citizens Want Excellence at IAAM," who gathered several dozen people Monday morning to rally behind their cause, will ask City Council to defer an approval of the contracts until their concerns — some which date back to the project's early years — are addressed.

Former Charleston Mayor Joe Riley first announced plans to build a museum to African American history in Charleston during a speech in 2000.

In the two decades since, upward of $90 million have been raised to build the museum on city-owned land along Charleston Harbor. The site was part of Gadsden's Wharf, a place where thousands of enslaved people arrived in Charleston.

Though the site itself has been a focal point of the museum's messaging, it's also been a cause for concern among the community members gathered Monday.

Wilmot Fraser, who led a presentation of the Citizens for Excellence's demands at the International Longshoremen's Association headquarters, said that the lens of enslavement "is part of but far from" the "whole story" for African Americans.

The group laid out several demands, including:

IAAM leaders met with representatives from the concerned group as recently as June 20, Fraser said, but they felt they had "no assurances" that their concerns were being addressed.

The community group, which has adopted the slogan, "Not about us, without us," has also compiled a list of 21 questions about the museum structure itself, the content planned for its exhibits and the relationship the museum will have with the local African American community.

"To what extent were long-term economic and cultural benefits to African and African American communities considered in IAAM planning?" one question asks.

Another points out the lack of African American-owned businesses near the museum site, which sits between the Charleston Maritime Center and the Dockside condominium complex.

The group is also calling for a greater focus on African history and culture before enslavement, including replicas of the Ishango Bone, a 20,000-year-old baboon fibula with a series of carvings that was discovered in Africa’s Great Lakes area. The bone serves as evidence that mathematics originated there.

Bernard Powers, a professor emeritus at the College of Charleston and an IAAM board member since the body's inception, said Monday that he's confident the museum has "broad support in the community."

Riley said IAAM board members and staff have collected local input and feedback over 40 community events and about 70 meetings over the life of the project.

"We've had a huge amount of community input and participation," Riley said. "That input shaped the museum."

Just as the IAAM transitions into its first phase of construction, the organization will also see a major leadership change. Last month, Moore announced that he would leave his role Aug. 2 and return to work in the private sector.

Board member Powers will serve as interim CEO, and Chief Operating Officer Elijah Heyward will take over some of Moore's day-to-day management responsibilities.

The IAAM board will form a search committee to find Moore's replacement soon.

"The next person for this phase is going to be a museum professional," Powers said. Moore did not have museum experience before working with the IAAM.

Moore was in his role for a couple years before the museum brought on key leaders like the chief operating officer, chief curator and director of education and engagement, all of whom were hired in 2018.

Having that base of key staffers should help with the leadership transition, Powers said.

Just last week, the museum announced the selection of another key leader for its construction phase. Bernice Chu, the founding director at the James Museum of Western and Wildlife Art in St. Petersburg, Fla., will oversee planning and operations for the IAAM throughout its construction and for at least six months after its opening.

"The team I've met there is top-notch," Chu said of her soon-to-be colleagues. "There's a collaborative, synergistic energy."

Tuesday's council agenda includes about 300 pages of documents related to contracts that need city approval before the museum can break ground.

That includes an agreement that lays out the basic steps of the construction process at the waterfront museum property, which has been leased to the IAAM by the city since December 2015.

Construction will be done in two main phases, a "building shell" phase, which includes the construction of the structure itself, and the "interior uplift," which includes all of the museum installations and exhibits. The contracts that will be reviewed Tuesday only apply to phase one.

The city is using the construction manager at risk method, the same strategy that was used to renovate the Gaillard Center. The method, according to Deputy Director of Capital Projects Edmund Most, allows the contractor more flexibility to maximize the number of minority- and women-owned subcontractors.

It also delivers a guaranteed maximum price for the project.

When contractor Turner-Brownstone submitted its cost estimate for the project earlier this year, the figure was well above the original budget, prompting the museum to look for ways to adjust its construction drawings and reduce the final cost.

A final bid of $58.46 million was submitted July 1, according to a memorandum from Most.

Other contracts related to the first phase of construction, including project management services and electrical work, total $1.78 million.

City Council will review the agreements Tuesday, first in its Ways and Means Committee session, which begins at 4:30 p.m. This week's meeting will be held at Crosstowne Church on Bees Ferry Road.

It's unclear how council will respond to community members' request to defer a vote on the contracts. No council members attended Monday's meeting.

The Citizens Want Excellence group has urged anyone who shares their concerns to come to the meeting and be heard.