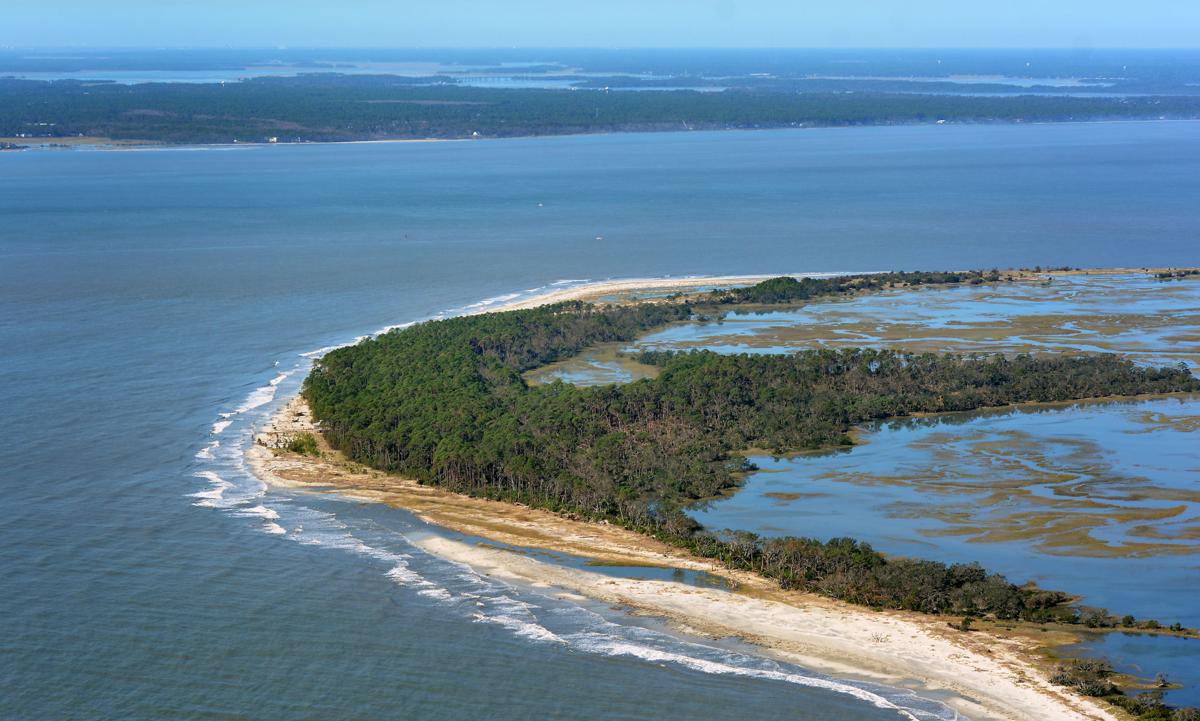 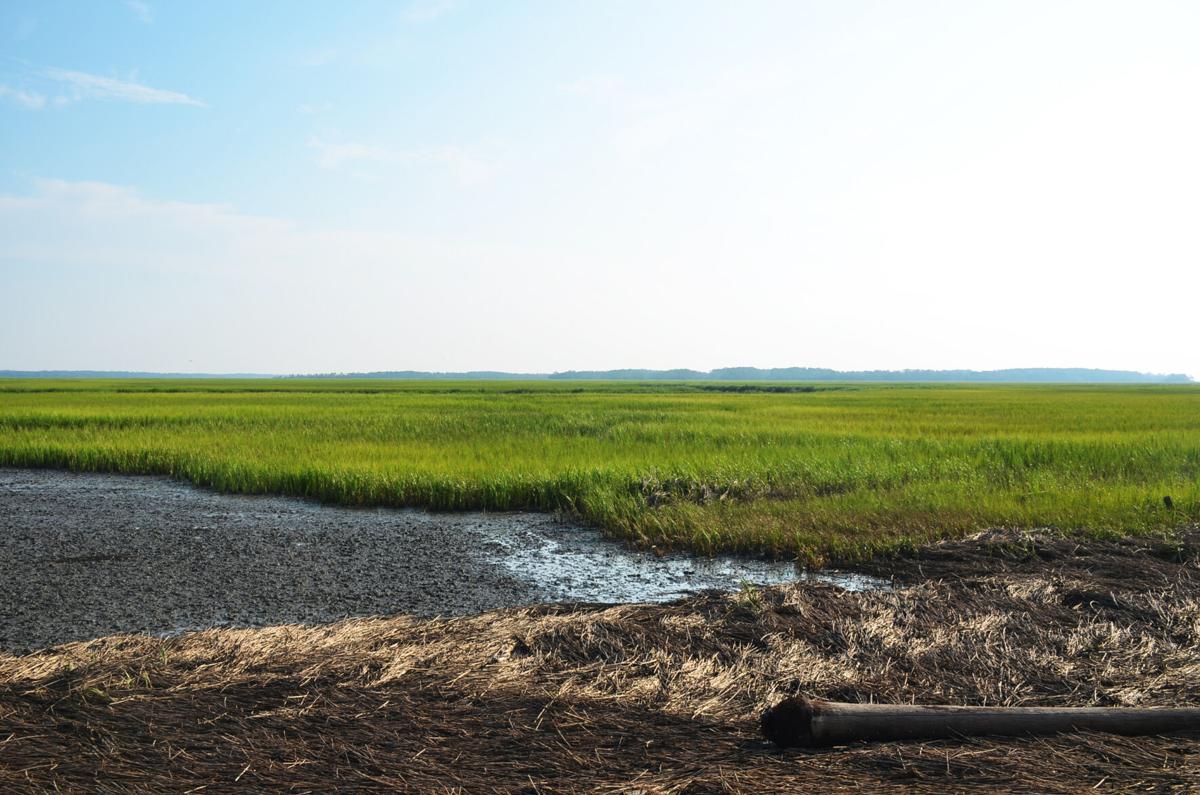 Developers are seeking to build a high-end resort on Bay Point Island which is currently uninhabited and zoned as a natural preserve. Beaufort County law allows for tourist accommodations to be built there if they meed the definition of "ecotourism." Bay Point Island LLC/Provided

Gov. Henry McMaster is calling on a Lowcountry zoning board to reject plans to build a luxury resort on an undeveloped barrier island.

The development could have a "detrimental impact" on the state's natural resources and some South Carolina taxpayers, McMaster wrote in a letter Tuesday to the Beaufort County Zoning Board of Appeals.

Resort plans, which are being submitted as an "ecotourism" use, are slated for Bay Point Island, just northeast of Hilton Head in Beaufort County. It's only accessible by boat or aircraft and is zoned as a natural preserve.

For any tourist accommodations to be built there, the plans have to square with the principles of ecotourism, according to county rules. In his letter, McMaster argued that the proposed resort was "plainly inconsistent" with those requirements.

"Quite simply, I don't think such developments are what our people had in mind when they envisioned 'ecotourism,'" the letter said.

A spokesman for the development group said Wednesday that they remain confident their plans meet all of Beaufort County's requirements to qualify as ecotourism.

The island's owners are seeking to build 50 villas, wellness centers, dining venues and an “earth lab” and cooking school.

Thailand-based luxury resort operator Six Senses has been named as their intended collaborator. The resort as planned would cost about $100 million to build.

McMaster's letter called out potential issues that local groups have raised alarms about for months, including Bay Point's status as a nesting habitat for sea turtles and an Audubon-designated Important Bird Area.

He also addressed the island's vulnerability to erosion, which has been a key issue raised by environmental groups like the Coastal Conservation League and the South Carolina Environmental Law Project.

Concerns have been raised about the infrastructure needed to support the resort, given that there is no development there now. McMaster said in his letter that the energy, sewage and water needs of the resort were not "sufficiently accounted for" in the developers' proposal to the county.

Commentary: Bay Point Island is no place to put a resort

"Beaufort County residents could end up paying for the tremendous beach management costs resulting from erosion, as well as the emergency services necessary to constructing such a project," the governor wrote.

Some members of the native Gullah-Geechee community, who have used the waters around Bay Point as a fishing ground for generations, have also asked for a rejection of the resort plans.

An online petition started by the Gullah/Geechee Sea Island Coalition has continued to draw more signatures in the months since it was first posted late last year. About 3,000 people have signed in the last several weeks for a total of more than 24,200 signatures as of Wednesday afternoon.

McMaster wrote in his letter this week that he agrees with the statements made by Marquetta Goodwine — who goes by Queen Quet, chieftess of the Gullah/Geechee Nation — about the potential damage the development could cause to her community.

"This is a living history we do not want to lose," McMaster wrote.

The developers behind the proposed resort, who include longtime island owner Philippe Cahen, Bluffton landscape architect Josh K. Tiller and Tim Pitcher and Art Krebs of Louisville, Ky.-based Luckett and Farley Development LLC, have maintained that their plans are true "ecotourism" that will have a minimal impact on the island and its wildlife.

Tom Taylor, a Hilton Head Island-based attorney who is representing the Bay Point owners, said Wednesday that he felt the governor's letter was "unfortunately misinformed."

Taylor cited, for example, that McMaster's letter referenced the number of villas as 60 when the correct number is 50. Taylor also noted that Beaufort County staff has said the resort plans meet their definition of ecotourism.

That decision came a few months after Beaufort County community development director Eric Greenway wrote in December that, "after careful review," he had found the plans didn't qualify as ecotourism.

A revised proposal was later submitted to the county with the help of Jon Bruno, executive director of the International Ecotourism Society, or TIES.

The county's rules credit TIES with writing the ecotourism definition they use: “responsible travel to natural areas that conserves the environment, sustains the well-being of the local people, and involves interpretation and education.” 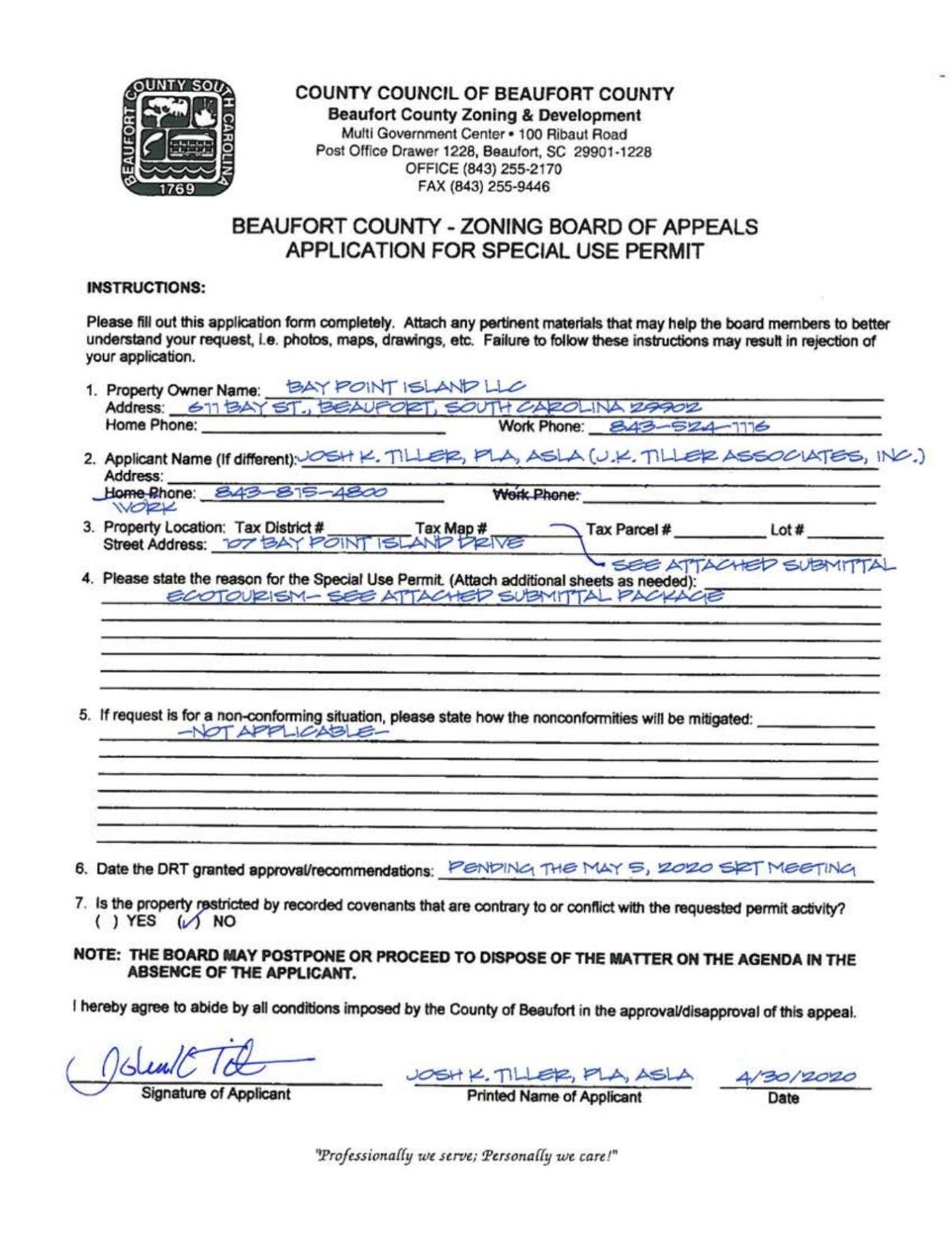 Bruno, who said he was paid his expenses and a daily rate to help the developers earlier this year to "fix up the communications materials," signed a letter to the county saying the resort plans aligned with TIES standards.

Greenway wrote a letter to the developers in mid-March letting them know that the Bay Point plan could be called ecotourism, "based upon the work and confirmation by" Bruno.

Taylor said he encourages community members to review the resort proposal, which he described as "highly detailed."

The Beaufort County Zoning Board of Appeals was scheduled to review the Bay Point plans last month, but that meeting was postponed. The board's August meeting was also canceled, so the resort proposal will, at the earliest, be up for a vote in late September.