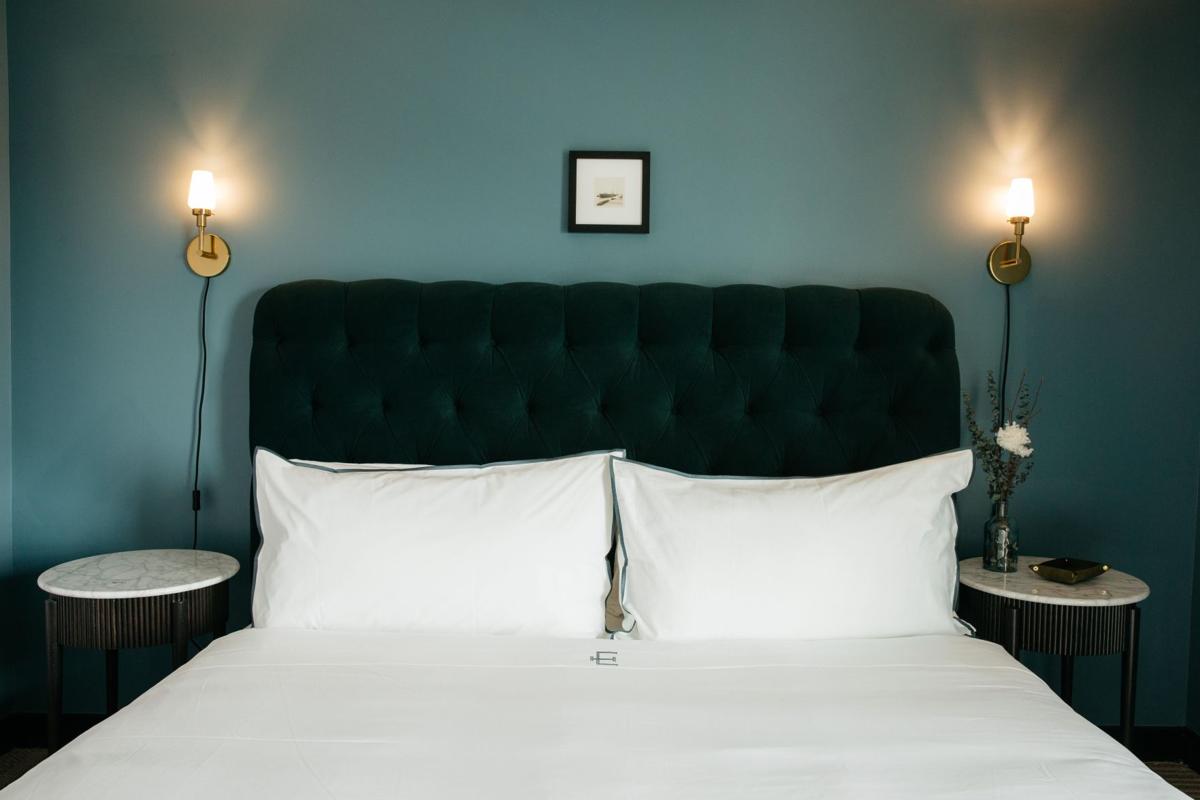 A guest room at Emeline, a new hotel concept that opens July 1 in the former downtown Charleston DoubleTree on Church Street. Provided/Emeline 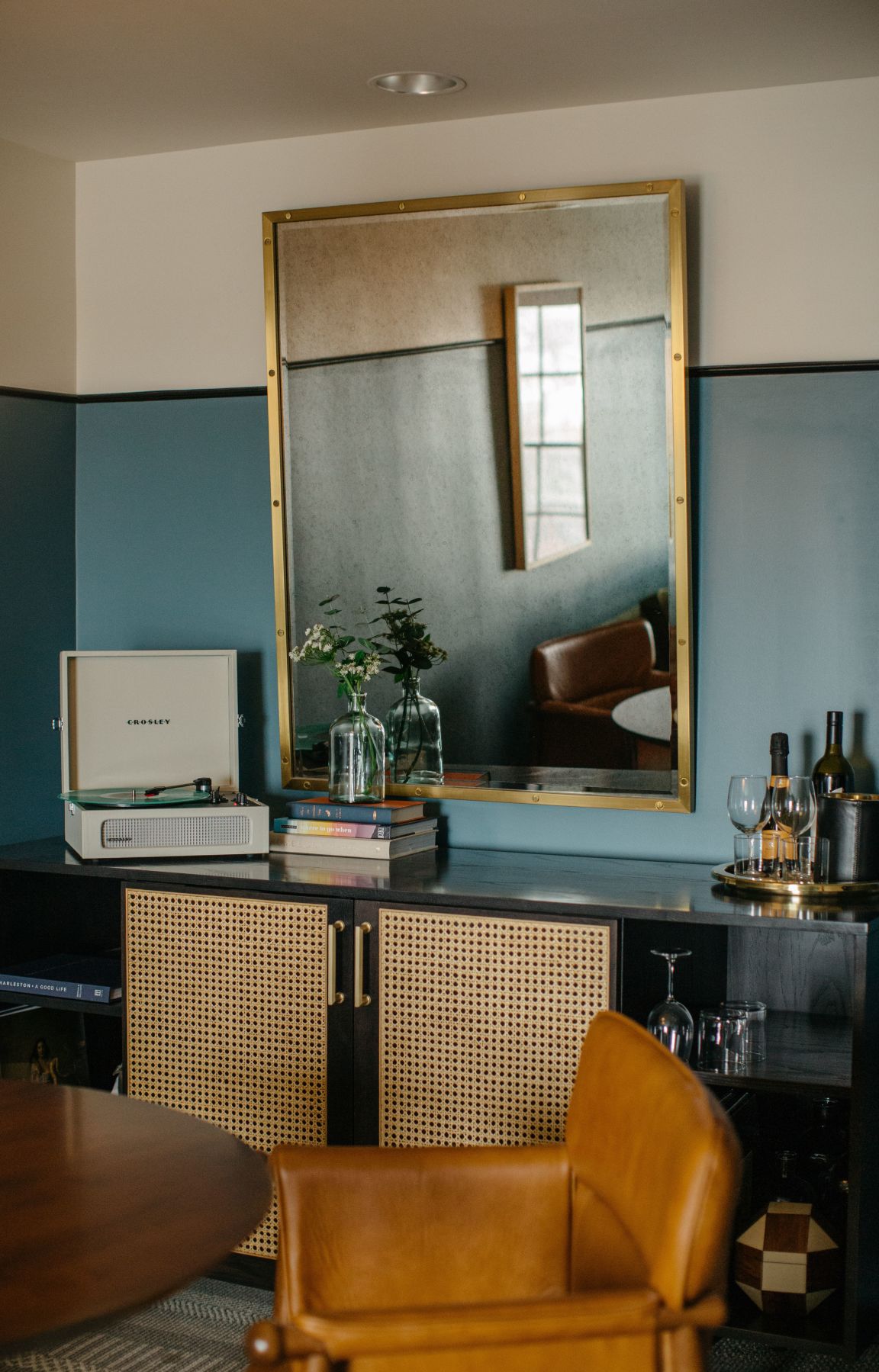 Every suite at Emeline has a Crosby turntable stocked with a record that was curated by Mike Gomez of the local music store Record Stop. Provided/Emeline 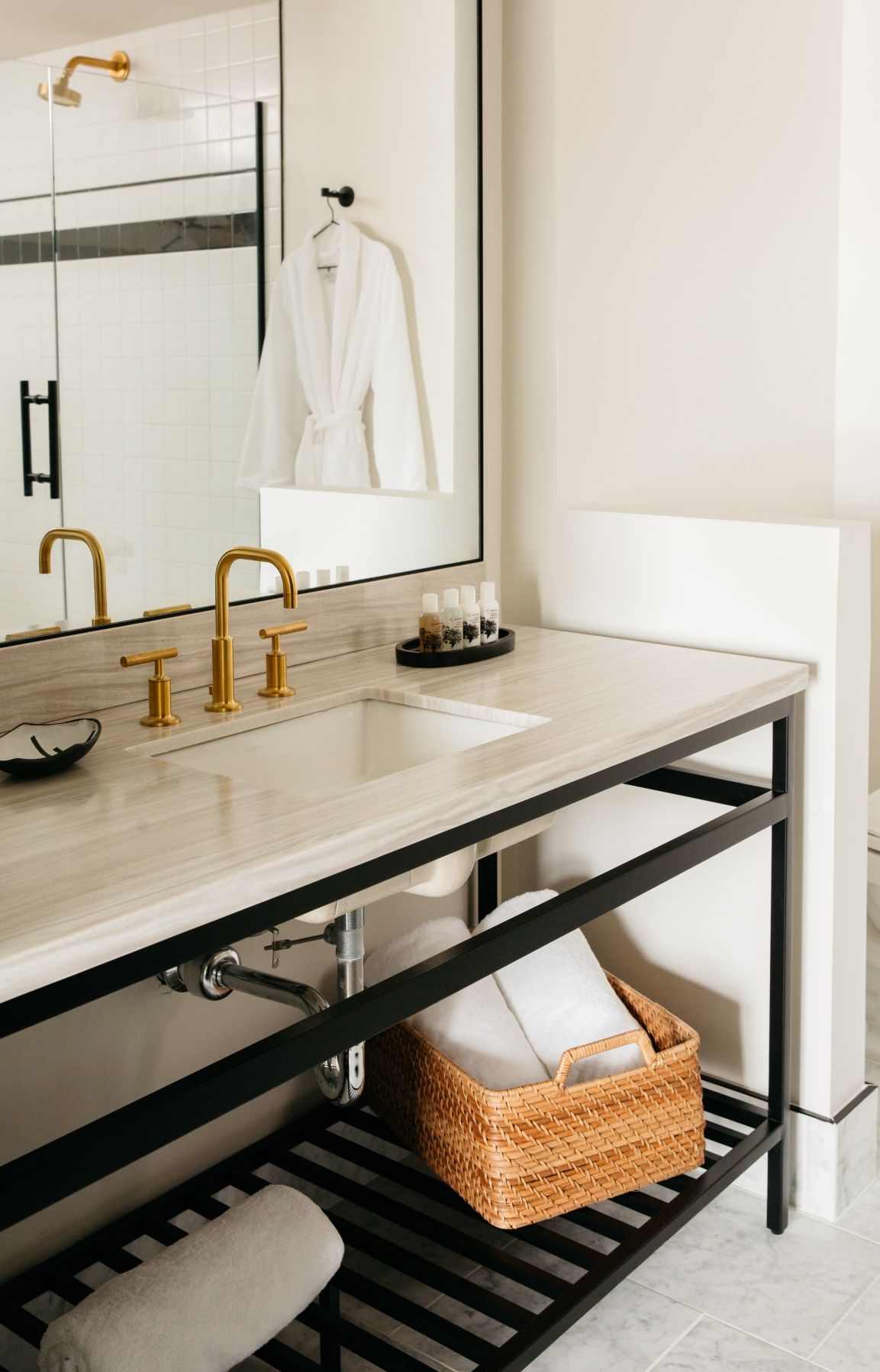 The soap dishes in the bathrooms at Emeline were made by local ceramic artist Susan Gregory. Provided/Emeline

For nearly 30 years, the Church Street building that houses the boutique lodging Emeline was a chain hotel.

First it was a Hawthorne Suites, then, most recently, a DoubleTree. Now, the markings of its past life are nowhere to be found in the downtown Charleston structure, which opens under a new independent flag Wednesday just steps away from the historic City Market.

For the past few years, Emeline's developers have painstakingly planned out every detail of the property, down to the soap dishes in the guest rooms — all custom-made by local ceramic artist Susan Gregory — to introduce Emeline into Charleston's increasingly competitive high-end hospitality market.

That's especially true where Emeline is located, near several of the city's highly-ranked lodgings and close to lots that have been approved for more hotel rooms.

The property's reinvention started about five years ago, when Rockbridge, a private investment firm headquartered in central Ohio, acquired the ground lease for undisclosed terms.

When the company realized the combination of the location, the strength of Charleston's hospitality offerings and the features of the building itself — the front doors, for example, have been in place since 1852 — they "really decided to make it a very special property," said Brad Harvey, Emeline's general manager, who previously managed the former DoubleTree.

"They did a lot more than they initially intended to make it something really compelling for travelers," Harvey said of Rockbridge's plans

Emeline isn't based on a real person. She's the imagined "muse" of the developer, said director of sales and marketing Shannon Hartman, who most recently held the same role at the Charleston Harbor Resort and Marina.

Envisioned as the "consummate Southern hostess," Emeline is supposed to be a well-traveled collector with a taste for things that are timeless.

Upon check-in, every guest will be handed a beverage, either a punch cocktail or a non-alcoholic offering such as iced tea or lemonade.

Another surprise complimentary beverage can be had in the evenings when all guests in the bar and lounge area of the hotel's restaurant, Frannie & the Fox, take part in a toast with a nip of house-made limoncello.

In addition to Frannie & The Fox, which will serve three meals a day with a menu centered around the kitchen's wood-fired oven, Emeline will also have a cafe, called Clerks, serving coffee, pastries and other items daily.

They're hoping to lure locals into both spots, Harvey said. Clerks will offer loyalty cards with perks for returning customers.

Dallas-based hotel operator Makeready is managing Emeline, and some features at the hotel are common across the company's portfolio, which also includes The Alida in Savannah and Noelle in Nashville.

The words "custom," "curated" and "local" come up frequently on a tour of the hotel, sometimes all three together.

Coffee in the hotel's cafe is from local roaster Second State. A spiral staircase that will lead up to "The Archives," an area that will feature a rotating display of art, was made by Smithey Ironware, best known for its locally made cast iron skillets.

Many of the light fixtures were made by Urban Electric, which produces handmade, one-of-a-kind fixtures at its North Charleston headquarters.

The new hotel has the same number of guest rooms that the DoubleTree had — 212 — with suites making up about 60 percent of the total.

Each suite has a Crosley turntable that comes stocked with a copy of a record compiled by Mike Gomez of the John Street music store Record Stop. One side, called "Friends of Old," features classic tunes like "Love and Happiness" by Al Green. The second side, "Friends of New," has tunes like "Sparrow" from the Charleston band Jump, Little Children.

The small frames hanging above the guest room beds have one of the few hundred vintage postcards they collected, most with nautical or beach themes.

Common areas all noticeably smell like the hotel's signature scent, which is described as having notes of "lush green botanics, salty ozone, exotic woods and spice."

On each floor, stations referred to as "The Nooks" have been installed where guests can fill up reusable bottles and glasses with sparkling or chilled water from a tap.

Hartman said they wanted to pack the new property with things that "surprise and delight."

A couple of those surprises come in the form of windows incorporated into the dining spots. Behind the counter at Clerks, there is a window that slides open onto Church Street, where people passing by can pick up a coffee or a treat from the street.

At Frannie & The Fox, a small hallway behind the bar has two compartments with buttons that activate a light on the other side. When the light comes on, a bartender will lift up the window, take the guest's order and pass a cocktail through the compartment.

Hotel design at Charleston gateway gets 'no' from board, harsh criticism from residents

Since the hotel is opening in the midst of the coronavirus pandemic, all employee training has included the same precautions many hotels and restaurants have been re-training their staffs to adopt, Hartman said.

"For us, these standards are going to be our baseline," Hartman said. "Plus, we're brand new, so guests have the comfort of knowing that."

On a recent walk-through of the property, all workers there for training and other preparation wore face masks, including in the kitchen.

Since many travelers are planning trips at the last minute during the pandemic, Emeline just recently started to see bookings come in, Harvey said. That makes it more difficult to gauge how the property will do this summer.

And even though some travel is returning, occupancy rates are still well below normal. South Carolina hotels were about 73 percent full in July 2019; the latest statewide figure is about 56 percent. Consequently, room rates are also down, falling by about $20 a night from a year ago to an average of $120 as of last week.

Emeline is also making its debut just days after some established high-end downtown lodgings reopened their doors for the first time since COVID-19 closures, also hoping to compete for the smaller pool of guests. The Dewberry and Belmond Charleston Place were up and running again last week.

But since the opening comes just before a holiday weekend, Hartman said, Emeline is hoping the Charleston market will see another bump in visitation, as it did over Memorial Day.

The hotel is accepting reservations and will welcome its first guests July 1, with a starting summer room rate of about $250 a night. Clerks and Frannie & The Fox will open the same day.