The former CEO of SCANA Corp. has agreed to plead guilty to federal fraud charges stemming from the Cayce-based power company's failed management of a $9 billion nuclear plant construction project.

Kevin Marsh, once one of South Carolina's most prominent businessmen, now faces up to 10 years in prison and fines of more than $5 million after admitting to defrauding more than 753,000 utility customers who have collectively paid billions of dollars for the now-abandoned expansion of the V.C. Summer Nuclear Station in Fairfield County. The debacle is widely considered the biggest business failure in state history.

The charges, filed Tuesday by the U.S. Attorney's Office for South Carolina, accuse Marsh of covering up serious flaws that doomed the project and lying to regulators, investors and the public as the utility raised its electric rates nine times to pay for the construction effort.

Marsh, who led SCANA and its electric subsidiary, South Carolina Electric and Gas from 2011 to 2017, becomes the second executive from the now-defunct utility to strike a plea deal with federal prosecutors who are leading an ongoing criminal investigation into the project.

Marsh's top deputy, former SCANA Chief Operating Officer Steve Byrne, agreed to plead guilty to similar fraud charges this summer. Prosecutors have made clear in court filings they plan to charge other managers of the project.

The plea agreements require both Marsh and Byrne to cooperate as witnesses in the ongoing probe by the FBI and the U.S. Department of Justice.

As part of Marsh's new deal, prosecutors agreed to recommend a prison sentence of between 18 months and three years as long as the former CEO cooperates with the federal criminal investigation. Those terms strongly suggest that Marsh will spend time behind bars, unless the judge decides otherwise.

“In these already challenging times, no one should be able to use a position of trust, power, and influence to take from the hardworking people of South Carolina,” U.S. Attorney Peter M. McCoy Jr. said in a written statement. “While the filed documents speak for themselves, this office will continue to work with our federal and state partners to stand firm against those who would seek to defraud South Carolina taxpayers.”

“It is important that that the people at the top be held accountable when they do not follow the law,” S.C. Attorney General Alan Wilson added. “The Attorney General’s Office is pleased to work with our federal and state prosecutorial and law enforcement partners to seek justice against those who defraud South Carolinians.”

The sudden abandonment of the V.C. Summer venture in July 2017 sent shockwaves through South Carolina's business, energy, legal and political worlds. The project had been touted for years by SCE&G and its minority partner, state-owned utility Santee Cooper, as a means of providing clean, reliable power to South Carolinians for decades to come.

But South Carolinians were never told the extent of the design, engineering, supply chain and construction productivity problems that plagued the V.C. Summer expansion almost from the start. Marsh and other executives publicly brushed aside early challenges that delayed the power plant's completion date, instead highlighting the improvements that were ostensibly going on at the construction site. 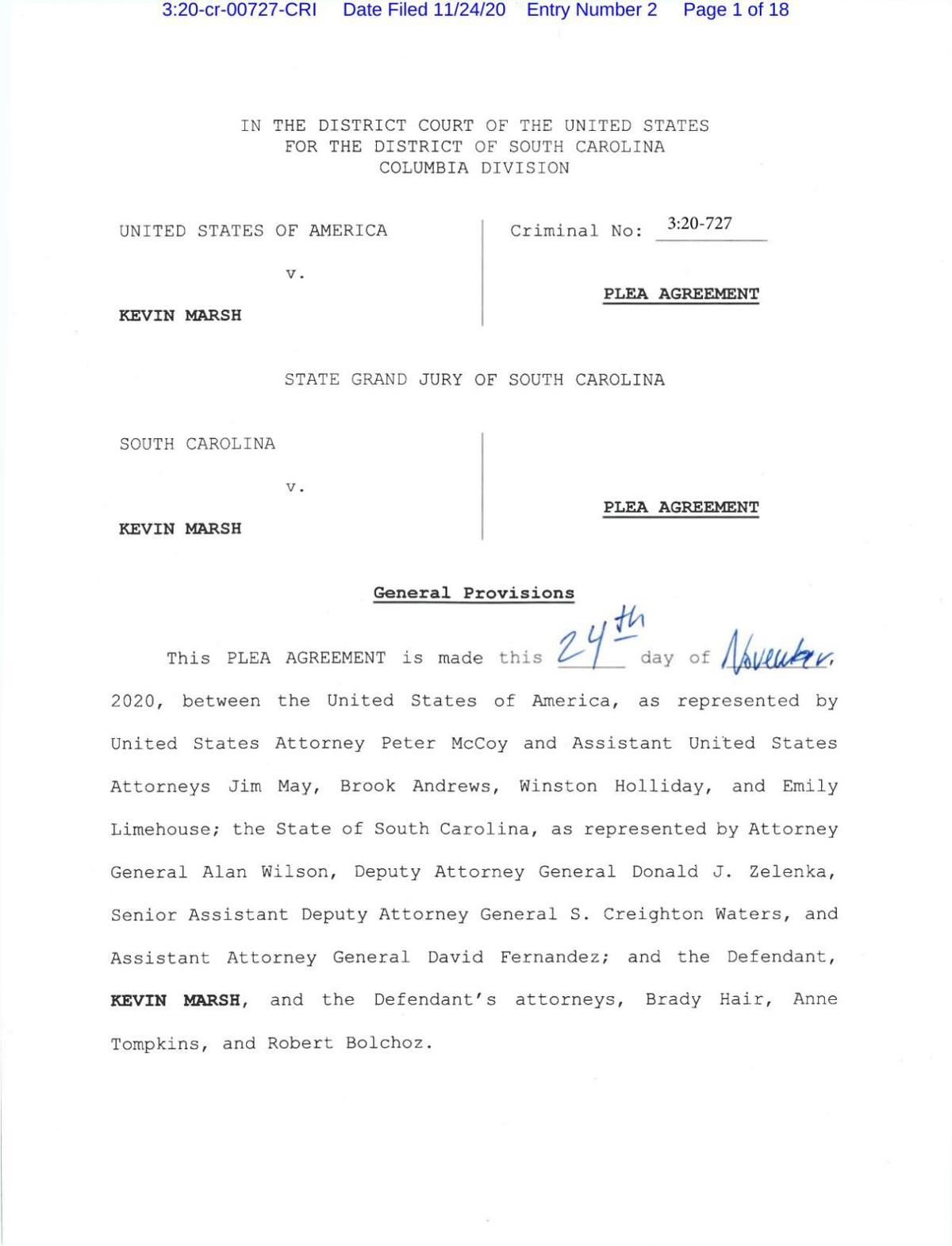 Details about the project's flaws — and SCANA's efforts to cover them up — have since surfaced in internal emails, construction reports, lawsuits, criminal charges and newspaper accounts.

That includes a 2015 assessment of the project by Bechtel Corp., a California-based civil engineering firm. Bechtel spent months at the V.C. Summer site and ultimately concluded the project was crippled by a series of flaws and would not be completed by a 2020 deadline to qualify for federal tax credits, which were necessary to pay for the expansion.

The charges filed Tuesday accuse Marsh and other co-conspirators of deleting damaging findings from that assessment and then burying the report entirely, withholding it from regulators and the public. The public didn't find out about the Bechtel report until September 2017, when Gov. Henry McMaster forced Santee Cooper to release it.

In a voicemail obtained by The Post and Courier after the project’s collapse, SCANA’s top accountant on the V.C. Summer project accused Marsh, Byrne and former SCANA Chief Financial Officer Jimmy Addison of propping up the project in order to cash in on their executive bonuses.

“They have broken every friggin’ law that you can break,” Carlette Walker said in a voice message to a Santee Cooper employee.

Marsh's attorneys did not immediately respond to a request for comment Tuesday afternoon.

The entire project was a gamble with ratepayers' cash, and South Carolinians were burned when the effort failed.

SCE&G customers who have already paid $2 billion in the form of higher power bills for the project will be charged another $2.3 billion for V.C. Summer over the next few decades.

The two million South Carolinians who rely on Santee Cooper's power also must pay off that utility's $4 billion in V.C. Summer debt. The debacle has led to a yearslong debate in the Legislature about whether to sell the state-owned power provider to offload that debt. McMaster has repeatedly called for the 86-year-old utility to be privatized.

More than 5,000 construction workers on the site were instantly fired when the project was abruptly cancelled. 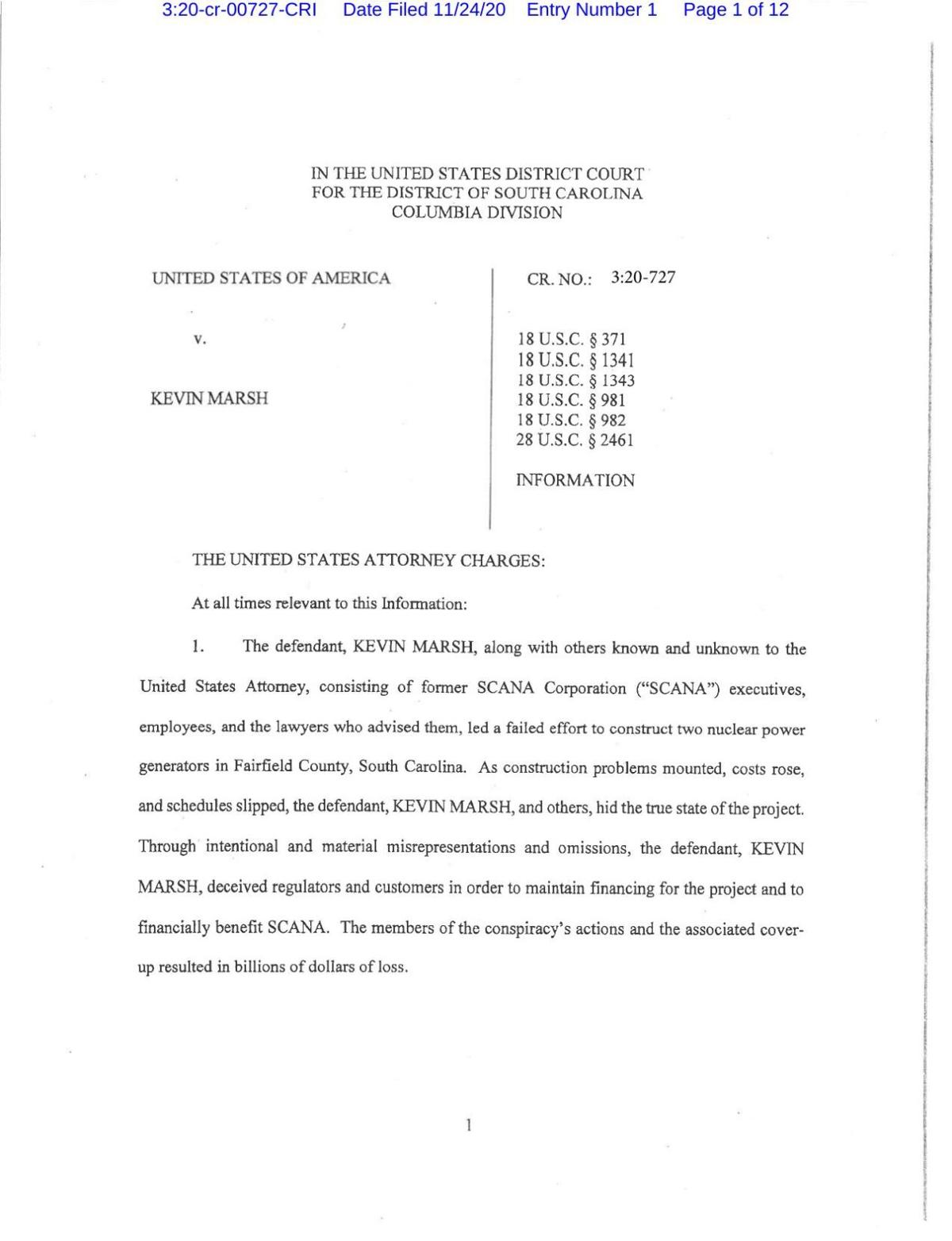 SCE&G's once-sterling reputation was dragged through the mud as SCANA's stock price plummeted. Formerly one of South Carolina's largest homegrown companies and a member of the Fortune 500, SCANA was taken over by Virginia-based Dominion Energy, and the electric utility that serves customers from Charleston to the state capital of Columbia was renamed Dominion Energy South Carolina.

Dominion has repeatedly said it is cooperating with the investigation.

Three months after the project's abandonment, Marsh and Byrne announced they were retiring from SCANA. Observers have long suspected they would become targets of the federal investigation into the project's failure.

In February, the two men were also accused of fraud in an 87-page civil lawsuit filed by the U.S. Securities and Exchange Commission, which opened up a parallel investigation into the two unfinished nuclear reactors and the representations that SCANA made to the company's investors on Wall Street. Prosecutors have asked a judge to halt that lawsuit until the criminal investigation is over.

Both Marsh and Byrne face prison time and criminal fines worth up to $250,000. But Marsh could also have to pay some $5 million in restitution — far more than the $1 million Byrne agreed to pay.

Both men earned millions of dollars in bonuses from SCANA for their work on the project.

Federal prosecutors have asked a judge to delay Byrne's sentencing until the conclusion of the investigation. They will do the same for Marsh. Delaying their sentencing ensures the cooperation of Marsh and Byrne as star witnesses in possible trials against other executives who led the V.C. Summer project. If Marsh or Byrne are unhelpful to prosecutors, they could be slapped with more severe penalties.

Both men should have plenty to say to investigators. They were at the center of key decisions regarding the project, such as how to portray the project publicly, how to handle disputes with lead contractor Westinghouse and whether to continue the construction effort at all.