When Dominion Energy purchased S.C. Electric & Gas earlier this year, it agreed to take on a sprawling web of lawsuits the South Carolina utility faced as a result of the failed V.C. Summer nuclear project.

The list of legal and tax liabilities Dominion voluntarily inherited is long.

It includes disputes with former contractors. There's also a legal fight with the nuclear construction workers who were abruptly laid off in July 2017. A federal lawsuit accuses SCE&G of racketeering. There's a fight with Fairfield County over a property tax deal that SCE&G entered into for the two reactors that were never completed.

And there's an ongoing probe by the state Department of Revenue to determine if the utility owes taxes on billions of dollars in parts and materials it purchased for the abandoned nuclear power plants.

But 10 months after Dominion cemented its takeover, the Virginia-based energy giant is arguing it shouldn't have to cover all of those legal bills on its own. 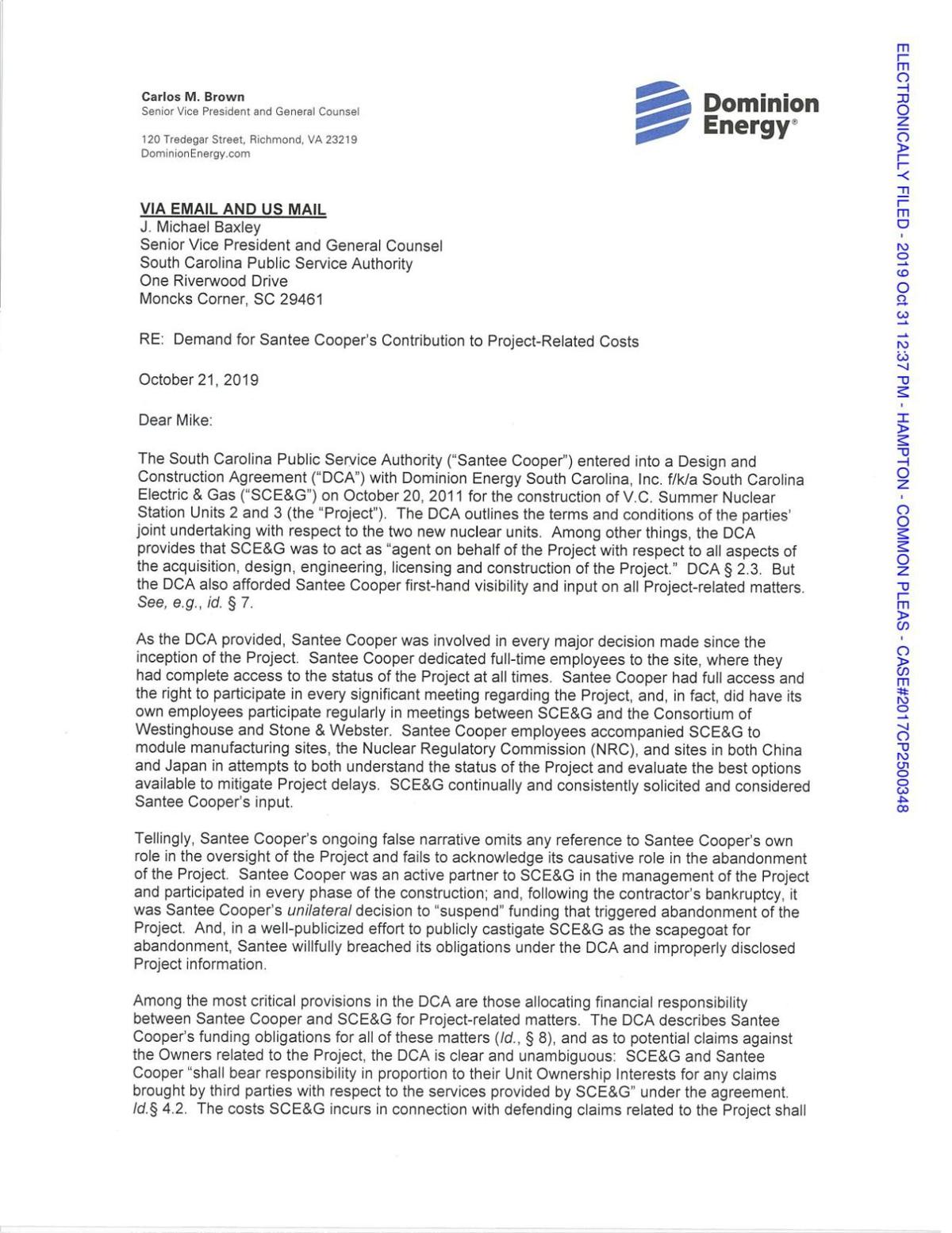 Dominion's attorneys sent a letter to Santee Cooper, the minority owner of the failed nuclear project, on Oct. 21. It demanded the state-run utility cover 45 percent of Dominion's costs for nine separate legal disputes.

"To date, Santee Cooper has failed to honor its contractual obligations," Carlos Brown, Dominion's attorney wrote in his letter.

Santee Cooper helped pay bonuses for SCANA's executives, even as they complained about nuclear project

Dominion declined to tell The Post and Courier how much it has spent on all of those legal disputes so far.

Part of Dominion's demands to Santee Cooper, however, include a roughly $200 million settlement it entered into with current and former SCE&G customers earlier this year. Ratepayers recovered the mostly small-dollar checks as part of that settlement in August.

Dominion's argument didn't sit well with Santee Cooper, which believes it doesn't owe Dominion anything. As a result, the Moncks Corner utility asked a judge Thursday to block Dominion from trying to extract millions of dollars from Santee Cooper and its ratepayers.

The fight over the legal costs is a sign of how hostile the relationship between the two utilities has become. It's far different from the united front the companies tried to display shortly after they abandoned the $9 billion reactors.

It's not the first time the former business partners have confronted each other in court.

Santee Cooper is still arguing that Dominion, as SCE&G's new owner, should be responsible for any claims filed against the state-run utility. Santee Cooper wants to be held harmless in several other pending lawsuits, including complaints filed by South Carolina's 20 electric cooperatives.

In its letter last month, Dominion pushed back against those claims.

It's now up to Jean Toal, a former chief justice of the S.C. Supreme Court, to settle the bitter legal disputes between the two utilities.

It’s outrageous to think that Santee Cooper should be responsible for helping defend SCANA successor Dominion Energy in lawsuits that allege, among other things, that SCANA executives engaged in racketeering by fraudulently inflating power bills to generate unlawful proceeds. Of course, it was outrageous that Santee Cooper paid millions of dollars in bonuses to SCANA executives for the great work they were doing as the nuclear construction project was collapsing.

The education reform legislation to be considered by the General Assembly is disappointing.

Many of the cities, counties and public entities that Santee Cooper supplies with water recently voted on resolutions that will enable them to take over a pair of treatment plants and miles of pipelines should the utility be sold.