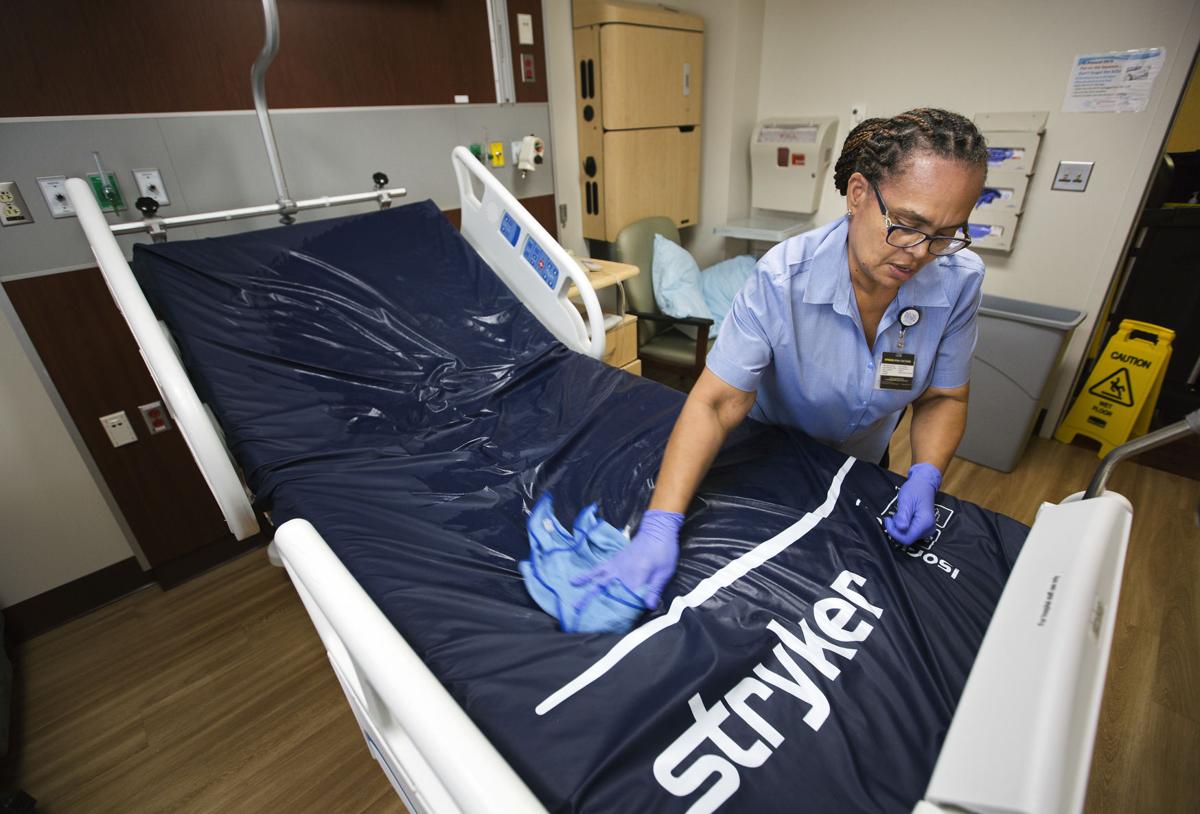 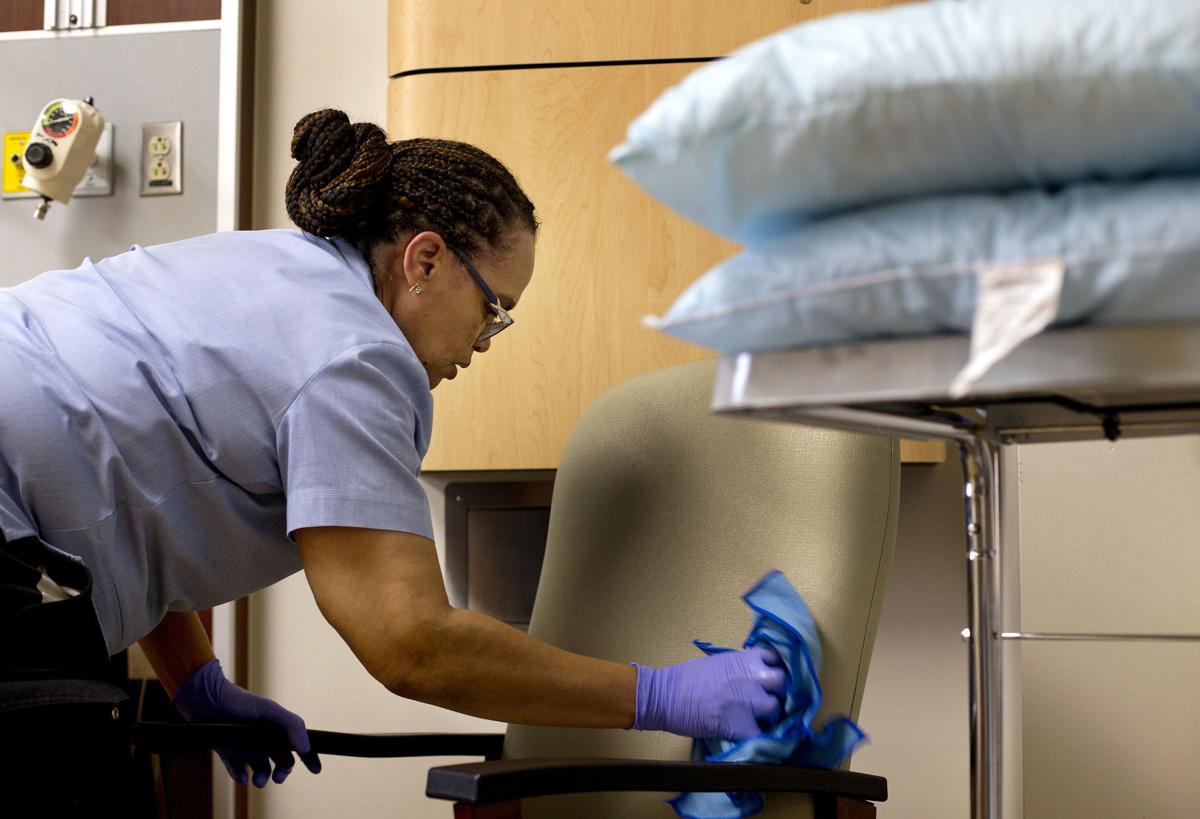 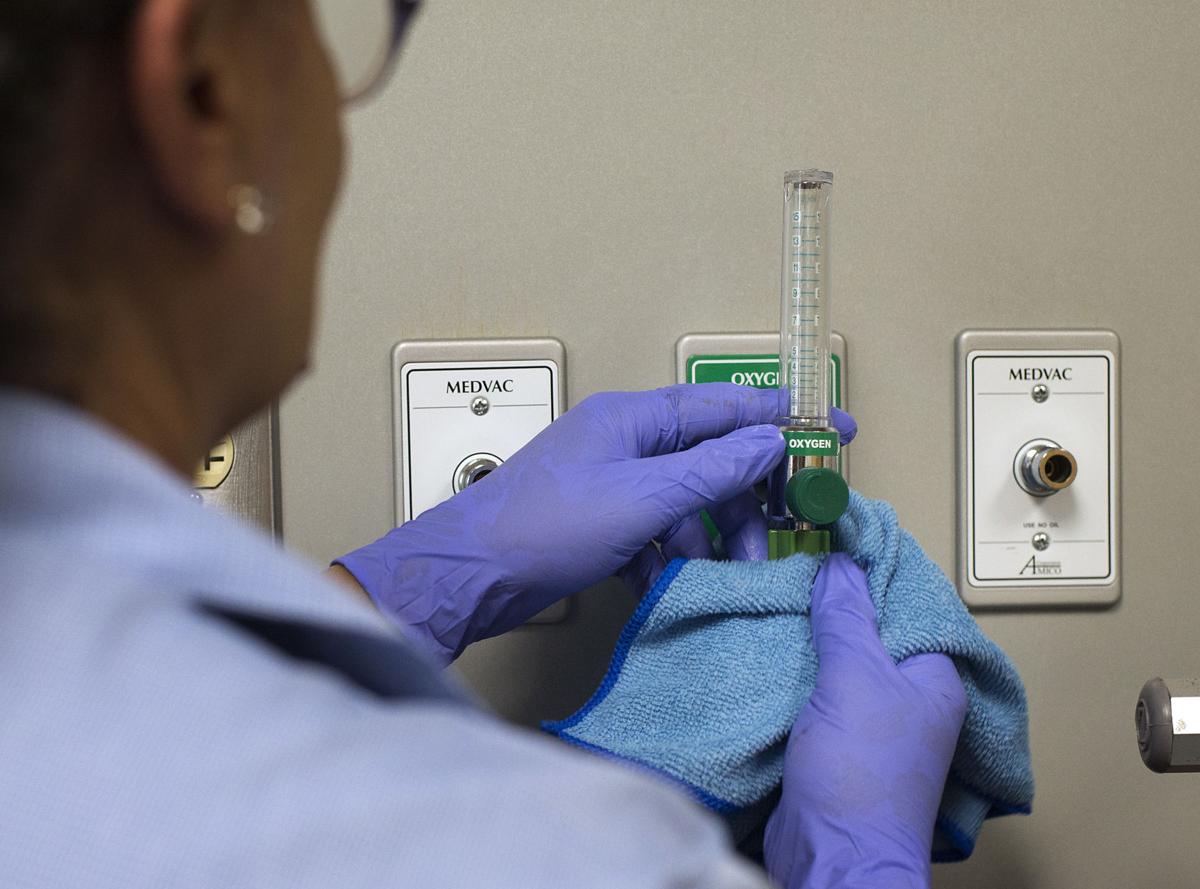 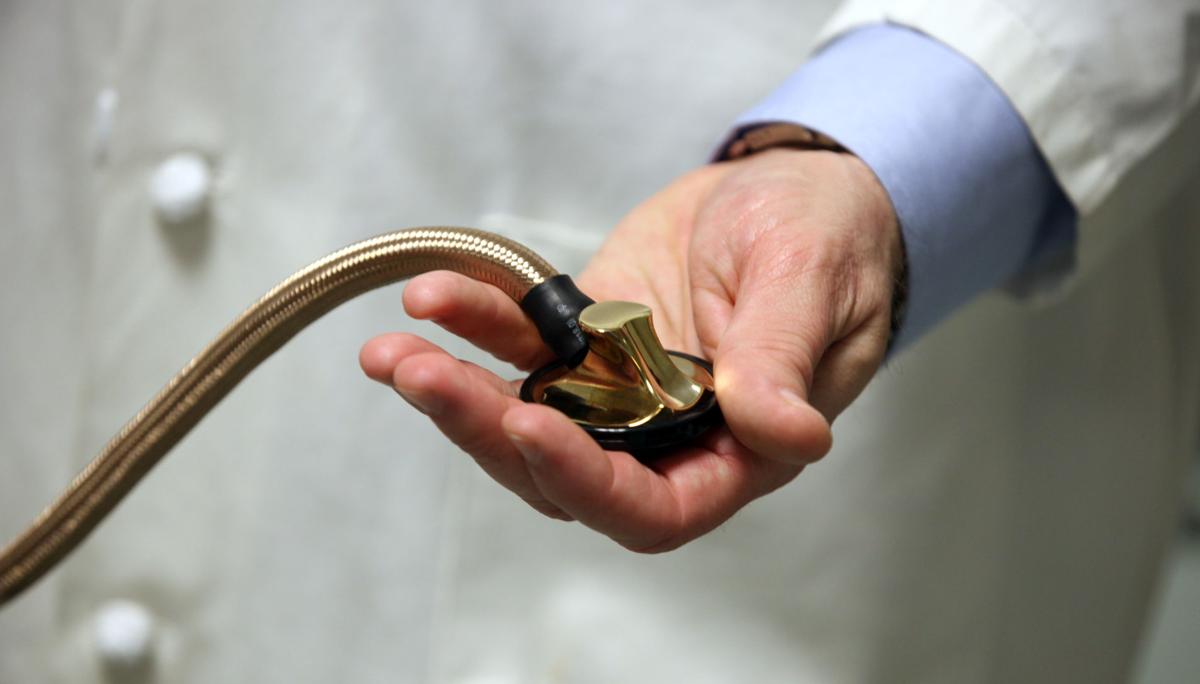 Copper stethoscopes are one example of items already on the market that seek to take advantage of the metal's natural germ-fighting abilities. Sarah Pack/MUSC/Provided 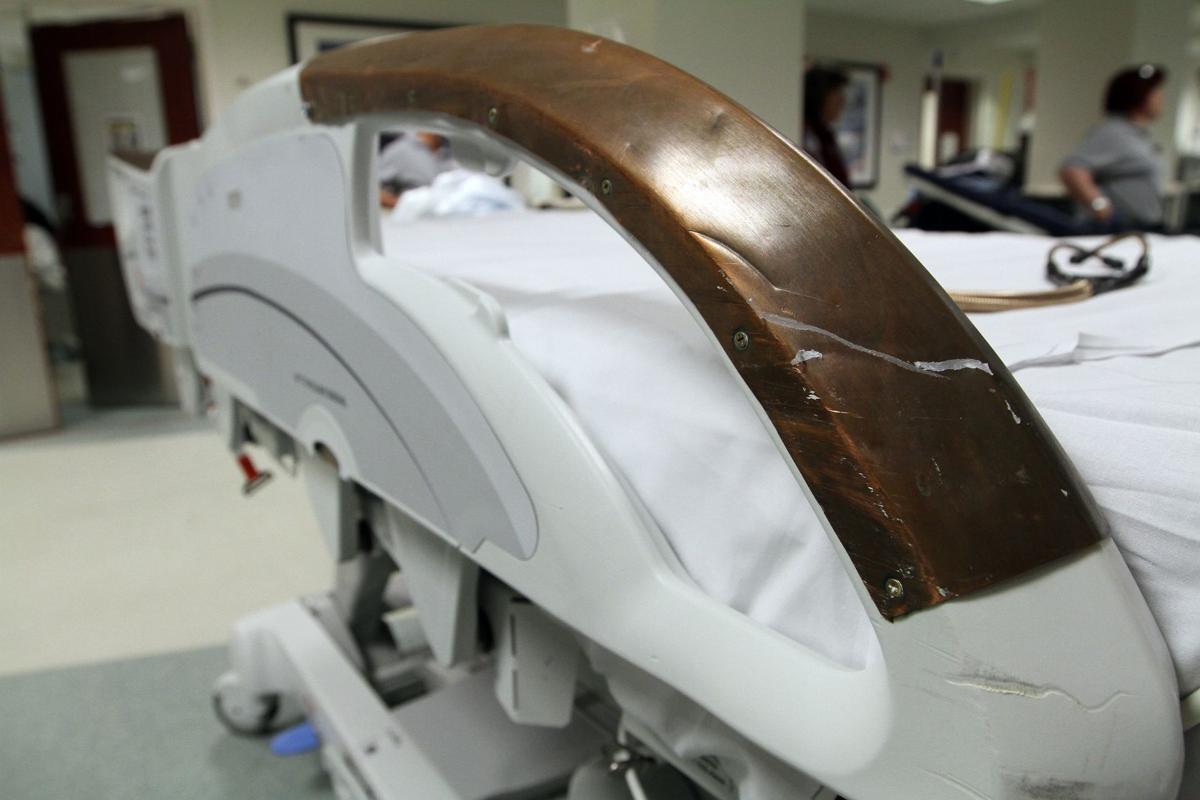 At first, researchers used form-fit copper covers attached to hospital beds to test how effective the tool was in killing bacteria. This photo was taken at the Medical University of South Carolina in 2013. Today, an Indiana company is able to coat entire hospital beds in a copper solution. Sarah Pack/MUSC/Provided 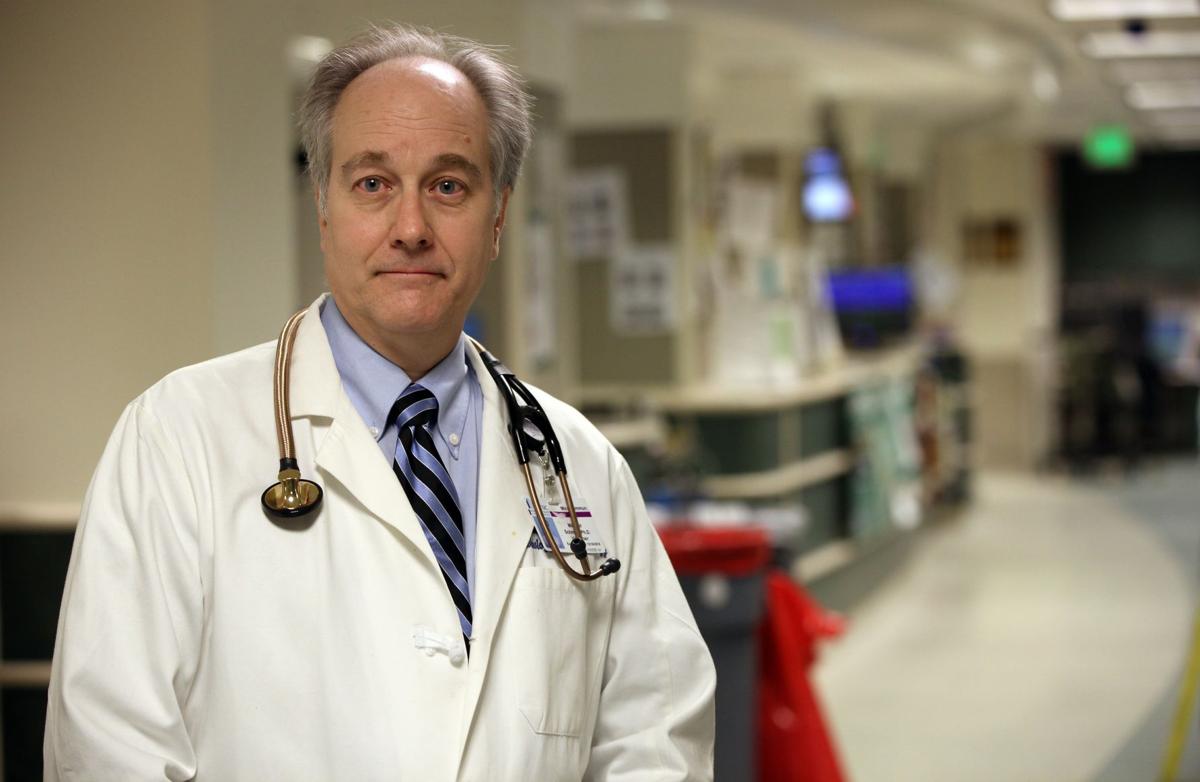 Michael Schmidt, a professor in the Medical University of South Carolina's Department of Microbiology & Immunology, has been studying the antimicrobial benefits of copper for more than a decade. Sarah Pack/MUSC/Provided 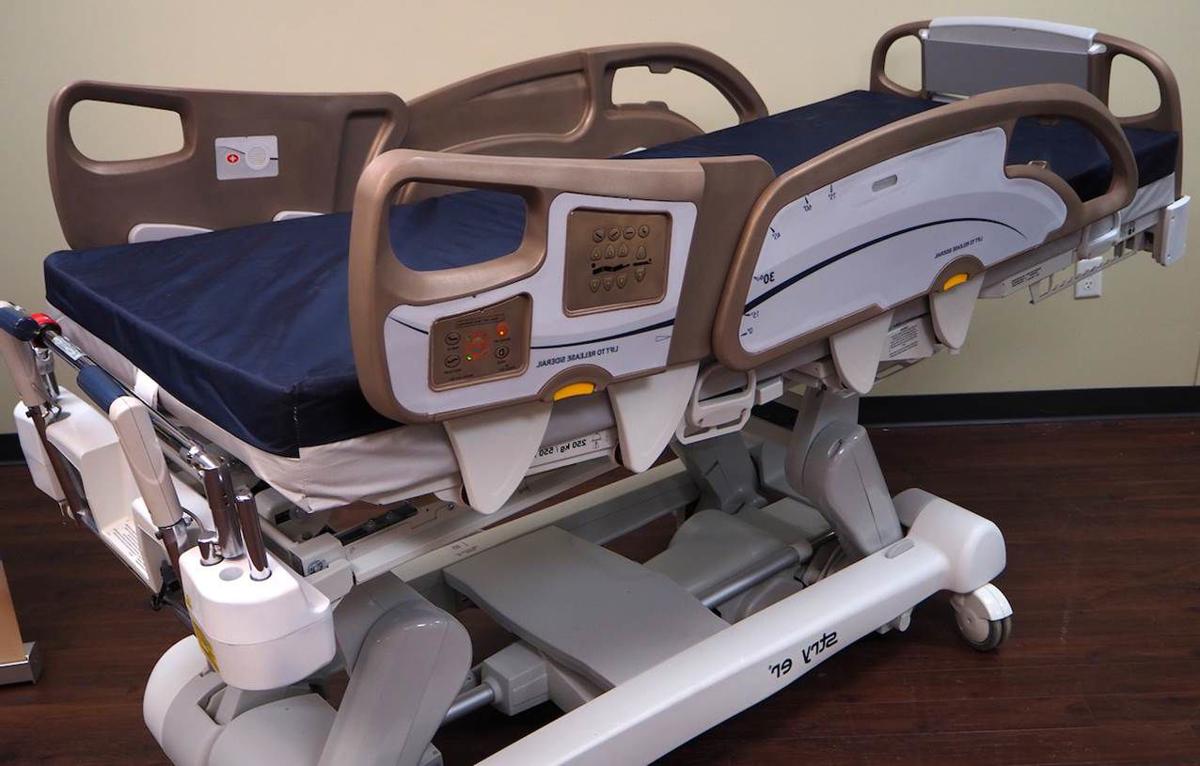 BedTechs, an Indiana-based company, can now outfit beds with a copper-nickel coating using a cold spray. The copper is effective in killing bacteria. BedTechs/Provided

Michael Schmidt thinks he's had a solution to one of health care's toughest problems for about a decade.

The problem is the infections patients pick up in hospitals, an issue that kills thousands every year and costs billions.

Schmidt, a professor at the Medical University of South Carolina, believes copper could be a big part of the answer. The metal has a natural bacteria-killing superpower humans have known about for thousands of years.

A clinical trial showed copper in hospital rooms could reduce infections by 58 percent. The innovation is all the more important as infections continue to kill patients, and health care grapples with the threat of antibiotic-resistant bugs.

So why aren’t the nation’s hospital rooms shining bronze?

Regulations, money and the need to build an iron-clad argument have slowed Schmidt's idea from taking hold. Manufacturers will only innovate if the change adds value. Overhauling anything in the health care business requires money, time and plenty of empirical evidence.

Meanwhile, Schmidt has clung on to his hope of reinventing hospital rooms.

Copper has been used for 4,000 years to purify water and treat wounds.

Farmers have been using copper since the 1700s as a fungicide.

Those people could probably never have imagined the science behind why this happens.

That might be because it’s complicated. In short, copper ions cause bacteria cells’ membrane to rupture. Copper launches an onslaught on the cell at multiple angles, all at once. Its DNA unravels.

The result, Schmidt said, is the bacteria is forced to “commit suicide.”

Copper isn’t the only metal with this special attribute. Silver has it, too. Metals have always been useful to killing bacteria. Zinc tablets were discovered in a medicine bottle on a Roman shipwreck dating back to 140 B.C., for instance.

The plastics in hospital rooms, however, host a flora of bacteria.

Health systems across the nation have committed to fighting infections through better practices. They can clean more and buy better products.

Bacteria will always come back. One in 25 patients who stay in a U.S. hospital will contract an infection.

Pneumonia is the most common culprit, according to a team of investigators who published a report in the New England Journal of Medicine. Infections in the gut are almost as likely, most often a result of the bacterium "C. difficile," which causes diarrhea-inducing colitis and can be life-threatening. Infections after surgeries are also common.

For accountability, Scheurer said a smudge might be added somewhere secret before the clean. A check afterward shows whether the smudge is gone.

Once a patient is moved from the room, a “terminal clean” is done. Every surface, from the folds in the mattress to the baseboards, are wiped down. MUSC recently switched to a new cleaning agent called Pericept that smells like vinegar.

“We are always chasing cleanliness. Most of what we’re trying to combat you can’t see with the human eye,” Scheurer said. “It’s a constant war.”

South Carolina hospitals fare close to average on federal infection-prevention scores. They performed better than the U.S. average only in urinary tract infections and infections following surgeries. They do worse with infections that happen when patients are put on a ventilator.

The ratings can affect how much hospitals are paid. The federal government put a “reduction program” in place as part of the Affordable Care Act. Hospitals that score in the bottom quarter lose 1 percent of their Medicare reimbursements.

So conversations about infections became part of how hospitals looked at their finances.

Sylvia Garcia-Houchins, director of infection prevention and control for The Joint Commission, said much progress has been made since she began her career in prevention in the late 1980s, not long after the AIDS epidemic began. Back then, her colleagues would drink coffee at their bench and smoke in the lab.

In recent years, better data, new technologies and better accountability have improved the situation. The Joint Commission’s patient safety goals have made a difference, too, Garcia-Houchins said. Hospitals today know someone is looking over their shoulder.

Guidelines alone are not enough, she said. Money has to be on the line for some hospitals to change their behavior.

The work has produced results. Infections from surgeries and catheters are down. Still, hospitals across the country have not made progress on pneumonia, or C. difficile, researchers wrote in the New England Journal of Medicine. And the same percent of patients are dying from infections caught in the hospital as before.

“It’s truly scary. There’s no fun run, there’s no telethon,” Schmidt said. “It’s because the patients die one at a time with their family around their bed all asking the health care team one question: ‘Why?’ ”

A group of nurses in the mid-1980s laid the groundwork for Schmidt’s research, finding copper doorknobs were cleaner than stainless steel.

A copper industry trade group took interest in the possible new market for the metal, which is how MUSC became involved in 2005. It took another couple of years, but funding through the Department of Defense for a major clinical trial came through.

It was that study, conducted in 2008, that proved copper in hospital rooms could cut infections by more than half.

Later, Schmidt won funding from the Chilean government for a similar analysis in the South American country. In 2016, he finished a study at an Iowa hospital.

Over the years, Schmidt has had to wear different hats: researcher, politician, businessman, negotiator.

Sen. Dick Durbin of Illinois cold-called him once to request Schmidt’s data. He received a summons from England’s National Health Service to consult with its ministers. Once, he was subpoenaed by the U.S. Senate.

He has begged major bed manufacturers, including Stryker, a publicly traded medical technology company with a $78 billion stock market value, to use copper. It declined, he said.

Schmidt found an unlikely partner in BedTechs, a company based in Indiana that sells refurbished hospital beds.

Michael Wilson, BedTechs’ president, said hospital beds bought new cost anywhere from $5,000 to $40,000, or about the price of a low-end BMW. Hospitals need dozens of them.

Beds also harbor much of the bacteria in a hospital room.

Putting a copper-clad bed on the market is the culmination of about eight years of work. A study showing its efficacy is expected to publish soon. Wilson said he didn’t foresee it taking so long.

One problem they confronted was the variety of beds on the market. The team knew they wouldn’t be able to stamp copper molds for every type.

Wilson said they settled on a liquid copper-nickel mixture. The bed’s plastic frame can be coated in the solution, which then solidifies. The result is a recycled bed with every inch of plastic covered in copper, still priced below what it would cost to buy one new.

The Environmental Protection Agency acknowledged copper's benefits in 2008, allowing new products to register with the EPA and claim public health benefits. Copper is the first solid surface material to earn that kind of EPA acknowledgement. The move opened the door for invention.

The glassmaker Corning Inc. recently developed a glass ceramic with copper in it. Joydeep Lahiri, a division vice president at the company, said the invention is nearly ready for the market. Corning tested how the ceramic worked when added to paint, and found it reduced bacterial colony counts by 99.9 percent. It performed the tests in conditions recommended by the EPA.

Hospitals are among the kinds of businesses the company may target.

As a public health threat from superbugs mounts, Lahiri said, there is a critical need for antimicrobials. Copper is a powerful antimicrobial, he added, and is much safer than most existing options. Schmidt was among the scientists who championed an effort to push the EPA to register copper’s germ-fighting prowess.

“He’s taken this age-old microbial and has been able to translate that into something that’s relevant today,” Lahiri said.

One of copper’s limits, most would agree, is its price.

Lahiri wouldn’t elaborate on the costs of producing Corning’s ceramic, but he said the company found copper to be cost-effective enough to scale up production.

BedTechs said the cost of covering a bed with the thin layer of metal runs about $2,000. BedTechs also will be selling copper-coated rails to give hospitals the option of outfitting their existing beds.

Peter Sharpe, a consultant working with the company, said a conventional, run-of-the-mill hospital bed will cause about two infections every year. Each episode will cost the hospital somewhere between $8,000 and $40,000.

The argument has to be that hospitals will save money by stopping infections, Sharpe said. Part of copper’s magic is that it is always working. It is about a sixth the price of silver, and is highly recyclable.

Research endorsed by NASA could put copper medical devices in space before they’re in a typical American hospital. Jorge Zuniga, an infectious disease specialist at the University of Nebraska, is working with a Chilean company to create 3D-printed prosthetics and other medical devices made mostly of copper.

NASA is interested because astronauts are susceptible to infection, and long-distance space travel, especially to Mars, may be on the horizon. Crews could take a 3D printer to space and create whatever they need out of anti-microbial copper.

The challenge will be making it durable, Zuniga said. But he expects to see antimicrobial materials become the new standard.

“Innovation comes, but it comes in time,” she said. “The technology needs to become less expensive, and someone needs to advocate for it.”

New hospital projects have to be planned years in advance, she said. And as planners buy everything they need, items have to be scratched from the wish list.

Schmidt, the MUSC researcher who describes himself as an "evangelist" of copper's benefits and the dangers of hospital-acquired infections, wants to put copper products at the top of hospitals' wish lists. He couldn't have predicted the years of effort he would invest into the idea.

Everyone wants to see more data. The studies needed cost millions. Other researchers, he admits, would have given up by now. People think Schmidt works for the copper industry.