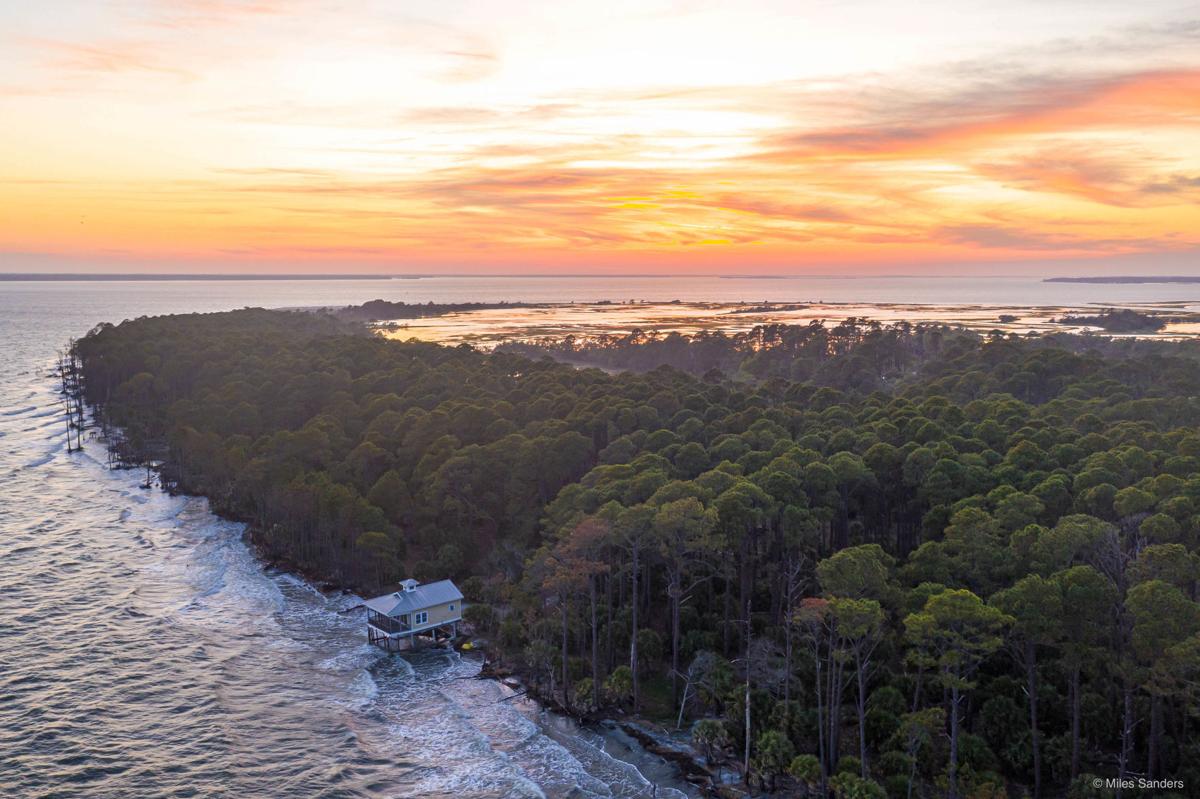 Bay Point Island in Beaufort County on May 5, 2020. Next Thursday, the Beaufort County Zoning Board of Appeals will review the plans to determine whether an ecotourism project will receive its special-use permit — a key decision in determining if the development will become a reality. Miles Sanders/Provided 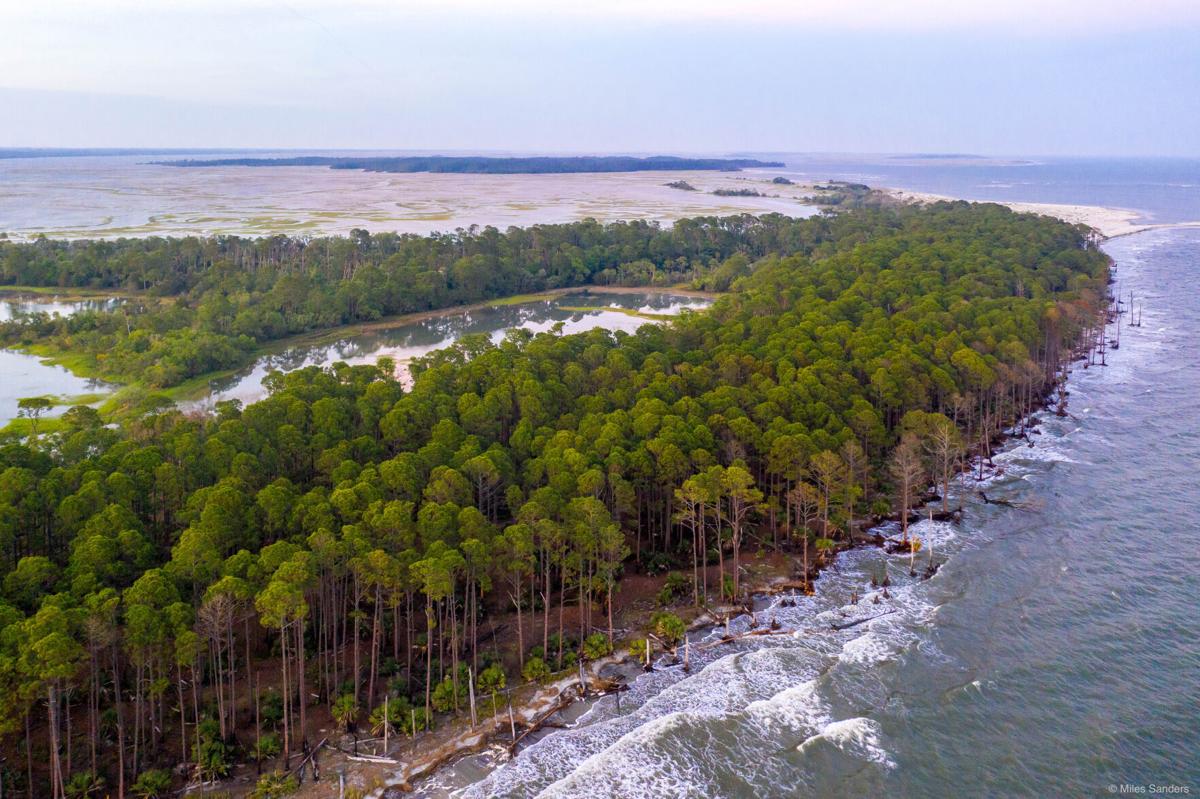 Plans to build a luxury "eco-resort" on a South Carolina barrier island have attracted attention — and opposition — from thousands online since developers first started seeking approvals for the $100 million project.

The resort is slated for Bay Point Island, just northeast of Hilton Head. Bay Point is uninhabited and only accessible by boat or aircraft.

In early November, an online petition calling on the development to be stopped had about 2,600 signatures. The post, which was created by the Gullah/Geechee Sea Island Coalition, continued to gain traction, and, on Monday, online signers had surpassed 21,500.

Some left comments with their names.

"I’m Gullah, and I’m a Sea Island native! This has to stop! We must save our land and preserve our culture!" one person wrote.

"Development on shifting sands is irresponsible and leads to costly damages that are often placed on taxpayers," another said.

The debate, which runs the gamut of Lowcountry issues from shifting sands and fragile habitats to the preservation of Gullah-Geechee spaces and ways of life, has only become more intense as the project advances.

The Beaufort County Zoning Board of Appeals will soon review the plans to determine whether the project will receive its special-use permit for ecotourism — a key decision in determining if the development will become a reality.

Board members were originally scheduled to hear the request on Thursday, but the full agenda was pushed forward to the next meeting in August. The meeting was going to be held at Beaufort High School, but the district's school buildings are currently closed to the public.

Since Bay Point is zoned as a natural preserve, county law only allows for accommodations to be built there if they qualify as "ecotourism."

According to Beaufort County staff, the resort plans can qualify, but late last year, they didn't pass muster. Beaufort County community development director Eric Greenway wrote in a December letter that "after careful review," he concluded the resort wasn't ecotourism.

But when the plans were resubmitted this spring with help from Jon Bruno, the executive director of The International Ecotourism Society, or TIES — the same group that wrote the definition of ecotourism used in the county's code — that decision was reversed, allowing plans to advance to the zoning appeals board.

The development plans include 50 villas, wellness centers, restaurants, and an "earth lab" and cooking school.

Structures will be built off-site "to minimize site impacts," according to the plans. No paved roads are included, and only bikes and small electric vehicles will be allowed. A helipad would be installed for emergencies.

A resort has been proposed for Bay Point before. Its principal owner, European investor Philippe Cahen, proposed a plan several years ago.

This time around, he intends for Six Senses, a Thailand-based luxury resort company, to run it. Most existing Six Senses resorts are in Asia or on islands in the Pacific, with some locations in Europe, Africa and the Middle East. Bay Point would be Six Senses' first U.S. property.

It's not uncommon for a one-night stay at a Six Senses resort to cost upward of $1,000.

For many who oppose the development, the issue is rooted in its proposed location rather than backers' plans to reduce waste and educate guests about ecology. Bay Point is a barrier island, constantly experiencing shifting sands and vulnerable to hurricanes.

Waters around the island are used by the Gullah-Geechee community as a fishing ground and have been for generations. The community says putting a resort there would threaten that livelihood.

Bay Point is also an important habitat for shorebirds and sea turtles.

Species conservation plans submitted to the county lay out general plans for how the development would handle vulnerable wildlife, but, according to Justin Stokes, the executive director of Audubon South Carolina, the organization is "unconvinced that the proposal is compatible with protecting the bird species that rely on the island."

Some of those species include those that are federally listed as threatened or endangered, like the piping plover and red knot, and other state-listed species such as the least tern and American oystercatcher.

At the county's request, Audubon S.C. met with the developers and "raised several questions and concerns related to birds and important bird habitat" on Bay Point.

"Since then, we have not received any commitments, revisions or responses that would address our concerns, which was also communicated to the county," Stokes said.

Early last month, a Facebook page titled "Saving Bay Point Island SC" appeared, touting the purported benefits of the proposed eco-resort and the results of the "stewardship" by owners of the island. The page includes links to a website for a newly formed "Beaufort County Ecotourism Association."

An email circulated to potential members said that the Beaufort County Ecotourism Association is not associated with the Bay Point project.

But an information sheet about the association says it would be "allied closely" with TIES, the group that was brought on to consult Bay Point owners before resort development plans were resubmitted to the county.

One of the five members listed online is landscape architecture firm J.K. Tiller & Associates. Company president Josh K. Tiller is, according to a post on the "Saving Bay Point Island SC" page, a "strong believer that the current proposal is the most sustainable choice for the island." He is also an official applicant listed on resort development plans submitted to Beaufort County.

Seth Pritchard, the chair of the College of Charleston's Biology Department, said the narrative of sustainability being presented by Bay Point is one that looks like "greenwashing," sharing misleading information that makes a project appear sound when it has real environmental consequences.

The Bay Point Island group had approached the college's career services office about working together, and that office passed along the materials to biology faculty members, Pritchard said.

"Barrier islands are so ephemeral. It just makes no sense," he said of the resort plans.

One of the things that stuck out, Pritchard said, was the emphasis TIES director Bruno put on the benefits the resort would bring to the local community. But, based on the widely-circulated petition and multiple opposition statements from local groups, it appeared the community "didn't really support the project at all."

Commentary: Bay Point Island is no place to put a resort

Another ecotourism group, the Global Ecotourism Network, has put substantial effort into warning others about working with TIES.

In February 2015, TIES's advisory board resigned en masse. One of those board members, Glenn Jampol, who now chairs the Global Ecotourism Network (GEN), a group formed with other ex-TIES board members, said their resignation was due to "grave ethical concerns."

Jampol specifically cited a lack of financial transparency as a reason for the schism.

TIES had its tax-exempt status revoked in May 2015, according to the Internal Revenue Services's auto-revocation list. No reinstatement date has been listed.

Bruno denies GEN's claims and says the board did not resign but rather was fired. Bruno did, however, confirm that TIES is not a 501(c)3 nonprofit.

Going forward, Bruno said there is no formal relationship in place between TIES and the proposed Bay Point resort. He described the work he did for the developers as a temporary gig. A co-owner of Bay Point contacted Bruno earlier this year for assistance on resubmitting the project plans that were turned down by county staff in December. 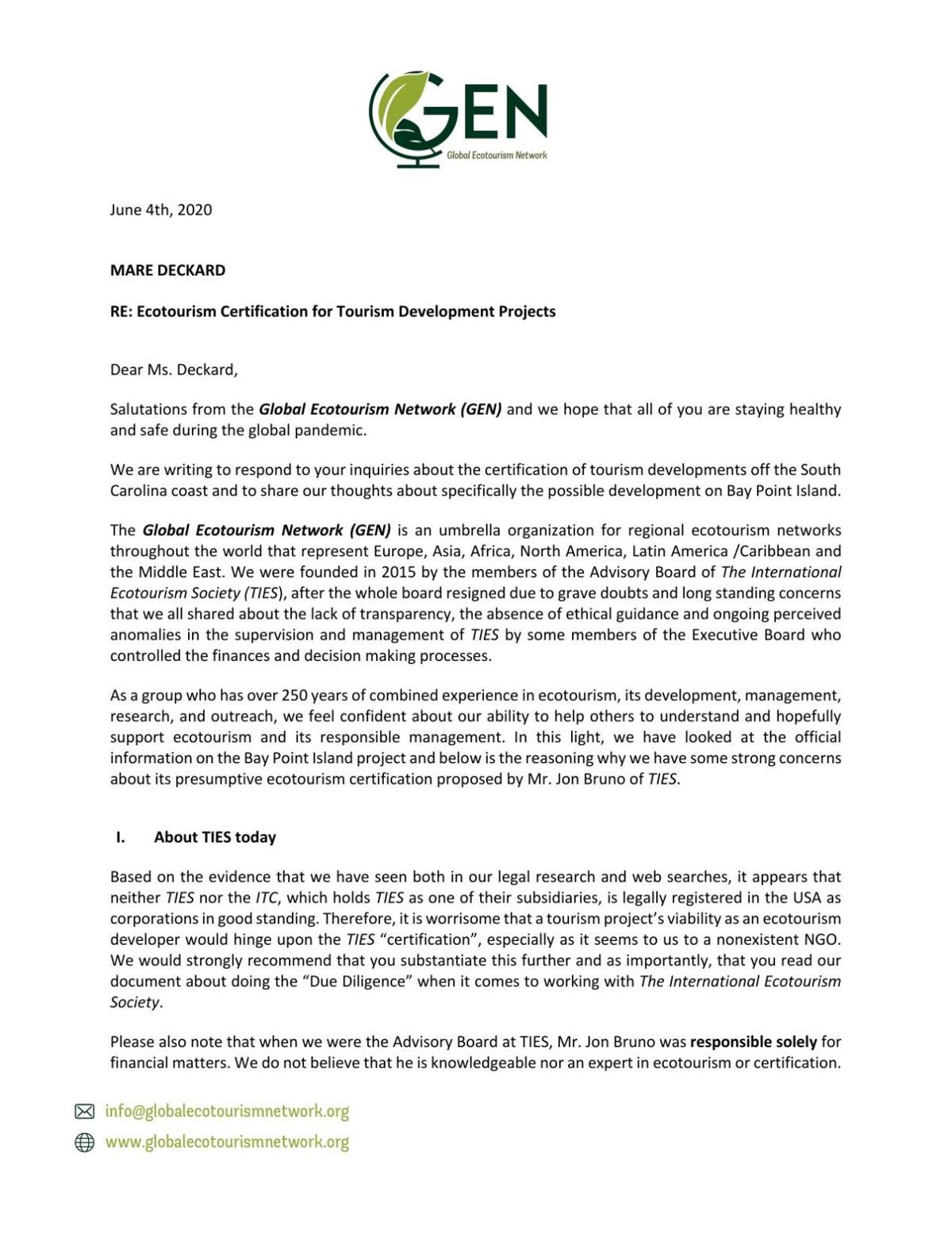 "I was paid my expenses and a daily rate to fix up the communications materials, which is what I saw the weakness was," Bruno said, explaining that he thought the plans were initially rejected not because they didn't match the ethos of ecotourism but because the project's backers didn't communicate their conservation plans clearly enough to the county.

Jampol of GEN said that he strongly recommends that a "credible and professionally researched" environmental impact assessment be done on the resort proposal. He also said that climate change should be considered as a major risk factor.

"We feel that any community or investor serious about development on a barrier island that is susceptible to hurricanes and affected by rising sea levels, should have made this a key component of their evaluation," Jampol said in a letter sent to the Coastal Conservation League, one of the earliest and most ardent opponents of the Bay Point Island project.

From a "purely financial standpoint," Jampol added, the developers could be assuming a big risk.

Juliana Smith, south coast project manager with the Coastal Conservation League, said it concerned their group to see island owners turning to an organization with "questionable credibility" instead of "local organizations that have deep-rooted relationships with the community, land and wildlife."

She described it as "even more troubling" that Beaufort County turned to TIES for expertise, too.

According to emails shared by Bruno with The Post and Courier, Beaufort County staff was in touch with him in mid-January to get his opinion on the resort plans. Bruno also participated in a county review meeting in early May ahead of staff's official decision to allow the plans to advance to the zoning board.

In recent months, the coronavirus pandemic has made it impossible to host the type of town hall-style meetings that developers said they intended to have as a way to discuss concerns with local residents and groups.

In May, some virtual sessions were hosted with community members, but objections were raised then about who was able to participate.

Many native Gullah-Geechee people don't have online access in their homes, Marquetta Goodwine, who goes by Queen Quet as Chieftess of the Gullah/Geechee Nation, had pointed out.

Since Thursday's Zoning Board of Appeals meeting was canceled, the board will hear the request no earlier than next month.

Beaufort County staff is recommending that the Bay Point proposal does satisfy county requirements, but only if specified conditions are met, like the creation of a foundation that would be responsible for overseeing conservation efforts.

According to staff's analysis of the application, the proposal is appropriate "only if the conditions, safeguards and agreements" staff laid out for the board are imposed as part of the special permit approval.

Allowing the resort to proceed could set a precedent with wide-reaching implications in the county, said Smith of the Coastal Conservation League.

"We hope the Zoning Board will recognize this project for what it is — a resort — and deny permission of the ecotourism special use," she said.

The Coastal Conservation League hosted a webinar Tuesday afternoon to discuss the ways the group anticipates the resort could be costly to Beaufort County residents.

Queen Quet said the Gullah/Geechee Nation's position on the project has not changed and said they also hope the Beaufort County zoning board will reject the plans as an appropriate use for the island.

The environmental groups that have come out against the plans, and the native Gullah-Geechee people who have put their names to the petition "should be the voices that are heard," she said. "We refuse to back down from our position."