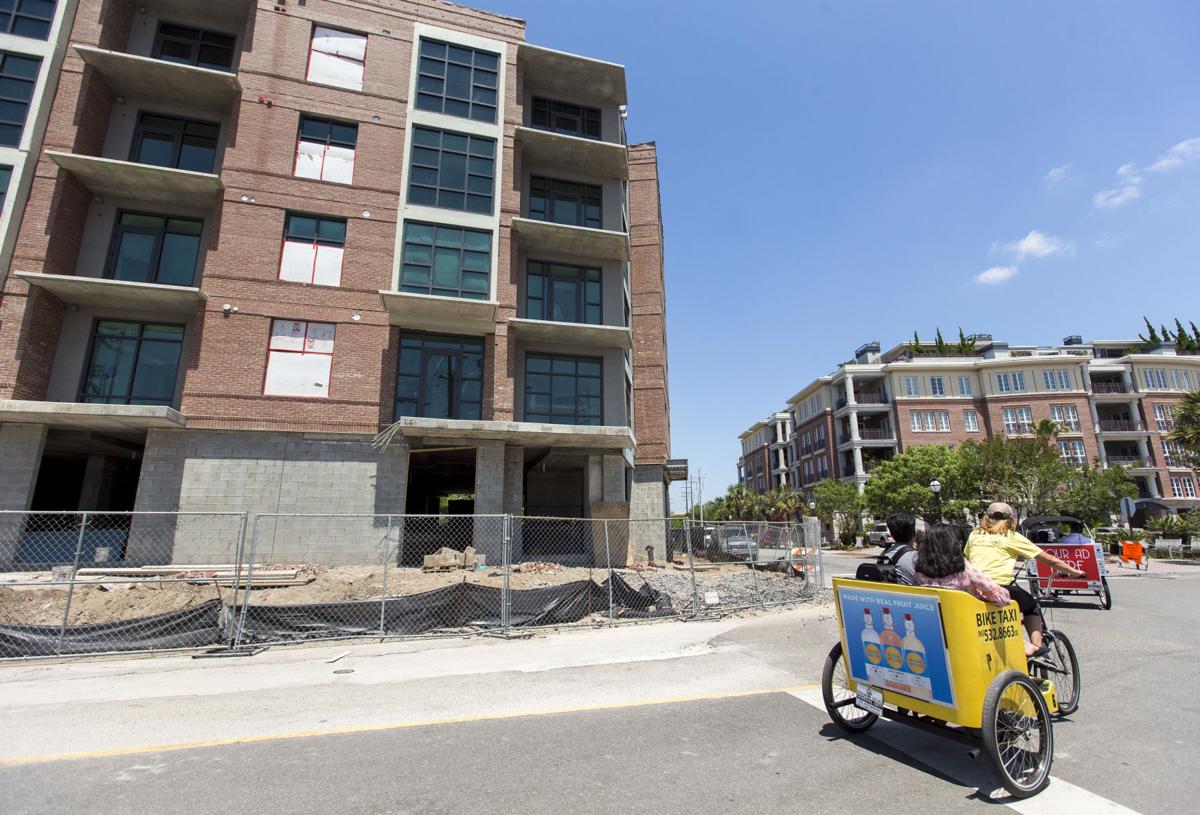 A Charleston rickshaw passes by the Gadsden condominium building at Laurens and Concorn streets. The development has touted the area's history, without mentioning slavery. Gadsden's Wharf was the site of the last legal slave-trading in Charleston. Andrew J. Whitaker/Staff

The timeline on The Gadsden's website mentions that Christopher Gadsden built a large wharf on the Cooper River, but doesn't mention that it was the center of the city's slave trade in the early 1800s.

It's named for one of the city's most prominent 18th century residents, Christopher Gadsden, and it's being built on top of the wharf he built.

Its marketing materials even tout the wharf's size — the "largest built by one man in America."

It doesn't mention, however, the wharf's role in one of Charleston's darkest chapters: the final years of its slave trade.

It's not that the developers don't know about the horrors of Gadsden's Wharf or the tens of thousands of enslaved Africans who reached America there. Miller Harper, managing partner of East West Partners, said his firm wrestled with how to present the site before deciding to leave the historical interpretation to the experts.

The condos are rising only a few hundred feet from the future site of the International African American Museum, an ambitious effort to lay out the city's dark past.

The museum has drawn national attention to the history of the wharf. It was where Africans were brought into the city during the most frenzied period in the American slave trade — the years before the import of slaves was banned nationwide in 1808.

In the months that followed, slaves were held in warehouses as traders kept them off the market. They wanted to profit from the growing scarcity of newly imported slaves, according to research by Charleston County Library historian Nic Butler. Hundreds died.

Butler's research indicates Christopher Gadsden wasn't alive when the city's slave trade moved to his wharf. It had been scattered across several points downtown before it was directed to Gadsden's Wharf by act of City Council in early 1806, just days after his wife died.

Over the next two years, some 200 ships are thought to have docked at the wharf, carrying tens of thousands of slaves from West Africa. The condo building's timeline, titled "area history," ends in 1789.

"It's not only partially complete but it's misleading, particularly in a place like Charleston," said Bernard Powers, a College of Charleston history professor who advises the International African American Museum. "If you know anything about the history of the place, then what's being said here has some profound absences of fact."

The timeline, he said, is "emblematic of the ongoing need to tell the complete story."

Harper, who runs Colorado-based East West's work in South Carolina, said his firm wanted to allude to names in the area (a park next door and a street behind the building are called Gadsdenboro) and the person they were inspired by. He says it's a way to signal there's deep history in the area while encouraging residents to learn it.

"What we try not to do is interpret it for people. Let them ask the questions and engage themselves in that history," Harper said.

The timeline offers a few tidbits about Gadsden's life, like how he was a patriot who led a reading of the Declaration of Independence and also a merchant who advocated for home-spun textiles instead of foreign imports. He was a key figure in the Revolutionary War — he's still known for his "Don't tread on me" flag — and he cast an Electoral College vote for George Washington's first term as president.

But Powers said it could have acknowledged that slavery was central to Gadsden's life, even if no slaves came through his wharf while he was alive. He was a major slave owner, both at home in Charleston and on two rice plantations he owned. He also occasionally engaged in the slave trade.

The issue of the condo building's presentation of history was first raised by Nathaniel Walker, a College of Charleston professor who studies architectural history. He called the developers' omission of slavery "willful forgetfulness."

Michael Boulware Moore, the museum's chief executive, said the timeline might have raised questions if he hadn't met the developers, but he said he understands they didn't mean to compile a comprehensive history of Gadsden's Wharf.

His museum is. It's aiming to "broaden the narrative to be more historically inclusive."

That's a challenge far larger than a single development. Walker calls the condo's omission "a symptom of a larger condition" in Charleston — a city that cherishes history but struggles to reckon with it, horrors and all.