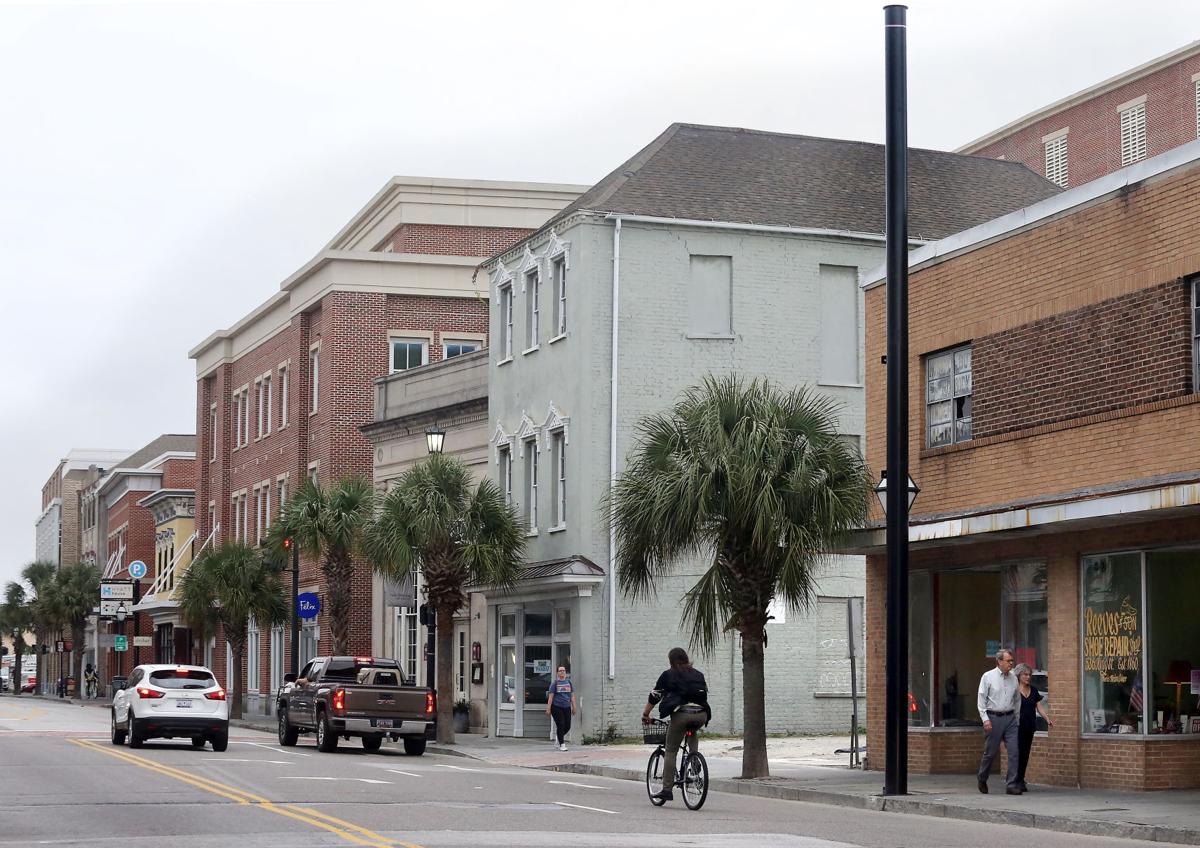 Texas-based wireless infrastructure company Crown Castle is building utility poles around downtown Charleston, like this one in front of 538 King St. A Charleston City Council member wants the city's regulations on 5G cell tower development to include a no-install zone around school buildings, neighborhoods and daycare facilities. File/Brad Nettles/Staff 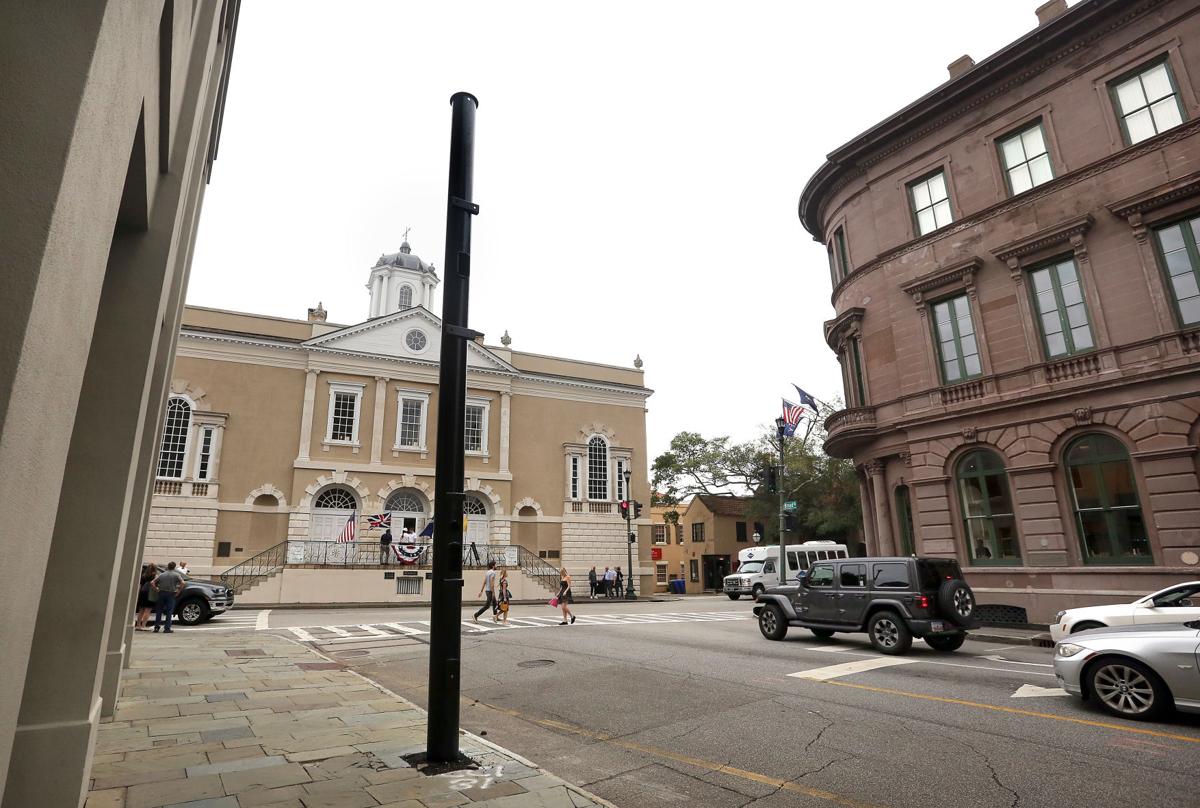 Texas-based wireless infrastructure company Crown Castle is building utility poles around downtown Charleston, like this one at the corner of Broad and East Bay Streets. Crown Castle is at the tail end of a drawn-out conflict with the City of Charleston to seek permission to build the poles and new wireless internet technology on city property. Brad Nettles/Staff 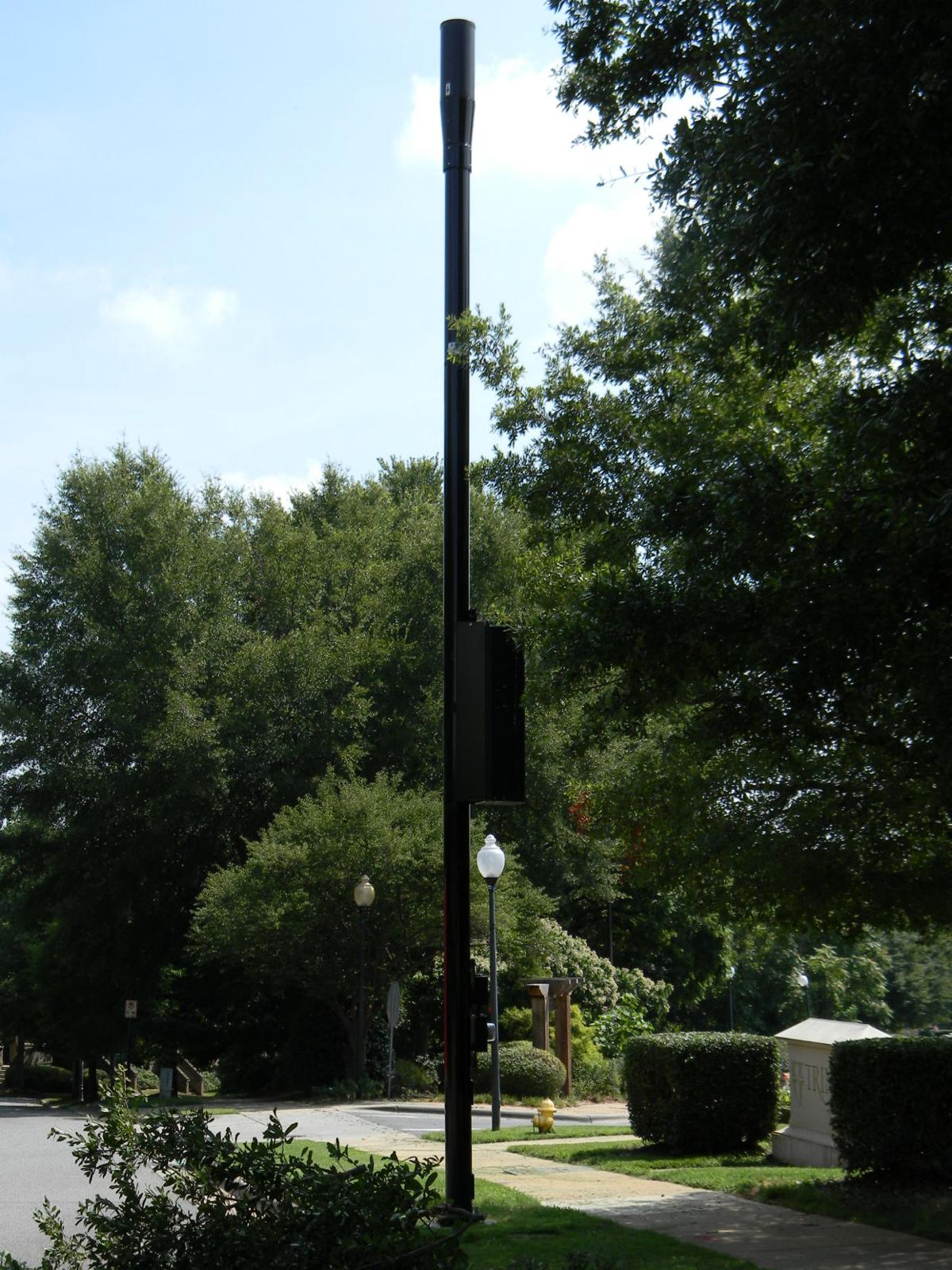 One of Crown Castle's small cells is shown in Charlotte. The antenna, installed on the top of the pole, can accommodate multiple wireless carriers. Crown Castle rents the rights to use the small cell. Many of the poles in Charleston will also bear a street light; Crown Castle also will install the devices on existing, wooden utility poles.

A vast network of backpack-sized antennas is about to be built overhead in Charleston and other cities as telecommunications companies seek to stake a claim on the industry's latest frontier.

It's called 5G, and it's described as the next generation in wireless technology. The antennas, called "small cells," are key to that, as they will enable internet providers to deliver unprecedented download speeds to their customers.

Not everyone is impressed. Many local governments are complaining that the fast-moving 5G wave has stripped them of their rights to regulate the use of their public rights of way.

They point to a new rule from the Federal Communications Commission that gives internet providers broad access to municipal sidewalks and utility poles. It's part of an effort to accelerate investment in the worldwide web's backbone as the United States races China for 5G dominance.

Typically, the general public doesn’t consider the physical infrastructure that’s required for downloading a movie on a smartphone or calling up a map to plan a trip, said John Ballato, a professor of materials science and engineering at Clemson University.

The “wireless” part of wireless internet refers to the air between an electronic gadget that's seeking a broadband connection and the technology that makes it happen, Ballato said. He described the small cell antennas as a sort of “listening and speaking device.”

“It is the entry point to this global network of information that is really just pulsing like your heart does all over the world,” he said.

The cells are linked to each other by way of miles and miles of fiber optic lines, which are usually laid underground. If 5G is to succeed, internet providers need to bury more cable, Ballato said. It also will require a larger concentration of towers and small cells.

Simply put, 5G will be faster and capable of transmitting more data. Its rollout is becoming more urgent as new technologies, such as self-driving cars, require a high-speed internet connection.

It's also no small matter that the United States is behind China on the 5G front. A Deloitte analysis found China outspent the U.S. on wireless infrastructure by $24 billion between 2015 and 2018. On Friday, phone carriers in China began offering the ultra-fast service widely to customers.

“China and other countries may be creating a 5G tsunami, making it near impossible to catch up,” Deloitte researchers wrote.

In the U.S., companies have begun introducing 5G pilot programs. AT&T claims the widest rollout so far, with 21 cities. Verizon lists 15, while T-Mobile and Sprint are in fewer than 10.

None are in South Carolina, but that doesn't mean the state isn't in the thick of the small cell debate.

Downtown Charleston is getting gigabit internet service — for real this time

The FCC stirred the pot when it issued a rule last year barring local governments from standing in the way of small cells and other critical internet infrastructure. It required municipalities to craft and pass new rules regulating for the installation of the devices on public property.

The FCC also set a rough limit to how much governments could charge companies for using the public property: $270 per small cell, per year.

Crown Castle, which owns about 75,000 miles of fiber-optic cable across the United States, is in the installation business in South Carolina and other states. CEO Jay Brown told investors on a recent earnings call that 70,000 of the Texas company's small cells are “on air or under construction,” with more to come.

“We believe we are still in the very early innings,” he said.

Indeed, hundreds of thousands of small cells will be installed in the coming years, the trade group CTIA has predicted.

Crown Castle acts as a landlord, leasing the rights to its cells to 5G providers. It's been a challenging ramp-up process, according to Brown, who told analysts the company has run up against months of delays with cities and utilities.

So it's been pushing back. Since early 2017, Crown Castle has filed federal lawsuits against at least 19 local governments, including the city of Charleston, according to court records. The complaints allege municipalities have stalled, missed approval deadlines and charged unreasonably high fees.

Ann Brooks, a government affairs manager for Crown Castle, said the Houston-based company is doing its best to propose small cell projects that blend in. She said collaboration with local officials is key, though some have been more receptive than others.

She added that wireless networks need to keep pace with the "insatiable demand for data" among consumers and that governments that get on board will see an economic boost as a result.

“Small cells are a part of our portfolio that is growing in importance," she said. "We’re fully committed to this infrastructure across the country.”

Some municipalities remain resistant, largely because of how the FCC changed the ground rules. In Myrtle Beach, for example, the first antennas have not gone up yet. But that hasn't stopped Grand Strand officials from contesting the new federal access rule, arguing in part that they're being put in a position that they “cannot say ‘no’” to any company that wants to install small cells. Other municipalities have raised similar objections.

Mark Kruea, public information officer for Myrtle Beach, said the FCC's "one-sided" order failed to consider local points of view. Allowing the antennas would undermine the millions of dollars the city has invested in its rights of way, he added.

Charleston also opposes the FCC order in principal, though not formally, said Susan Herdina, an attorney for the city.

“It really broadly swept away the city’s discretion,” she said. “Cities have always had authority over their public rights of way.”

From a permitting perspective, small cells are new territory, Herdina said. Because Crown Castle is mostly interested in peninsula installations, city staffers are worried about aesthetics and historic value. Another concern is whether hardware that's placed on or near the ground would impede accessibility for people with disabilities, especially along narrow sidewalks.

The city has denied some of the installation requests, including one proposed near the Joseph Manigault House on Meeting Street and another near the Four Corners of Law at Broad and Meeting streets.

While it has not yet started installing its small cells in downtown Charleston, Crown Castle has been putting up new utility poles in some areas. Some examples can be found near the Old Exchange and Provost Dungeon, on Vendue Range and on parts of King Street. In other cases, its will use existing poles.

Small cells have already gone up throughout other South Carolina cities, including Columbia and North Charleston, and wireless companies say they plan to continue to roll out 5G networks across the country.

Less clear is when the average consumer will be be able to upgrade to the blazing fast technology. The first wave of 5G networks are largely geared toward businesses.