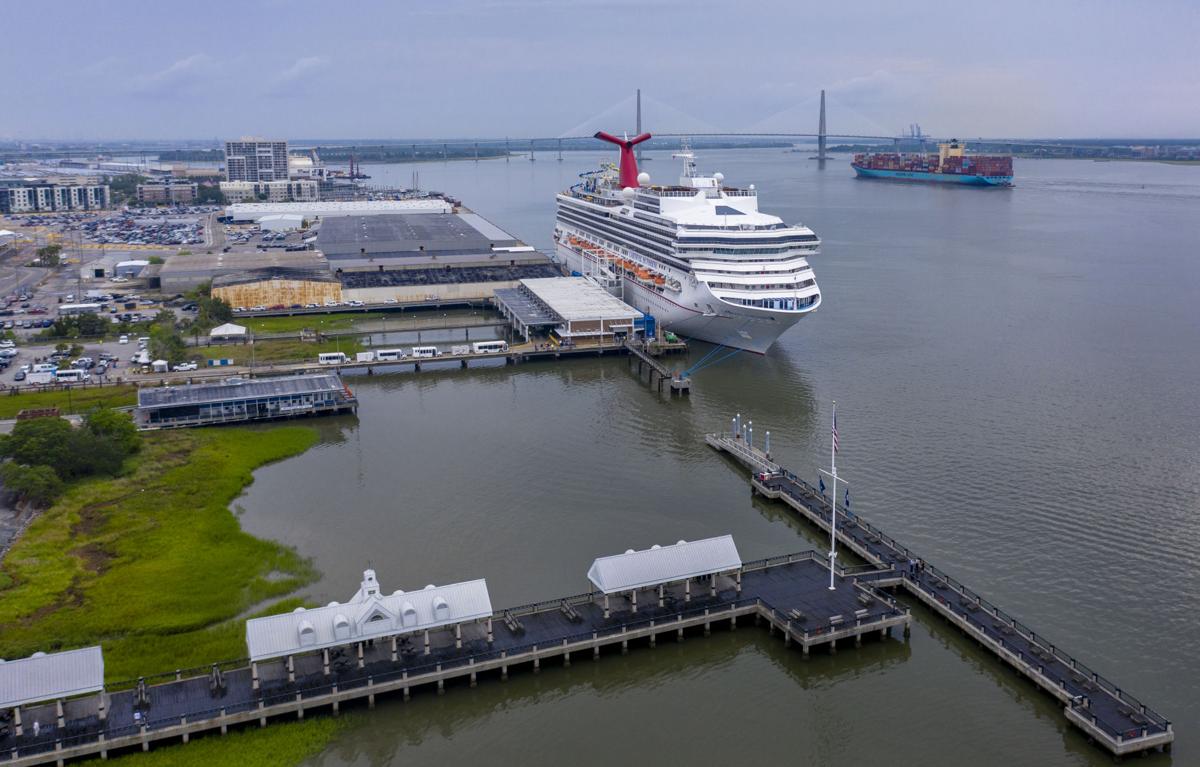 The Carnival Sunshine is docked at the State Ports Authority's cruise terminal in Charleston on Thursday, June 6, 2019. Charleston is considering a head tax on cruise passengers to help pay for infrastructure that will help solve downtown flooding. File/Lauren Petracca/Staff 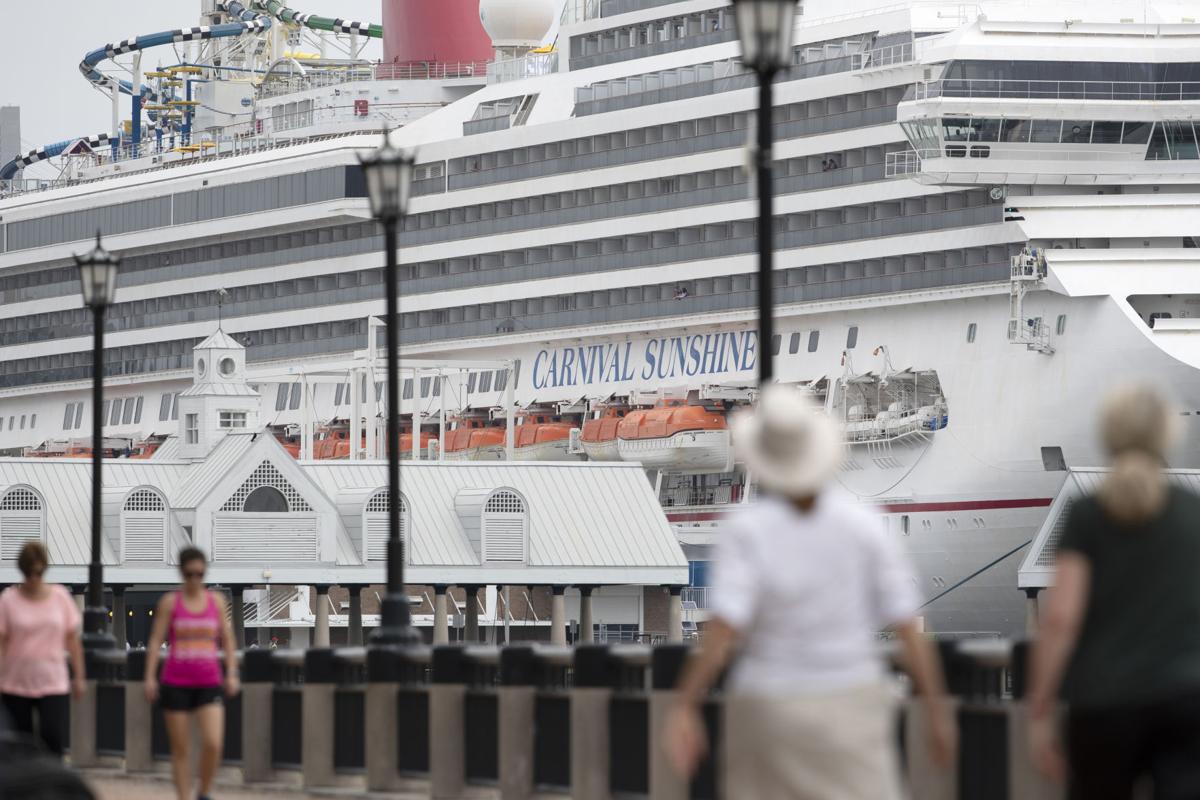 The Carnival Sunshine is docked at the State Port's Authority cruise terminal in Charleston on Thursday, June 6, 2019. The authority says it is opposed to charging a head tax to cruise passengers to help pay for flood-control infrastructure in Charleston. File/Lauren Petracca/Staff 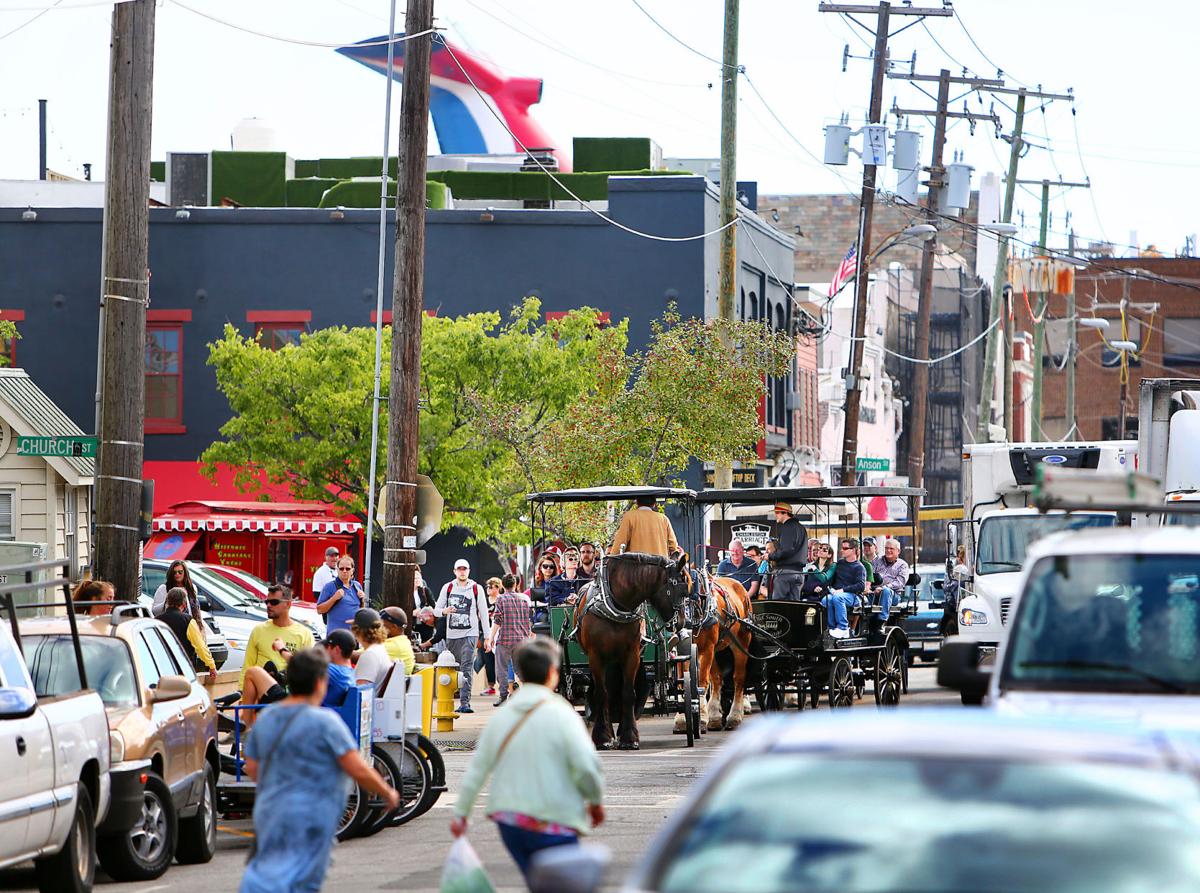 A cruise ship smokestack rises in the background of North Market Street's restaurants, shops, nearby hotels and tour businesses. File/Staff

The long-running debate over whether cruise ship passengers must help pay for improvements to downtown Charleston is getting new life as city officials look for ways to solve the peninsula's flooding crisis.

Mayor John Tecklenburg in his inauguration speech this month called flooding and drainage a challenge that's "nothing less than existential" and wants the state Legislature to create a way for Charleston to collect new fees from tourists — "including cruise ship passengers," he said — to help fund a solution.

"To truly begin solving this problem, we simply must ask our city’s 8 million-plus annual visitors ... to help save the city they love," Tecklenburg said.

The idea, according to city spokesman Jack O'Toole is to "begin a serious conversation with our partners at the state level" on how the city can get the money it needs for the large-scale and expensive flood-control projects needed to combat rising sea levels and climate change.

That could include changes to the state's accommodations tax law which currently prohibits spending of tourist dollars on most of those projects, or other measures taken lawmakers in Columbia.

A head tax on cruise ship passengers would likely be the most contentious of those ideas.

The S.C. Ports Authority vows to oppose any attempt to hit passengers of pleasure ships docking at Union Pier with extra fees.

"We're not in the tourist business. We're in the maritime commerce business," said Jim Newsome, the authority's president and CEO.

"The city doesn't have the right to tax maritime commerce, so we think it's an idea that doesn't have legs," he added.

That theory was tested recently at another cruise destination: Juneau, Alaska.

The Cruise Lines International Association Alaska sued the city of Juneau over the $8 per passenger fees the city was imposing on cruise ships to help pay for waterfront infrastructure. A federal judge ruled in late 2018 the fees violate the U.S. Constitution.

Specifically, the federal Tonnage Clause forbids states from charging fees to ships "for the privilege of entering, lying in or trading in a port" without the consent of Congress — something that's only happened once.

Coincidentally, that 1804 exception let Charleston impose duties on ships for three years to fund construction of a hospital.

Cities can negotiate with cruise lines for voluntary fees that help pay for services and improvements, but they can't mandate them. In Juneau, for example, the city and cruise lines ultimately agreed to let the passenger fees continue, but only if the cruise lines have a say in how the money is spent.

"There are a lot of things that the industry and the municipalities and the state will agree are beneficial," Jonathan Benner, the Alaska cruise line association's lawyer, told Alaska Public Media. "And they can come to agreement on those kinds of activities. They just have to sit down and talk to each other a little bit about them."

O'Toole said that is what Tecklenburg has in mind.

Carnival hasn't said how it would react if Charleston were to impose a head tax. But the cruise line said it has already worked with the city and the authority on a plan to minimize the industry's impact. That 2010 plan calls for a voluntary limit of 104 cruise ships per year and no vessel larger than 3,500 passengers.

"That plan has worked for 10 years and we still think it's a very sound deal," Newsome said.

The S.C. Ports Authority charges a passenger fee as part of its contracts with the cruise lines. The authority said it does not share contract details publicly.

The money from those fees pays for the infrastructure needed to serve the ship and its passengers while docked at the authority-owned Union Pier, including payments to off-duty city police officers who volunteer to help with traffic control near the terminal. In 2019, for example, the authority paid $161,159 to city police officers and $5,736 to the city for the use of police vehicles.

"We pay for every bit of infrastructure that we consume to support the loading and discharging of cruise ships," Newsome said. "There's not that much infrastructure to begin with."

Newsome said it would not be fair to tax passengers because many of them don't leave the ship when it's docked. And a Summerville resident hopping on a cruise ship at Union Pier for a trip to the Bahamas shouldn't be considered a city tourist, he said.

"It's not really a significant impact on anyone," Newsome said.

The idea of a head tax isn't new. In 2015, the city's Tourism Advisory Committee recommended studying the possibility of a fee, calling the increase in cruise ship traffic "one of the challenges of the present moment."

City Councilman Mike Seekings in 2018 proposed a $25 fee per passenger, saying it would raise $8 million a year to help address flooding, affordable housing and other problems. Such a fee would raise more these days with bigger ships calling on the port.

Seekings, who represents much of the city's downtown district, also promoted the fee during his unsuccessful run for mayor last year.

"Residents deserve to directly benefit from the cruise ships calling on our port," he said.

The Historic Charleston Foundation has also advocated for a head tax.

But the proposals have never gotten beyond the talking stages.

Tecklenburg is hoping the urgent need to improve city drainage infrastructure — some of it dating to the 1800s — will push the issue to the forefront as Charleston struggles with rising sea levels and a booming population.

"It's part of the larger conversation that we need to have with the state about allowing our visitors to help protect the city from flooding in the future," O'Toole said.