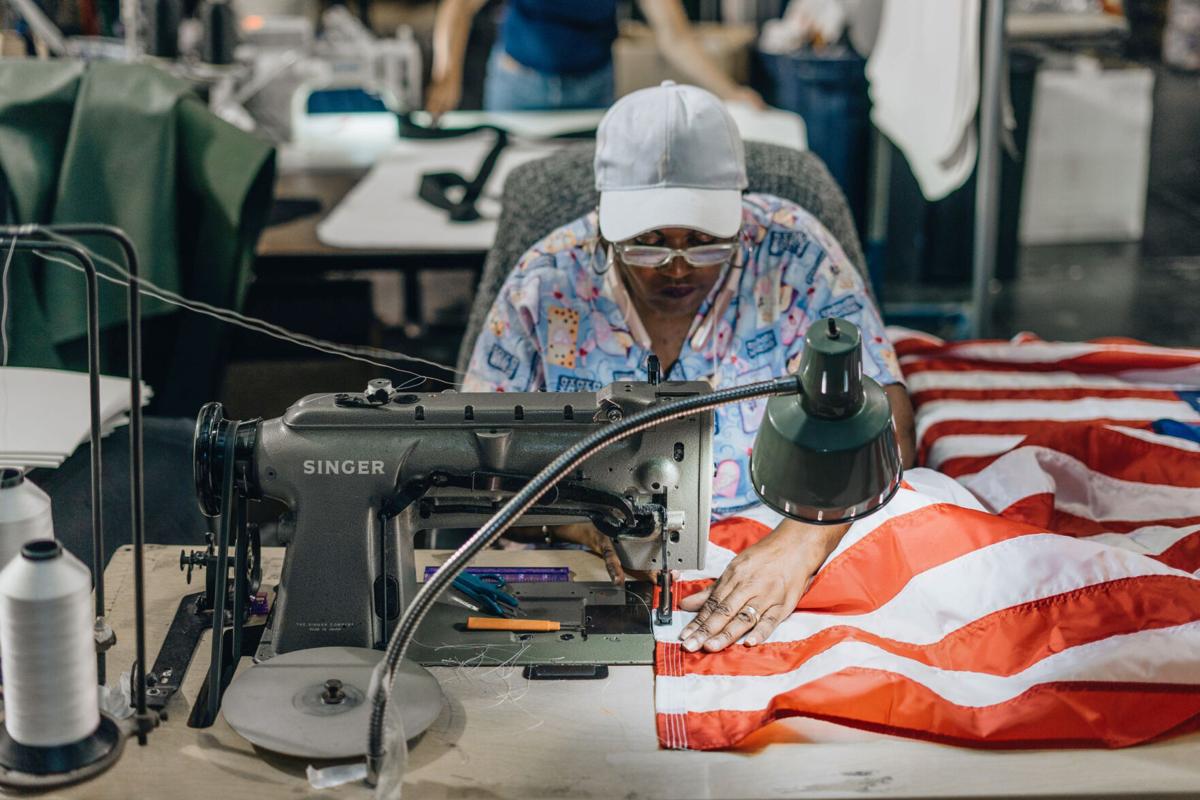 A seamstress at the Allegiance Flag Supply sewing factory in Vidalia, Ga., puts the finishing touches on a U.S. flag made for the growing North Charleston business. Cameron Wilder/Provided 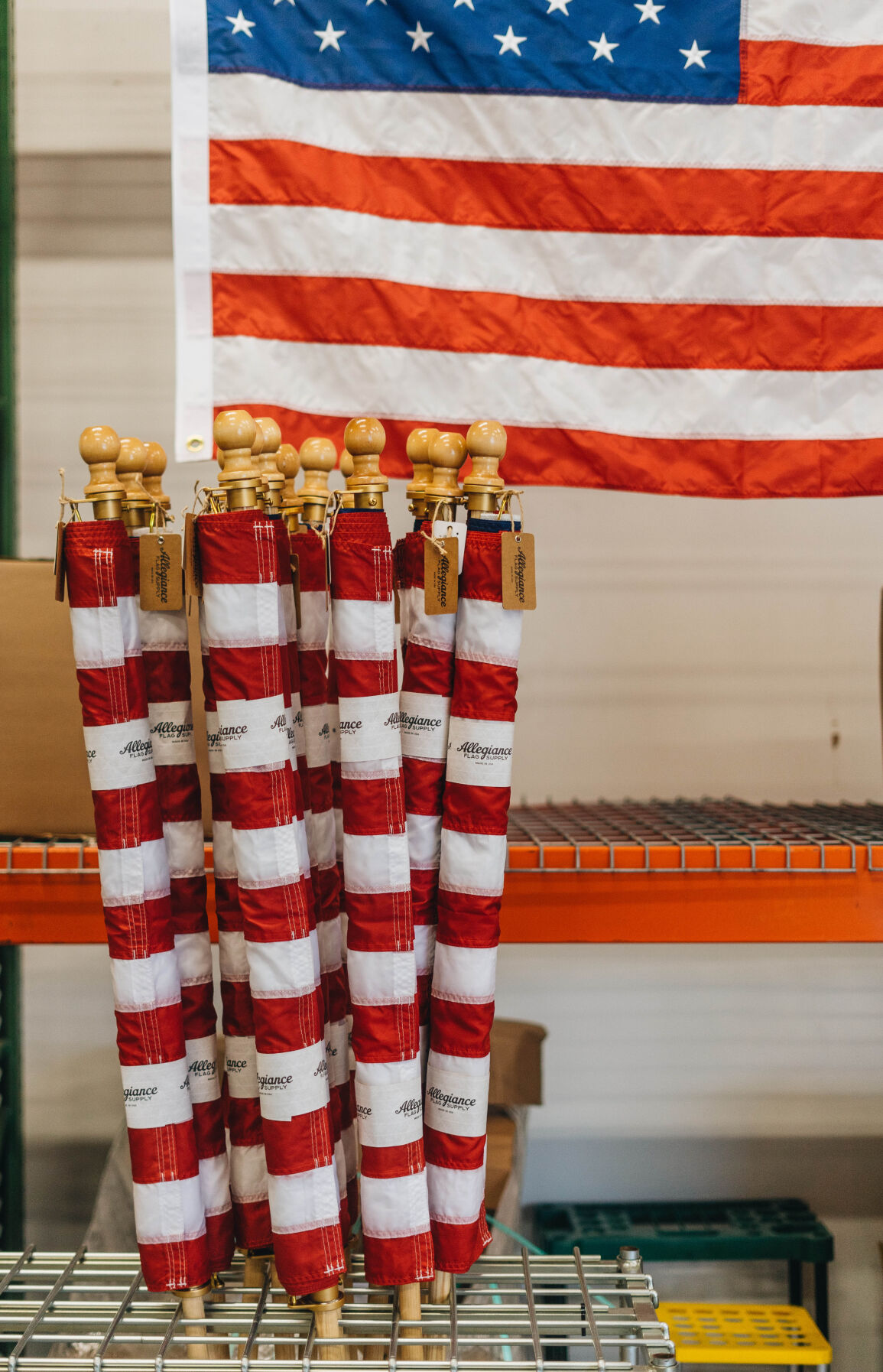 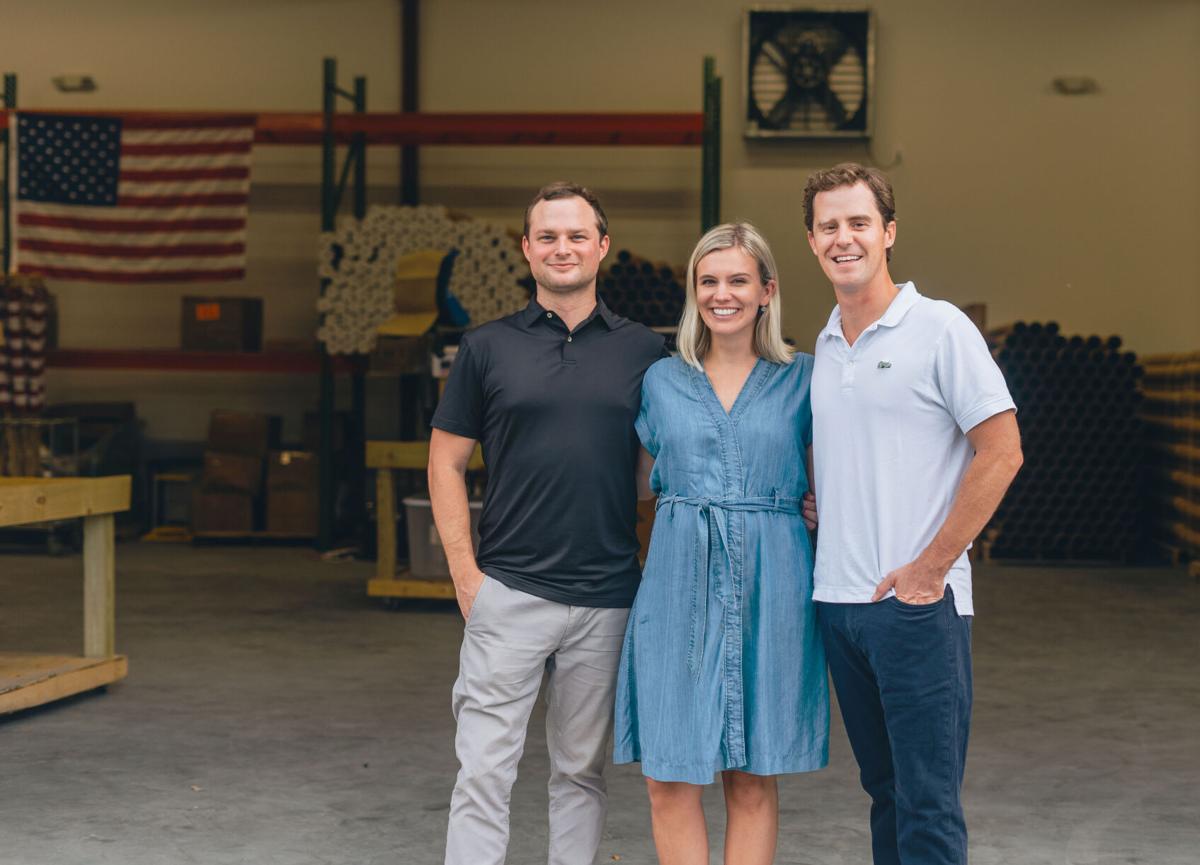 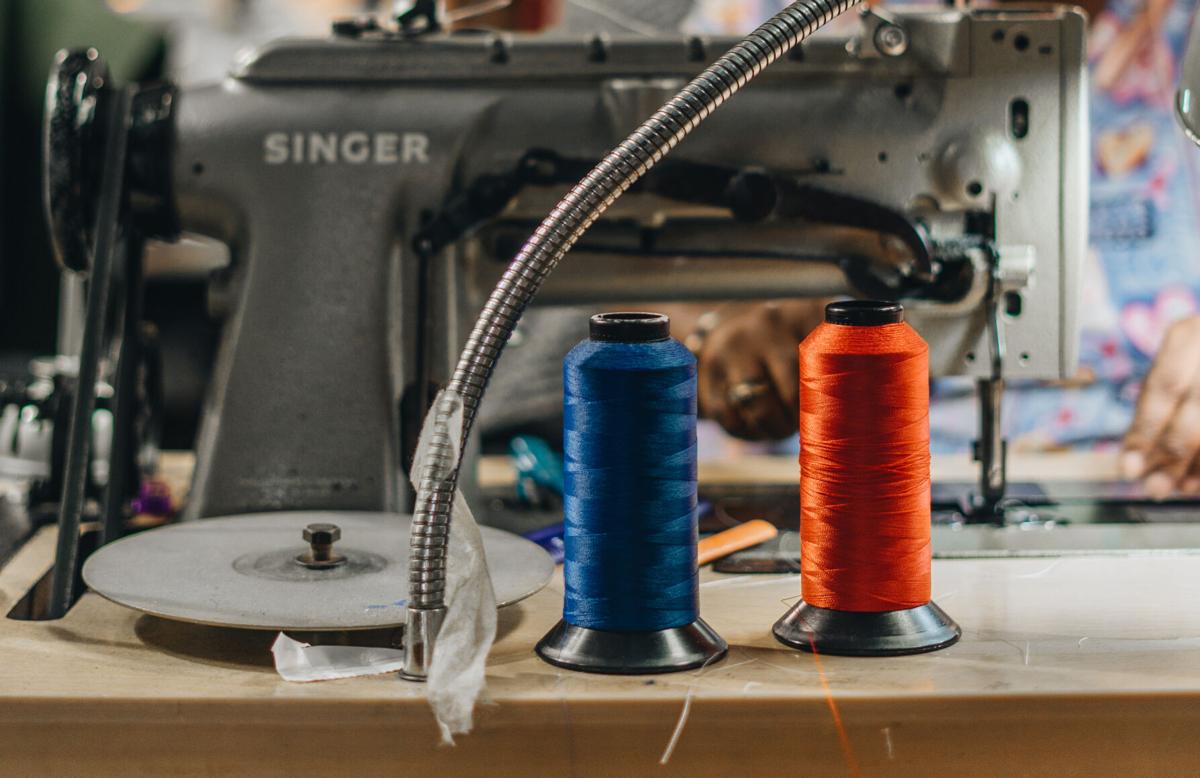 Wes Lyon wasn't happy about having to change out the American flag he and wife Katie flew from the front porch of their Charleston home.

"We were replacing it every three or four months," said Wes Lyon, one of the founders of Allegiance Flag Supply in North Charleston, which makes high-end U.S. flags that are built to last. "The flags we bought from the big-box stores would be torn and mildewed in no time, and they'd get wrapped around the pole — it was a constant nuisance."

"We started thinking to ourselves, 'Is there anyone out there making high-quality flags with craftsmanship?'" he said. "There really wasn't a company doing that, so we created one."

From a small garage operation that started two years ago, Allegiance recently moved into a North Charleston warehouse where about 1,000 flags are packaged and shipped to customers across the country each week.

The Lyons — he has a background in sales while she has online marketing experience — teamed up with childhood friend Max Berry, who had been working in hotel finance, to build the company from the ground up.

Sales were slow at first, and the trio experimented with offering other types of flags before finding their niche with Old Glory.

"When we first started, we had very high expectations," Katie Lyon said. "We had to go back to the drawing board a little bit and learn what it takes to build a brand. We can say we have the best-quality American flag out there, but there's a lot of work that goes into getting customers to believe us."

The trio found a third-generation, family-owned textile factory in Vidalia, Ga., that was in need of work and hired the business to produce the flags. It started with one or two seamstresses handling the trickle of orders sent from the Lyons' garage. These days, there are 10 seamstresses dedicated to flag making.

"They're working on adding more lines to support us," Wes Lyon said. "One of the things that makes us really proud is the fact that we've been able to contribute to more American jobs."

The flags are made with heavy nylon fabric and double-stitched to prevent them from unraveling. Stress points are reinforced with bar tacking, and a mold resistant grommet strip is added for stability. Allegiance also makes wood poles from Vermont white ash, with metal spinners that rotate as the flag is blown by the wind so it doesn't get tangled. The flags are tri-folded military-style and shipped in triangle-shaped boxes.

Hundreds of customers have testified to the flags' quality, and most of them have sent Allegiance photos of the Stars and Stripes flying at their own homes, which the company includes on its website.

As the presidential campaign started to heat up about nine months ago, so did Allegiance's business. Word-of-mouth and website advertisements started catching the attention of people who wanted flags that were well-made and American-made. That's when the founders quit their day jobs to give Allegiance their full-time attention.

"I think there was a huge push for American pride," Katie Lyon said. "It was also about the same time COVID-19 hit. People were staying home and taking care of home improvement, upgrading their flags."

Flag sales tend to spike during holidays such as Veteran's Day, and Allegiance recognizes its military customers with donations of its products to families of soldiers returning from overseas and discounts.

A SC man found a box of WWII medals. A year later, he found the family to return them home.

The three founders have bootstrapped the company's growth on their own, and they take every customer's call themselves. Knowing that Allegiance succeeds or fails on their own terms — there's no "shark" in the background propping things up — keeps them motivated.

"We haven't taken money from anybody — not from family, no venture capital group, no angel investors or anything like that," said Berry, who acknowledges there have been some lean times. "We're certainly not paying ourselves as much as we made in our corporate lives, but we wake up every morning just absolutely thrilled to do this. We're passionate about the American flag and what it represents, but we're also passionate about our own lives and the freedom that entrepreneurship brings us."