A Charleston County strip club is being sued by a group representing songwriters for playing music without compensating the copyright owners.

The lawsuit filed this week names GoodFellas Cabaret at 2028 Pittsburgh Ave., which is between the Charleston and North Charleston city limits.

It was filed by the American Society of Composers, Authors and Publishers. ASCAP collects royalties for songwriters and music publishers and claims to represent the copyright owners of at least several songs played over the club's loudspeakers.

GoodFellas is owned by JBCM Holdings LLC, whose principals are John Bailey and Clifford McGehee, according to the complaint.

JBCM's parent company, which is not named in the lawsuit, is Heavy Man LLC of Jacksonville, Fla. Scott Hendrix of Heavy Man said he and the other partners in the business aren't convinced that ASCAP actually has the rights to the music.

He said GoodFellas subscribes to and has a licensing agreement with another entity called Virtual DJ.

“So I don’t know who’s got the rights to the music," Hendrix said Wednesday. "The DJ service says they do. These guys say they do.”

The complaint says that ASCAP tried to contact the owners more than 30 times since December 2016 by mail, email, phone and in person.

"It is rare that we sue establishments," Jackson Wagener, ASCAP's vice president for business and legal affairs, said Wednesday. "A lawsuit is always the last resort."

Hendrix said the club has responded.

"We have requested the documentation," he said. "Show us the contract. We’re not trying to get away with something. If we use somebody’s music, we pay for it. We’ve been doing that for years.”

ASCAP also announced similar lawsuits against 10 other bars and restaurants across the country this week. When asked how GoodFellas managed to show up on ASCAP's radar, Wagener said the group's licensing managers monitor web pages and social media of popular venues.

"Identifying places that use music is not that difficult," he said.

The cost of a license varies according the nature of the business, Wagener said. A typical bar or restaurant pays about $60 a month, depending on frequency and the size of the establishment. GoodFellas, an adult venue with an occupancy of about 400, was being asked to pay about $300 a month, he said.

About 4,000 bars, clubs and restaurants in South Carolina pay the license fee, according to ASCAP spokeswoman Cathy Nevins.

The lawsuit cites four songs that were played without a license at GoodFellas on Oct. 10, 2017. They were "Gonna Make You Sweat" by C+C Music Factory, "I Wanna New Drug" by Huey Lewis and the News, "Moon Baby" by Moonsmack and "Trap Queen" by rapper Fetty Wap.

"For the most part, businesses that are using music do the right thing, so songwriters are properly compensated for the use of their property," Wagener said.

The complaint is seeking a court order to restrain GoodFellas from playing the songs anymore without a license and for damages of up to $30,000 for each infraction, as well as attorney fees.

ASCAP is based in New York City.

This is not the first time a business in Charleston has been sued over licensing. In March 2008, ASCAP sued Charleston Beer Works. The suit was dropped in May of that year after a confidential settlement was reached, Nevins said. 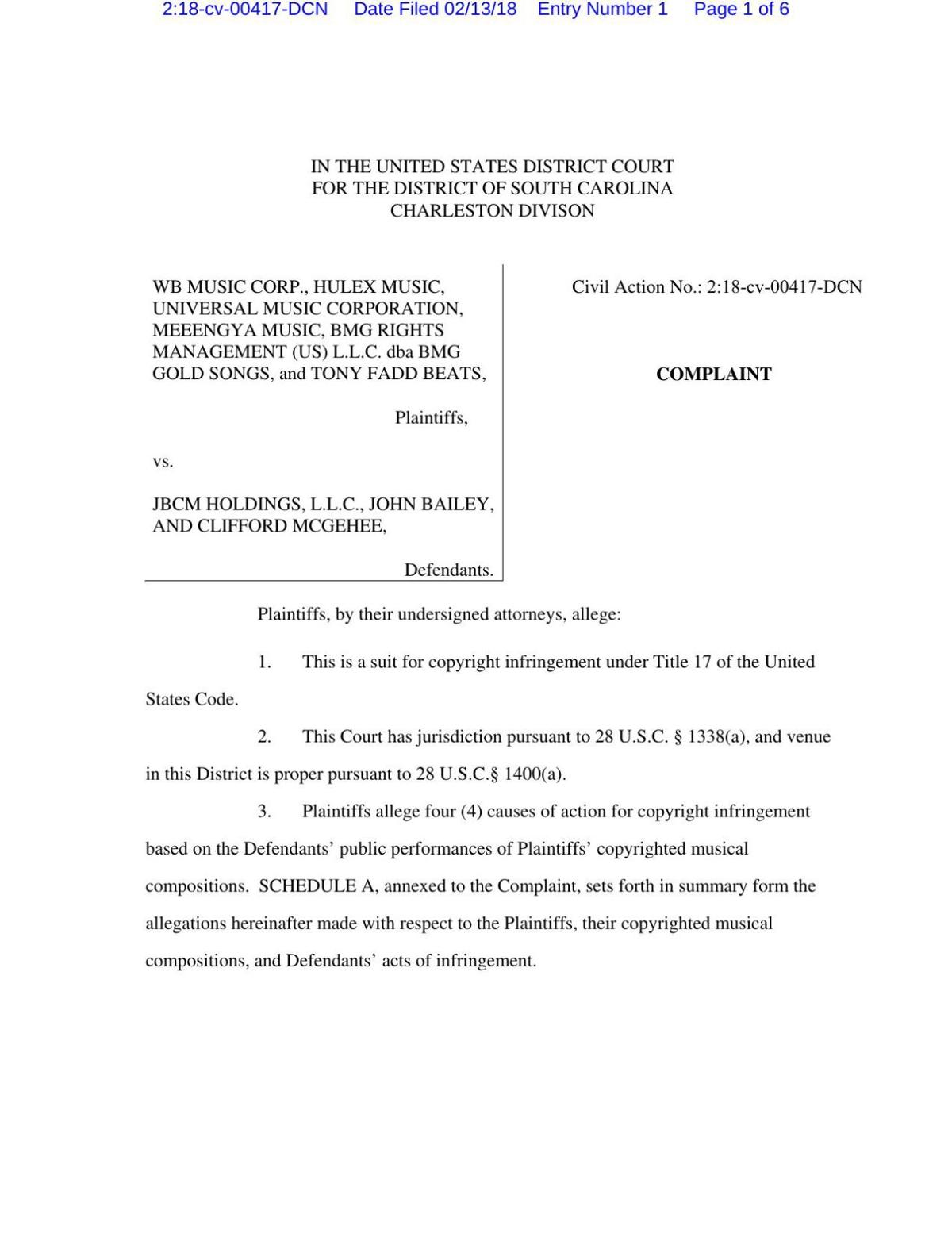