The simmering feud over Charleston's carriage horses has flared up into a lawsuit claiming libel, defamation and  conspiracy — as well as a violation of the Animal Enterprise Terrorism Act.

The complaint, filed on Tuesday in Charleston County, alleges that the two groups knowingly put out false information to discredit the carriage operators, including claims that a horse that had tripped had collapsed and died from heat exhaustion.

The Animal Enterprise Terrorism Act is a federal law that was passed in 2006 to rein in animal activists, particularly those protesting the use of animals in medical experiments. The complaint points out that the law prohibits "damaging or interfering with the operation of an animal enterprise” or conduct that “places a person in reasonable fear of the death of, or serious bodily injury to that person."

The lawsuit alleges the two groups used "social media to create an environment of hostility, designed to intimidate the plaintiff’s managers and employees, ruin its business, and encourage others to undertake physical acts against the plaintiff’s managers and employees." As a result, employees have allegedly suffered “mental anguish and fear from the receipt of death and arson threats.”

The complaint characterizes the defendants' conduct as "so extreme and outrageous as to exceed all possible bounds of decency and must be regarded as atrocious and utterly intolerable in a civilized society."

Charleston Animal Society CEO Joe Elmore said he has been tied up rolling out Helping Hands for Rural Paws — a campaign to bring veterinary care to rural communities that was announced Wednesday — and had not had a chance to look over the complaint.

"We are prepared to stand by everything we have said," he said. "Our focus has always been on improving the conditions so they're not the harshest in the country."

Charleston Carriage Horse Advocates founder Ellen Harley is also named as a defendant. The complaint alleges she frequently follows the carriages, "attempting to provoke the plaintiff's horses and cause disruption and intimidation to the plaintiff's business."

Harley called the lawsuit "yet another baseless attempt to shift the focus away from the real issue, which is the humane treatment of these animals."

"At no time will these tactics distract us from our continued advocacy for these animals and the community in Charleston we represent that cares for them," she said.

The complaint doesn't give specific examples of the alleged violations. Several horses and mules that fell in the streets made it into social media last year, but there was only one publicized incident involving Charleston Carriage Works.

Around 3:45 p.m. on April 19, 2017, a Charleston Carriage Works horse named Big John fell near Meeting and Hasell streets in downtown Charleston. The owners said the animal tripped and lay still until the tack was removed, as it was trained to do, and then got back up and was fine.

Charleston Carriage Horse Advocates posted a video clip on their Facebook page showing the horse lying in the street, claiming that the animal had collapsed from exhaustion. It's not clear where the complaint's reference to a claim that the horse had died came from. The video has been viewed 13 million times.

The Charleston Animal Society has the video at the top of their website page calling for "Humane Carriage Tours." The blurb beside the video screenshot says that Big John collapsed. The society has been calling for an independent study to determine how well the animals tolerate pulling passengers in Charleston's heat and humidity.

The complaint points out that the Animal Society is partially funded by taxpayer money. The society contracts with the county, North Charleston, Charleston and Mount Pleasant to help with animal control. For example, Charleston County's current budget includes $1.5 million to the society.

The defendants have 30 days to file a formal response. 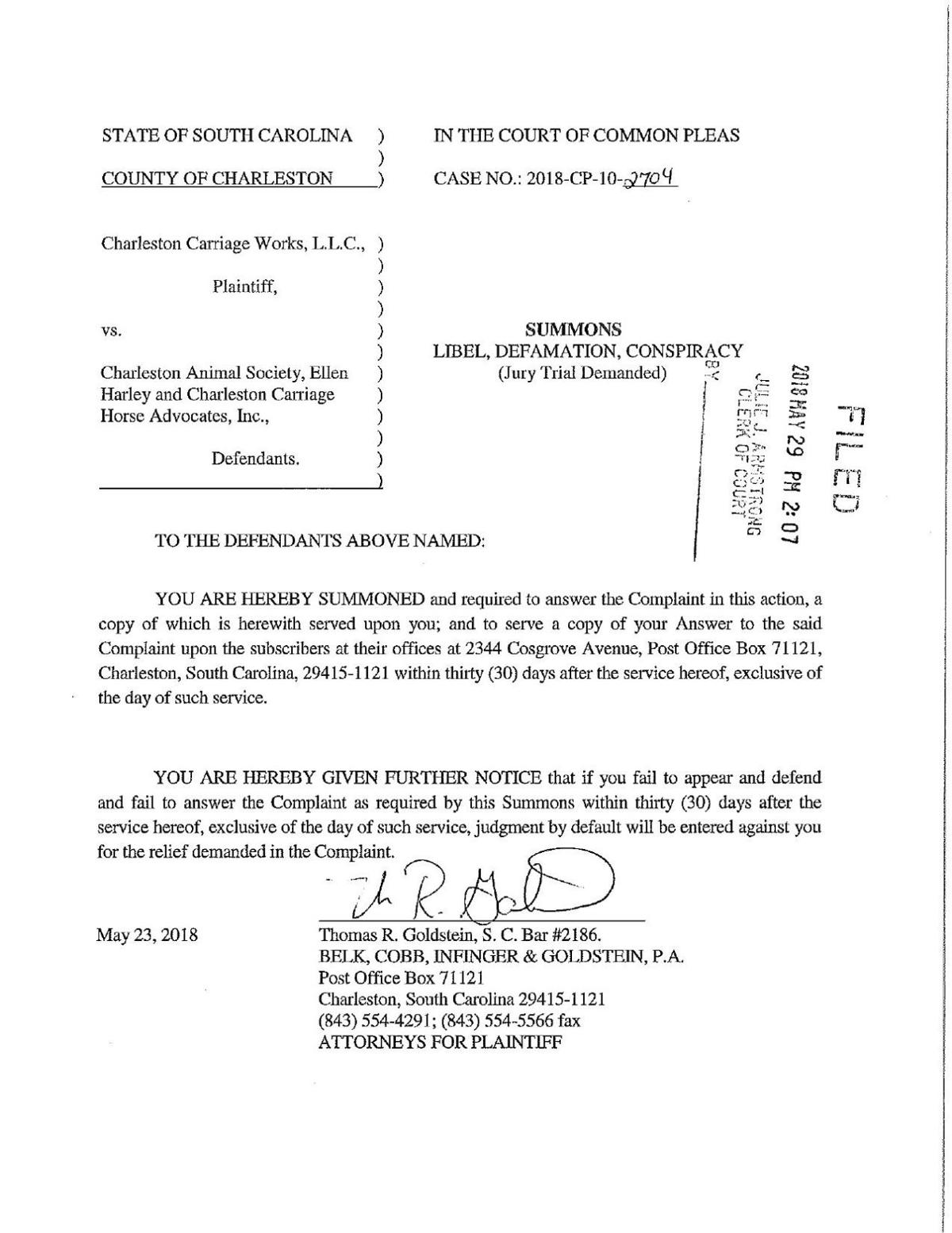