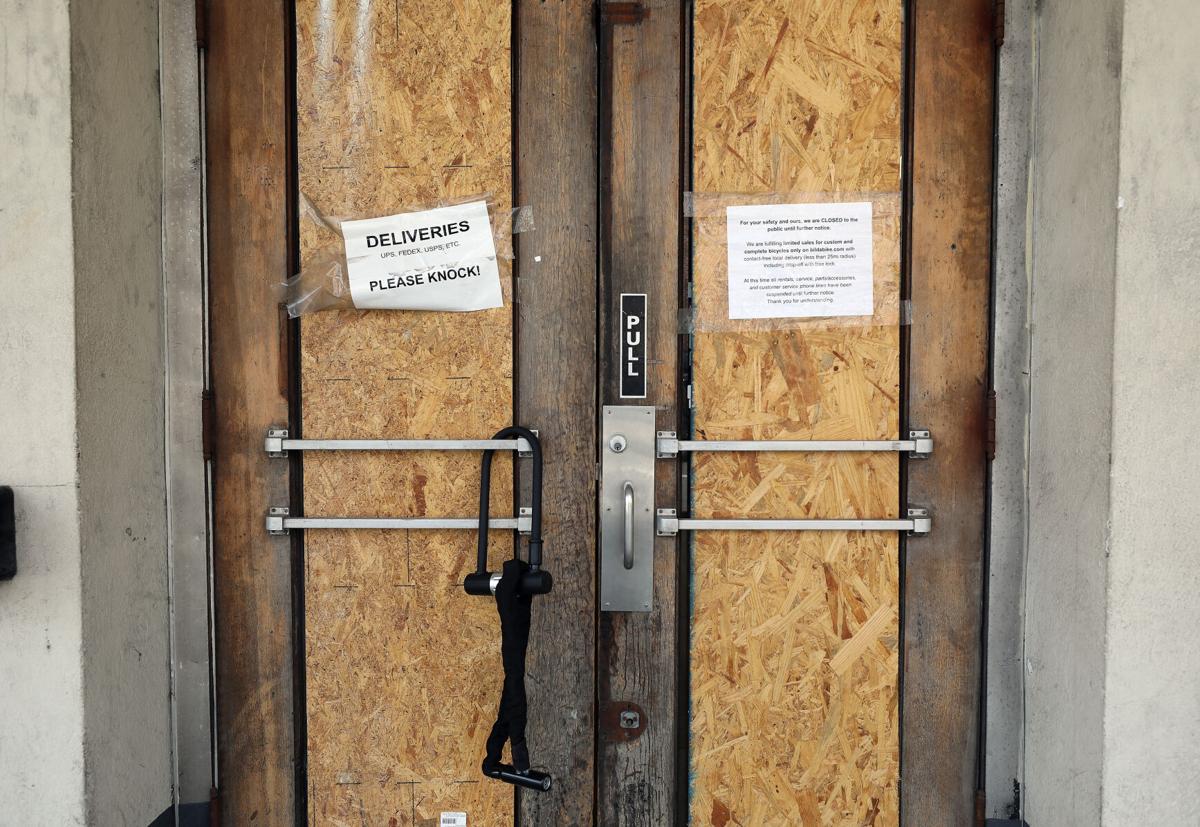 Affordabike is closed until further notice on King Street but will still fulfill custom bicycle orders on its Build a Bike website Wednesday, June 3, 2020, in Charleston. Grace Beahm Alford/Staff 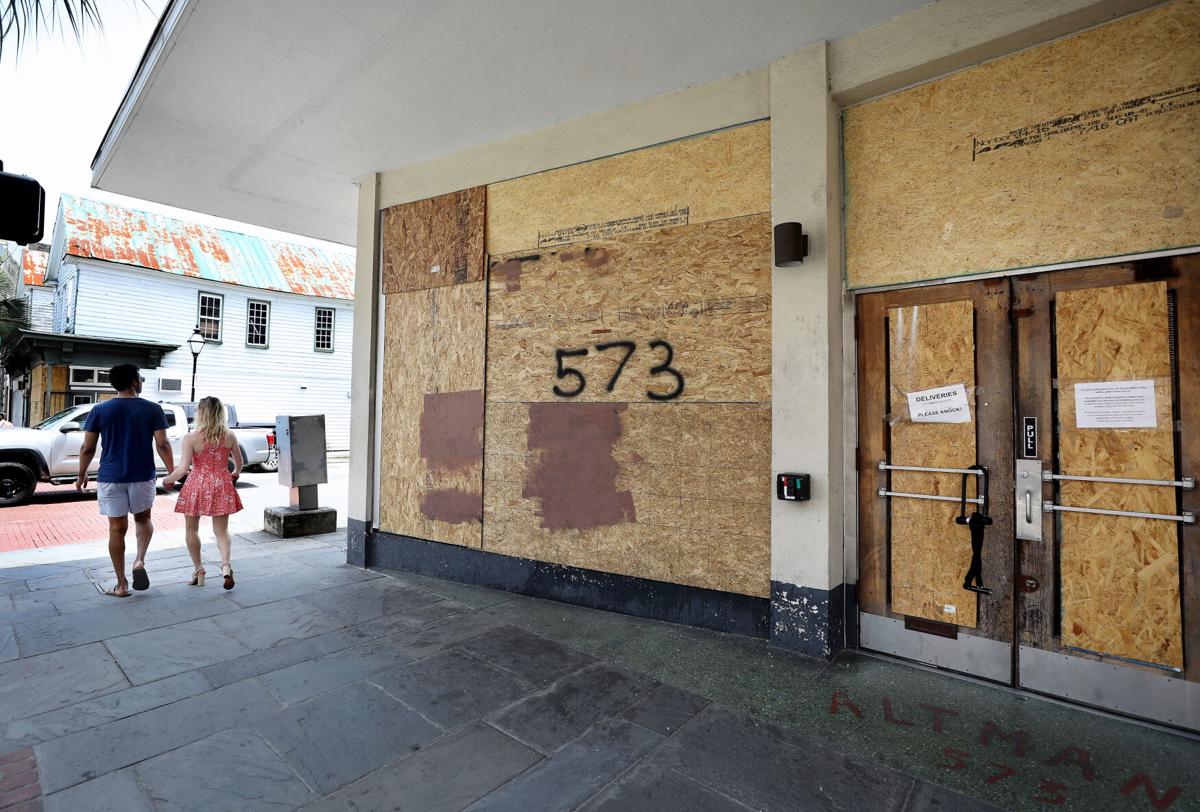 By Sunday morning, a video started to circulate on social media of a man standing in front of his King Street store, pleading with protesters that his business be left alone.

"Please ... I'm begging you!" he shouts, waving his arms. Seconds later, four shots ring out, and the person filming swears, ducks and shuts off the camera.

That's not how Daniel Russell-Einhorn, owner of the Affordabike bicycle shop, expected the night to go when he rode his bike down to King Street. He had received a text from a friend that someone had broken his store windows, so he called 911 on the way. It was just after 10:30 p.m., he said.

After several hours of peaceful protests responding to police brutality and the recent killing of Minneapolis resident George Floyd, things took a turn after dark. Police were deploying tear gas and King Street stores were being broken into.

He rode down with a handful of rolled joints in his pocket, thinking — "naively," he now says — that they would be his bargaining chips. But, as soon as he arrived, he realized he was grossly ill-prepared.

The owner of the convenience store on the corner shouted at him to go to his building across the street, which he uses as a warehouse for bikes and parts. It was on fire, the man said.

Russell-Einhorn doesn't remember seeing flames but said water was pooled outside a storefront two doors down, like a fire had just been put out. When he came by a few days later, it still smelled like a campfire.

His first thought was to check on his stock of vintage bikes. He had just acquired a collection of about 250 classic 1970s-era road bikes that he planned to restore.

The bikes were kept on the ground level of his warehouse which is just steps away from his retail store on King Street, all easily accessible if the storefront was breached. Windows were broken, but it looked like nothing had been stolen at that point.

So he started to stand guard, most of the time hiding behind a banner that hangs in one of the front windows. When it sounded like people were coming inside, he'd run out, swinging a bike seat post and yelling.

Shortly before midnight, when the crowd had gotten to his retail store and rocks were being lobbed at the windows, Russell-Einhorn ran out of the warehouse, still hoping he could negotiate.

The videos of him shouting outside of his store happened moments after that. Once shots rang out, he ran back to the warehouse.

"This (expletive) is very real right now, and people are very upset," Russell-Einhorn said in a video he recorded minutes later, still out of breath.

A couple of his coworkers came in for backup at that point, and they spent about an hour boarding up the building.

"If the goal was to show what it’s like to be completely out of control and at the mercy of someone else I felt that, for real," Russell-Einhorn said this week.

Like many other business owners on King Street, Russell-Einhorn called police several times but didn't see officers respond to the scene. He was at his store until about 1 a.m., he said, based on his text messages, but said he only saw two police vehicles, which drove past his store without stopping.

Police Chief Luther Reynolds defended their approach earlier this week. He told The Post and Courier police were focusing on life-saving issues and fielding "hundreds" of calls.

The next day, Russell-Einhorn said that while he was seriously shaken by the night's events, he was thinking about the pain that played out on the street.

"When you are in pain and when you are suffering, sometimes you act out in ways that are not so eloquent," Russell-Einhorn said. "I think the message is clear. There's a lot of pain there."

So when he saw the videos that were being viewed thousands of times that day on Facebook filmed by Orlando King, a North Charleston man who was part of the rioting, he sent King a message and asked to talk.

In Facebook Live video on Tuesday, King referenced that conversation, saying that people were reaching out to him with questions and wanting to talk about racism in Charleston.

"Charleston’s gonna be heard. I’m not the only one," he said near the end of the livestream. "That’s just how I feel...So if it had to happen with a riot, so be it. I know they’re paying attention to us right now."

Seconds later, a voice comes over a loudspeaker announcing he's under arrest. The phone is placed or dropped on the ground, and King comes out of view.

An officer appears in the frame during the last seconds of the video. A hand comes over the lens, and the video stops.

Russell-Einhorn was watching the livestream and said he was shocked at what he saw. He and King had made plans to meet that afternoon to talk.

According to documents provided by the Charleston Police Department, King was cited for two burglaries: a break-in at the College Market and at the King Street restaurant El Jefe.

The only specific item King is cited for stealing from the convenience store is a six-pack of Angry Orchard hard cider. King had recorded taking the beverages from the store on his Facebook Live video.

At El Jefe, records state that King identified himself in a surveillance photo in a post-Miranda interview. He said he entered the business to try to steal alcohol but "there was none left."

King is facing two charges of violent burglary, and his bail was set at $350,000.

Russell-Einhorn said he's not really angry at the people who looted and damaged property. He is, however, furious that he didn't see police respond to 911 calls Saturday night, something he described as "the ultimate betrayal from the city." He said he's considered relocating the store outside of Charleston

"I'm being told, 'We thought this could never happen here,'" he said. "How could they not know it could happen here?"

This week, Russell-Einhorn moved some bikes to a more secure location and, like other store owners on King Street, boarded up his windows at both the retail store and warehouse. But unlike many other business owners, he's not trying to get back to business as usual anytime soon.

He plans to do online sales and keep the Affordabike retail store closed until the end of the year.