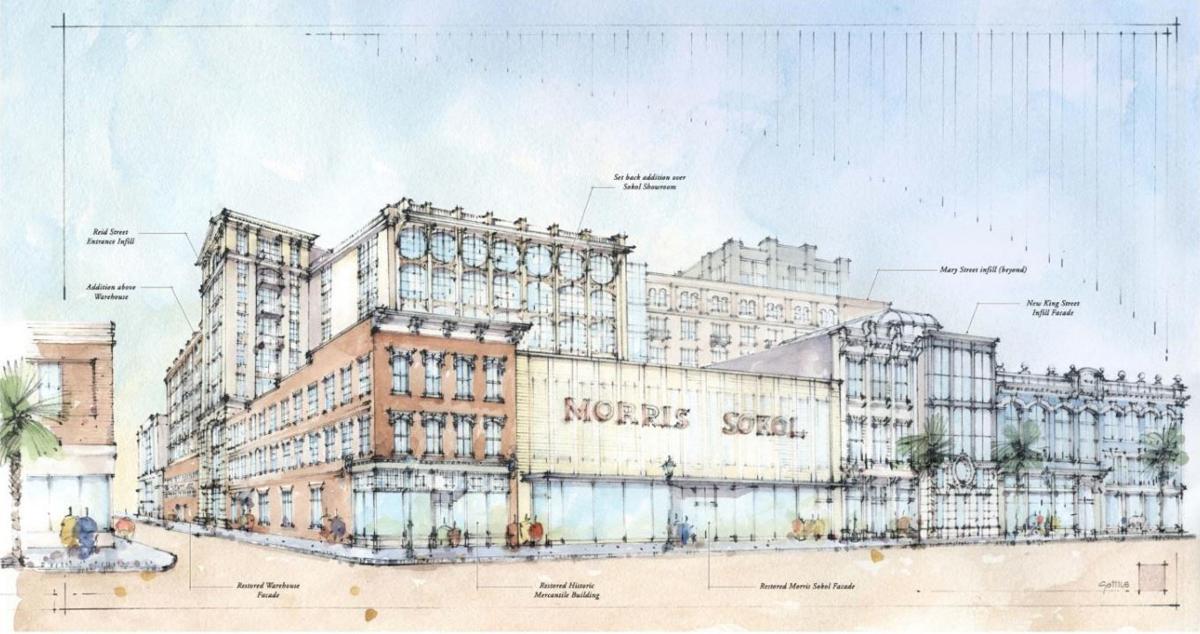 Plans for the redevelopment of the former Morris Sokol site received conceptual approval from Charleston's Board of Architectural Review on Wednesday, Feb. 26. Rendering/Sottile & Sottile 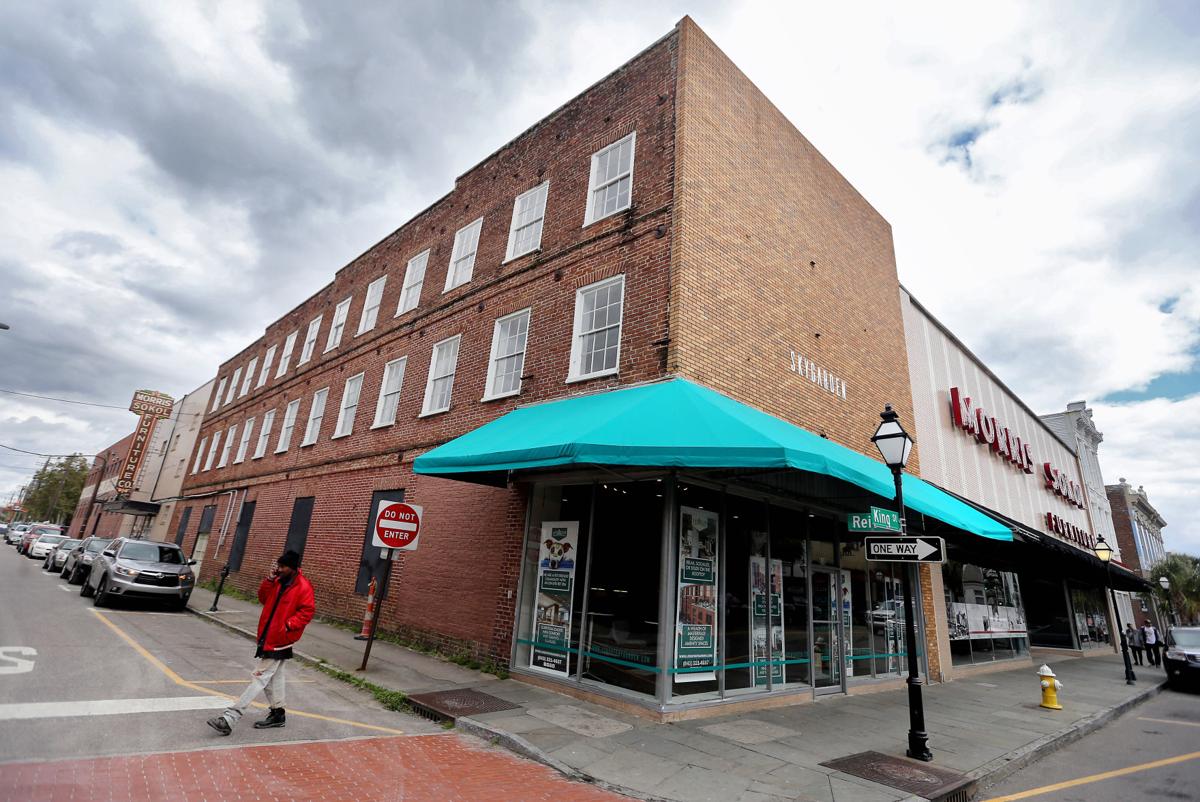 As part of the master plan for a 200-room full-service hotel at the former Morris Sokol site, the brick on the building at the corner of King and Reid streets will be revealed to restore the structure's original facade. File/Grace Beahm/Staff 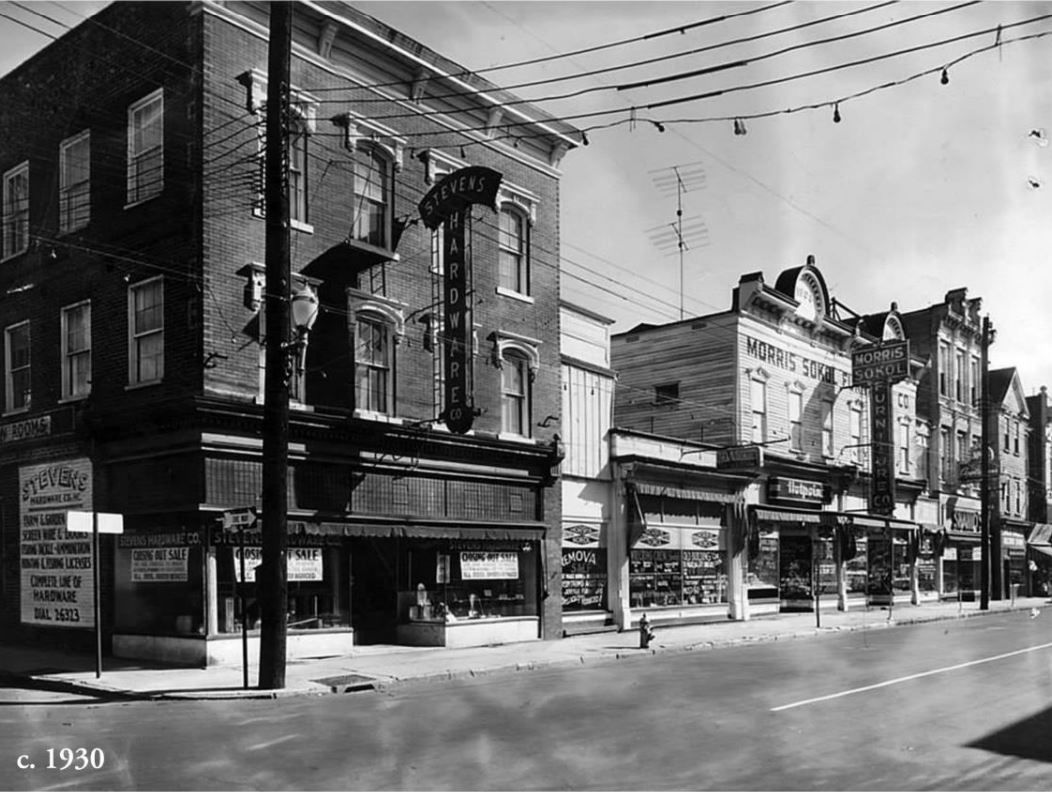 This photo from about 1930 shows the original facade on the building at the corner of King and Reid streets. Provided

First, the city granted permission to build the 200-room full-service hotel slated for the site. This week, the project got a critical first approval from the Board of Architectural Review.

In addition to the former furniture store, the block-long site includes two warehouses, a corner retail building and a historic structure that houses a Starbucks cafe on the ground floor.

The acquisition of the Morris Sokol store was the first piece of that puzzle. Vanderking 510 LLC purchased it in 2016 for $22.5 million.

The next year, a public design charette was held in the former showroom to get community input on what to do with the property.

In the years since, the owners have been refining the plans that the BAR approved this week. The board also OK'd some demolition work.

The project has won the support of the Preservation Society of Charleston and Historic Charleston Foundation. Both spoke on behalf of the project last month when the developers sought permission to build 200 hotel rooms.

The groups said they felt the development meets the city's requirement of maintaining or contributing to a "mixed-used district." Plans include street-level retail, dining, meeting venues and office space.

Mike Shuler, an owner in the partnership pursuing the redevelopment project, said the group is planning to add a new alley area that would be publicly accessible from King Street. It will run between an existing historic structure at 502 King that will be restored and a new building that will fill a neighboring vacant space.

The front of the 1957 showroom will stay the same, apart from some updates that will allow natural light to stream into the upper floor.

"We’re preserving a facade that a lot of people thought we were going to take down," Shuler said.

Parts of the showroom that don't face King Street will come down to make way for new construction.

On the north side of the showroom, brickwork that covers the structure at Reid and King streets will be removed in order to recreate the original facade.

Plans submitted to the BAR included a photo from around 1930 showing what the corner building, which was originally built around 1890, looked like before it was stripped of its original detailing in the 1950s.

Shuler said his group has been able to identify existing buildings on the street that have some of the same architectural details as that structure's original facade. Those will serve as templates for elements like the window hoods and wood cornice.

Just behind that corner building is a former warehouse built around 1940. Its exterior walls, which include some faded furniture store signage, will be preserved.

Like the showroom, the interior will be razed to allow for construction of an addition.

The only structure that will be fully demolished is a small warehouse built in the 1970s.

New construction at the site will include three infill buildings and additions that will be built over the 1940 warehouse and the showroom. Those additions will be set back, so the parts of the development that reach the maximum height of nine floors are farther from the street.

Since the development incorporates separate, existing buildings and new construction, the plans look more like a collection of connected structures rather than one large building.

All of the hotel rooms will be in the newly constructed parts of the development. Plans show a covered valet plaza with access from Mary Street and a building behind it housing the hotel lobby.

Shuler described high hopes for the hotel. He compared it to the opening of the Omni that revived retail activity farther south on the peninsula in the 1980s. The Morris Sokol lodging is intended to be an "anchor" for that section of upper King, Shuler said.

The designs will still need two more rounds of "yes" votes from the BAR until they're finalized, so Shuler said he can't say yet when construction work will start.

"I can say we're pursuing this in earnest," he said. "I'm very excited to deliver this project."

Test your knowledge of Charleston development, food and dining with this week's news quiz