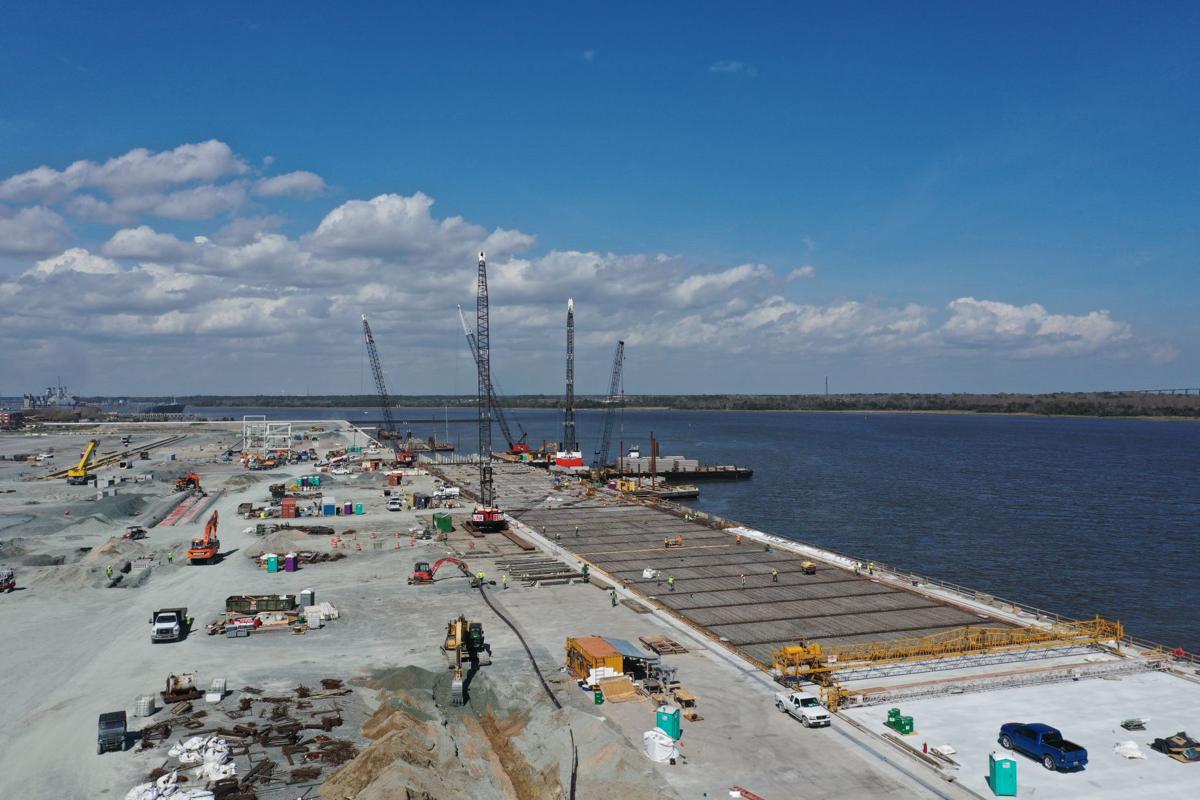 Work continues on the Leatherman Terminal in North Charleston, which is scheduled to open in March 2021. State Ports Authority/Walter Lagarenne/Provided 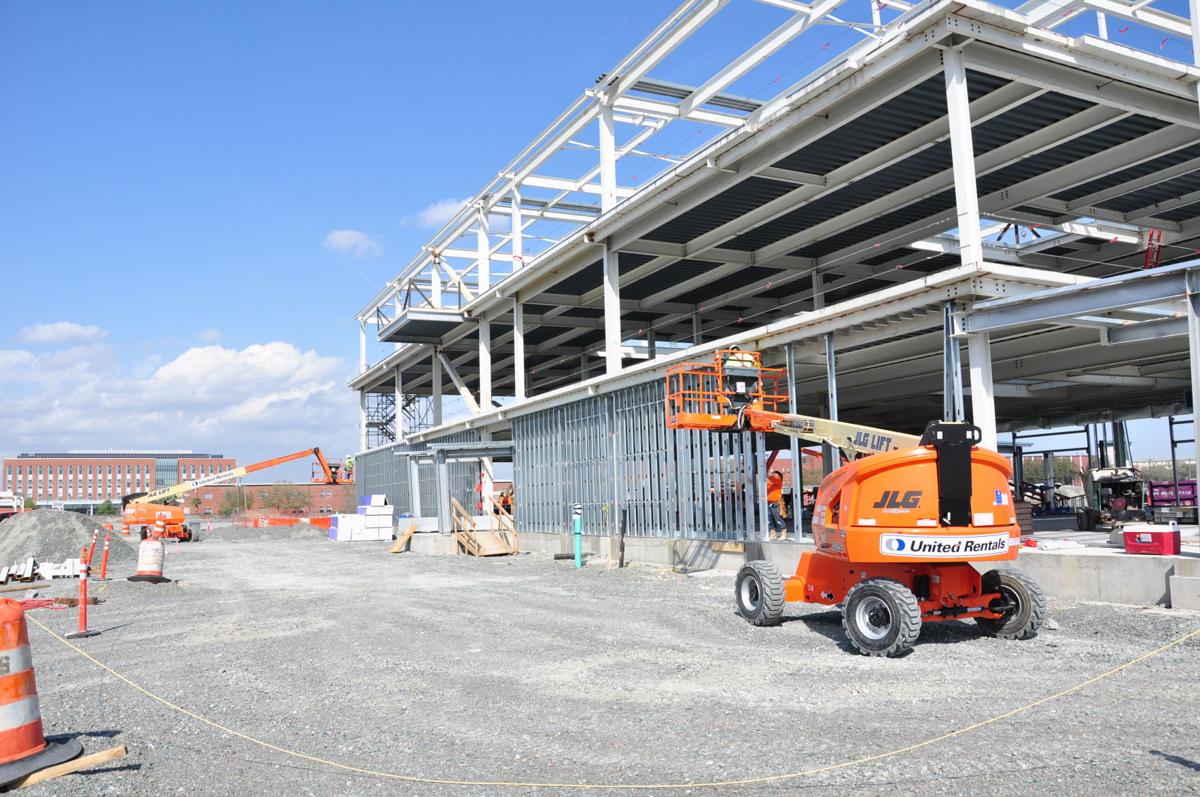 The last piece of steel was recently placed at the main operations building at the Leatherman Terminal in North Charleston, which is scheduled to open in March 2021. State Ports Authority/Walter Lagarenne/Provided 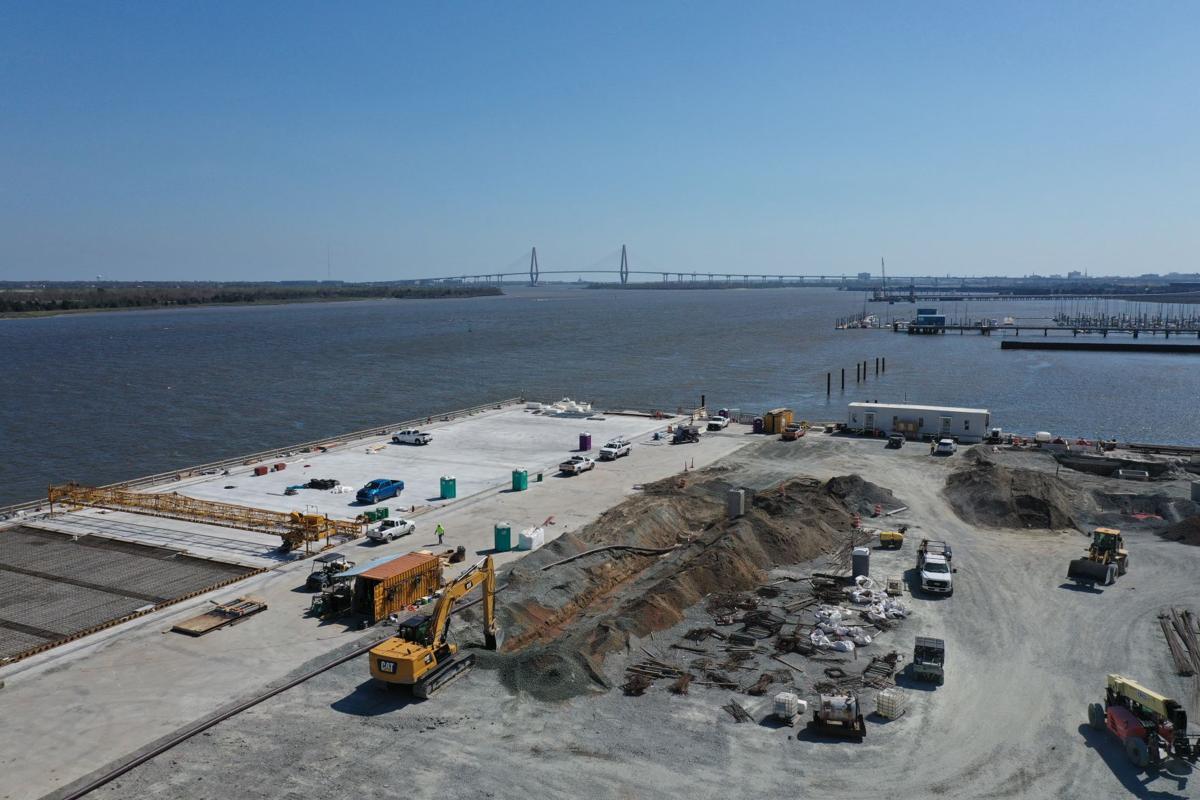 A view of the Leatherman Terminal with the Arthur Ravenel Jr. Bridge in the background. The nearly $1 billion first phase of the terminal in North Charleston is scheduled to open in March 2021. State Ports Authority/Walter Lagarenne/Provided

With just a year to go to complete the first phase of a nearly $1 billion terminal to handle big container ships calling on the Port of Charleston, the construction activity reminds Jim Newsome of a once-popular children's toy.

"It's really like an ant farm out there when you see all the work that's being done and all the coordination," said Newsome, president and CEO of the State Ports Authority. "We've got literally hundreds of projects going on today, and they all work well together."

The Leatherman Terminal under construction at the former Navy base along the Cooper River will be the first new container terminal in the U.S. since Jacksonville's TraPac Terminal in 2009. More than a decade in the making, the expansion is designed to accommodate ships carrying as many as 19,000 cargo boxes measured in 20-foot increments.

The 134-acre first phase will include one 1,400-foot berth, with two more to be added in coming years as demand warrants. It will help take some of the load off the authority's Wando Welch Terminal in Mount Pleasant, which handled 80 percent of all cargo boxes moving through the port's terminals in 2019.

And, like an ant farm, there are separate construction groups working to complete numerous segments of the project at the same time.

"Our contractors are working exceptionally well together," said Lucy Terza, the authority's engineering project manager. "Many of them are local, so it's pretty powerful to tap into the local construction market for this project."

The wharf contract is farthest along — about 80 percent complete — and will be ready to handle five ship-to-shore cranes now being fabricated in Shanghai. The cranes, with 169-foot lift height, are about 75 percent complete and are scheduled to arrive this summer.

The terminal also will have 25 rubber-tired gantry cranes that will be the largest in the authority's fleet, able to stack six containers high and seven containers wide. They are set to arrive late this year.

Terza said contractors recently hit a construction milestone by completing the installation of all 581 pre-stress concrete pilings that will support the wharf, and concrete for more than one-third of the first berth has been poured.

The site development contract is the largest, including all of the utilities required to support and operate the terminal — including 5½ miles of storm drains and 125 miles of conduit — as well as many of the buildings, refrigerated container stacks and high-mast light poles. The authority placed the last piece of steel for the main operations building in January and concrete has since been poured for the second and third floors.

Work also continues on the $330 million Port Access Road that will link Interstate 26 with the terminal. The S.C. Department of Transportation is responsible for bringing the road from the interstate to the port's property, and plans to complete that work by Feb. 15. The SPA will then extend the road, designed to keep truck traffic off local streets, into the shipping terminal property.

A temporary access road was recently completed so the public can access a nearby marina while construction takes place, and the authority is designing a temporary chassis yard that will open in March.

The terminal is named for state Sen. Hugh Leatherman, the Republican chairman of the Senate Finance Committee that has helped the authority get money to deepen Charleston Harbor and build the I-26 access road.

"South Carolina ports has seen tremendous growth over the past decade as bigger cargo ships continually call on the Port of Charleston," Leatherman said during a visit to the terminal construction site in January. "The port has long been the economic engine of South Carolina, and with the new terminal, this will only increase. The container terminal will expand operations and support high-paying jobs for our citizens."

At full buildout, the terminal will have three berths and the annual capacity for 2.4 million 20-foot containers. That’s the same size as the workhorse Wando Welch Terminal in Mount Pleasant and it gives the port enough room to handle expected growth over the next two decades.