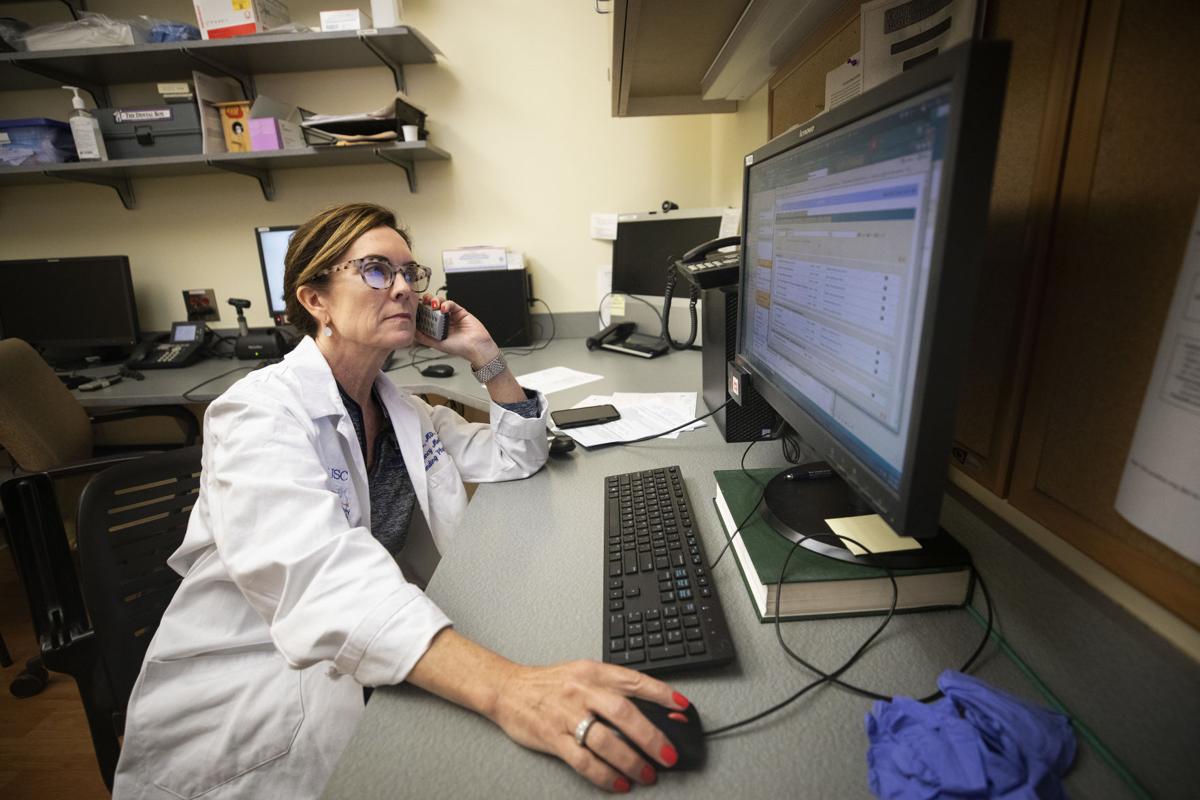 Dr. Christine Carr of MUSC and the Carolina eHealth Alliance estimates she spends about 90 percent of her time at work on the computer looking at patients' medical histories. Lauren Petracca/Staff 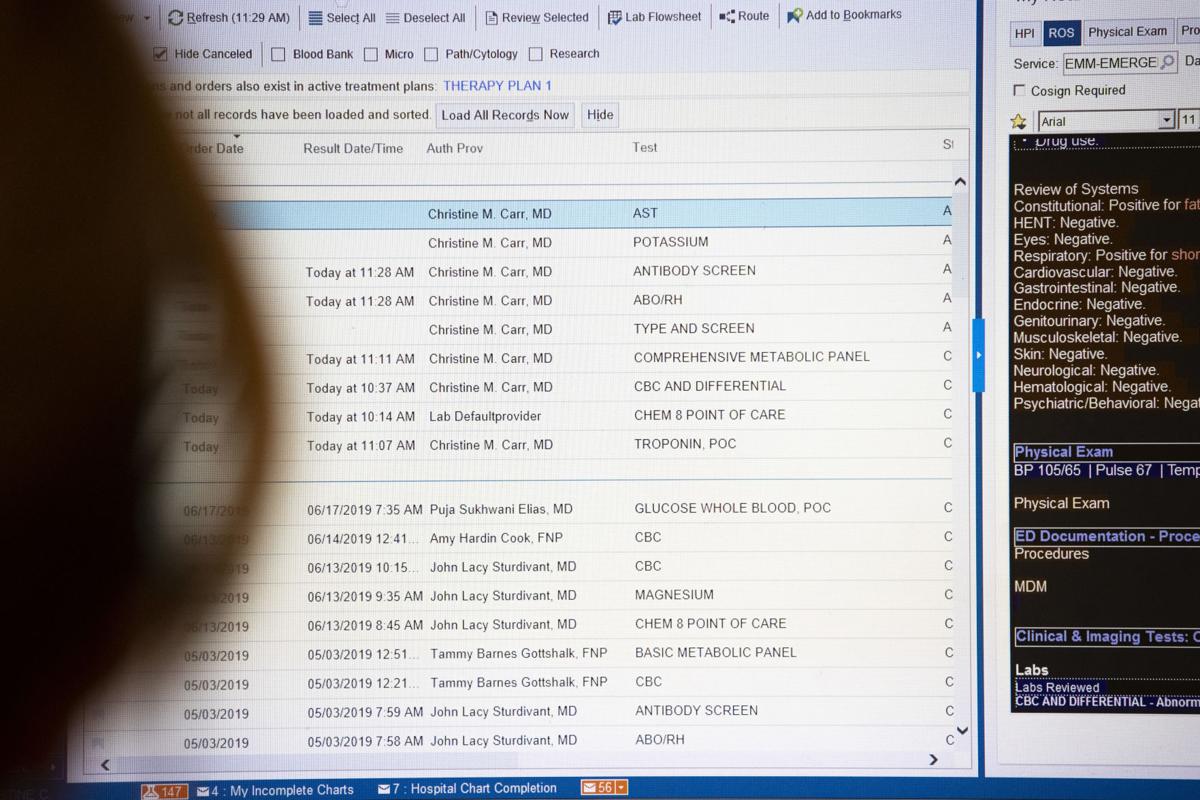 Dr. Christine Carr pulls up the medical records of a patient in the emergency department at MUSC. Lauren Petracca/Staff 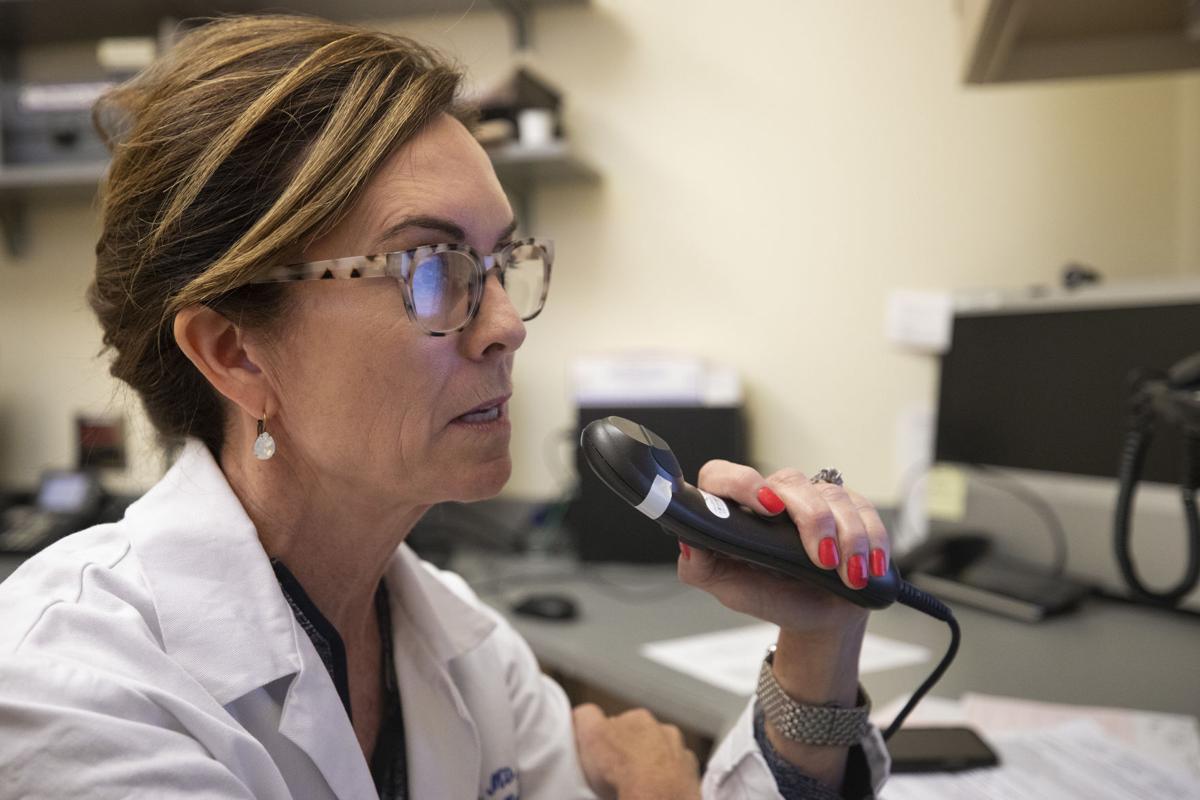 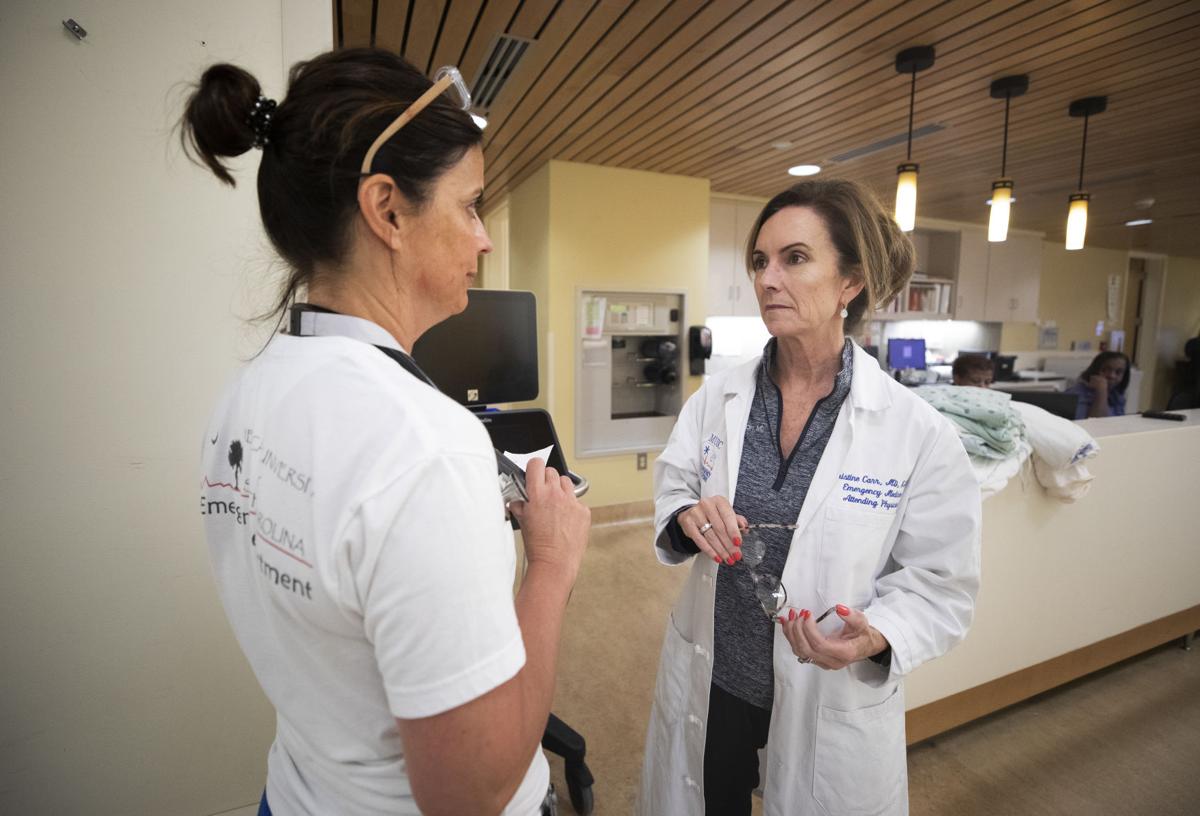 Dr. Christine Carr (right) speaks with Noula Cumins, a nurse in the emergency department, about a patient at MUSC. Lauren Petracca/Staff 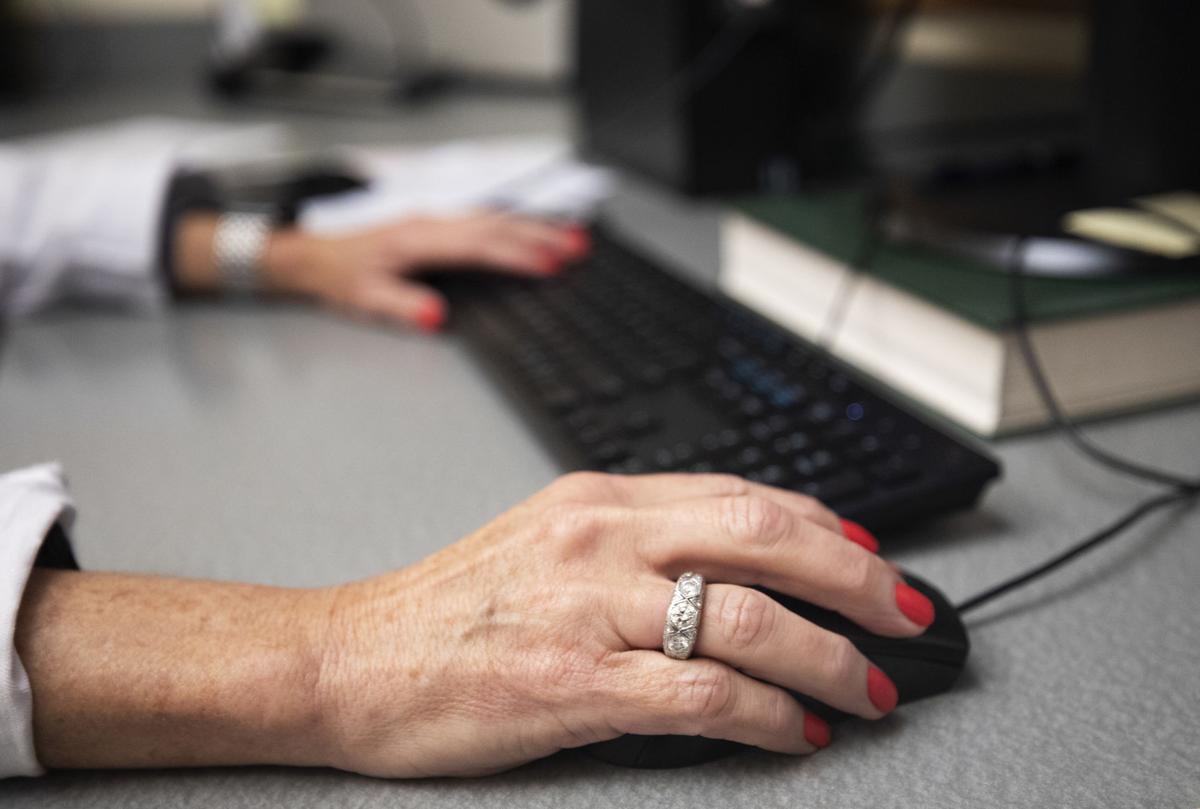 Dr. Christine Carr of MUSC and the Carolina eHealth Alliance estimates she spends about 90 percent of her time at work on the computer looking at patients' medical histories. Lauren Petracca/Staff

Dr. Christine Carr pulls up the medical records of a patient in the emergency department at MUSC. Lauren Petracca/Staff

Dr. Christine Carr (right) speaks with Noula Cumins, a nurse in the emergency department, about a patient at MUSC. Lauren Petracca/Staff

A health data exchange, invisible to patients but at work for a decade, was modernized this summer and is collecting more information than ever.

A dozen emergency departments in the area connect through the system, called the Carolina eHealth Alliance. Patients must give permission for their information to be shared.

Sharing information this way helps caregivers make the right call when a patient comes through the emergency room. For years, the exchange only connected emergency rooms at Trident Health, Roper St. Francis, the Medical University of South Carolina and East Cooper Medical Center.

But early this summer, the Carolina eHealth Alliance hired a company to manage patient data and opened up access to more than just emergency department staff.

The core idea has always been to cut down on the costs of health care by reducing repeat tests and avoiding admitting patients for a hospital stay whenever possible. Ideally, doctors anywhere would be able to see an entire health history before they order tests, prescribe a drug, or send the patient into the hospital.

But the patchwork of electronic health record systems, along with reluctance to share data with competitors, has slowed that effort.

"It may not stop the patient from showing up at the ER," said Dr. Christine Carr, a physician at MUSC and the medical director of the Carolina eHealth Alliance. "But it will make the ER visit a lot faster and cheaper."

Spending on the overuse of medicine annually is $200 billion or higher, according to the nonprofit Lown Institute. That includes needless tests and unwarranted hospital stays.

The federal government ordered the health industry to move to electronic health records about a decade ago. The mandate included a financial penalty if providers lagged behind and a rewards system for those that adopted digital records.

Paper medical records are inefficient, and policymakers hoped electronic data sharing would improve how patients are treated. But physicians tend to struggle with the time-consuming task of managing digital documents.

Physicians tend to think the systems make them less effective at their jobs, a Stanford Medicine survey last year found. A majority of doctors said dealing with health records leads to professional burnout.

One of their frustrations is how difficult it can be to share information. Hospitals often use multiple software vendors, and the companies tend not to exchange data easily.

After-hours in emergency departments, staffers still have to fax a signed form to the hospital they are trying to get information from, said Joy Huntington, director of emergency services for Roper St. Francis. If someone is available at the other hospital's records department, they would then fax the records back.

"By that time, you’ve either decided to repeat the test yourself, or you may have admitted the patient," Huntington said.

If no one at the other hospital is available to help, it might not be possible to get the records at all until the next day.

The information exchange was founded about 10 years ago as a way for emergency departments to share information. It was custom-built, said Dr. Leslie Lenert, the technical lead for the Carolina eHealth Alliance.

In its first year, the eHealth Alliance saved more than $1 million.

But the software was made on computers that don't exist anymore, Lenert said. The team was hunting down replacement parts on eBay, he said, because they weren't being manufactured anymore.

Maintenance was becoming a burden, said Carr, the alliance's medical director. It was becoming old enough that if the exchange went down, finding a fix would be difficult, she said.

Switching to a cloud-based option, where information is stored in data centers, puts the task of operating the exchange on a private company. Data centers also raise the ceiling on how much patient data can be stored and shared.

Carolina eHealth Alliance saves more than $1 million over one year

"We have to find ways to get around this kind of information blocking and allow records to follow patients seamlessly," Lenert said.

Ken Deans, CEO of Health Sciences South Carolina, said switching to the new vendor, Health Catalyst, is expected to make patient data more secure. The company can protect information better because of its size, compared with the nonprofit trying to manage the information by itself.

"They have a strong commitment to privacy and security that goes well beyond national standards," Deans said.

The Carolina eHealth Alliance isn't the only exchange of its kind in the Palmetto State. Each connect different networks of hospitals. Carr said, ideally, all of those networks would come together under one system.

Or even better, Lenert said, patients would be able to access and read their own health records for themselves.