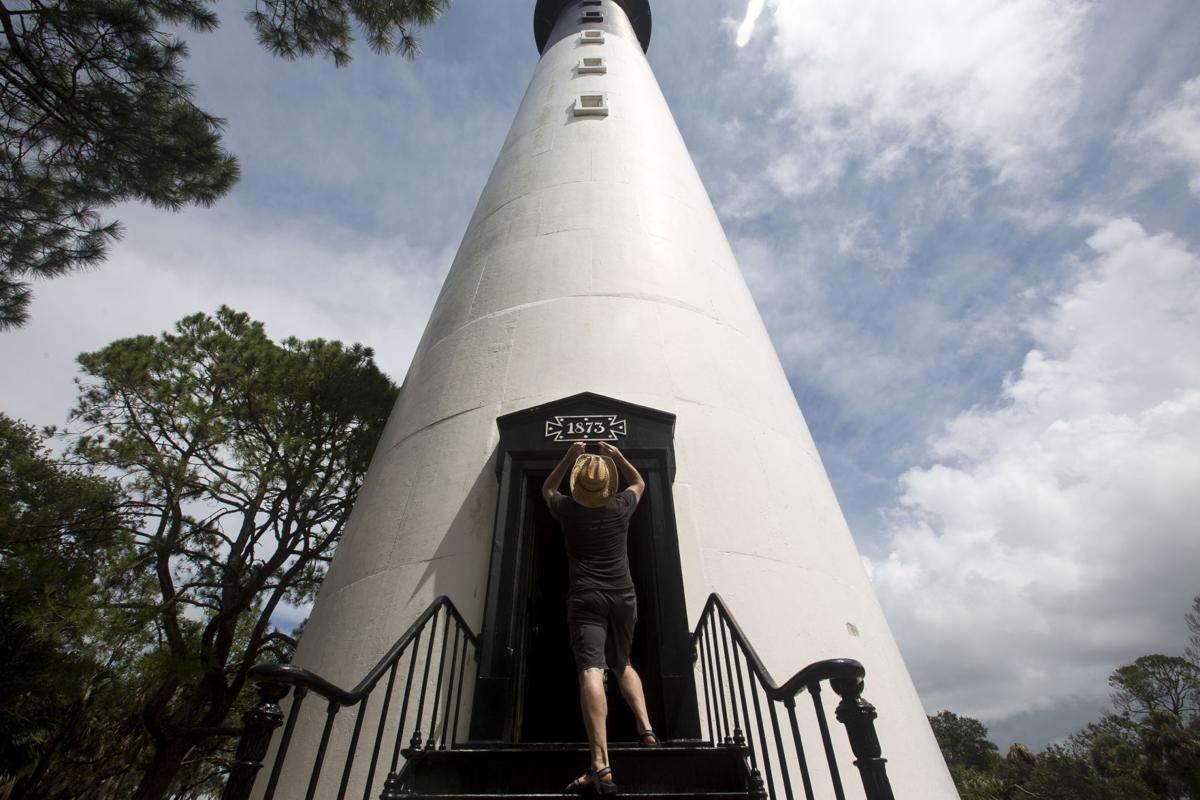 The lighthouse at Hunting Island State Park. The success of South Carolina's 47 state parks was one of the silver linings of 2020's devastating year for tourism highlighted at the 2021 S.C. Governor's Conference on Tourism and Travel. File/Andrew J. Whitaker/Staff 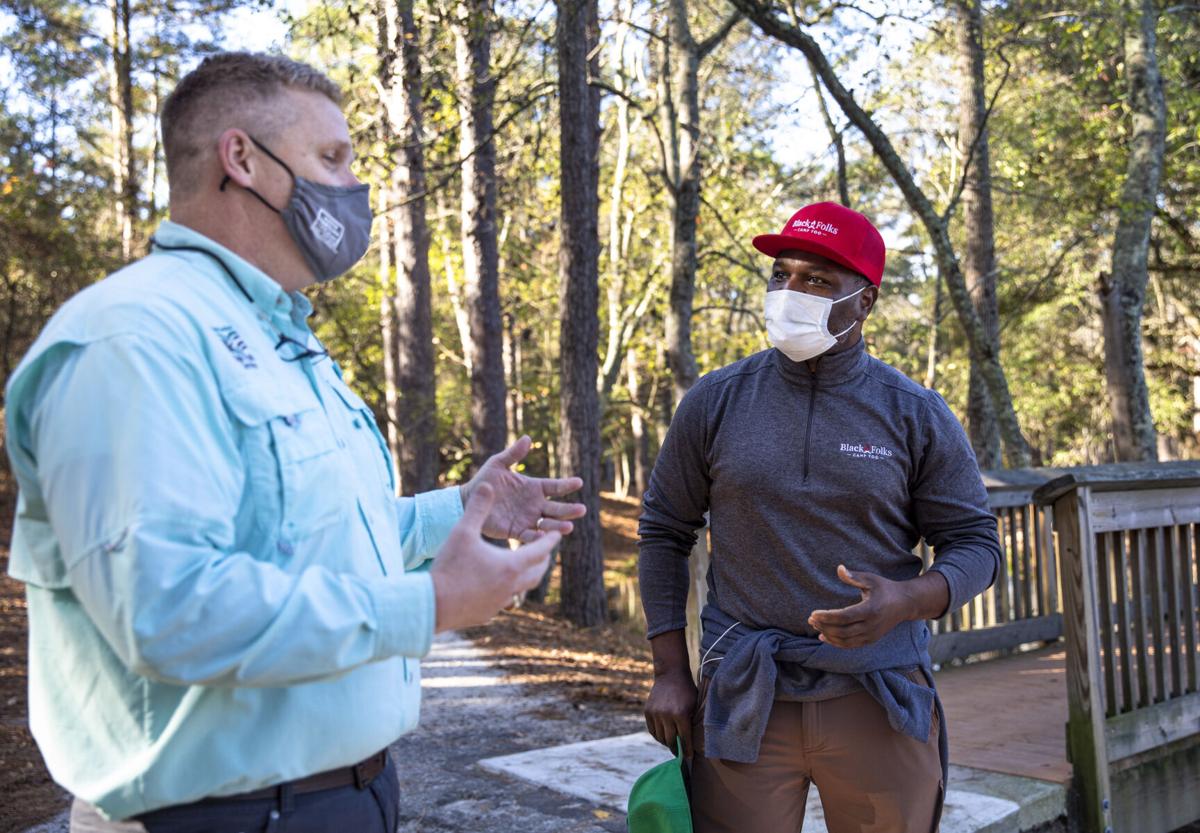 South Carolina state parks Director Paul McCormack (left) talks with Earl Hunter,  founder of Black Folks Camp Too at Sesquicentennial State Park on Friday, Nov. 20, 2020, in Columbia. State parks were one of the few segments of the state's tourism sector that saw growth in 2020. Tourism director Duane Parrish highlighted the park system's success and their new partnership with Black Folks Camp Too at the 2021 Governor's Conference on Tourism and Travel. File/Andrew J. Whitaker/Staff

COLUMBIA — When South Carolina's tourism leaders gather every February, the event tends to be a recap of the past year's successes — how much more, in billions, travel was worth compared the year before and what parts of the sector were growing fastest.

At the 2021 Governor's Conference on Tourism & Travel, which started Monday at the Columbia Metropolitan Convention Center, the S.C. Department of Parks, Recreation and Tourism stuck to focusing on the positives.

But, instead of overarching trends, the agency highlighted small silver linings in what was an otherwise devastating year for travel, such as a growing "drive market," and higher demand for outdoor activities.

The state's tourism industry lost about $5.7 billion in visitor spending last year. In April alone, during the peak of COVID-19 lockdowns, the sector saw a more than $1 billion loss compared to 2019.

Tourism-related jobs were halved, and hotel occupancy dipped below 20 percent, something state tourism director Duane Parrish said he has never seen in his decades working in hospitality.

2020 was devastating for SC tourism, but short-term rentals may have softened the blow

Originally planned for Greenville, the event was moved to Columbia to make it easier for people in all parts of the state to attend without the need to stay the night. The event was also shortened, had a simplified agenda without tours or golf outings and all participants had their temperatures screened and were required to wear masks.

The content of the conference's opener was very different, too.

For the last several years, a highlight of the event was an update on how much tourism in South Carolina had grown, an announcement that was usually made during Parrish's recap of the previous year's successes and plans for the 12 months ahead.

At the 2020 conference, it was shared that tourism had swelled to a $24 billion value in the Palmetto State.

But this time, the conversation Monday was about recovery, marketing changes and the few-and-far-between success stories the sector saw in 2020.

Golf was one of the "unanticipated successes."

While some attractions saw attendance drop by half, many golf courses actually grew their revenues.

With more than 300 golf courses in the state, Parrish argued, South Carolina can continue to play to that advantage in 2021, especially with the return of the RBC Heritage Tournament on Hilton Head Island — Parrish was recently named chair of this year's event — and the 2021 PGA Championship that's scheduled in May at Kiawah Island Golf Resort.

A portion of PRT's "recovery advertising funds," which have been bolstered by both state and federal allocations, have been dedicated specifically to promoting golf, Parrish said.

The popularity of outdoor activities also helped S.C. State Parks to be among the industry's 2020 outliers.

Despite being closed for all of April, the state's 47 parks generated $42 million in earned revenue last year, a 13.5 percent increase over 2019.

And parks are looking to diversify their market by working with Black Folks Camp Too, a business started by a Columbia native with the goal of making campgrounds look more like their surrounding communities.

At state parks, diversity efforts haven't worked. This SC native is trying to change that.

Parrish also announced that, following the success of a virtual reality experience designed to simulate the hike to the top of Table Rock Mountain in the Upstate, the park system is developing a virtual reality tour for the lighthouse at Hunting Island State Park and a kayaking experience on the Catawba River.

To help promote itself to visitors in 2021, South Carolina is again going to be working with Lowcountry resident and solo country star Darius Rucker.

At last year's tourism conference, the Charleston native gave a surprise performance, and Parrish announced a partnership with the singer that would help spread South Carolina tourism promotion while Rucker toured. But, since that plan was largely thwarted by COVID-19, the department is extending the deal into 2021.

For the second year in a row, Rucker is featured on the front of South Carolina's vacation guide, this time standing in front of a vintage car parked on Church Street in downtown Charleston. New promotional videos were filmed showing the star driving around popular destinations in the state, and the first feature in the vacation guide is titled "Driving with Darius."

Road trips are still expected to be the preferred way to travel this year as some people remain hesitant about boarding airplanes.

The last year has completely redrawn the map of the state's "drive market," or the places where travelers are likely to drive from to get to South Carolina. In addition to the states included in the drive market pre-COVID, Parrish's agency has added others that were previously thought to be too far away for most travelers to consider driving. Those include states like Texas, Missouri and Michigan.

Advertising has been expanded to reach those new markets, Parrish said, as they compete within the "new consumer environment" shaped by COVID-19.