Six weeks after facing eviction, the West Ashley restaurant that in 2019 opened as Spanglish Cocina + Bar is back on track, according to those associated with it.

“It’s going to be what West Ashley is missing,” said head chef Mike Fitzhugh, who is overseeing the restaurant’s transition under new ownership to a different name and theme. “We’re going to operate it like a big boy restaurant.”

Founding owners Lynda and Tomas Prado surrendered their stake in Spanglish on March 16 to a trio of its original angel investors under a deal brokered with the property owner. Amid accusations that they failed to pay suppliers and employees, the couple had already relocated to Greenville to operate a Cuban sandwich counter at a new food hall.

“We are doing fantastic in Greenville,” Lynda Prado wrote in an email turning down The Post and Courier’s request for a phone interview.

Regarding outstanding debts, Prado said no checks bounced during their tenure as owners.

"If any vendor checks bounced or if any payroll checks bounced during this transition, it was out of our control as everything was done without anyone telling us or giving us a chance to settle or change payment methods," she wrote in a follow-up e-mail.

Additionally, Prado said employees always had the items they needed to do their jobs.

"Spanglish operated consistently and never lacked any supplies or products," she said. "Anything that was needed, we supplied."

Describing the past few months as a "disgusting ordeal," Prado said she has chosen to not address the transfer of ownership or incidents leading up to it so as "to not cause any grief."

Lynda and Tomas Prado first entered the Charleston food-and-beverage scene in 2018, when the Miami natives opened a Spanglish stall at Workshop, adding slow-roasted pork and yucca fries to the food court’s lineup. The following year, they took over the former Bluerose, which closed after a short run under The Montford Group’s control.

“We hope we make our families and friends proud,” Lynda Prado told The Post and Courier, promising “a glimpse into what good food really is.”

Spanglish hit a glitch when it wasn’t able to obtain a liquor license before opening in September 2019, meaning patrons who wanted a drink with dinner had to visit a gas station next door for beer or wine. Otherwise, the restaurant had an outwardly successful start, collecting early raves from fans of ceviche and empanadas. 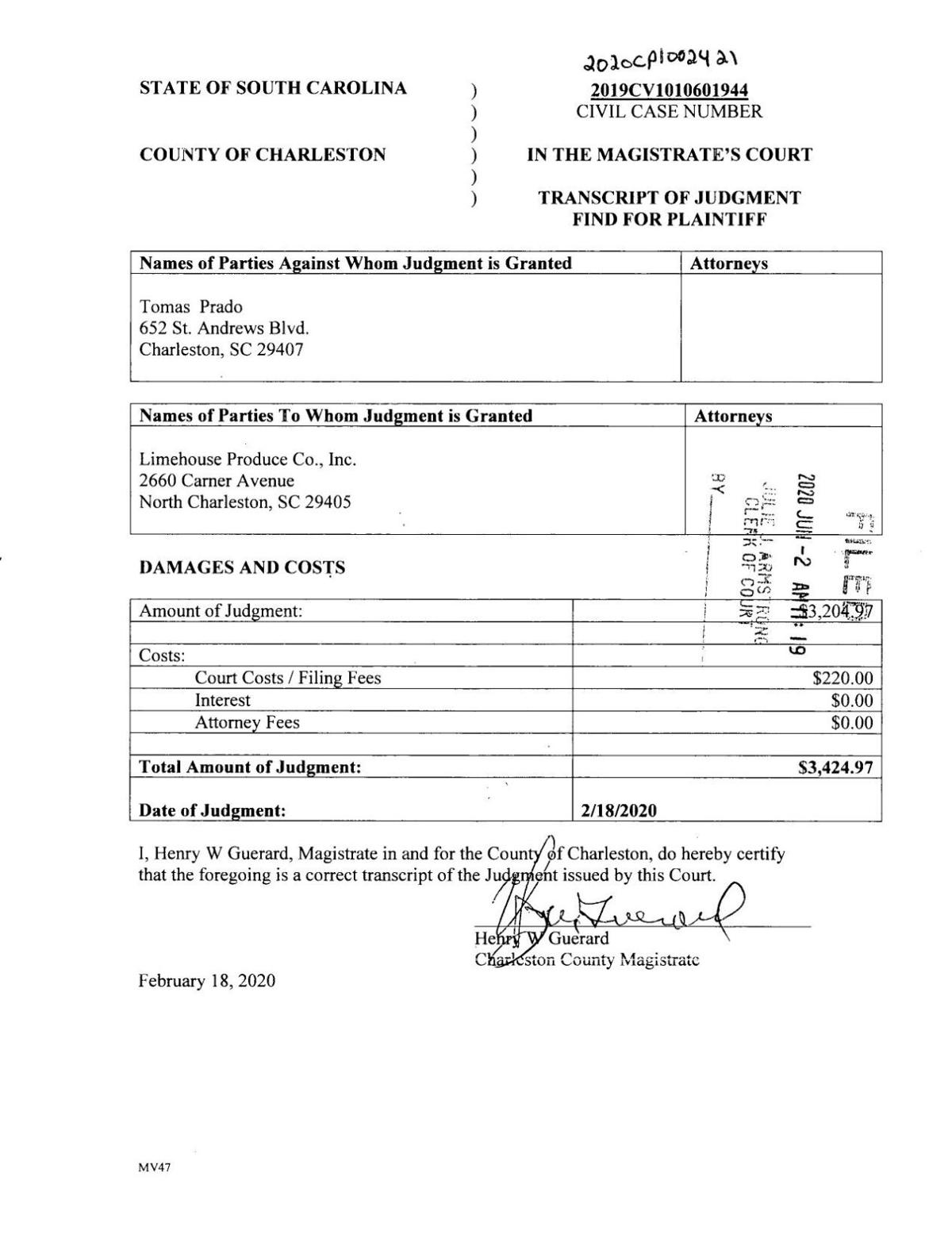 That same month, Spanglish netted nearly $6,000. But the restaurant returned to the red with the onset of COVID-19 in March 2020. The company was approved on May 1, 2020, for $52,162 in Paycheck Protection Program loans to cover payroll expenses.

The Prados itemized $88,088 in debts when they filed their bankruptcy petition, including $6,000 owed to West Elm; $7,306 owed to Crate & Barrel; and $1,445 owed to Macy’s, along with liabilities stemming from credit card use, car purchases and the case lost to Limehouse. 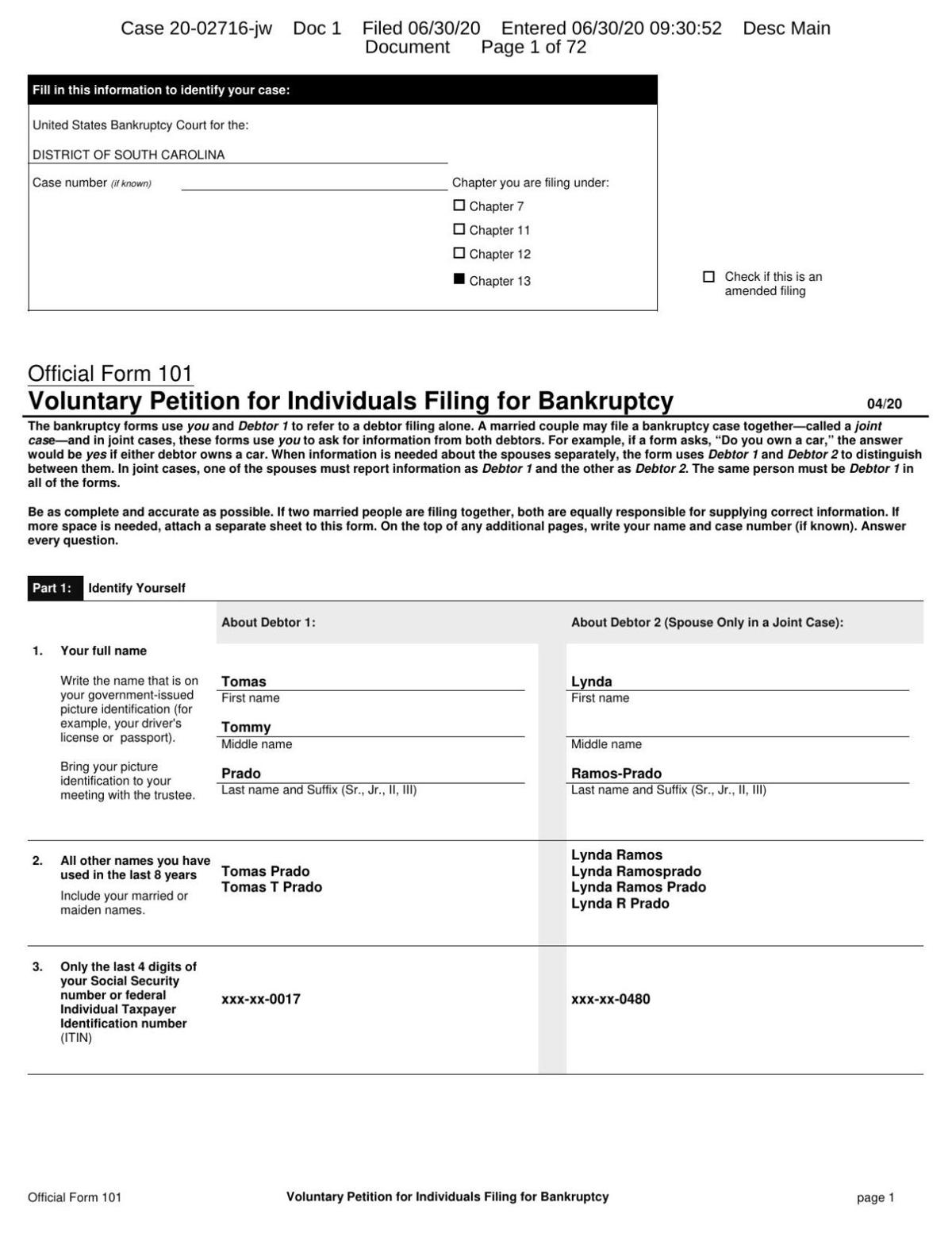 Fitzhugh, who was hired by Tomas Prado in July, hailed his boss as a talented chef with an impressive resume. Still, he said, “It was clear that things weren’t exactly rosy” at Spanglish, citing inventory challenges and employee paychecks that couldn’t be counted on to clear.

Backers apparently weren’t aware of the extent of the financial problems plaguing Spanglish until The Montford Group, which remained the building’s landlord, sued the business in February for unpaid rent. The investors at that point worked out an arrangement to keep the restaurant open with Fitzhugh at the helm; The Montford Group dropped its lawsuit in support of the plan led by locals.

“It’s refreshing to come in and have this kind of backing,” said Fitzhugh, who served as executive chef of RockSalt in Charlottesville, Va., before relocating to Charleston in 2015. He worked at The Establishment before the pandemic, but decided to take a kitchen job closer to home when the Broad Street restaurant closed.

He likened the arrival of new owners to “turning a light switch on,” adding they have approved new hires and paid back wages to employees out of their personal accounts.

For now, the restaurant still bears the Spanglish name and is offering the standard Spanglish dishes.

But Fitzhugh said his team “will slowly be taking the Band-Aid off” over the next month as they prepare to unveil their new name and menu. He credited the new owners with giving him the time and resources he needs to test out recipes and other ideas.