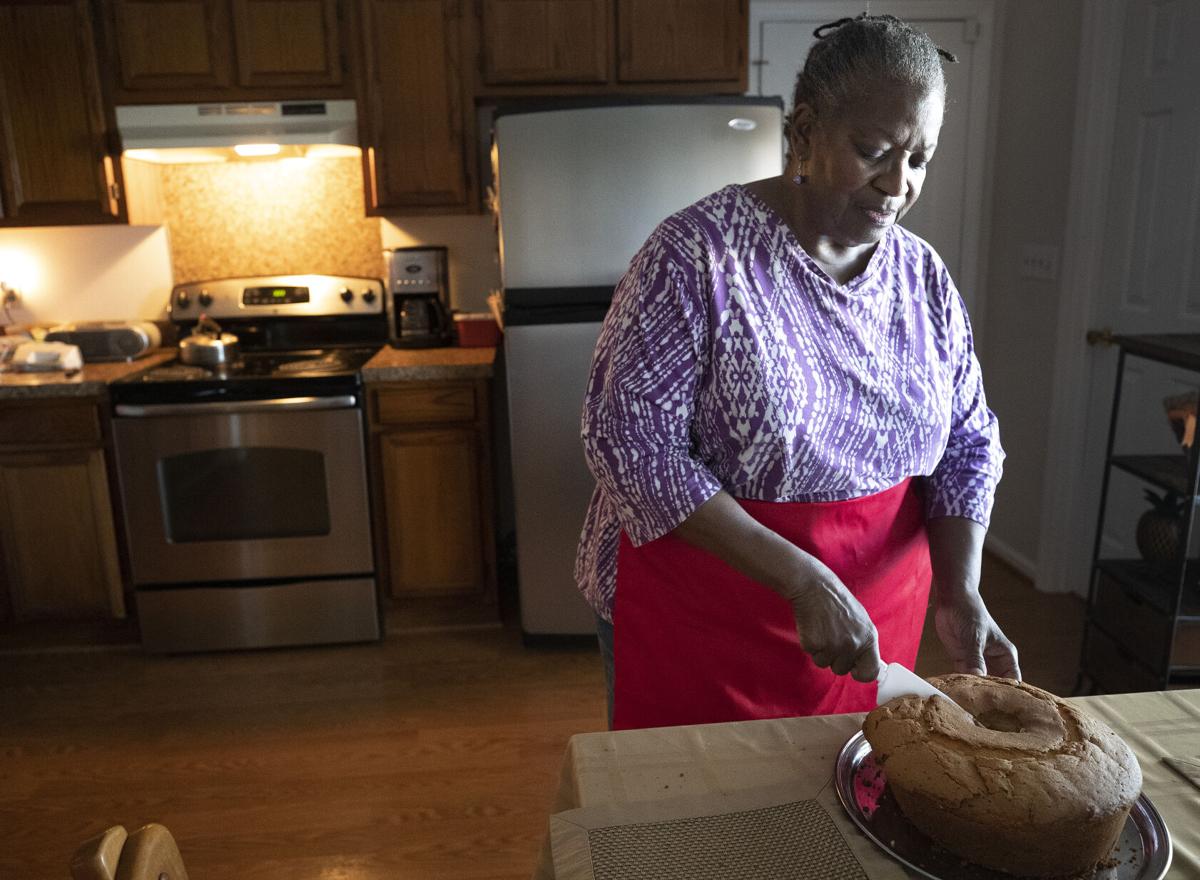 Jannie Brown serves up her pound cake, hot from the oven for her family Tuesday, Jan. 19, 2021 in North Charleston. Grace Beahm Alford/Staff 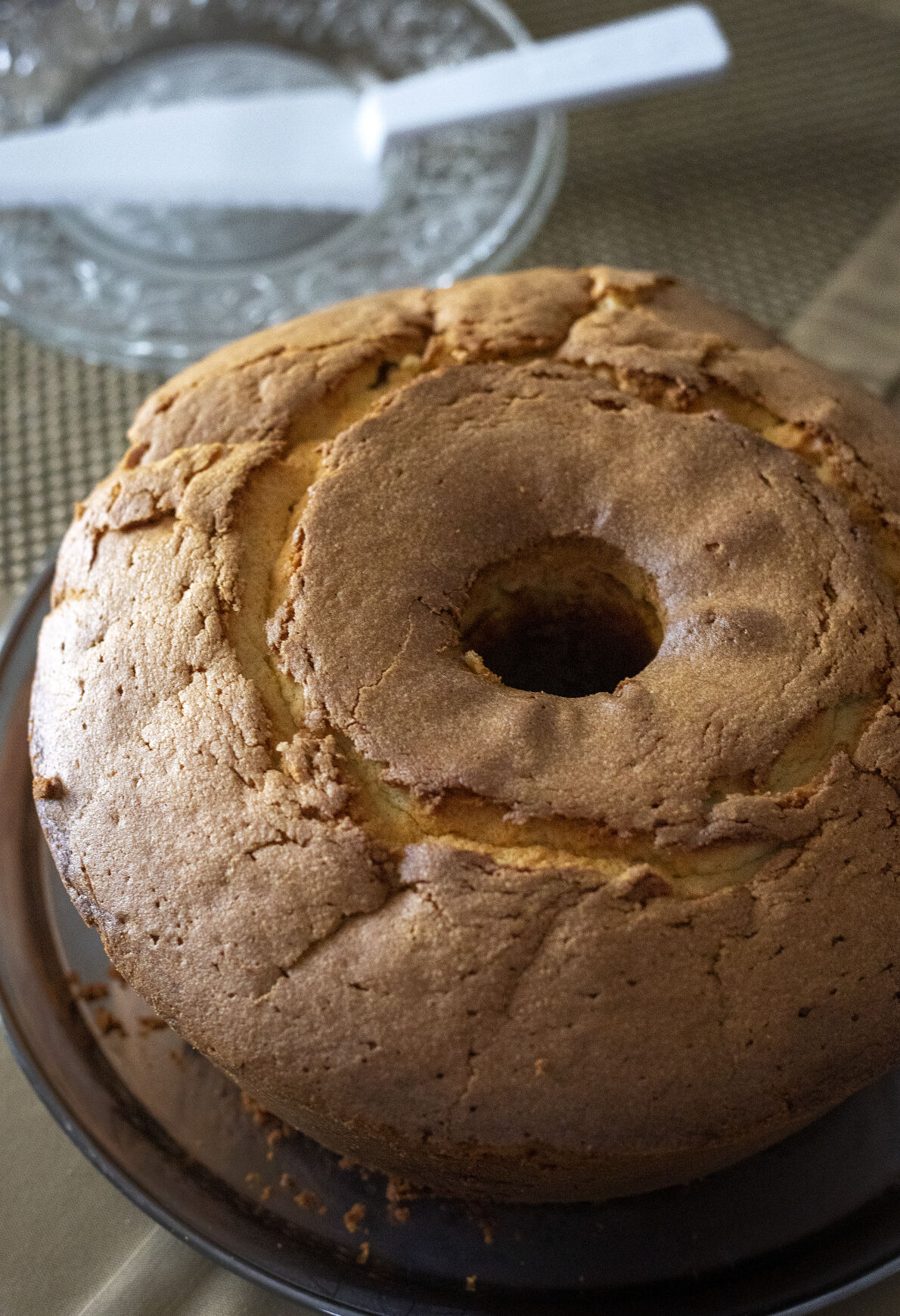 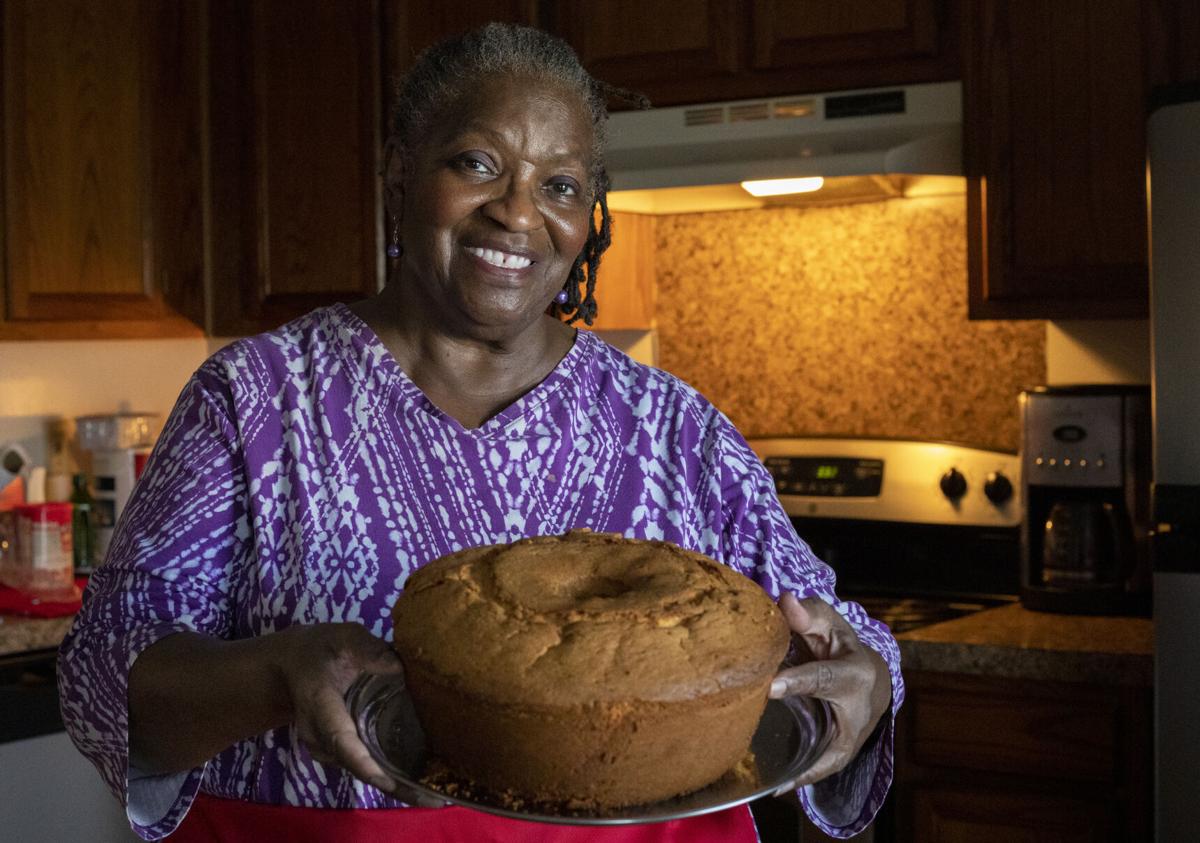 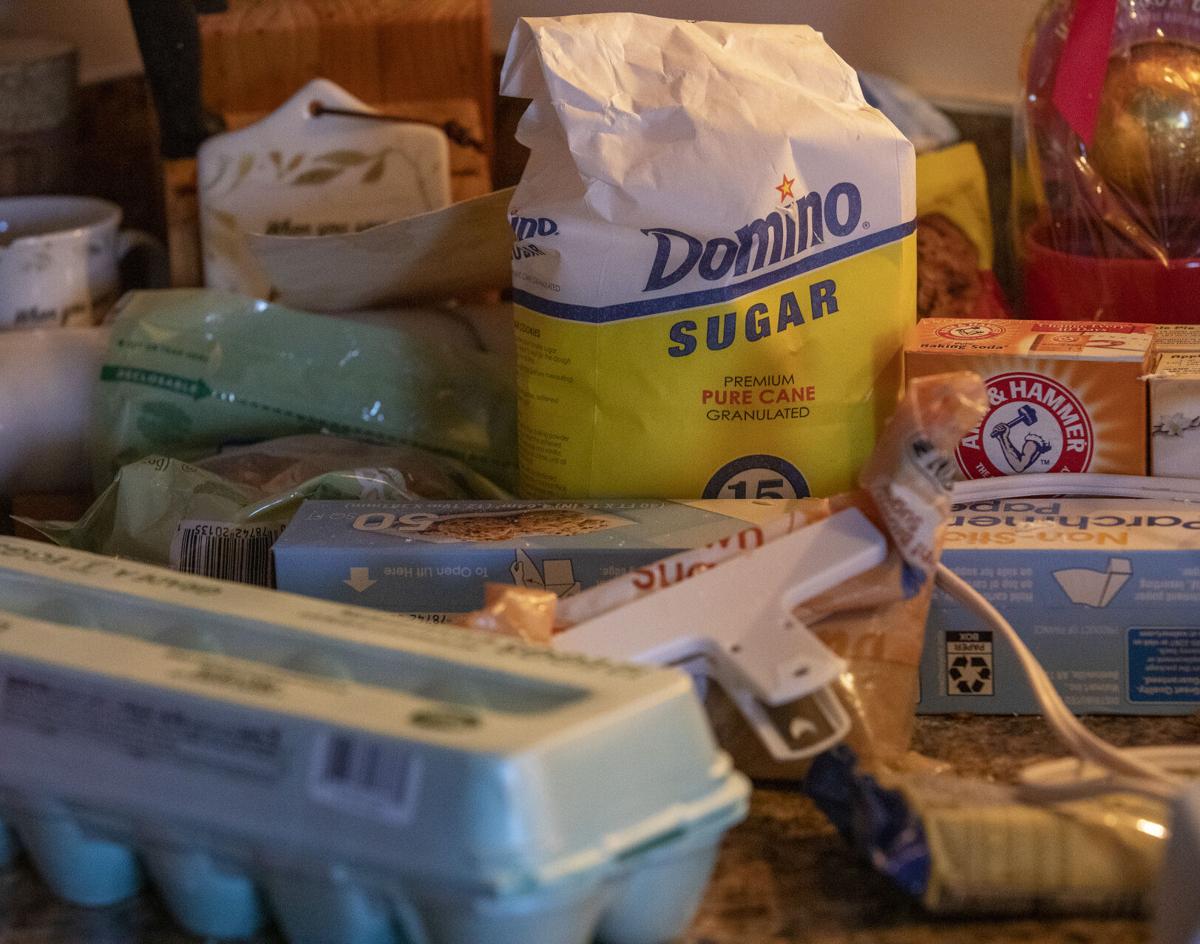 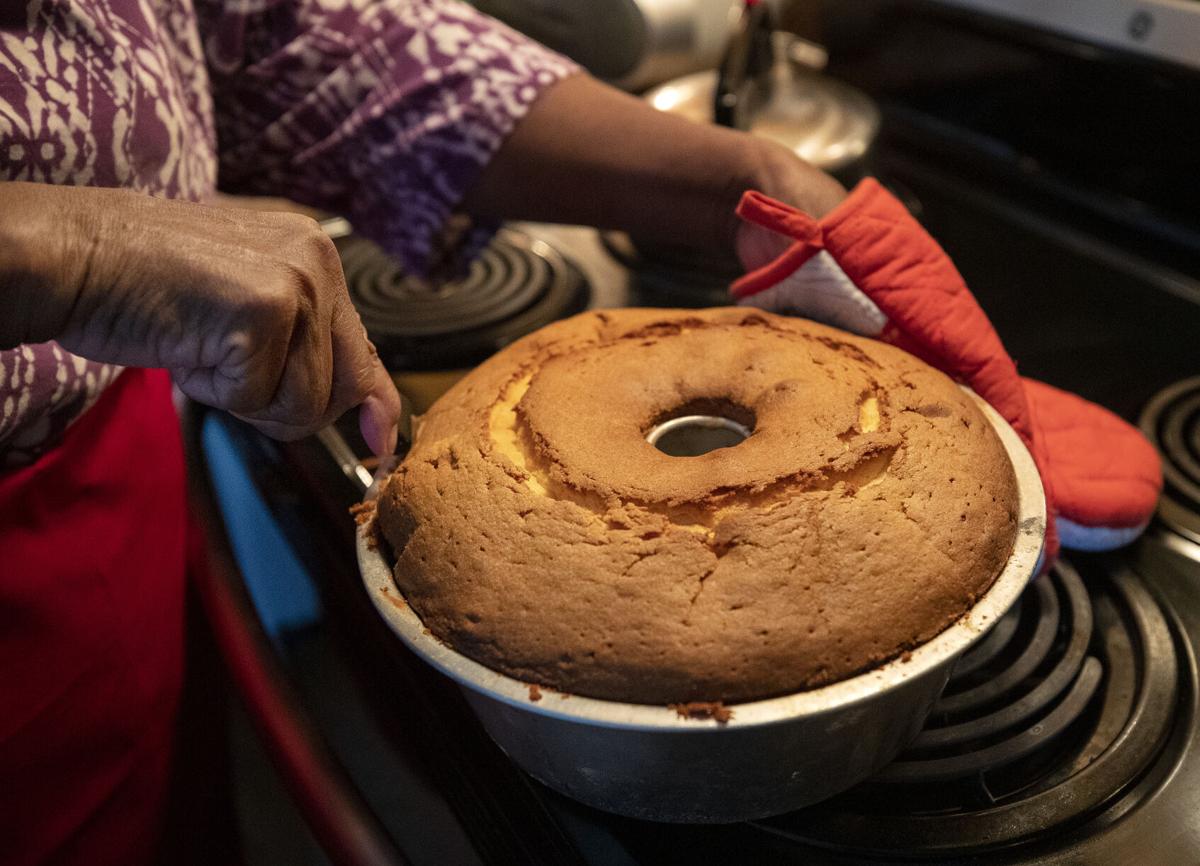 In the Black community, pound cake is as ubiquitous and ever present as a deck of playing cards. By that I mean most of the time you don’t actually seek out pound cake as much as it’s just always ... there. Its presence can be felt at almost every important Black function in America.

Funeral or a baby shower? Check.

Shoot, there’s a vanilla cremé pound cake sitting on the kitchen counter in my parents’ home as I type this.

When I asked my dad why he bought a pound cake for the house — seeing as New Year’s Day was weeks ago and no one in our family had experienced a funeral, baby shower or wedding in the month of January — he just shrugged and said in his West Tennessee accent: “Ya mama and I just had a taste for it.”

Pound Cake #1: This recipe has been pleasing pound cake fans for a century or more

No matter who I asked, no one seems to know why pound cake is so omnipresent in the Black community. But there are theories.

I spoke to one of Charleston’s premier Black culinary masters, BJ Dennis, to see if he had any answers.

He paused to gather his thoughts then continued, “I actually don’t know.”

The world-renowned, award-winning chef and Gullah Geechee cuisine expert was just as stumped as I was.

“When we think about who was doing all the cooking in Colonial kitchens, it was us, the enslaved Africans,” he ventured. “From dinner to dessert, we were the ones making everything.”

That covers the when. But when pressed if he can remember learning why or how the poundcake became entrenched in African American society, he drew a blank.

“Man, I really don’t know," he said. "I don’t make a lot of pound cakes, to be honest, but I know what you’re saying is real: Pound cake just seems to be everywhere.”

In fact, Chef Dennis mentioned that just a few weeks ago, one of his aunts, who lives in Atlanta, sent a 7-Up pound cake to his grandmother’s Clements Ferry home. It was an “I’m sorry we can’t see each other because of COVID” token of love.

While neither one of us could verify any connections between Black people’s love for pound cake and slavery, we did feel comfortable making one assumption about the mass appeal of this cake in the Black community: Unlike other cakes that have tens of ingredients and a dizzying myriad of steps, pound cake is relatively easy to create, even without a written recipe.

“A pound of this and a pound of that,” explains Chef Dennis. “That’s where the name ‘pound cake’ came from.”

While contemporary pound cakes have added a few more steps and ingredients to the process (as in the 7-Up pound cake), its origins are much, much simpler.

Pound Cake #2: If guests don't polish off this pound cake, it will stay good for a week

This idea that one can pinpoint the Black community’s love for a particular food or beverage is not farfetched. Take the French cognac, Hennessy. The bond between Black people and this spirit is both strong and well documented, if you know where to look.

The brand, which is responsible for almost half of the cognac produced in the world, has been around since 1765 — a full 11 years before the founding of the United States. But one of the connections between the brand and Black people started in 1896 when the president of spirits importer Schieffelin & Company, William Jay Schieffelin, befriended the founder of Tuskegee Institute, Booker T. Washington.

Schieffelin joined the historically Black college’s board of directors and reportedly never missed a meeting. Almost 30 years after his death, Moet-Hennessy S.A. bought his family’s company.

Before that, at the end of World War II, French residents would gift the cognac to Black soldiers as a sign of appreciation. In addition, Hennessy was the first spirit brand to advertise in both Jet and Ebony magazines, the premiere publications for Black America in the 1950s.

So it’s understandable that Henny would become the unofficial liquor of Black America. The same cannot be said for pound cake.

Historic ingredients lists for this well-known cake require very little understanding of math or actual culinary skills. Most ingredient lists I found, going back to the 1700s, ask for a pound of all the major ingredients.

Take, for instance, this recipe from the 1747 cookbook “The Art of Cookery, Made Plain and Easy.” Hannah Glasse calls for the following:

“(A) pound of Butter, beat it in an earthen Pan, with your Hand one Way, till it is like a fine thick Cream; then have ready twelve Eggs, but half the Whites, beat them well, and beat them up with the Butter, a Pound of Flour beat in it, and a Pound of Sugar, and a few Carraways …”

That’s it! I mean, this recipe asks the reader to stir all of this — by hand — for an hour before baking. Sheesh! And for the most part, since its creation in Northern Europe (most people place the cakes origin in England), pound cake was made like that for, literally, hundreds of years.

To get an idea of what current pound cake recipes require, I reached out to my homie Danetra Richardson, owner of Summerville-based bakery Swank Desserts. Her answer floored me!

“I don’t have a recipe for pound cake,” she said.

She gets asked about it, though.

“When I started my business, people were always asking me ‘What do you have for Black people?’" she said. "Because when it comes to baked desserts, Black people are looking for a few staple items — pound cake, red velvet cake, banana pudding.”

“When I first started my business, I was selling in barbershops and salons,” he says. “And Black people, they want the same things. In Charleston, they’re going to want chewies — number one — then banana pudding and red velvet. And of course, pound cake.”

While Daddy’s Girls Bakery sells mini pound cakes from time to time, he’s intentional about not having them available at all times. For Brown and Richardson, it’s not about being opposed to the staples. It’s about introducing the community to new flavors and creating new traditions.

“I’m not against pound cake,” Richardson says. “I really like it! That and banana pudding. I just don’t want to make it every day.”

This is partly because, for her entire life, pound cake has never not been present.

She also admits it’s partly because she didn’t dedicate her pastry education to just reproduce things that Black people grew up with, saying, “It warms my heart to see Black people — especially Black men — come into my shop and buy macarons. It shows that if you make it, and are consistent with quality, people will catch on.

“My mom still makes pound cake to this day. I’ve been trying to get one from her for a while now,” Richardson says, smiling. “That’s why I always tell people when they ask me for pound cake or a pound cake recipe: ‘Ask ya Auntie’.”

Armed with Richardson’s advice, my next call was to my family’s designated pound cake maker, Aunt Jane.

“Honestly, baby, I don’t know,” she says when asked about the reason for her pound cake-making. She laughs. “It’s like that story of the young lady, the ham hock and the pot.”

For the uninitiated, the story my Aunt Jane is referring to goes as follows: A little girl watches as her mother cuts off the end of a ham hock before putting it in a pot. Seeing this done her whole life, she finally decides to ask her mother why she does this.

She did, however, add a new theory for me to ponder. She believes pound cake is ubiquitous among African Americans because it’s the ultimate comfort food. She makes pound cakes when she wants to feel better or to make someone else feel better, like Chef Dennis’ aunt did for his grandma.

“Not only that,” Aunt Jane says, “it’s a celebratory food. Black people have this at all joyous occasions. From graduations to weddings to Sunday dinner. Anytime Black people want to celebrate something, pound cake is there.”

Nate Brown of Daddy’s Girl Bakery says that his mother is his family’s designated pound cake maker. When I got on the phone with Mrs. Ivone Brown, she agreed with my aunt’s assertion that pound cake is for celebrating:

“Baby Christening, baby shower, graduation, wedding, no matter. A pound cake is going to be there.”

When asked about what makes pound cake so special, Mrs. Brown says it’s the individual touch that each baker brings to the table: “I don’t believe a factory could ever perfect a pound cake recipe. There’s just a certain touch that we have that can’t be reproduced by a machine.”

When I asked her for a recipe she said, like Richardson and my aunt before her, that she doesn’t have one. “I can give you a basic idea, but each person is going to bring their own flavor to the recipe.”

She said that most people’s pound cakes include the following, all at room temperature:

“I need that light crunch on the top of my pound cake," she said. "And no butter streak! I’ll throw the whole cake away if I cut a cake and see that streak. My husband says I’m a perfectionist.”

I mentioned funerals earlier. I know some are reading this and wondering how funerals play into the whole celebration thing. I get it. Yes, funerals can be very sad. But for Black people, death is also seen as a reason to celebrate. Not because of the loss of life, but because of the deceased’s transition to his or her heavenly home.

No more having to prove one’s humanity to white supremacists. No more enduring the hardships of wealth disparity, environmental racism and police brutality, nor any of the historical oppositions that Black people have had to face for hundreds of years.

We call funerals “Home Goings” because we feel as if our loved ones are finally free from the trials and tribulations of this Earthly realm. Many Black Christians have always considered this world a stopping off point on their journey toward the ever-loving arms of their Lord and Savior.

And if getting to hang out with God, Jesus and any dead relative that you haven’t seen in a long time isn’t reason for celebration, then I don’t know what it is.