The Charleston area’s newest brewery should have to change its name, according to a trademark infringement lawsuit filed in federal court by a competitor. 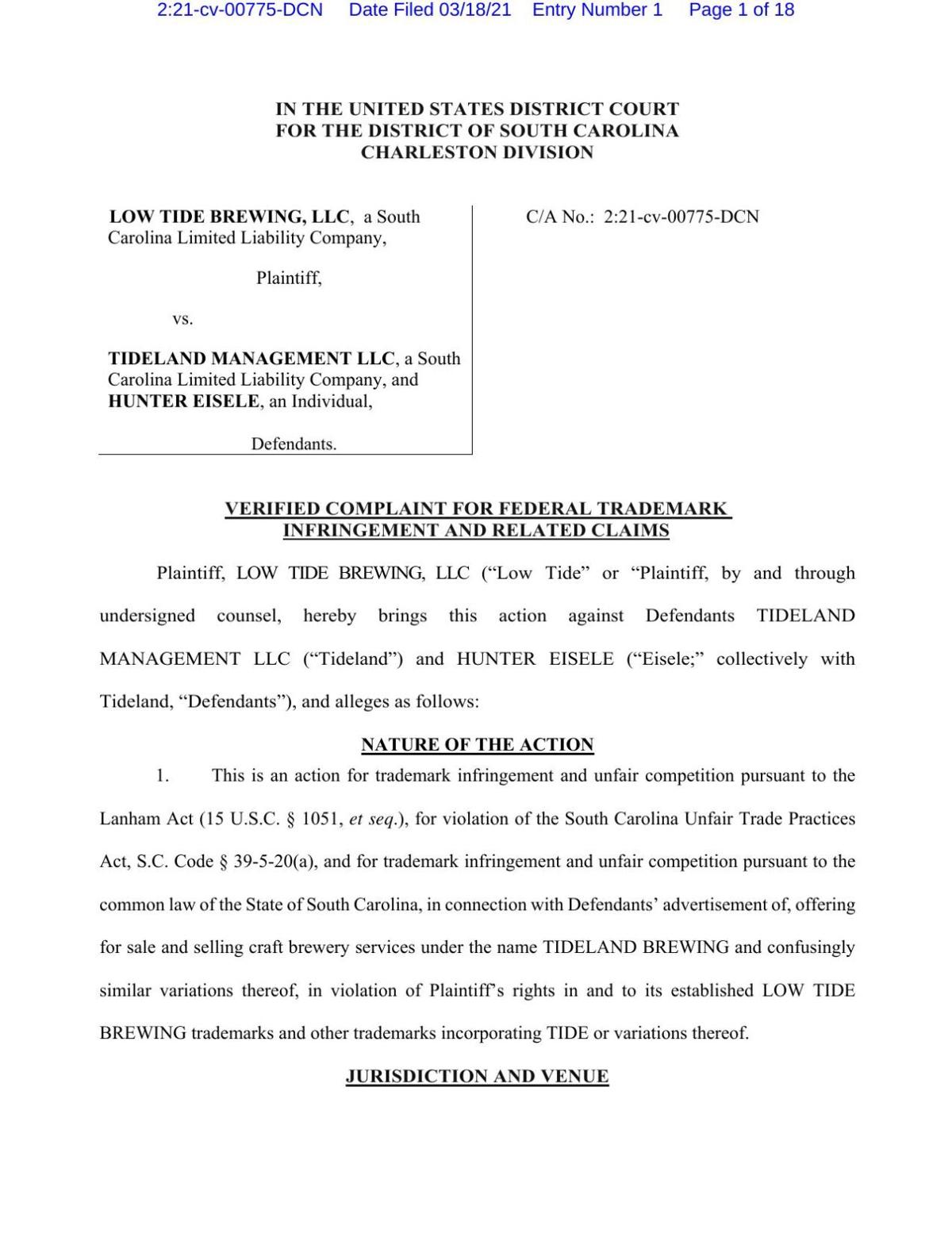 “The whole point of this is our clients have gone through the process to protect their intellectual property,” said Angelica M. Colwell of Nexsen Pruet, who is representing the seven-year-old Low Tide Brewing Co. “There aren’t any other breweries in this area that include the word ‘tide’ in them.”

According to the suit filed March 18, Low Tide owner Michael Fielding came up with the name for his future Johns Island brewery “while reflecting on his life choices and deciding on a career path” during a kayak tour. In 2015, he registered the first in a series of related trademarks.

Under the trademarked Low Tide name, Fielding produced beers such as Tide Chaser IPA, Weizen Tide and Reese’ding Tide (flavored with peanut butter in a nod to Reese’s, another trademarked brand).

Around the time Fielding started establishing Low Tide, he got to know Eisele, who in 2017 opened Twisted Cypress Brewing Co. The lawsuit claims Eisele told Fielding that before he joined the Twisted Cypress project he had considered opening a brewery called Low Tide, but discovered that Fielding had already registered the domain name.

Twisted Cypress in early 2019 shut down its West Ashley taproom, announcing plans to “permit and buildout TCBC 2.0” in another undisclosed location.

Its social media accounts remained quiet until fall 2020, when the brewery announced in a post illustrated by a palmetto tree logo that it would reemerge as Tideland Brewing.

Prior to sharing the news with the public, the lawsuit alleges that Eisele twice visited Low Tide Brewing Co. to find out how its owners would feel about him using the Tideland name.

“The Low Tide co-owner who discussed Tideland with Mr. Eisele suggested to him that he choose an alternative name,” the lawsuit states.

In addition to asking for Eisele’s outfit to be barred from using the Tideland name, Low Tide would like the judge to order Tideland to turn over to Low Tide all profits “derived as a result of unfair competition.”

The injunction telephone hearing is scheduled for 1:30 p.m. April 8 in front of Judge David Norton.