A downtown Charleston restaurant owner says a federal civil rights lawsuit alleging she fired a chef because he wasn’t Mexican is part of an ongoing campaign of harassment and intimidation against her.

Pink Cactus’ original head chef, Jeremy Paige, claims in the suit that restaurant owner Brooke Warden “told two employees that she wanted a chef ‘with a more ethnic feel’ so (the) restaurant would have a more ‘authentic image.’ ” Paige alleges that immediately prior to terminating him on March 19, 2019, Warden promoted an inexperienced chef to the head chef position “because he had been born in Mexico.”

Paige was born in the U.S., according to the lawsuit.

Warden firmly denies all of the allegations contained in the lawsuit, filed this month in U.S. District Court in Charleston, following Paige's receipt of a Right to Sue notice from the Equal Employment Opportunity Commission. 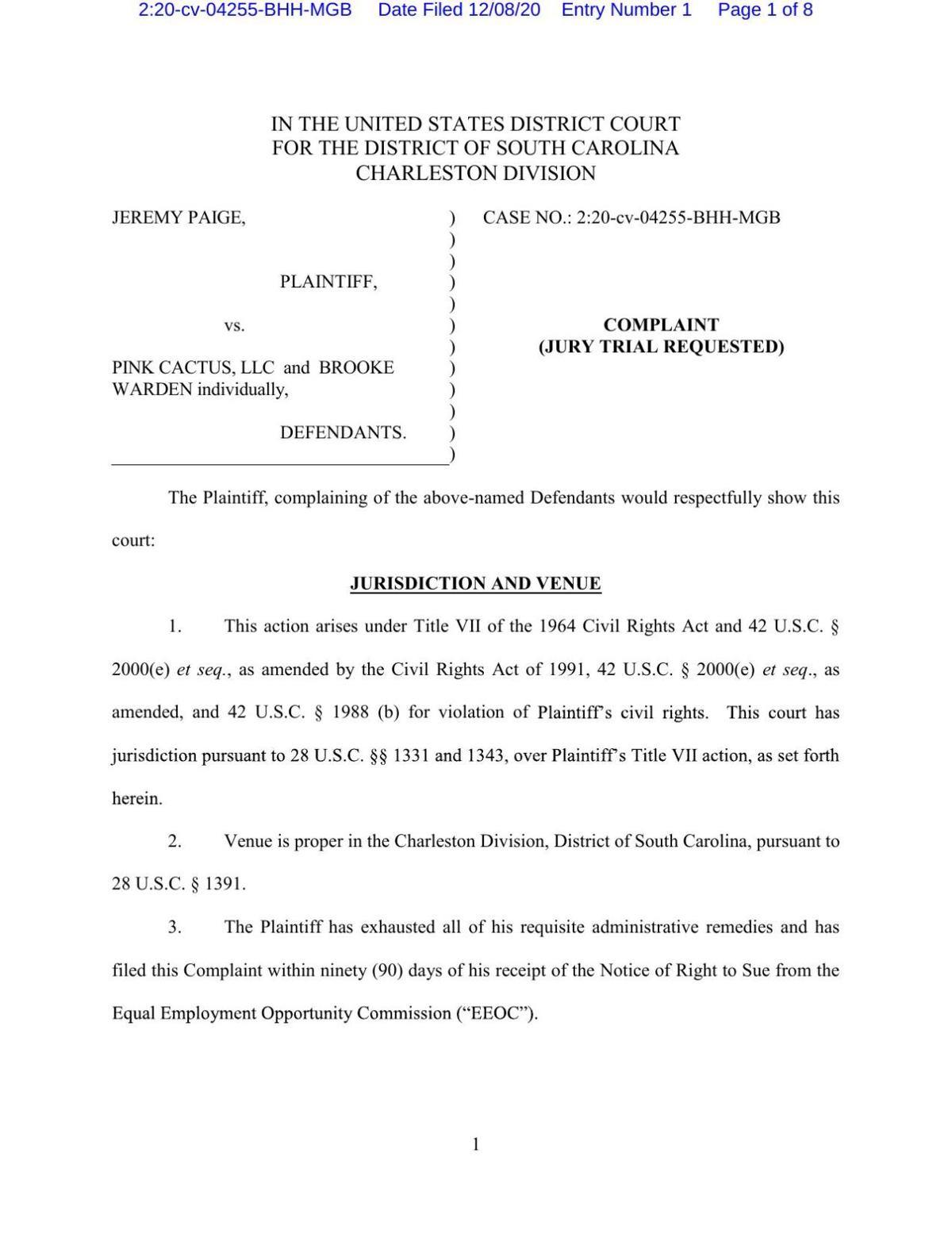 “I would never say anything like that,” she says of the quotes attributed to her, adding, “I don’t know when we were having casual conversations like that: I was trying to get licenses and talk to contractors. I didn’t have time to pee.”

According to Warden, she tearfully fired Paige within two weeks of opening her Mexican restaurant on Spring Street because of poor job performance.

“It was devastating because I had paid him for eight months,” Warden says of the drawn-out construction process leading up to the restaurant’s debut. “But he would get upset during service: He wasn’t labeling things, he wasn’t wrapping food correctly, he would talk back to me. I had to make a decision. I had to command the ship.”

As a 30-year-old first-time restaurant owner, Warden says she made “novice mistakes,” such as hiring an executive chef long before she had a definite opening date. Still, she stands by her choice to cut ties with Paige, particularly after she allegedly found him sleeping on the kitchen floor during the restaurant’s stressful first weeks.

“Don’t you think I’d like to take a nap on the floor?” she remembers thinking.

Paige’s attorney, Nancy Bloodgood, declined to comment on the case, saying she doesn’t discuss pending litigation. But the suit alleges “Warden created a false summary of performance to justify her wrongful termination of Plaintiff,” referencing a warning notice that Paige claims was written only after he was fired.

What happened following Paige’s termination is another matter of contention. Warden says she believes Paige was responsible for an Instagram account which in March 2019 started taking swipes at Warden’s competence.

“That’s a very scary thing right now, just thinking about (someone) saying I don’t know how to run a restaurant,” says Warden, who also accuses Paige of spreading similar rumors through the local chef community. “Why am I being bullied?”

In the lawsuit, Paige counters that Warden defamed and slandered him by telling people he cut up the pink-toned cactus plants she had rooted in front of her restaurant. (She filed a police report in connection with the Dec. 21, 2019, vandalism, but the report was not immediately available from the Charleston Police Department.) He claims he was in California at the time of what Warden terms “a cactus attack.”

“I was freaked out,” Warden says of finding 70 scattered cactus pads. “Who knows how important those cacti are to me? This was intimidation.”

The lawsuit asks for “lost back and future wages, lost income and benefits,” as well as court costs and “further legal and equitable relief.”

As for the head chef who succeeded Paige, Warden says he didn’t last long. She’s served as Pink Cactus’ chef for most of the time it’s been in business, although her mother has lately joined her in the kitchen to help.