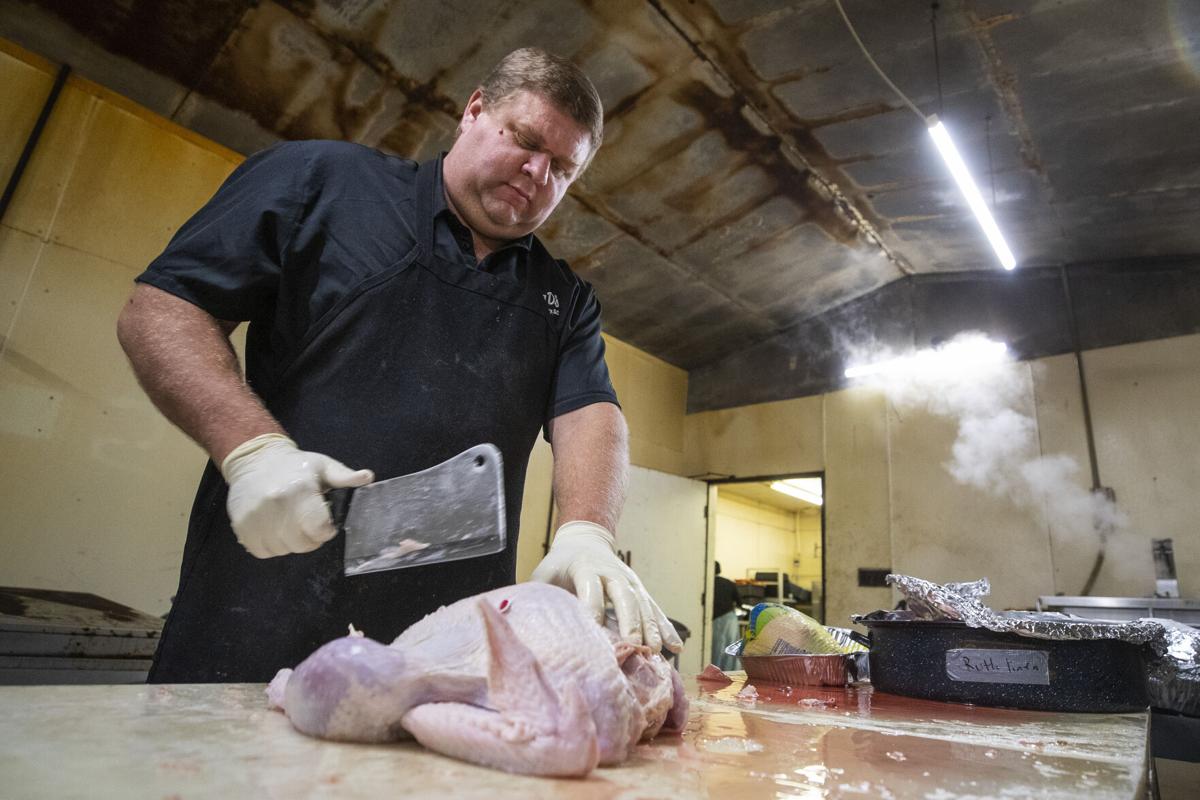 Kurt Davis prepares a customers’ turkey to be smoked at Big D's B-B-Q Barn in Hemingway on Wednesday, November 25, 2020. The restaurant, which was originally co-owned by Davis’ grandfather, has been cooking Thanksgiving turkeys for customers for over 35 years. Lauren Petracca/Staff 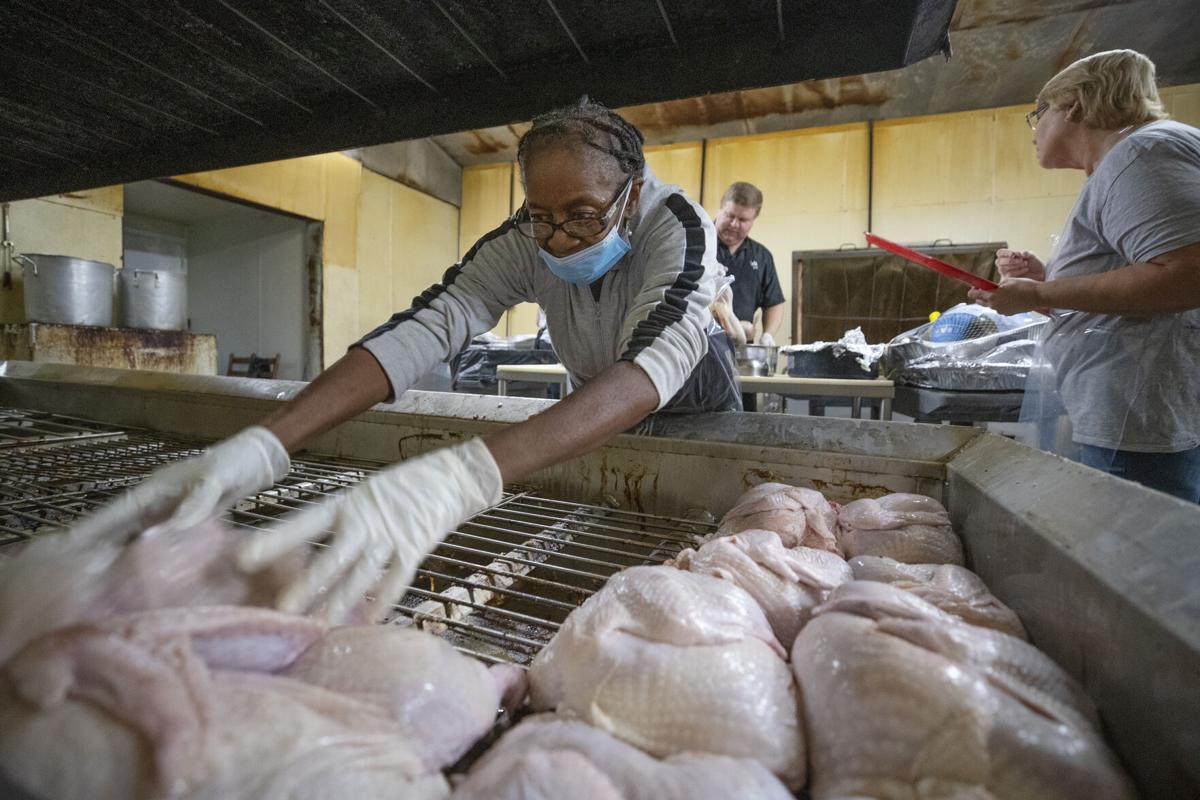 Lois Woodberry places turkeys on a cooker at Big D's B-B-Q Barn in Hemingway on Wednesday, November 25, 2020. The restaurant smoked 63 turkeys for customers, who dropped them off the day before. Lauren Petracca/Staff 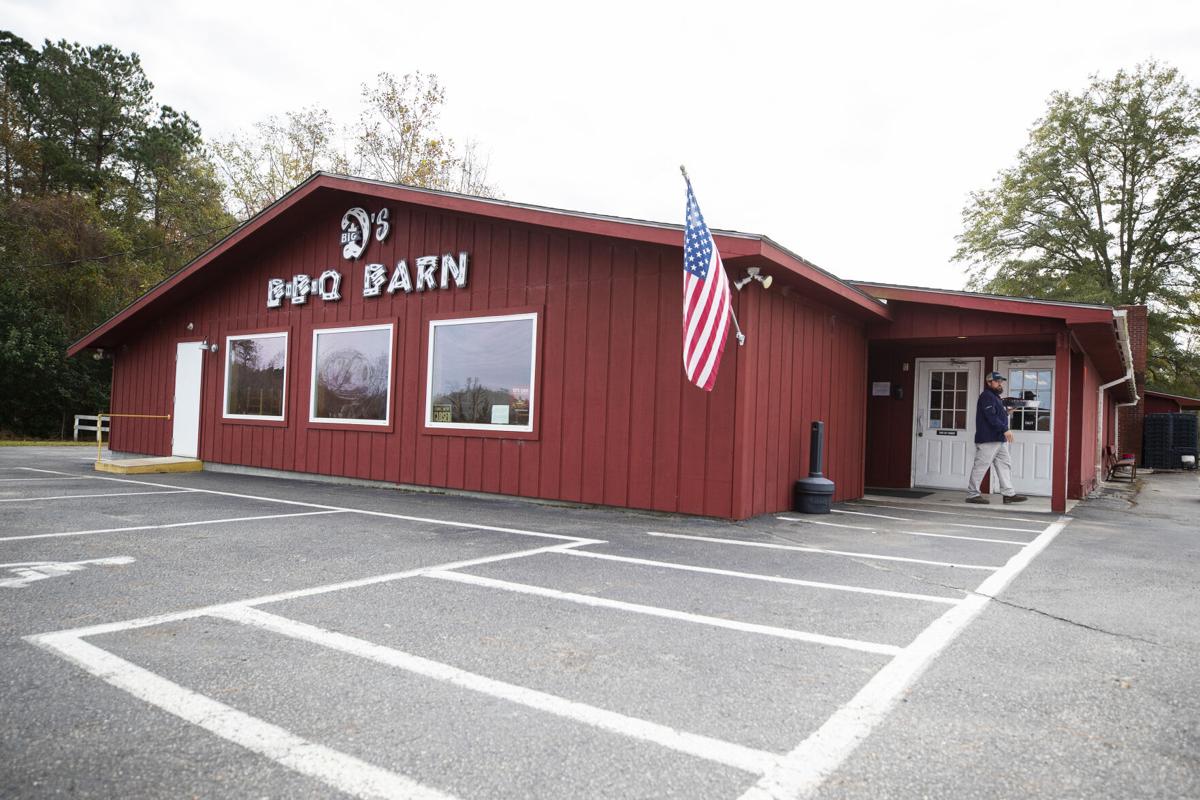 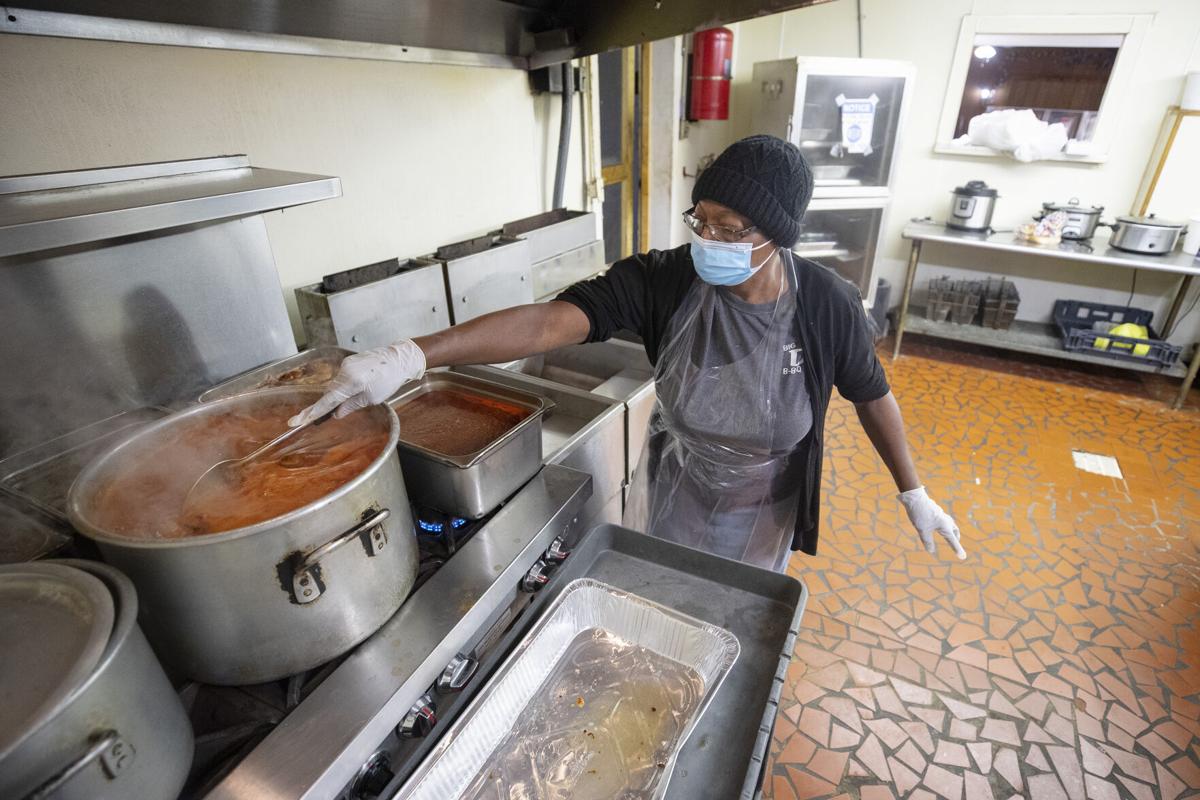 Ethel Brown stirs a chicken gravy as a turkey soaks in the sauce at Big D's B-B-Q Barn in Hemingway on Wednesday, November 25, 2020. The gravy recipe has been in Kurt Davis’ family for over 40 years. Lauren Petracca/Staff 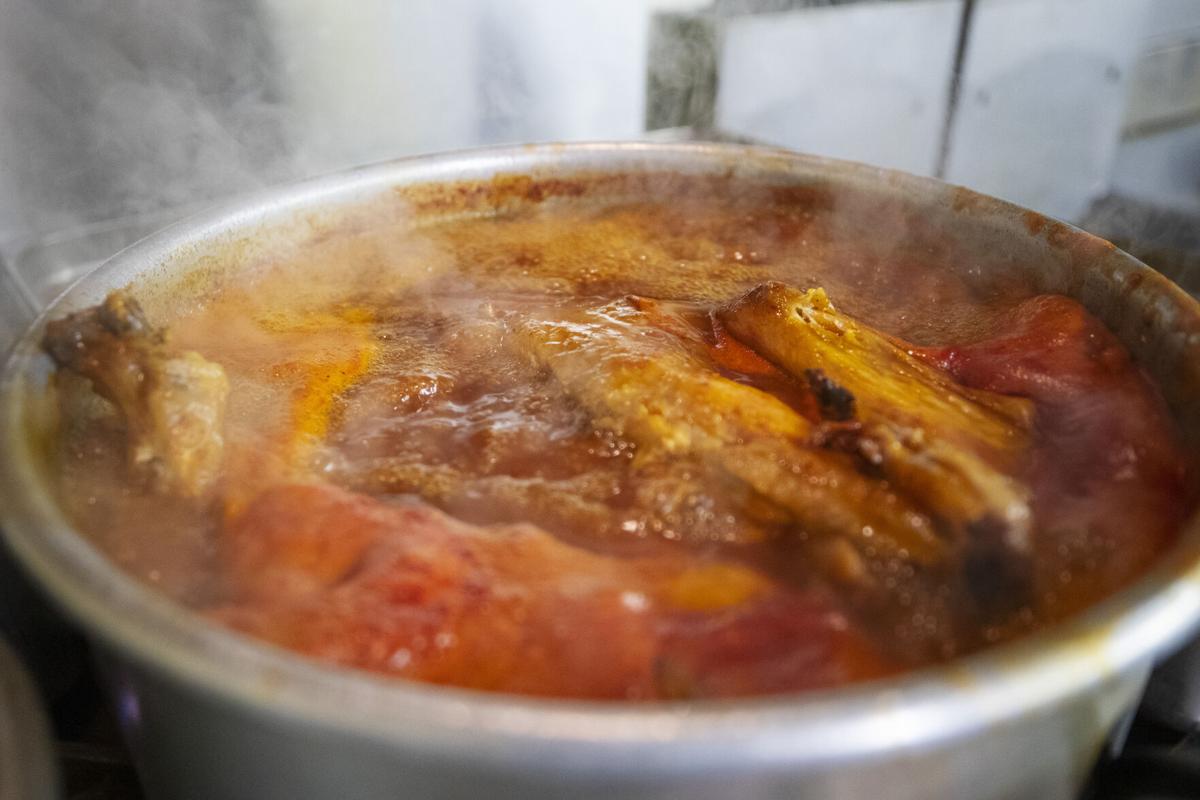 Turkey soaks in a pot of chicken gravy as it is prepared for a customer at Big D's B-B-Q Barn in Hemingway on Wednesday, November 25, 2020. Lauren Petracca/Staff 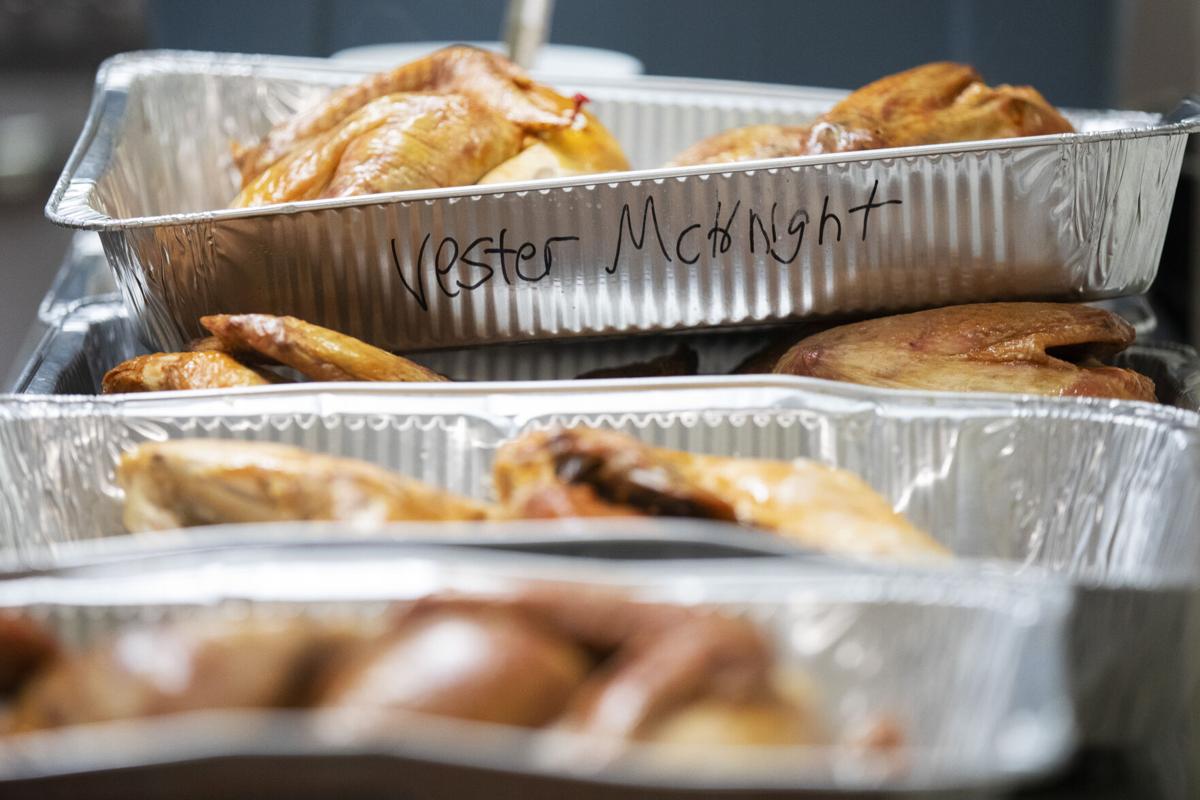 Smoked turkeys sit in pans waiting to be covered in sauce before being picked up by customers at Big D's B-B-Q Barn in Hemingway on Wednesday, November 25, 2020. Lauren Petracca/Staff

HEMINGWAY — Thanksgiving celebrants aren’t supposed to gather in large numbers this year. But that doesn’t mean their holiday turkeys can’t cluster up in one place.

Every cooker at Big D’s B-B-Q Barn on Wednesday morning was tightly packed with turkeys dropped off by Pee Dee residents who rely on the restaurant to split, smoke and sauce their main dish. The 126 turkey halves varied slightly in size and color, depending on its place of purchase and its owner’s pre-seasoning philosophy, but they snuggled together as closely as sunbathers on a crowded beach.

It’s a ritual common across South Carolina, where dozens of rural barbecue pits annually invite customers to bring in their Thanksgiving and Christmas birds.

“I guess people don’t want to cook and they figure out for the money it ain’t worth it,” said Byron Rikard of Rikard’s Roadside Barbecue in Ridge Spring.

Jim Roller of Destination BBQ, a South Carolina barbecue blog, recently compiled a list of nearly 50 smokehouses that offer their holiday services: While that tally includes several newfangled restaurants which promote turkey breasts with a choice of chef-approved sides and bourbon-spiked pie, it’s dominated by places where the approach is considerably simpler.

At Big D’s, customers can drop off a thawed turkey on Tuesday and return on Wednesday with $22 to reclaim it.

It's possible to have a whole Thanksgiving with one part of the bird, Nathalie Dupree says

“My granddaddy had a cousin that brought it to his attention,” owner Kurt Davis said of the program, which represents a rare deviation from the 47-year-old restaurant’s standard Friday through Saturday schedule.

The holiday offering hasn’t changed much since the early 1990s, except that the turkeys are now dipped in a glimmering sauce of ketchup, Worcestershire sauce and vinegar before being packaged for pickup.

Also, the program’s gotten more popular over the years. With so many turkeys to track, the most critical component of the operation involves laying out the turkeys in an organized grid so each customer gets back the bird he or she submitted. As Dale McDaniel pulls each turkey from its enamel oval roaster or disposable aluminum pan, she calls out the customer’s name and records it on a chart, using a red cafeteria tray for a clipboard.

Davis said there’s only been one mix-up: A customer later confided in him that she got back a bigger turkey than she’d left at the restaurant. But customers still get nervous.

“People will send it with a piece of wire around the leg or cut the leg right here,” he said, pointing at the tip of the drumstick.

In fact, most of the turkeys are fairly interchangeable: The majority of them have to be freed from Butterball’s yellow netting or Honeybaked’s white netting before Davis can clear out the giblets and cleave the turkey in two. He dispatches each bird with a definitive thwack, which McDaniel and co-worker Lois Woodberry had trouble replicating when Davis briefly left the pit.

“It’s frozen,” McDaniel retorted, slicing back and forth.

Despite the national chatter about downsized Thanksgiving dinners, Davis didn’t notice any smaller turkeys this year.

He pays careful attention to size because a 12-pound turkey and a 24-pound turkey won’t cook at the same speed. The process usually ends in a flurry of temperature checks and creative rearrangements: A behemoth bird may end up sharing space in an electric cooker with a tray of whole hog barbecue and a sweet potato casserole.

By 2 p.m., Big D’s aims to have all of the turkeys back to their owners, who are sternly told not to show up at the restaurant until getting a call that their turkeys are ready.

Although the restaurant smokes more than 100 turkeys over Thanksgiving and Christmas, Davis said Big D’s doesn’t see as much business as it once did. As soon as turkey fryers became common appliances, he said, folks started to think they could cook for themselves.