A Johns Island brewery is so serious about protecting its trademark that this month it asked a federal judge to issue a preliminary injunction against North Charleston’s Tideland Brewing, a request that the judge apparently had some fun rejecting.

“Low Tide has not made a clear showing of its likelihood to succeed on the merits of its trademark infringement claim. Without that showing, Low Tide is up the creek,” U.S. District Court judge David C. Norton concluded in his April 12 opinion. “Accordingly ... Low Tide’s request for an injunction (is) dead in the water.”

While Norton declined to order Tideland to immediately cease using its name, the trademark infringement lawsuit will proceed. In its lawsuit, Low Tide Brewing Co. claims Tideland owner Hunter Eisele is trying to capitalize on Low Tide’s years of success by choosing a brewery name with “tide” in it.

As Norton noted in his ruling, a preliminary injunction is “an extraordinary remedy” that penalizes the defendant before the case is heard.

Consequently, a trademark holder seeking a preliminary injunction must satisfy all parts of a four-prong test. One of those prongs involves demonstrating that consumers are likely to be confused about who made the product they’re enjoying.

Norton agreed that Low Tide’s trademark is valid and distinctive, but found it wasn’t strong enough to cause customer confusion.

A trademark is considered strong if its elements are uncommon. Tideland’s attorneys argued that 800 federally registered trademarks include the word “tide” or “tidal,” including those belonging to breweries in Myrtle Beach and Savannah. 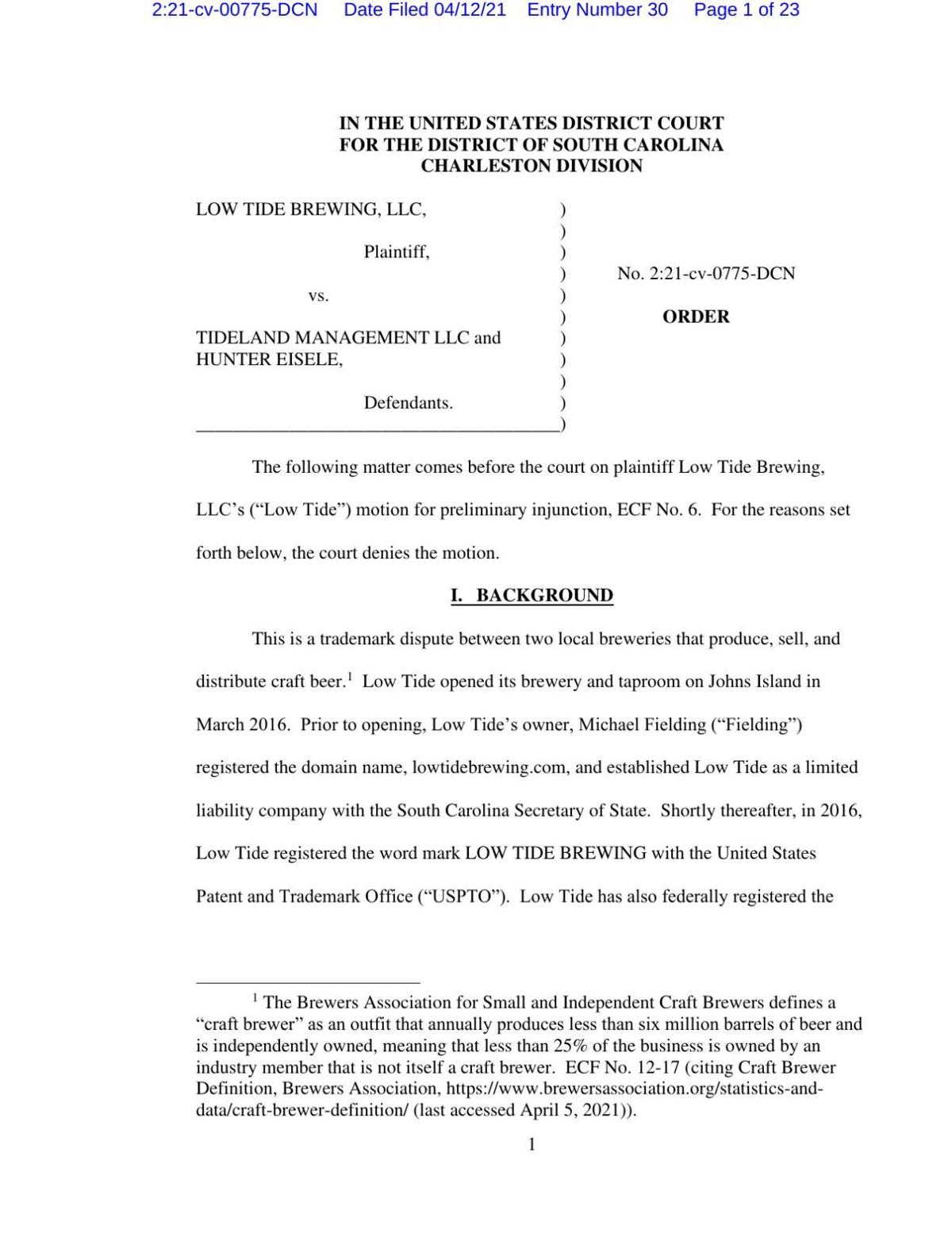 “The instances of third-party use of the word ‘tide,’ locally and within the relevant industry, are enough to take the wind from Low Tide’s sails,” Norton wrote. “As such, Low Tide’s endeavor to wash away the prevalence of the word ‘tide’ in coastal commerce holds little water.”

Furthermore, Norton ruled the two names aren’t so alike that consumers would struggle to tell them apart.

“The marks are, at best, somewhat similar, meaning that Low Tide, now swimming upstream, has failed to demonstrate that the factor tilts the inquiry in its favor,” he wrote.

Finally, Norton wasn’t swayed by Low Tide’s evidence of actual customer confusion. Low Tide cited a single instance in which one of its former employees called Tideland to find out if the new brewery was a second location of Low Tide.

“The court declines to take the bait,” Norton wrote.