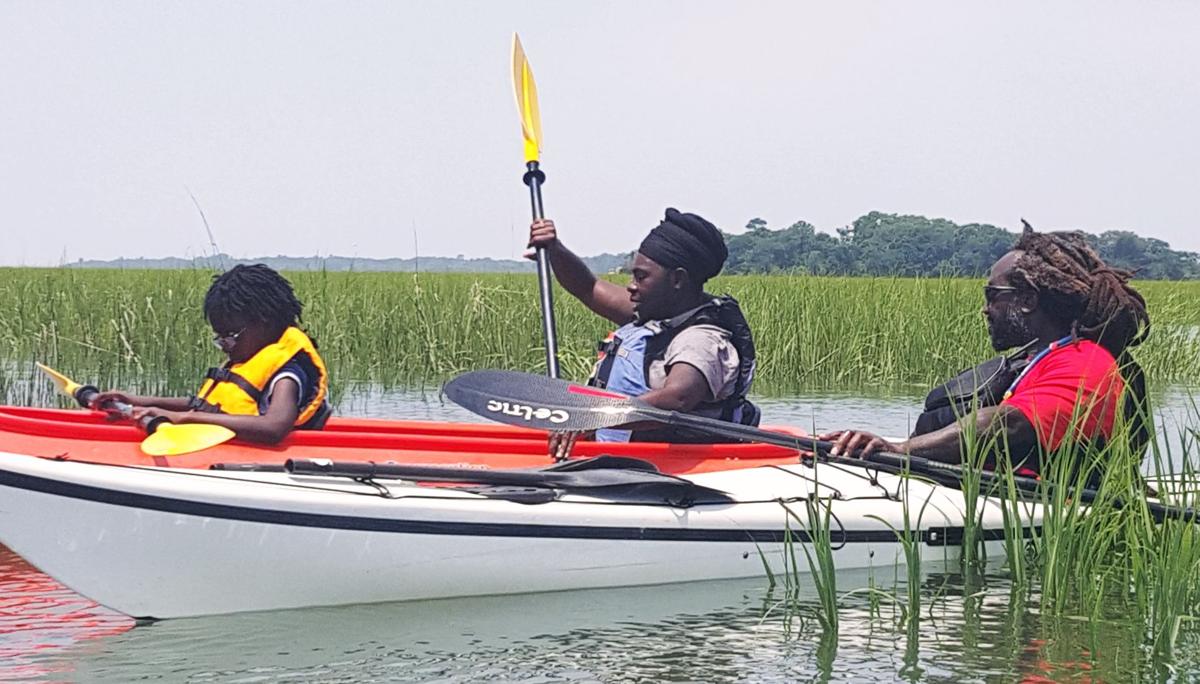 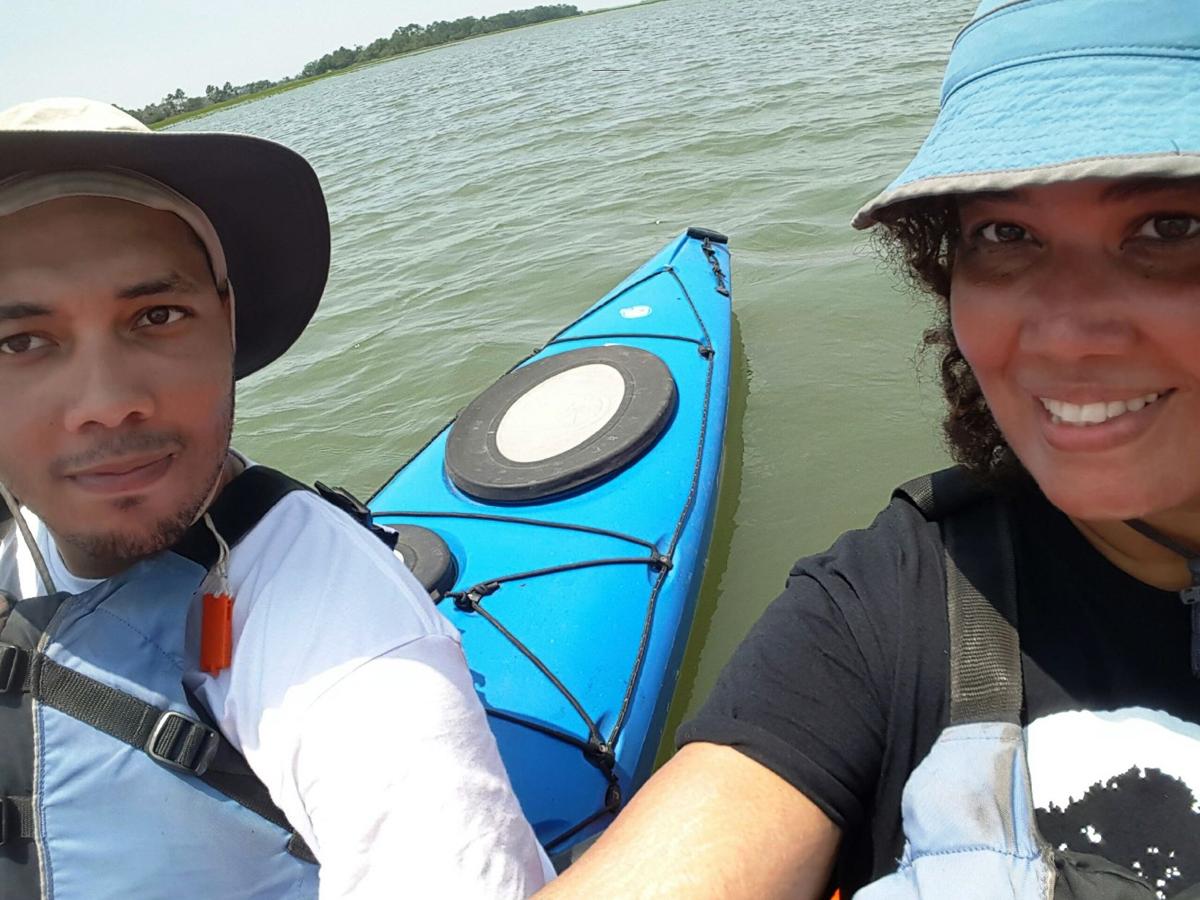 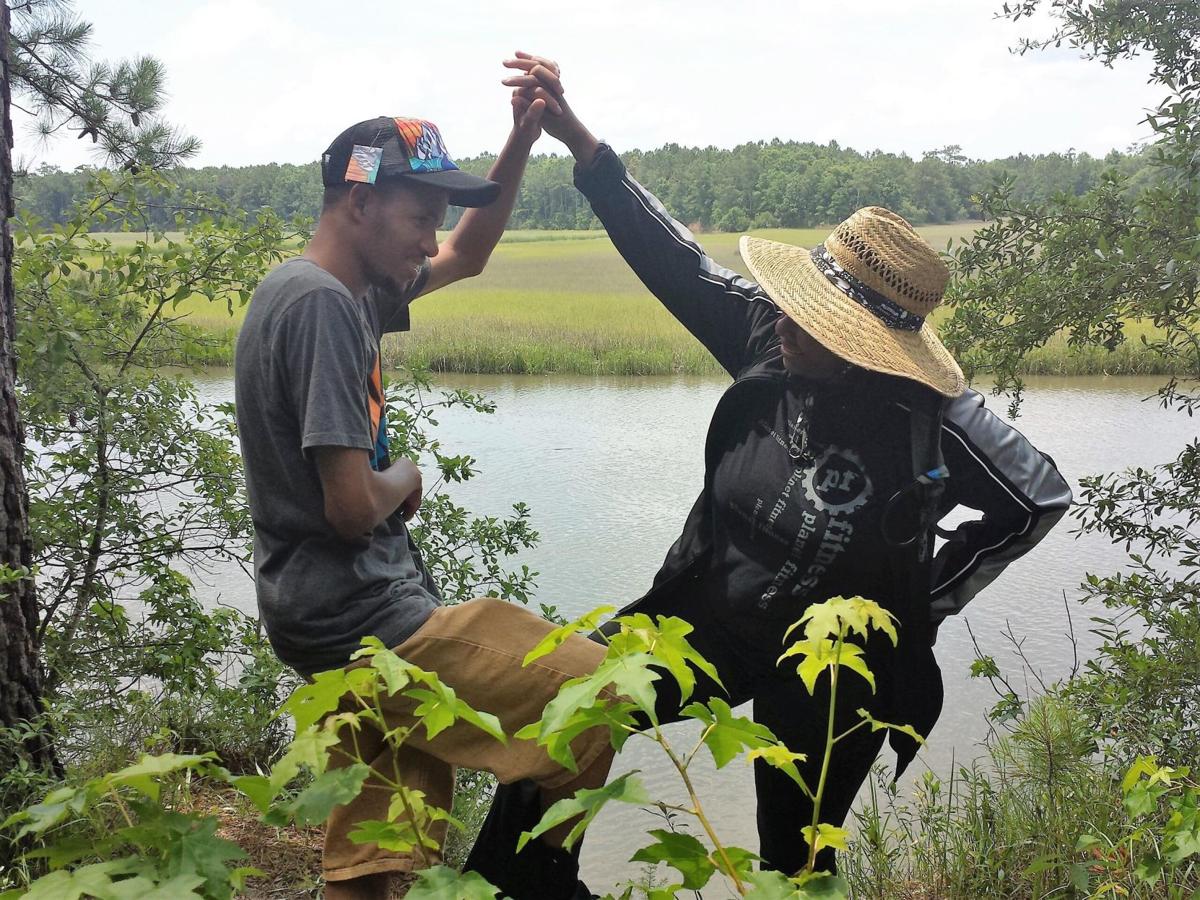 Outdoor Afro provides African Americans a chance to connect with nature and each other. Provided 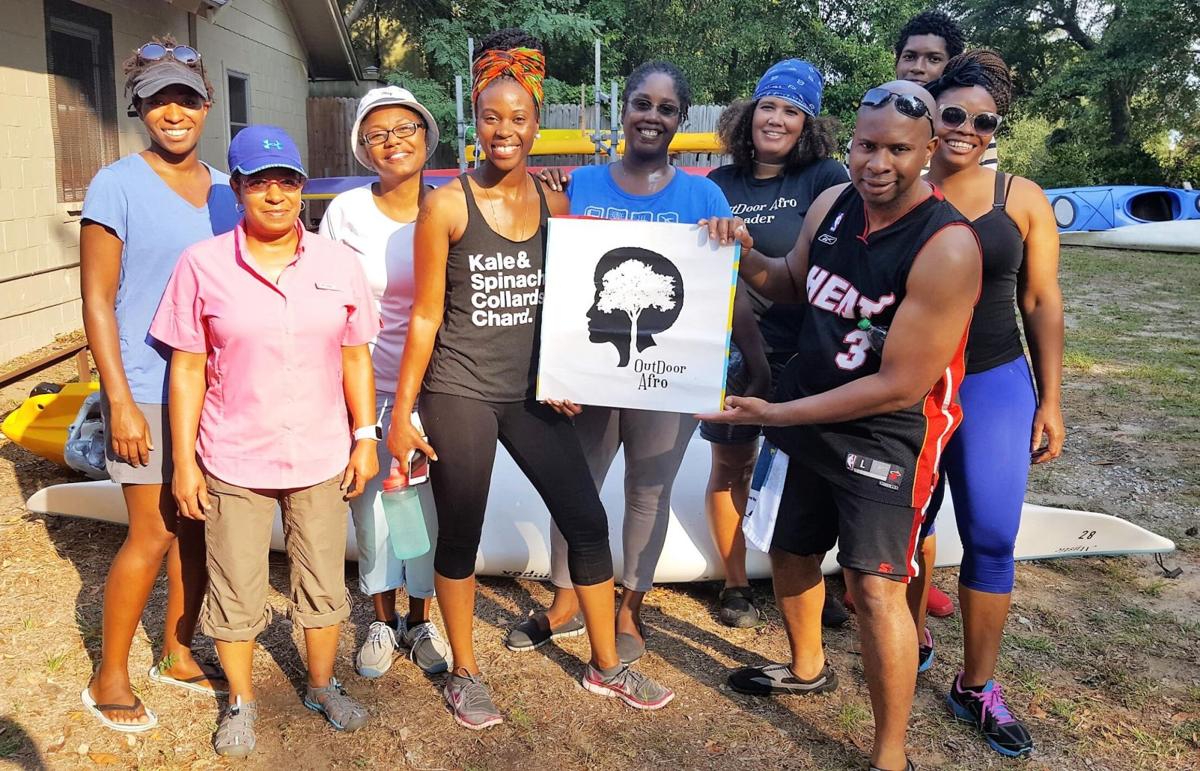 Among the variety of outings offered by the local Outdoor Afro group are kayaking trips. Provided 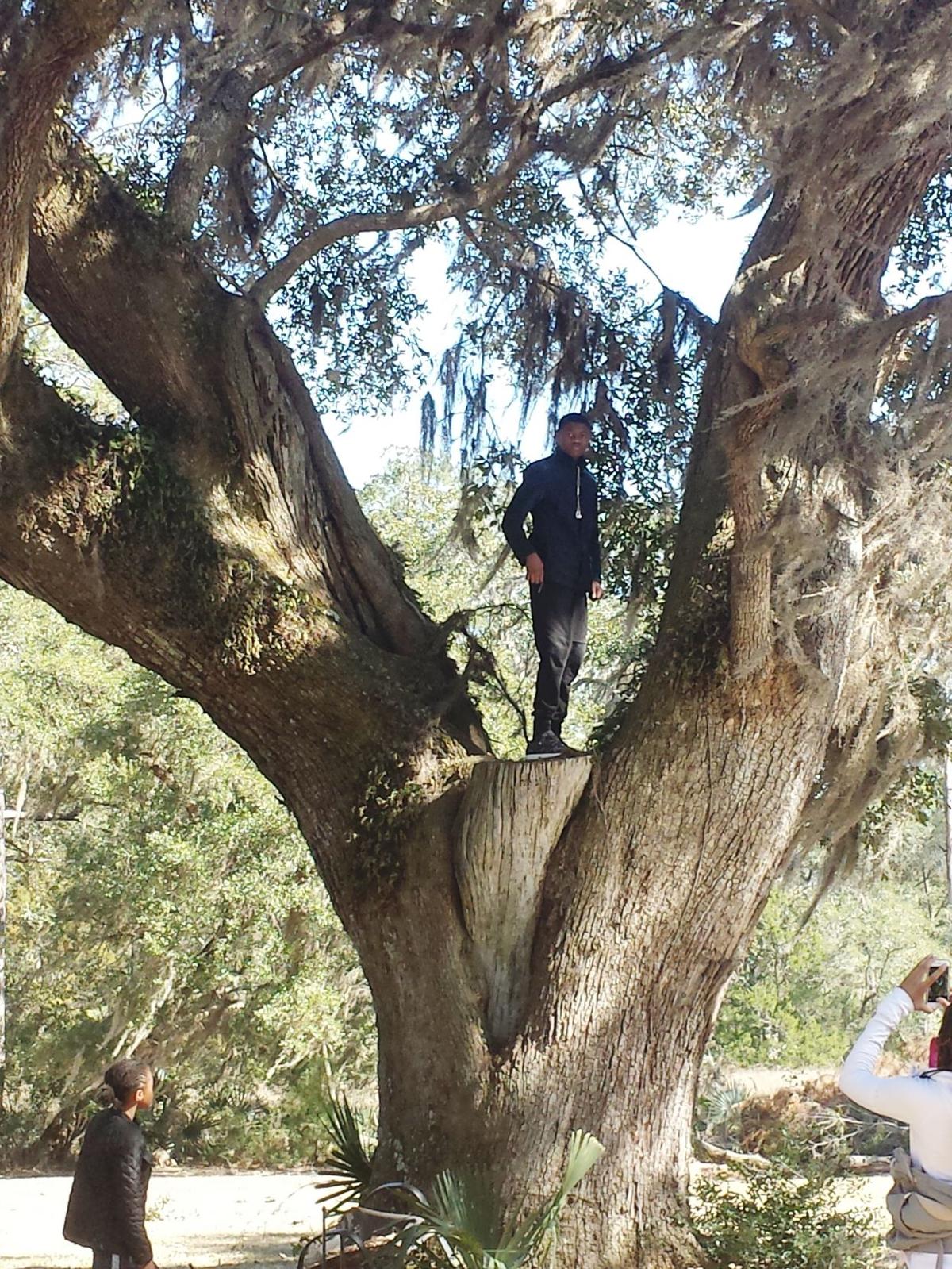 Among the trips by the local Outdoor Afro group was a visit to Slann Island Plantation. Provided 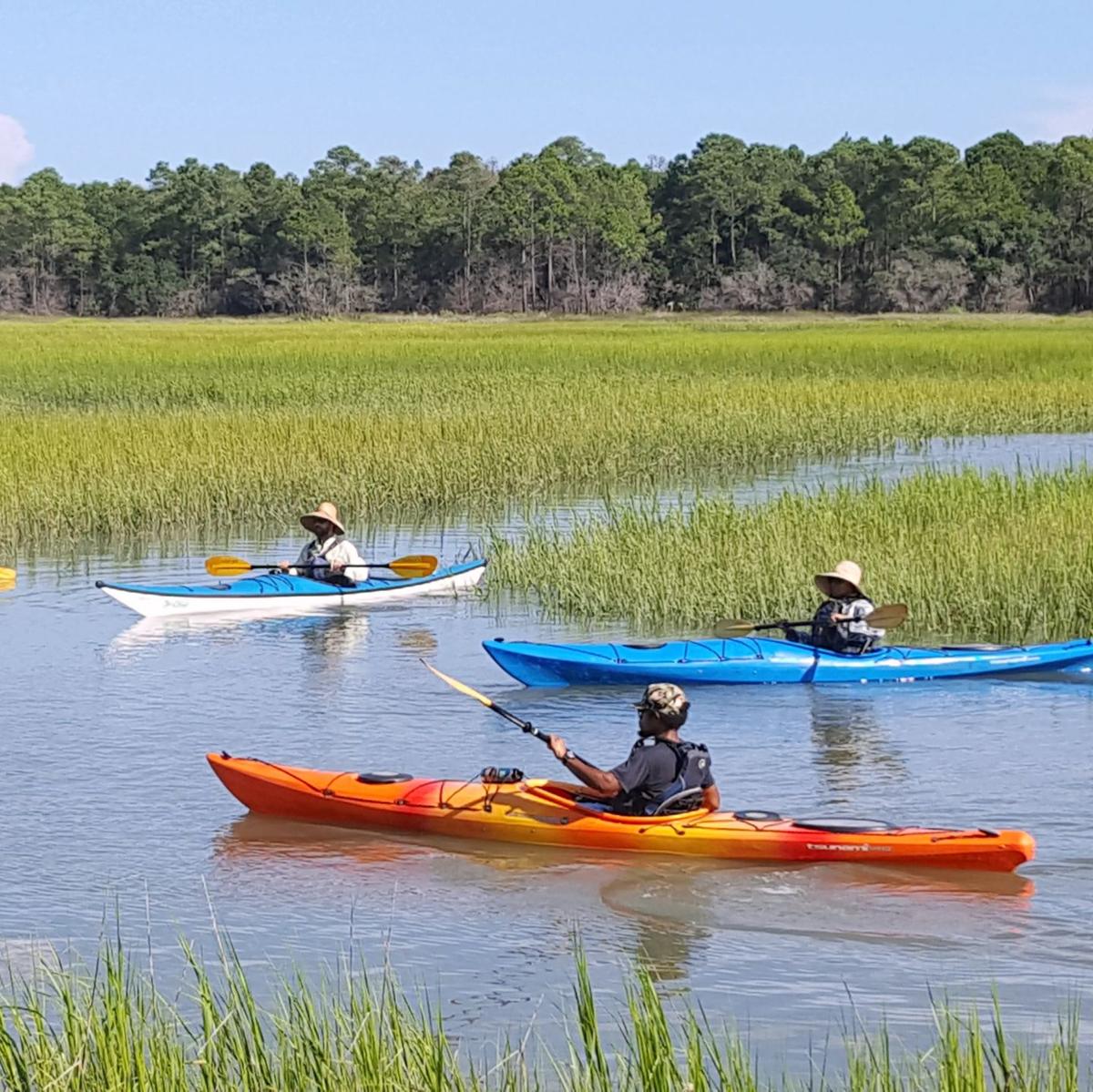 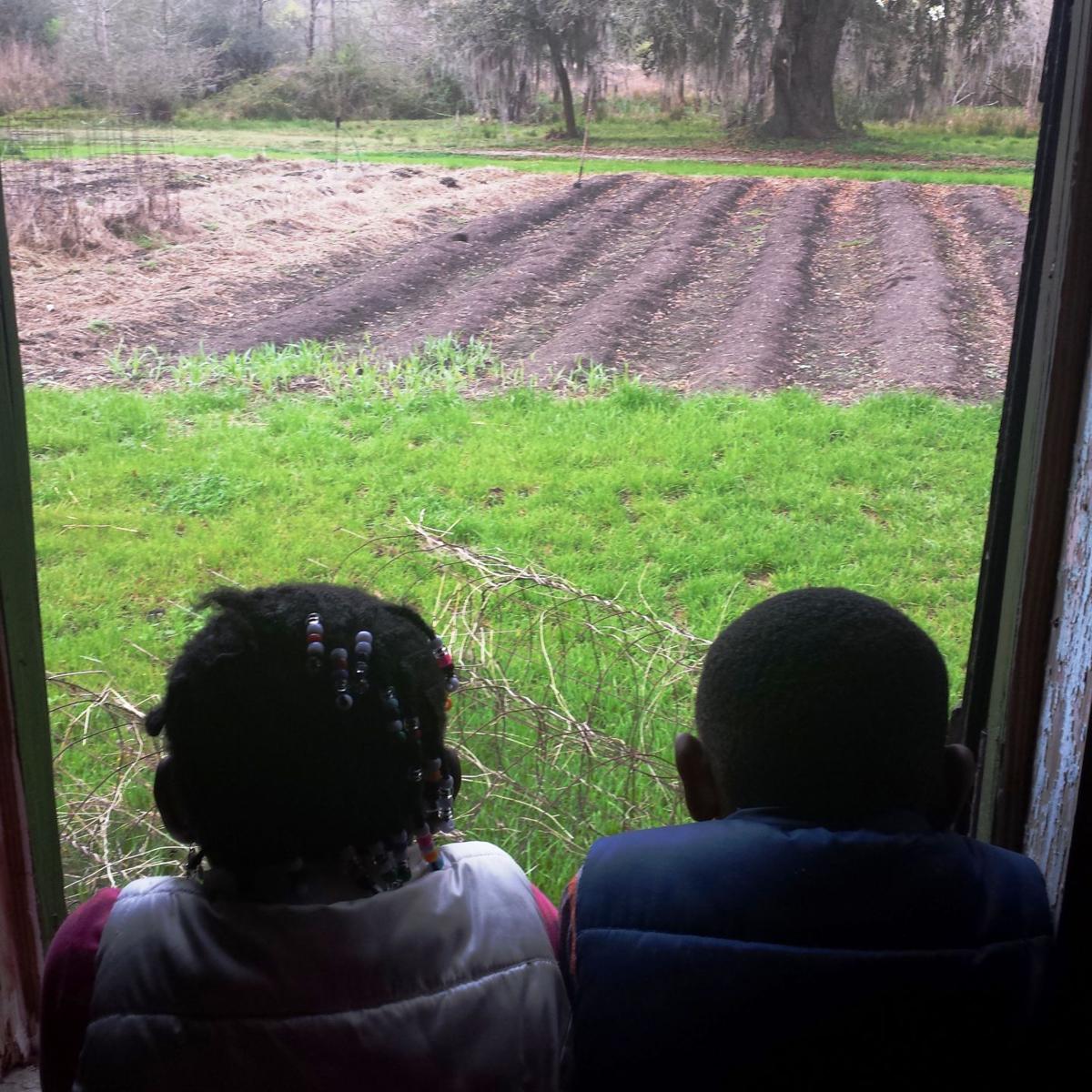 Among the themes of Outdoor Afro is that outings can go beyond the realm of hiking, camping and paddling and can provide experiences such as visiting farms. Provided

Outdoor Afro provides African Americans a chance to connect with nature and each other. Provided

Among the variety of outings offered by the local Outdoor Afro group are kayaking trips. Provided

Among the trips by the local Outdoor Afro group was a visit to Slann Island Plantation. Provided

Among the themes of Outdoor Afro is that outings can go beyond the realm of hiking, camping and paddling and can provide experiences such as visiting farms. Provided

When Adrienne Troy-Frazier moved from Chicago to the Lowcountry in 2012, she looked forward to having year-round access to the outdoors because of the moderate winter weather.

“I wanted to do more camping and kayaking and so we (she and husband) headed out to do that. When we got there, we were not always greeted warmly. In fact, our first camping trip left us feeling less than welcome and wondering why we were receiving stares,” recalls Troy-Frazier, adding that it was at odds with her experiences in the Midwest.

Troy-Frazier, who works as executive director of Berkeley County First Steps, also noticed that she saw less diversity in outdoor settings in South Carolina. When she showed up for outings, organizers often seemed surprised that a black person was participating.

“I started to wonder why I wasn't seeing more black people outdoors here,” says Troy-Frazier. ”I knew I wasn't the only black person (in the Lowcountry) that loved the outdoors."

Her searches soon led her to a national group called Outdoor Afro, which is dedicated to connecting black people to nature via outings.

Founded by Rue Mapp in California in 2009, Outdoor Afro now has 18,000 members in 28 states with more than 60 leaders who organize hikes, camping and kayaking trips, bike rides, birding outings and more.

In a story in the current issue of Sierra magazine, Mapp talked about confronting some of the obstacles in connecting blacks with nature.

She recalled how her father, who grew up in East Texas, knew people who got lynched, often when they were alone in the woods.

Mapp says the black community has “had generations of terror in the woods in our collective imagination. Until I asked my dad that question (about lynching), I didn't realize the discomfort that the outdoors can have for us.”

Overcoming the present also is a part of Outdoor Afro’s mission. In the wake of a string of police-involved fatalities of black people, the group has organized opportunities for African Americans to find solace in nature, such as through “Healing Hikes.”

Troy-Frazier admired the work that Mapp and Outdoor Afro was doing so much that in 2013, Troy-Frazier applied to be a leader for the Lowcountry and was accepted.

Her first outing in May 2013 was simple: strawberry picking at Ambrose Farm on Wadmalaw Island. Only six people attended, all family members. She recalls approaching a black couple who also were at the farm and telling them about Outdoor Afro.

“They were friendly and shared that they came out each year to pick strawberries for pie on Mother’s Day. Once again I was reminded that we may connect to the outdoors for different reasons, but we do have a connection,” says Troy-Frazier.

Since then, the local group has done a variety of activities from pumpkin-carving at Joseph Fields Farms on Johns Island, doing a day hike at the Sewee Shell Ring trail, attending the Black Cowboy Festival in Rembert, crabbing at Brittlebank Park, collaborating with Y2O for youth surfing lesson, cast net fishing and environmental conservation.

The local Meetup has 499 members, but Troy-Frazier says attendance at activities typically ranges from just a few to three dozen.

Among the regulars is Ashley Vaughns of West Ashley who often goes on outings with her husband, Kendrick Vaughns, and their 3-year-old son, Jeremiah.

“I grew up doing a lot of things outside,” says Vaughns, who grew up in the South but moved here two years ago from Omaha, Neb. “We (her family) do outings on our own, but we were also looking for like-minded people to some of things together as a community.”

She likes how some of the local Outdoor Afro events combine the outdoors with African-American history.

Vaughns says African-Americans long have been “engaged in the outdoors” for generations, through activities such as gardening and farming, but often were barred from swimming pools nor had the time, money and transportation to do conventionally recognized outdoor activities. Some still face those challenges.

Marvin Johnson, who is retired from the military and works part-time as a machinist, describes himself as “outdoorsy” but that when he gets out, it’s usually alone or with his son, Marvin Johnson Jr., who is now 16.

“I find it hilarious that people think that black folks don’t swim, or camp, or enjoy the outdoors, because we kind of do,” says Johnson, who grew up on James and Johns islands where he enjoyed playing in the creeks and woods.

Johnson has been involved with the local Outdoor Afro for a year and hopes it will grow, in part because “in the black community, there is a generation of kids who don’t (do outdoor activities).”

One observation he has made of the local Outdoor Afro is that, of the activities he’s been involved in, most of the participants are professional women. He hopes more men will become active in it.

Like Vaughns and Johnson, Troy-Frazier has been involved in more mainstream outdoor and environmental groups, such as the Sierra Club and the Charleston Natural History (Audubon) Society, as well as local outfitters.

And while all work to be inclusive and welcoming, she says part of that is telling the narrative that is inclusive of African American and indigenous American history and contributions.

“Our ancestors had an important relationship with the land here. The disconnect (in some outings) often exists when that narrative isn’t shared. It is important for everyone to know that history. In most of our Outdoor Afro outings we imbed our connection to the outdoor space we’re are visiting or activity.”

Troy-Frazier says Outdoor Afro leaders work to include stories, ideally first-hand from members themselves, so that outing participants can hear how they are connected.

“Mr. Fryar told us about being an amazing, self-taught topiary artist who challenged the stereotype that ‘Black people don’t keep up their yard.’ ”

“I think we don’t usually hear about how we are connected in ways that are most meaningful for us. In the Lowcountry, the common history about our connection to the outdoors is a slave narrative. While that is an important story for us to remember, there are far more stories that can be told about our contributions to local communities here and across America.”

Like many Outdoor Afro groups, local members are kept updated on outings primarily via a Meetup page.

The upcoming Outdoor Afro events include a "Black History Tour with Damon Ford: A Stroll with Thurgood Marshall" at 12:45 p.m. Feb. 19, a hike at Caw Caw County Park "Site of the Stono Rebellion" at 2 p.m. Feb. 26, and a beginners paddle on Shem Creek at 2 p.m. March 18.

Registration is required at https://www.meetup.com/Outdoor-Afro-Charleston-SC/

For more on the national group, go to http://www.outdoorafro.com/