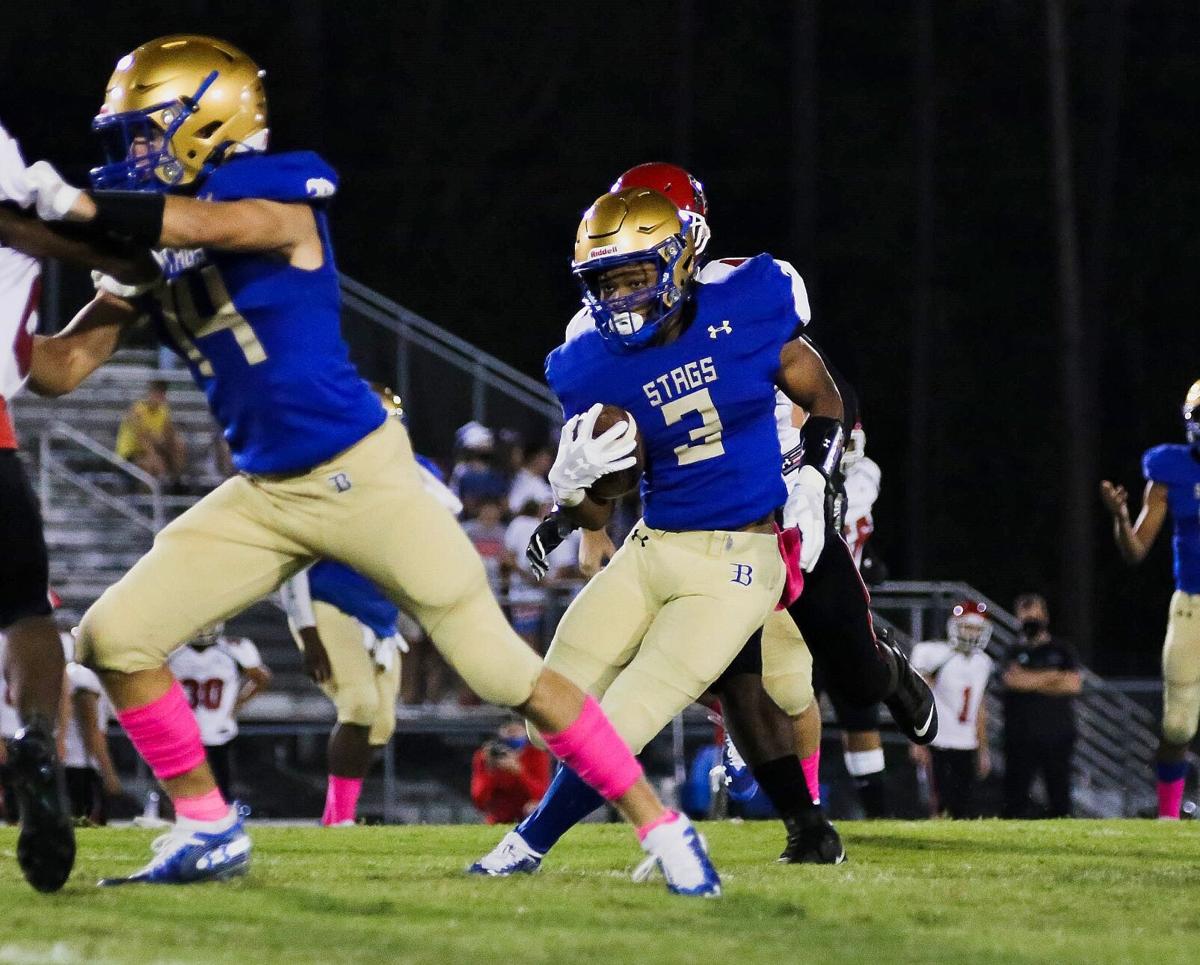 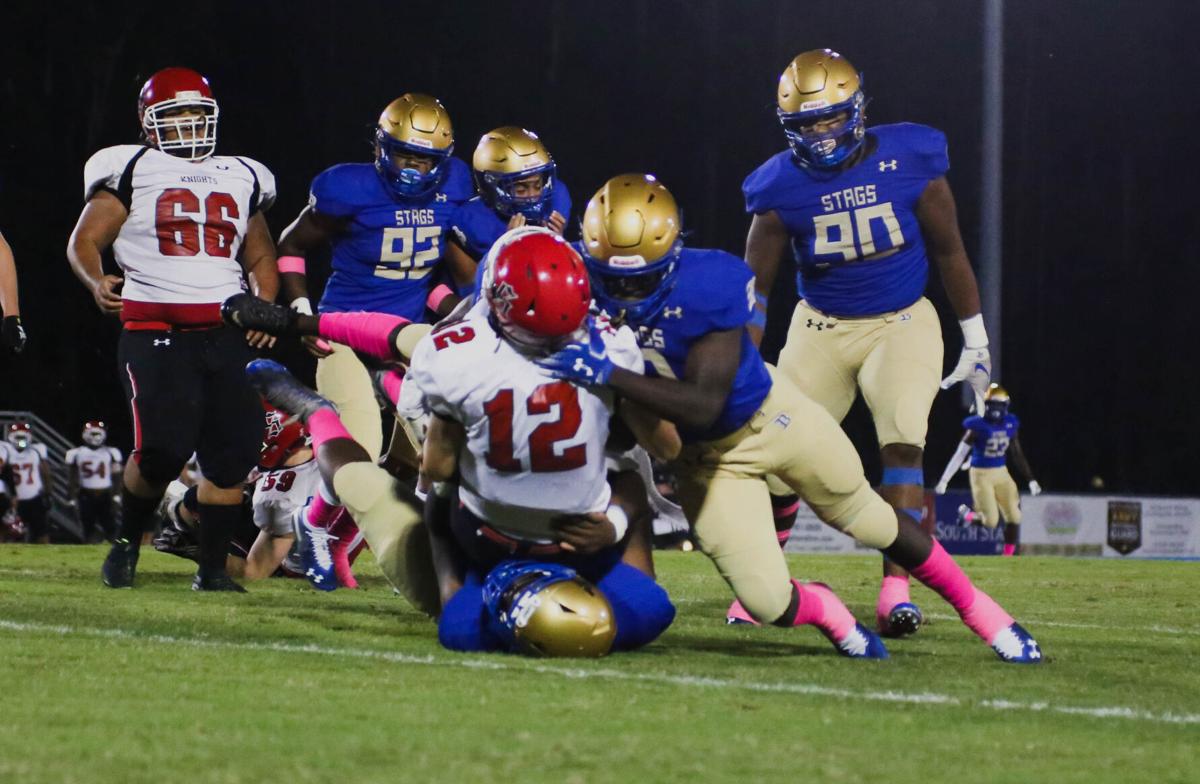 Berkeley’s defense records a tackle against Stratford on Friday. 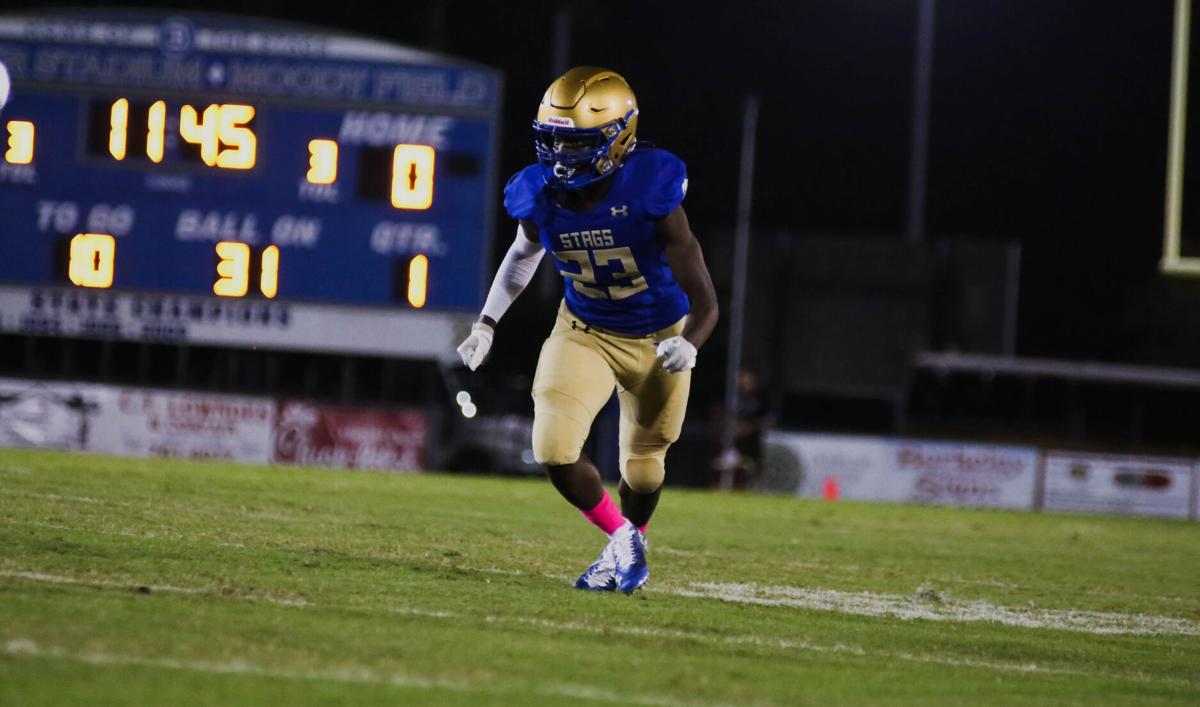 Berkeley defensive back Jay Washington keeps an eye on Stratford’s offense in the first quarter.

Berkeley’s defense records a tackle against Stratford on Friday.

Berkeley defensive back Jay Washington keeps an eye on Stratford’s offense in the first quarter.

The Berkeley Stags head into the final week of Region 7-AAAAA play in a must-win situation if they want to make the playoffs.

The Stags (3-1, 2-1 region) travel to Cane Bay (2-2, 1-2 region) on Friday and the winner punches a ticket to the postseason. The loser will play two or three more non-region games and pack the equipment away for another year.

The Stags are coming off a 34-27 victory over Stratford High School in Moncks Corner on Friday. Quarterback Trey Minor was 16 of 22 for 247 yards and three touchdowns while running back Luke Gadsden carried 19 times for 190 yards and a touchdown.

Berkeley rolled up 470 yards in winning for the third game in a row since opening with a 28-26 loss to Goose Creek.

“I’m really pleased with the balance offensively,” Berkeley coach Randy Robinson said. “When we can throw it and run effectively, we have a pretty good offense. We had some problems on defense. We let them convert some big plays and it got close there at the end but we found a way to win, and this team continues to improve each week.”

Stratford led 7-6 after a period and 14-13 late in the first half before Minor’s 20-yard touchdown pass to Kyle Gill put Berkeley on top, 20-14, at the half. Minor hooked up with Butler on a 25-yard touchdown pass with better than eight minutes left in the third period to put the Stags up 27-14.

Stratford closed within 27-20 but Berkeley made it a two-score game again with 5:21 left on Minor’s 1-yard run.

The Knights pulled within 34-27 in the final minute but couldn’t corral an onside kick to stay alive.

The Stags have won four straight against Cane Bay, including 47-7 last season.

Griffin Gore kicked a 25-yard field goal and Philip Simmons’ defense made it stand up for a 3-0 win over Timberland in Region 6-AA.

The Cavaliers (7-1) got a 1-yard touchdown run from quarterback Nai’Ryan Bookert to cut the deficit to 14-6 but the Rebels ran off 26 unanswered points to pull away.

Bookert passed for 219 yards and ran for 60 more for St. John’s Christian, which travels to Dorchester Academy on Friday.