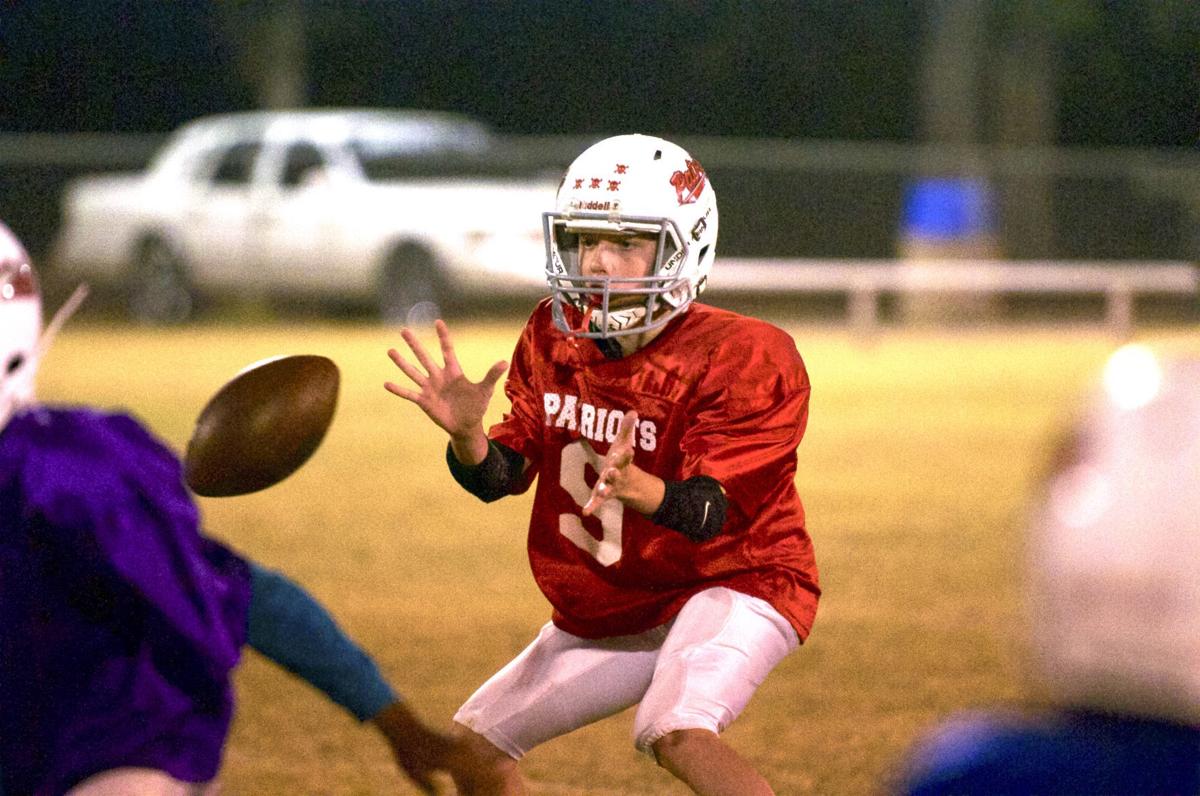 Mason Watson took over as quarterback for the Goose Creek Patriots of the small fry league on the third game of season. He lead the team to an 8-3 record heading into the playoffs. 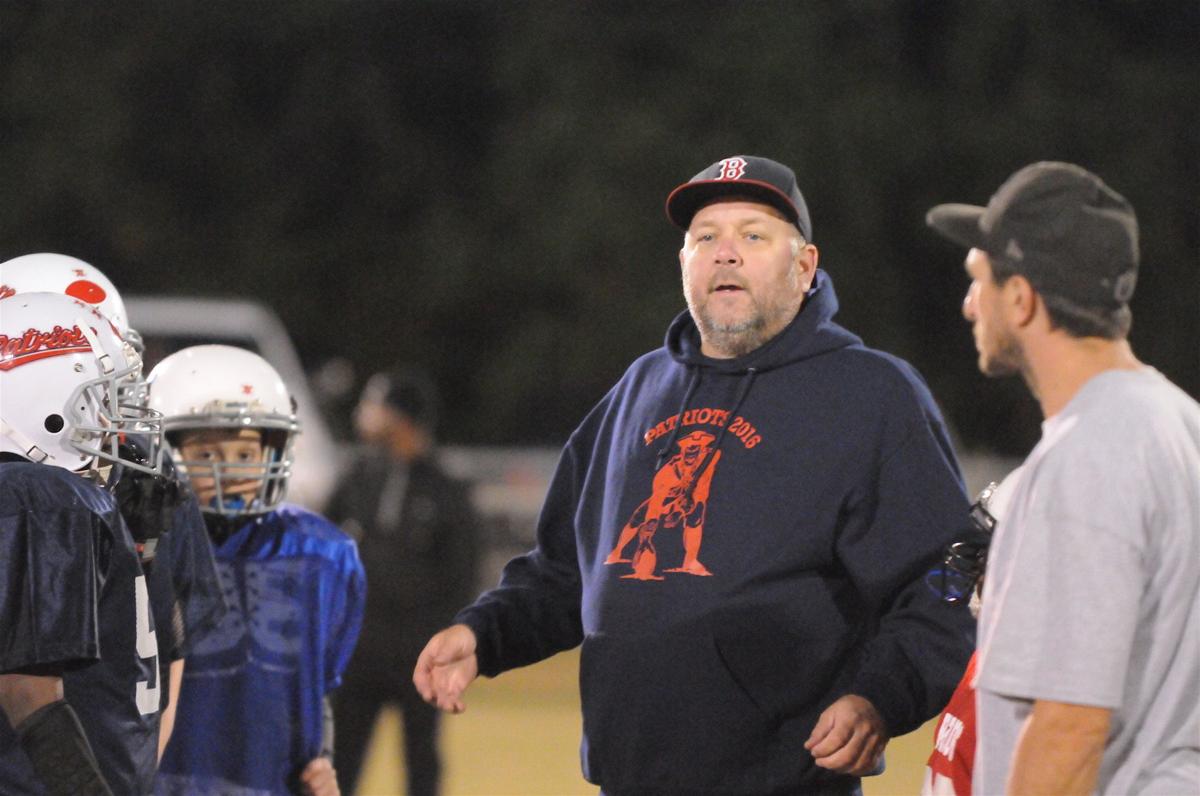 Ted Watson prepares his team at Dogwood Park for the playoffs that began Nov. 12.

Mason Watson took over as quarterback for the Goose Creek Patriots of the small fry league on the third game of season. He lead the team to an 8-3 record heading into the playoffs.

Ted Watson prepares his team at Dogwood Park for the playoffs that began Nov. 12.

It’s a chilly night under the football field lights at Dogwood Park in Goose Creek, as 12-year-old Mason Watson catches a snap from his offensive center.

“Hut,” he yells as he drops back a step or two.

He throws a pass that misses his intended his receiver and the offense regroups back at the line of scrimmage.

Watson attempts again to connect with a receiver through the air and the same outcome occurs. He does not get frustrated.

On the third play, instead of passing, he keeps it, dashing in between the defense up the field for nearly a 15-yard touchdown rush.

“There you go, Mason,” yells Offensive Coach Randy Jamison from the sideline. “That’s what you do.”

Ted Watson, coach of the Goose Creek Small Fry Patriots, was nervous about selecting his son Mason as quarterback after the first two quarterbacks went out due to medical reasons.

Mason currently has “high-functioning” autism, and is now leading a previously 0-2 team to an 8-3 winning season.

At seven years old, Mason was diagnosed with Pervasive Developmental Disorder-Not Otherwise Specified (PDD-NOS) after he expressed aggravation from hearing knives scrape against plates. His parents thought he might have been experiencing a migraine.

At the time, his diagnosis was one applied to those who were on the autism spectrum but did not fully meet the criteria for another autism spectrum disorder, such as Asperger syndrome, according to Autism Speaks’ website.

In 2013, the criteria for diagnosing autism changed. After another evaluation at the Medical University of South Carolina, Mason was diagnosed with “high-functioning” autism.

Symptoms for autism and their severity vary widely. Children with autism may engage in repetitive behaviors, such as rocking, jumping and twirling, arranging and rearranging objects.

They may also have difficulty communicating verbally and understanding emotional expressions, such as a smile or hug, and managing emotions can be challenging.

Mason’s parents did not identify anything Mason did early on as an indication of autism. They simply thought tendencies, such as organizing toy cars by color, were just “Mason being Mason.”

Although Mason has had past “meltdowns” at home, Michelle said he does pretty well with managing his emotions in public.

“The symptoms were there, we just never heard about it,” Ted said.

Those with autism can have difficulty interacting with other children in a social setting, but Mason has done well in playing alongside teammates in recreation football.

His parents attribute Mason’s comfort around the players and coaches to three years of building these relationships.

“I’m sure other teams have bonds and chemistry like this, but with ours, it’s really a lot tighter and I really think that’s what’s helping,” Ted said.

There is no one cause of autism. But researchers say most cases of autism appear to be caused by autism risk genes and environmental factors that influence early brain development. Advanced parental age at time of conception and difficulties during birth can combine with genetic predisposition to autism to increase risk, according to Autism Speaks.

Autism treatments can range from behavioral intervention, which includes therapeutic activities, as well as medicines.

Mason does not take any medication, but he has a heavy, 15-pound blanket that his mother made which feels like someone is hugging him.

He also received occupational therapy, where he was required to complete physical tasks.

“One of his goals in therapy was to be able to do ten jumping jacks in a row. That was a struggle for a while. But he worked really hard,” Michelle said.

Now, Michelle said Mason has gone from not being able to do ten jumping jacks to completing touchdowns as a quarterback.

In many instances, individuals with autism display exceptional academic achievement and other strengths.

Autism Speaks reports that 40 percent of those with autism have “average to above average intellectual abilities.”

Mason is in the Gifted and Talented Academic Program at Sedgefield Middle School where he recently qualified for the Duke University Talent Identification Program, a nonprofit that provides students who test exceptional well with resources to develop their creativity.

“He does everything as hard as a he can,” Michelle said.

“He just hyper focuses,” Ted added. “I really think that’s because of the autism.”

That focus translates on the football field. Mason began playing flag football at a young age, and moved up to tackle football a few years ago.

Ted recalled concerns he and his wife expressed when considering how Mason would react to being tackled.

“What’s getting hit going to do? How’s he going to react? It was a lot of breath holding the first year,” he said.

But so far, Mason’s done well, and was called this season to be the quarterback of a team that lost its first two quarterbacks due to injuries and medical reasons.

At first, both Mason and his father were reluctant. Mason simply did not want to do it and his father was not sure if he could even efficiently throw a football, as Mason was primarily a defensive player.

But Mason’s younger brother, Connor, who also plays on the team, along with offensive coach of the Patriots, Randy Jamison, knew Mason was the right pick based on his athleticism and at-home, in-the-yard play.

The Patriots, who started the season 0-2, went 7-1 after Mason took over at quarterback. They began the season playoffs on Nov. 12.

Ted and Mason have learned to communicate on the field, both as father and son and as coach and player.

“He’s a coach’s dream, he does whatever you tell him.” Ted said. But he added, “If he thinks the play has been run too much and [the defense] starts keying on it, he’ll tell me from the sideline. He’ll look at me and literally tell me ‘don’t run that play again.”

Mason’s teammates, some who are longtime friends and are considered additional members to the Watson household, are proud to see him excel.

“I was kind of surprised. Mason is a defensive player and he’s never really played offense. So him coming up to QB and winning us some games is actually kind of impressive,” said teammate and friend Robert, also known as “Budda.” “I’m proud of him.”

As a coach, Ted tries to focus on the team’s overall direction. And as much as he tries to conceal his excitement when Mason shines on the field, Ted admits he has a “dad moment” every now and then.

“This past weekend when Mason ran off, the second play he took it 55 yards to the house…I wanted to put my hands up and gloat a little bit,” Ted said.

“I’m just watching him straight down the sideline and I’m going ‘there you go, there you go.’ You get a couple of dad moments like that.”