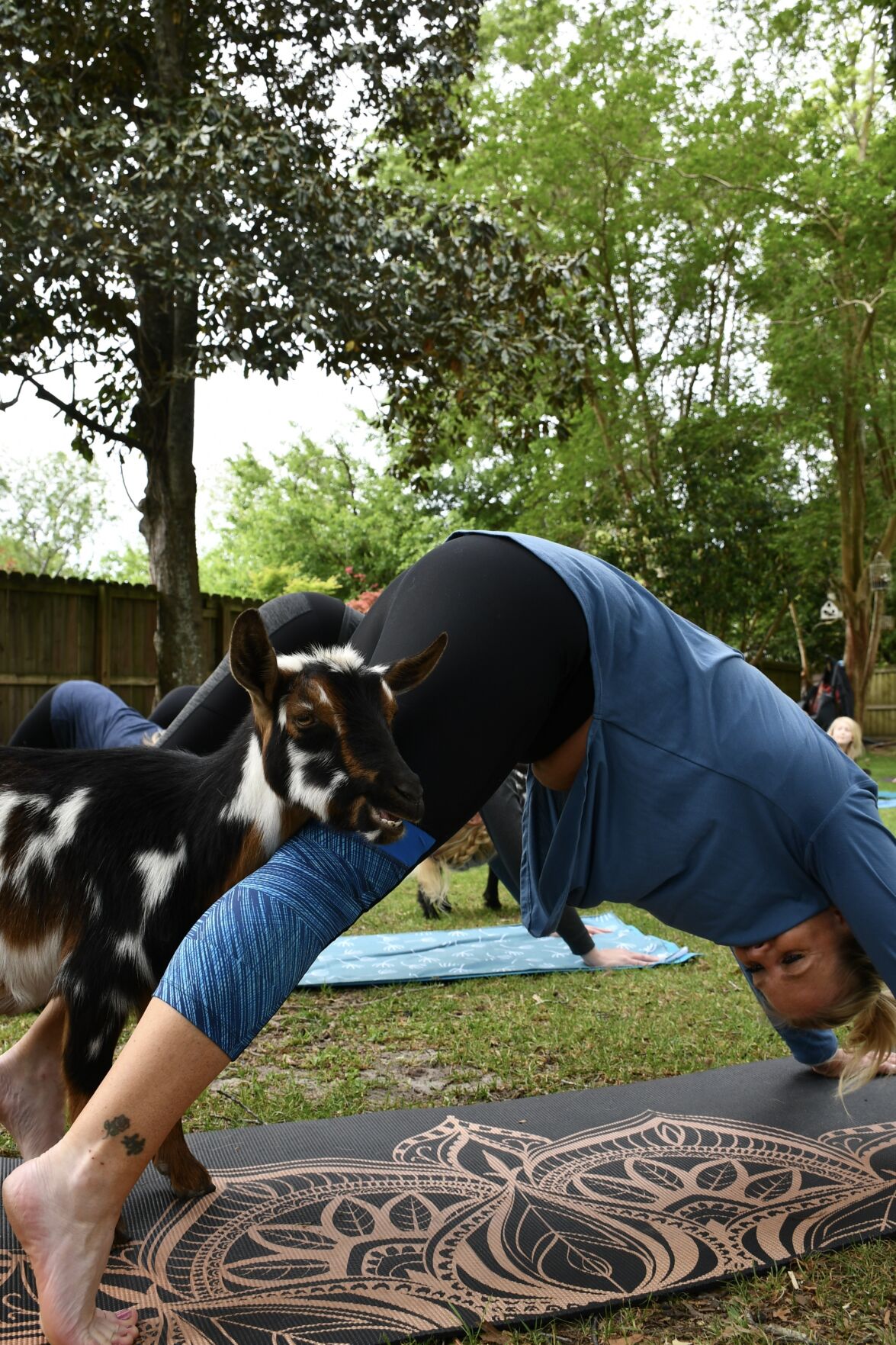 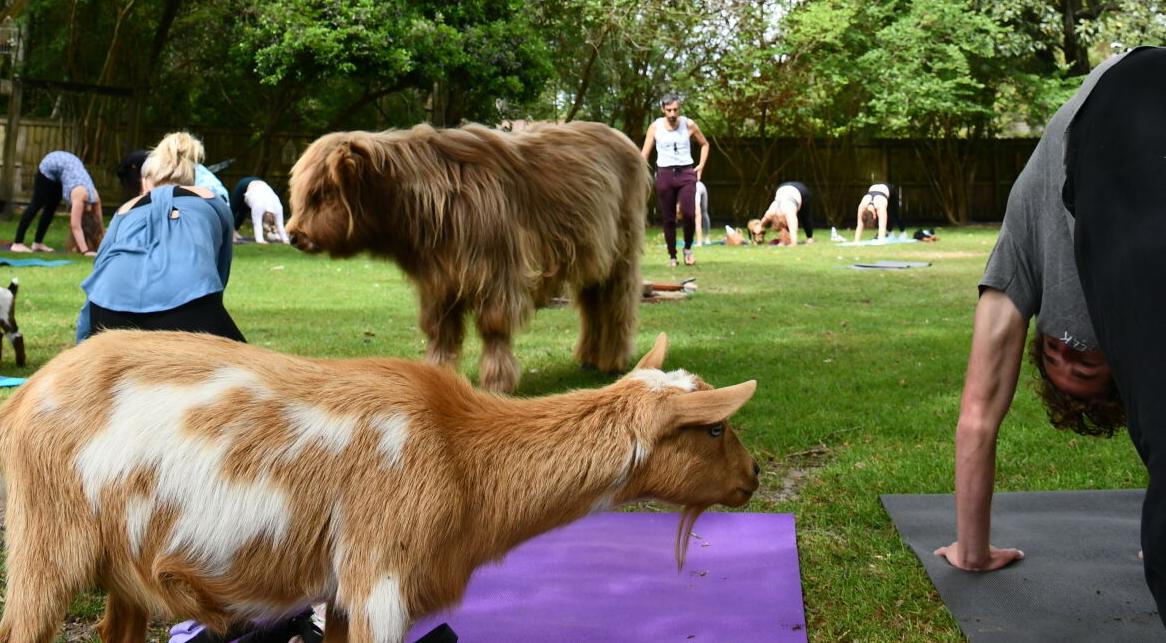 After each goat yoga session, participants are presented with the opportunity to have a goat crawl onto their backs for a popular photo op. 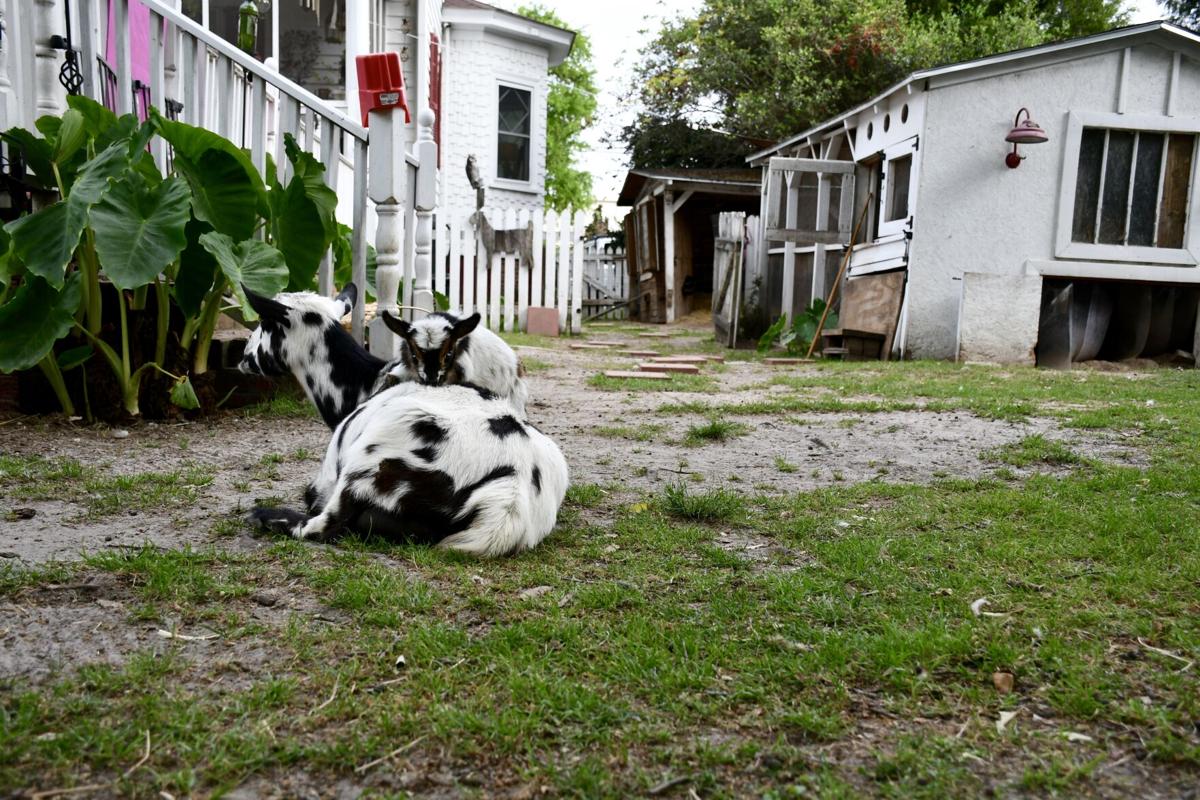 The kids are still very reliant on their mothers and spend much of the day tagging alongside them. 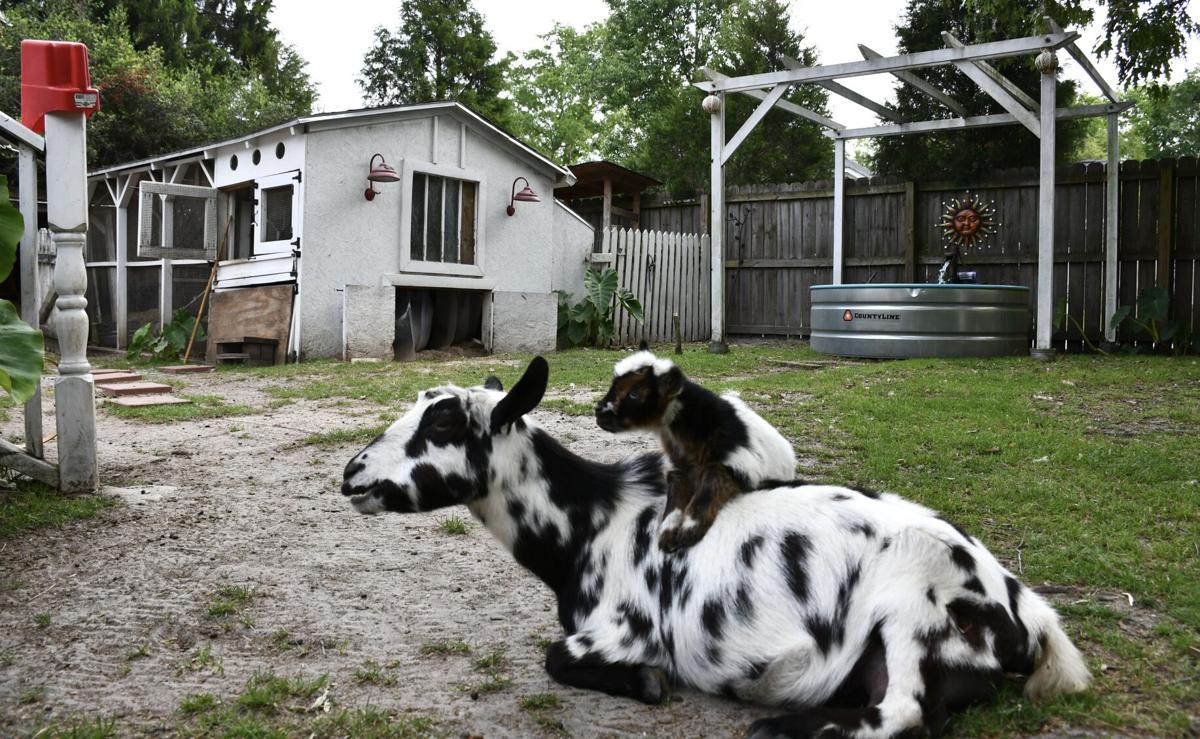 At Flowertown Charm, Jennifer and Chris Pelayo handled each goats birth and payed close attention to the mothers in the time leading up to their birth. 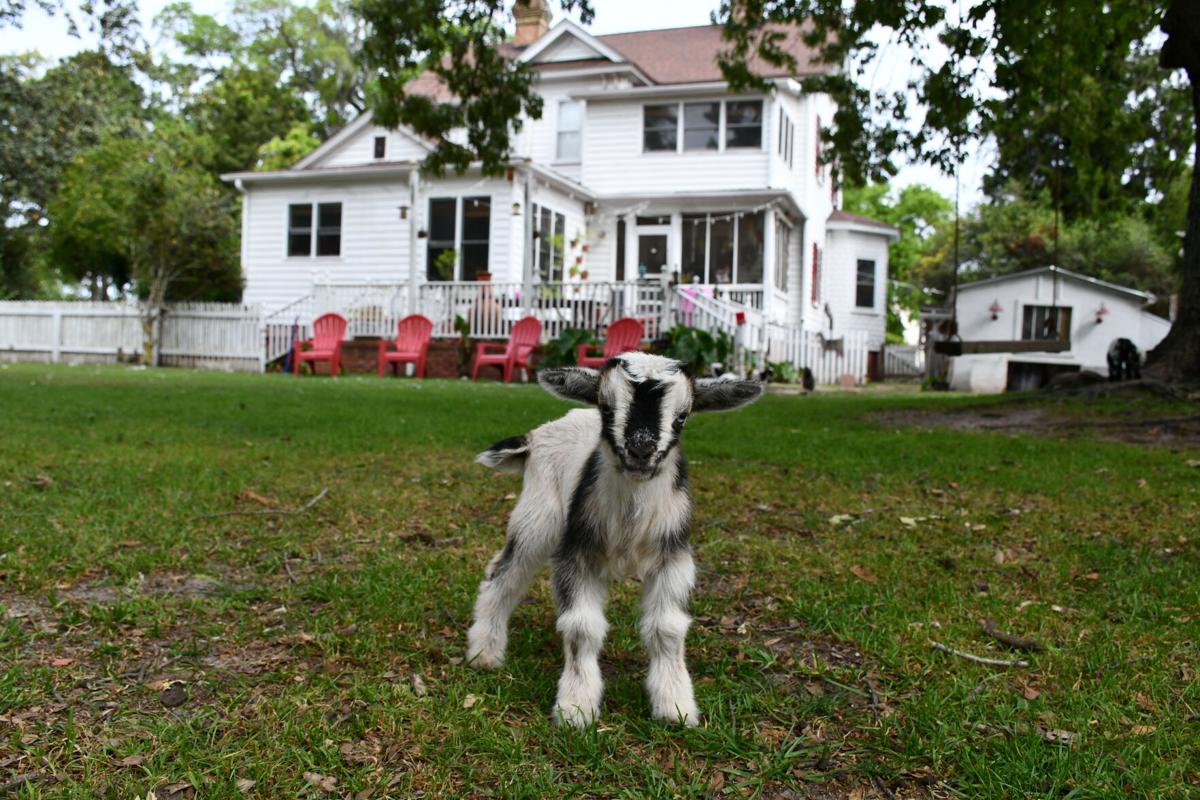 The kids enjoy roaming throughout the farm yard and playing with visitors during snuggle sessions and yoga classes.

After each goat yoga session, participants are presented with the opportunity to have a goat crawl onto their backs for a popular photo op.

The kids are still very reliant on their mothers and spend much of the day tagging alongside them.

At Flowertown Charm, Jennifer and Chris Pelayo handled each goats birth and payed close attention to the mothers in the time leading up to their birth.

The kids enjoy roaming throughout the farm yard and playing with visitors during snuggle sessions and yoga classes.

Flowertown Charm has offered goat yoga classes for the past several years, selling out most Saturday mornings, but it was only a handful of weeks ago that they welcomed five new baby goats to the farm. Jennifer and Chris Pelayo, founders of Flowertown Charm, handled all of the birthing themselves.

Over the course of the last few weeks, Magnolia, Lily and Camellia, all of whom recently became new moms, gave birth to a total of five kids. Jennifer Pelayo says that so far, the new moms are doing a great job and the couple loves having the baby goats on the farm.

Although there are now five undeniably cute kids with rare blue eyes roaming the farm, the birthing process wasn't easy. Lily, one of the smaller goats, had a traumatic birthing experience.

Pelayo says that goats have a gestation period of about five months, so when they knew it was getting closer to their births, the couple would listen out for any noise coming from a baby monitor set up in the barn.

“My husband and I do all of the birthing ourselves and we just kind of have a baby monitor in the barn and at night we look out for hearing a screaming goat in the backyard,” Pelayo said.

This time around, Lily had a difficult birthing experience that needed a lot of assistance from the Pelayo’s.

“The mom and the baby almost didn't make it. So we really had to step in with that one,” Pelayo said.

The couple first began bringing animals on the farm about five years ago. Originally, they had only two goats but over the years, more and more animals have come.

Besides the goats, there are many animals that roam the farm including two mini-Scotish Highland cows, three pigs and an African Sulcata tortoise, named Tank, and lots of chickens. Pelayo, who grew up alongside Tank in Hawaii, says the nearly 130-pound 32-year-old tortoise only comes out of its shelter to visit with guests when it's warm and sunny outside.

“We are from Hawaii originally and we shipped him out here about a year and a half ago,” Pelayo said.

Behind the yard where yoga takes place is about four acres of land that the couple rents. For over a century, these pastures have served as agricultural land and when they first began renting the property the couple decided to continue the tradition.

The couple found a love for fixing up houses and other DIY projects which ultimately led to their decision to buy the historic fixer upper, located in Summerville, they have now, where guests can also stay at through Airbnb.

“We lived in Arizona for a few years. During the housing crash we bought investment homes and we found out we love fixing up and renovating. We were wanting to move and we wanted somewhere that had an old house, we wanted to take on a historic fixer upper,” Pelayo said. “We found this house, fell in love with it and we've been fixing it up for about six and a half years now. It was not livable when we bought it.”

Summerville has grown a lot since they originally moved to the area, Pelayo says, and that growth is evident from their farm. Right outside of the fenced in land, new housing developments have sprouted in the last few years which emphasizes the growing sense of an urban farm that they have created.

“Summerville has just grown up around the house and we've watched all of these homes get built in the last three years so we've watched the growth kind of happen around us too.”

Pelayo says that it has been nearly three years since they first began hosting goat yoga classes, which shortly after, she began having people ask if they could just come over for farm tours. Now, they also offer “goat snuggle sessions,” where you can come and play with the animals for an hour or so.

Joseph Vinciguerra, who instructs yoga at several locations including a studio just down the road from the farm, Healing Hara, has led the goat yoga classes since the farm first kicked off the sessions.

“Jenna kind of contacted the place and was like ‘hey is there a yoga teacher around who would be interested in doing goat yoga?’ so it was kind of just a moment that we were just like hey you've got goats, I've got the yoga, let's bring the two together,” Vinciguerra said.

When COVID-19 hit, the farm stopped classes for several months. But when guidelines allowed for them to begin again, they slowly started holding more classes with smaller sizes. Pelayo says the farm began offering private sessions during this time, so that families could come and have an intimate session without worrying about social distancing. Being an outdoors and socially distanced event already, Vinciguerra says, getting classes started back safely was ultimately easier to do then many other businesses.

“I think just the yoga world now is transitioning, either online or outdoors, so it was pretty cool getting to do exactly what we were doing before. In a big circle we are all safe. Its been awesome being able to keep that going,” Vinciguerra said.

For Vinciguerra, yoga has been even more important throughout the ongoing pandemic.

“Like even for me, yoga has been this really great tool to use when I need to tap into my yoga practice and be mindful. It's just so important now, more than ever,” Vinciguerra said.

Mental health, Vinciguerra says, is the number one benefit that yoga can provide for others, especially during this time. Knowing how to control your emotions, use your breath and being mindful are all benefits that the practice can provide.

“Mindfulness is huge right now and that word changes. The definition of mindfulness I think can change a lot throughout the years, but it's always about being present, staying in the moment and being aware. So obviously the world can be crazy sometimes, as it is now, but being mindful and paying attention to your breath and all these emotions coming through is really beneficial,” Vinciguerra said.

Although the goat yoga classes may involve many distractions, especially with the five new kids ready to play, mindfulness is still heavily incorporated into the sessions. Classes cost $24.50 and are held at 10:30 a.m.every Saturday morning. More information can be found on the Flowertown Charm website.