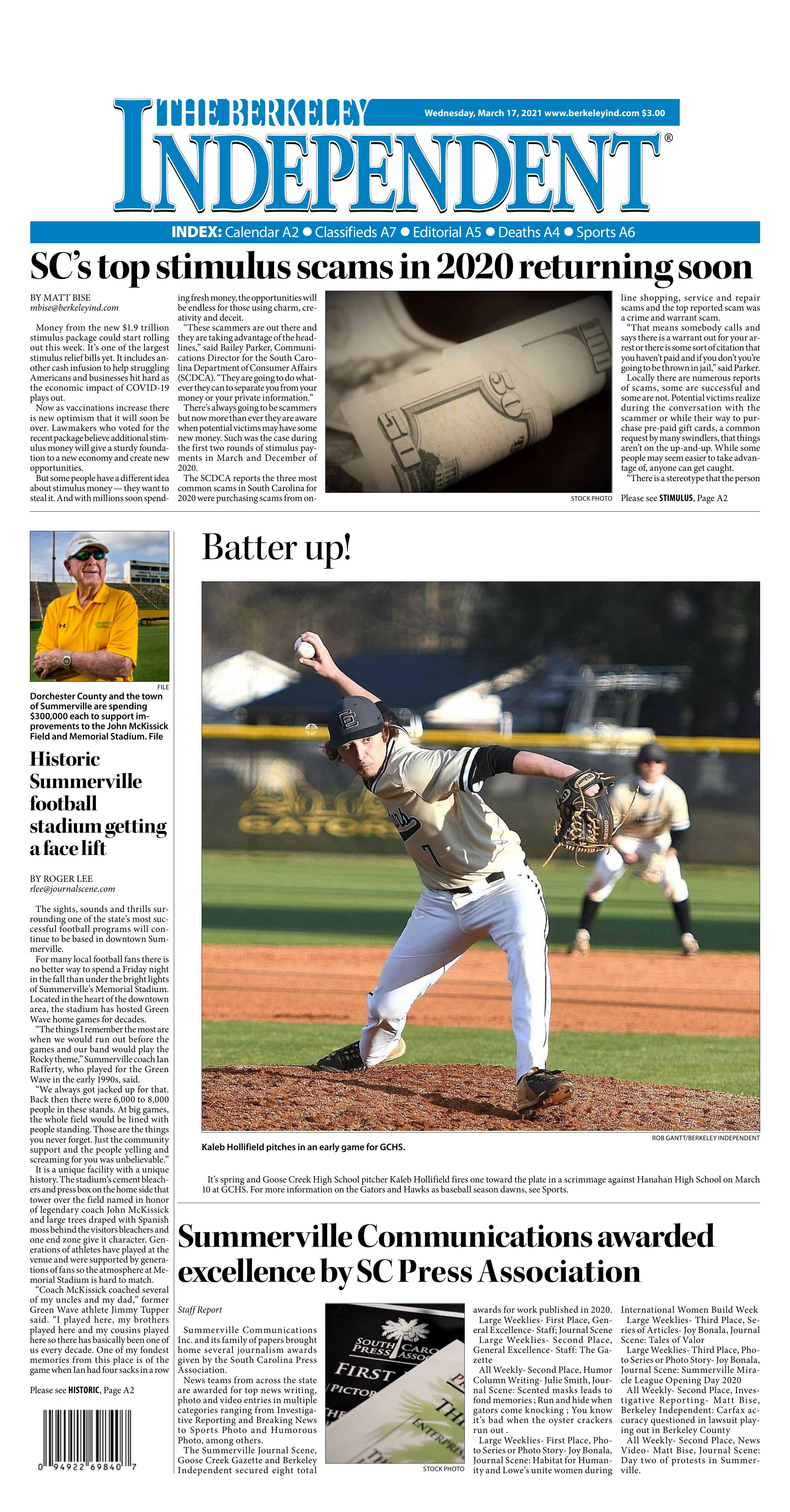 Money from the new $1.9 trillion stimulus package could start rolling out this week. It’s one of the largest stimulus relief bills yet. It includes another cash infusion to help struggling Americans and businesses hit hard as the economic impact of COVID-19 plays out.

Now as vaccinations increase there is new optimism that it will soon be over. Lawmakers who voted for the recent package believe additional stimulus money will give a sturdy foundation to a new economy and create new opportunities.

But some people have a different idea about stimulus money — they want to steal it. And with millions soon spending fresh money, the opportunities will be endless for those using charm, creativity and deceit.

“These scammers are out there and they are taking advantage of the headlines,” said Bailey Parker, Communications Director for the South Carolina Department of Consumer Affairs (SCDCA). “They are going to do whatever they can to separate you from your money or your private information.”

There’s always going to be scammers but now more than ever they are aware when potential victims may have some new money. Such was the case during the first two rounds of stimulus payments in March and December of 2020.

The SCDCA reports the three most common scams in South Carolina for 2020 were purchasing scams from online shopping, service and repair scams and the top reported scam was a crime and warrant scam.

“That means somebody calls and says there is a warrant out for your arrest or there is some sort of citation that you haven’t paid and if you don’t you’re going to be thrown in jail,” said Parker.

Locally there are numerous reports of scams, some are successful and some are not. Potential victims realize during the conversation with the scammer or while their way to purchase pre-paid gift cards, a common request by many swindlers, that things aren’t on the up-and-up. While some people may seem easier to take advantage of, anyone can get caught.

Parker added that national numbers show younger adults are the ones getting scammed most often. And the main two reasons victims are swept up in the scam are by either a scare tactic or by being told they would receive a reward. Victims will then play a risk and reward game their head.

Additional words of warning from the SCDCA are to do your best not to use a debit card online. Unlike credit cards and gift cards a debit card goes directly to your bank account. Hackers may find a way to get into your account and drain your cash. And if an unknown individual tries to contact you, out of nowhere, be it through an email, a phone call or social media, it is considered the number one red flag that a scammer is prowling.

Kaleb Hollifield pitches in an early game for GCHS.

It’s spring and Goose Creek High School pitcher Kaleb Hollifield fires one toward the plate in a scrimmage against Hanahan High School on March 10 at GCHS. For more information on the Gators and Hawks as baseball season dawns, see Sports.

Summerville Communications Inc. and its family of papers brought home several journalism awards given by the South Carolina Press Association.

News teams from across the state are awarded for top news writing, photo and video entries in multiple categories ranging from Investigative Reporting and Breaking News to Sports Photo and Humorous Photo, among others.

Dorchester County and the town of Summerville are spending $300,000 each to support improvements to the John McKissick Field and Memorial Stadium.

Renovations to McKissick Field at Summerville’s Memorial Stadium have begun.

The sights, sounds and thrills surrounding one of the state’s most successful football programs will continue to be based in downtown Summerville.

For many local football fans there is no better way to spend a Friday night in the fall than under the bright lights of Summerville’s Memorial Stadium. Located in the heart of the downtown area, the stadium has hosted Green Wave home games for decades.

“The things I remember the most are when we would run out before the games and our band would play the Rocky theme,” Summerville coach Ian Rafferty, who played for the Green Wave in the early 1990s, said.

“We always got jacked up for that. Back then there were 6,000 to 8,000 people in these stands. At big games, the whole field would be lined with people standing. Those are the things you never forget. Just the community support and the people yelling and screaming for you was unbelievable.”

It is a unique facility with a unique history. The stadium’s cement bleachers and press box on the home side that tower over the field named in honor of legendary coach John McKissick and large trees draped with Spanish moss behind the visitors bleachers and one end zone give it character. Generations of athletes have played at the venue and were supported by generations of fans so the atmosphere at Memorial Stadium is hard to match.

“Coach McKissick coached several of my uncles and my dad,” former Green Wave athlete Jimmy Tupper said. “I played here, my brothers played here and my cousins played here so there has basically been one of us every decade. One of my fondest memories from this place is of the game when Ian had four sacks in a row against Stall. He was the opposite defensive end from me my senior year and I didn’t get any but he got four in one series.”

Today Tupper is one of the leaders of a group of business owners that have joined forces with Dorchester School District Two, the Town of Summerville and Dorchester County on a renovation project for Memorial Stadium and McKissick Field that should ensure they will remain the hub of Friday-night action for some time.

The ground-breaking ceremony for the renovation project was on March 10. Officials are expecting the work to be done in time for Summerville’s first football game this fall.

“In the end we should have the best facility in the state,” Tupper said. “I remodel historic homes for a living so I like mixing the old with the new. We will have the old history of Summerville with the stadium and the giant oak tree everybody knows and then we are going to have the new lights, new speaker system and the turf for all the kids to enjoy. Everybody is going to want to play here.”

Plans also call for the venue to be used for things other than football. Officials with the town and county said it would be ideal for hosting concerts and could open up new possibilities for those planning the annual Flowertown Festival.

“We are so fortunate to be a little bit different from other places across South Carolina,” Mayor Ricky Waring said. “We are lucky to have a football field in the heart of Summerville that is named after John McKissick, the winningest coach in the world. Now we can open it up for all kind of things.”

The artificial turf that will be installed as part of the renovations will have multiple benefits.

“We will have one of the best playing surfaces in the state,” Rafferty said. “When it pours down rain we don’t have to worry about it. The only thing that is going to stop us is lighting. Knowing we can jump on a bus and bring practice over here is good because it means we won’t have to slop around in the mud and worry about getting our kids injured. Plus I’m big on speed. With that carpet we should be a fast team.”

Since wear and tear isn’t as much of a concern with artificial turf, the renovations open up opportunities for the school to host events for its drama, chorus and music departments at the stadium and to expand events already hosted there such as the Gus Moody Memorial Tournament of Bands.

“Beyond football, we will move soccer back to this stadium,” Summerville Athletic Director Biron Rutherford said. “By moving the fence and (walkway) back we will be able to have the width you need for a soccer field. When we had soccer here the students really enjoyed rooting for the team. Our track field just doesn’t offer the same experience for the fans and the players that we can offer here.”

When complete, the project should ensure athletes, parents and fans alike will continue to have fond memories from Memorial Stadium.

“Probably my best memory from here is from when I was an assistant principal for the high school,” Rutherford said. “I was sitting on the front row when Summerville played Gaffney in the playoffs. We were behind early but then A.J. Green made a great catch that took the momentum from Gaffney. From then on all they could do is watch A.J. do his thing. That is probably the most excited I’ve ever been at a football game. We went on to play for the state championship that year.”