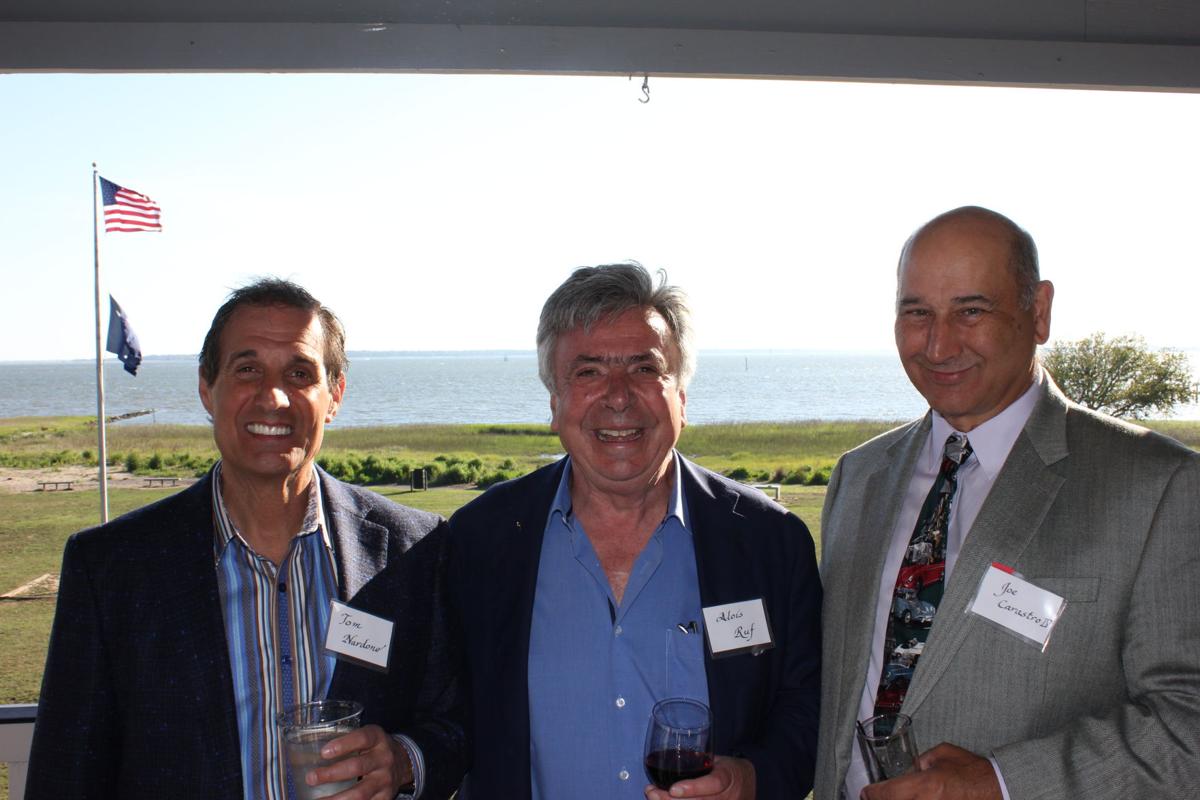 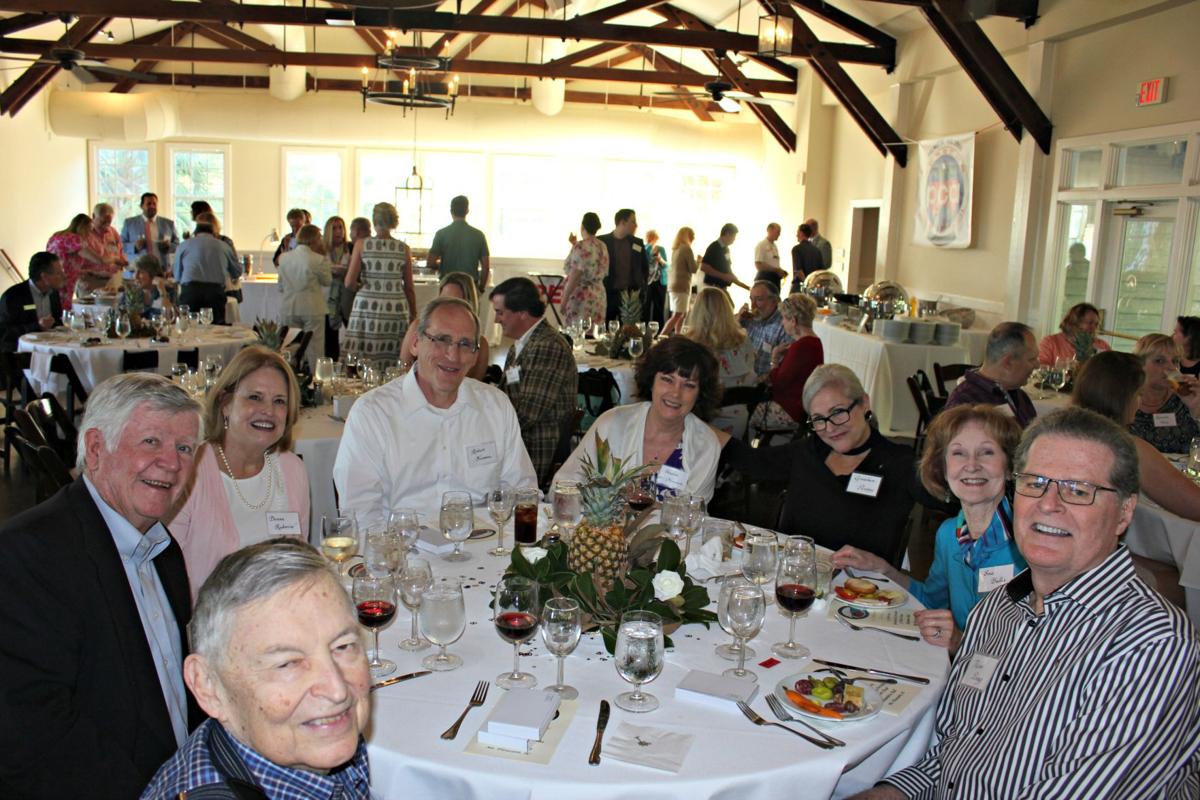 PCA members celebrate with a social hour at the clubhouse at Alhambra Hall in the Old Village of Mount Pleasant. Photo/Jeff Surette. 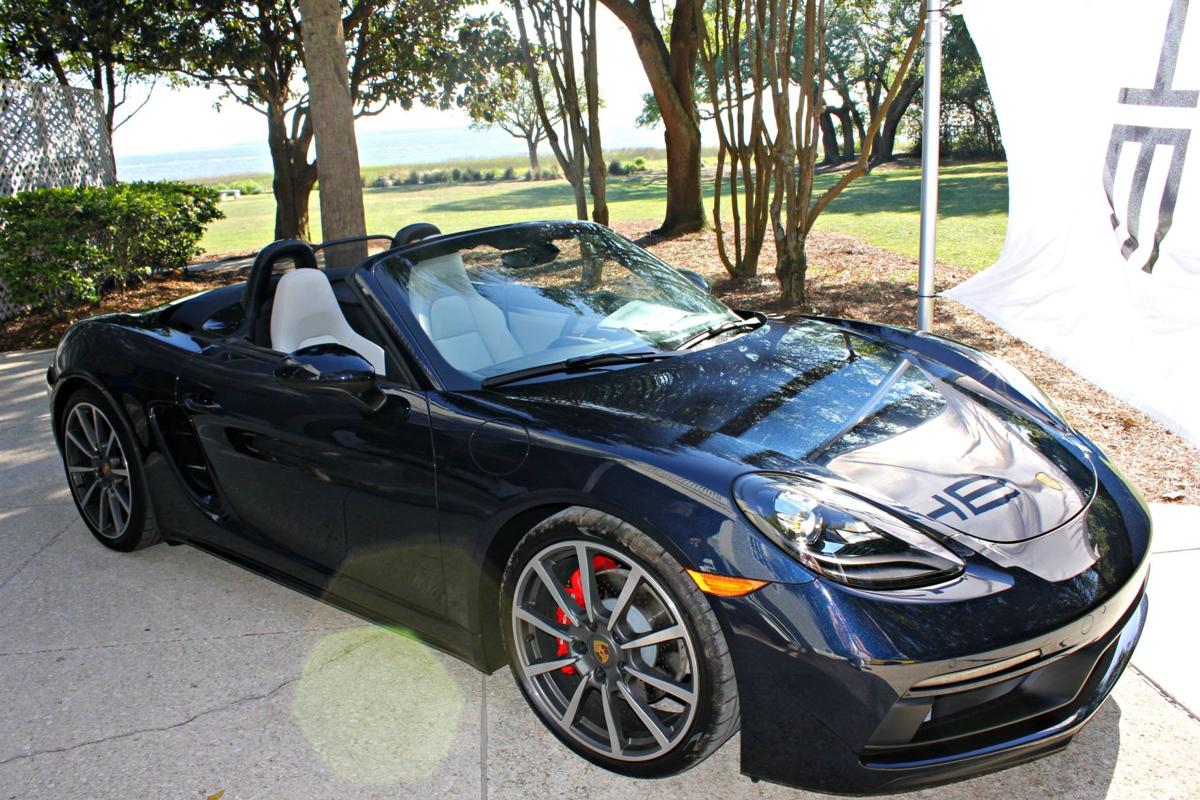 The Porsche Boxster from Porsche of Hilton Head. Photo/Jeff Surette. 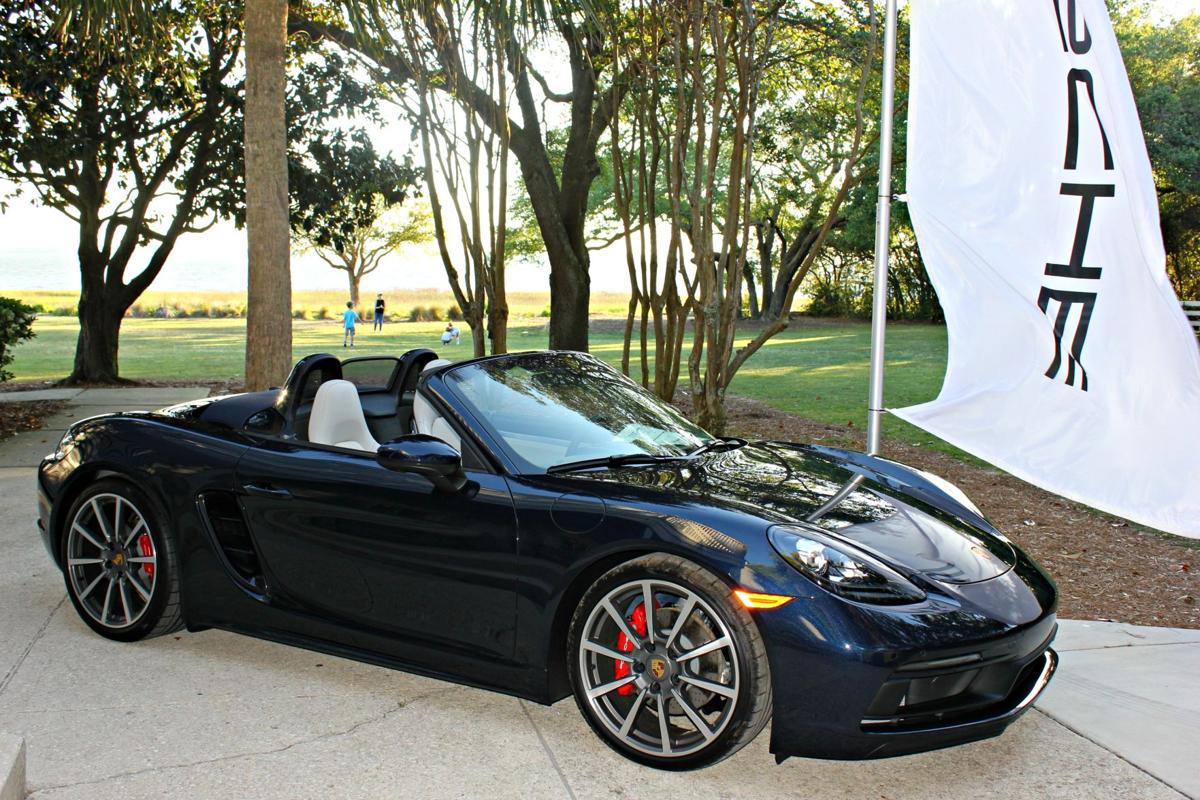 The sleek design of the Porsche Boxster is unmistakable -- from Porsche of Hilton Head. Photo/Jeff Surette. 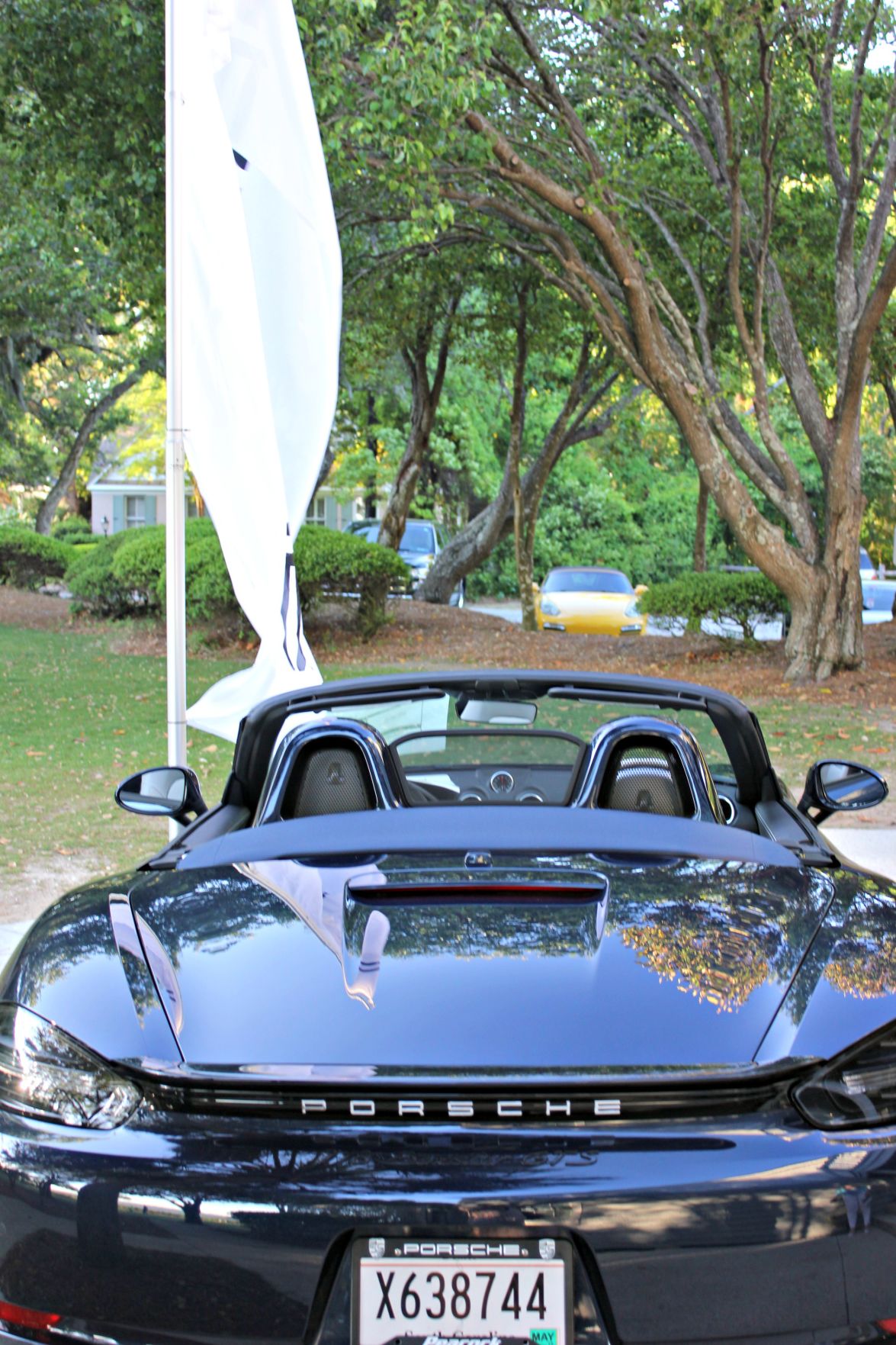 Sleek and beautiful -- the Porsche Boxster from Porsche of Hilton Head. Photo/Jeff Surette. 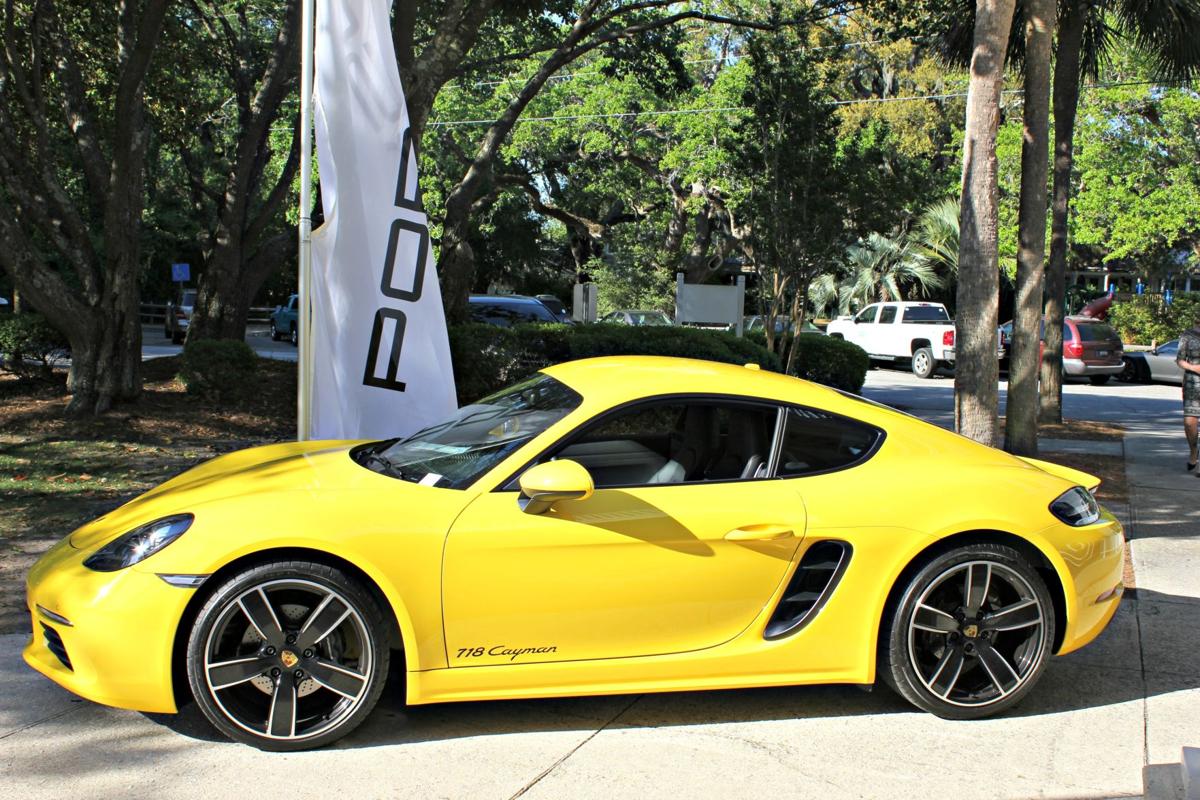 A Porsche Cayman from Porsche of Hilton Head. Photo/Jeff Surette 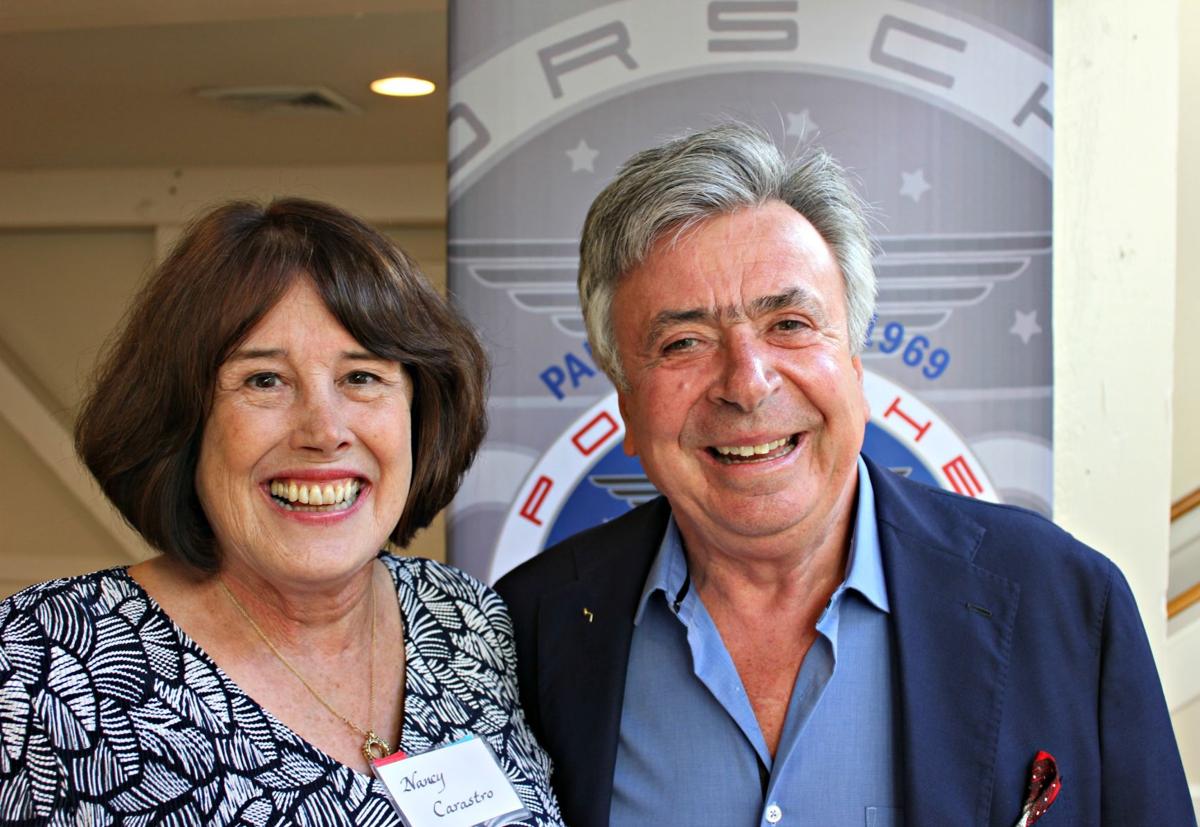 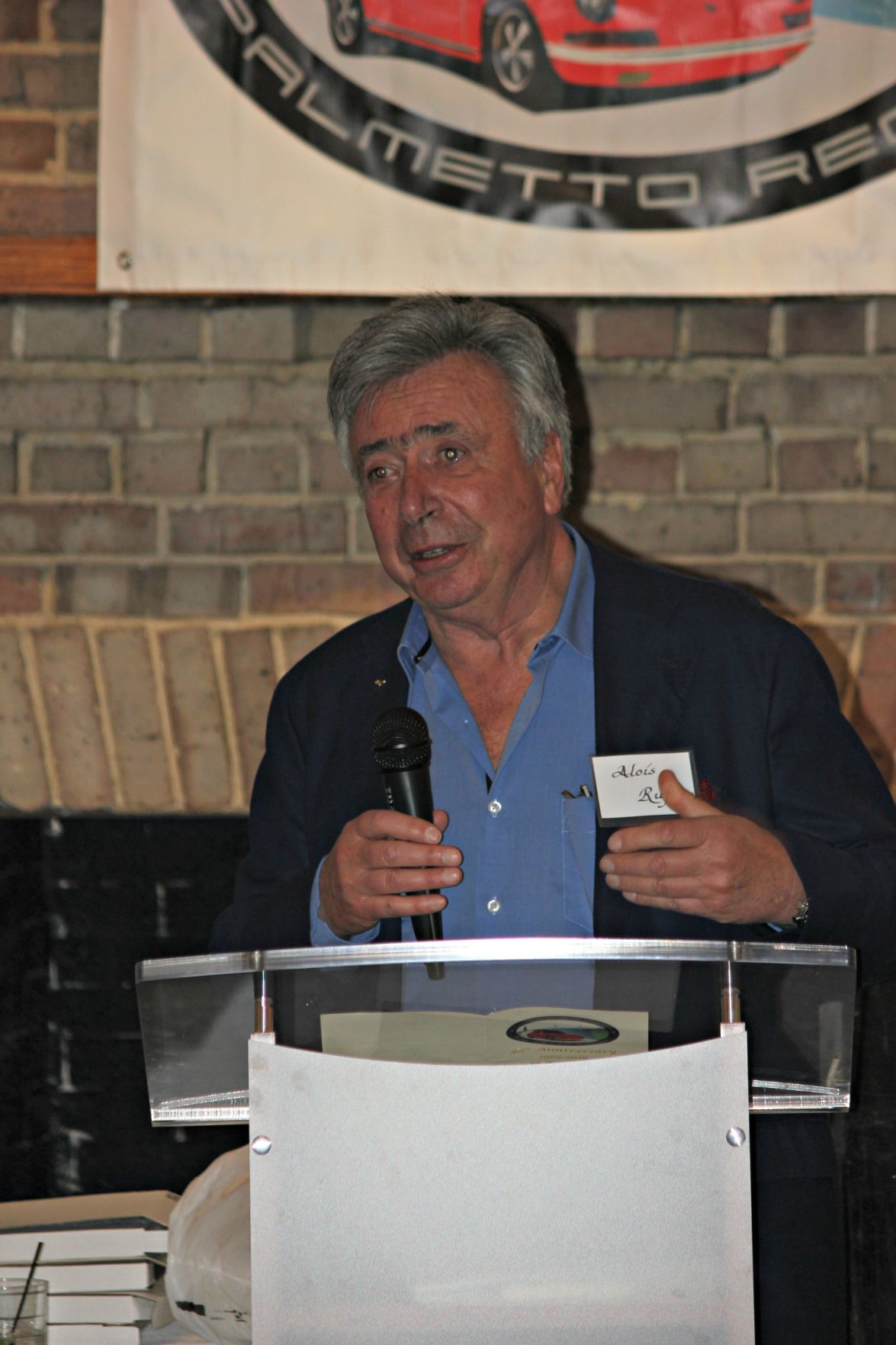 Alois Ruf speaks to the PCA members, sharing memories and experiences of his business and how Porsche Clubs of America are an integral part of the brand. Photo/Jeff Surette. 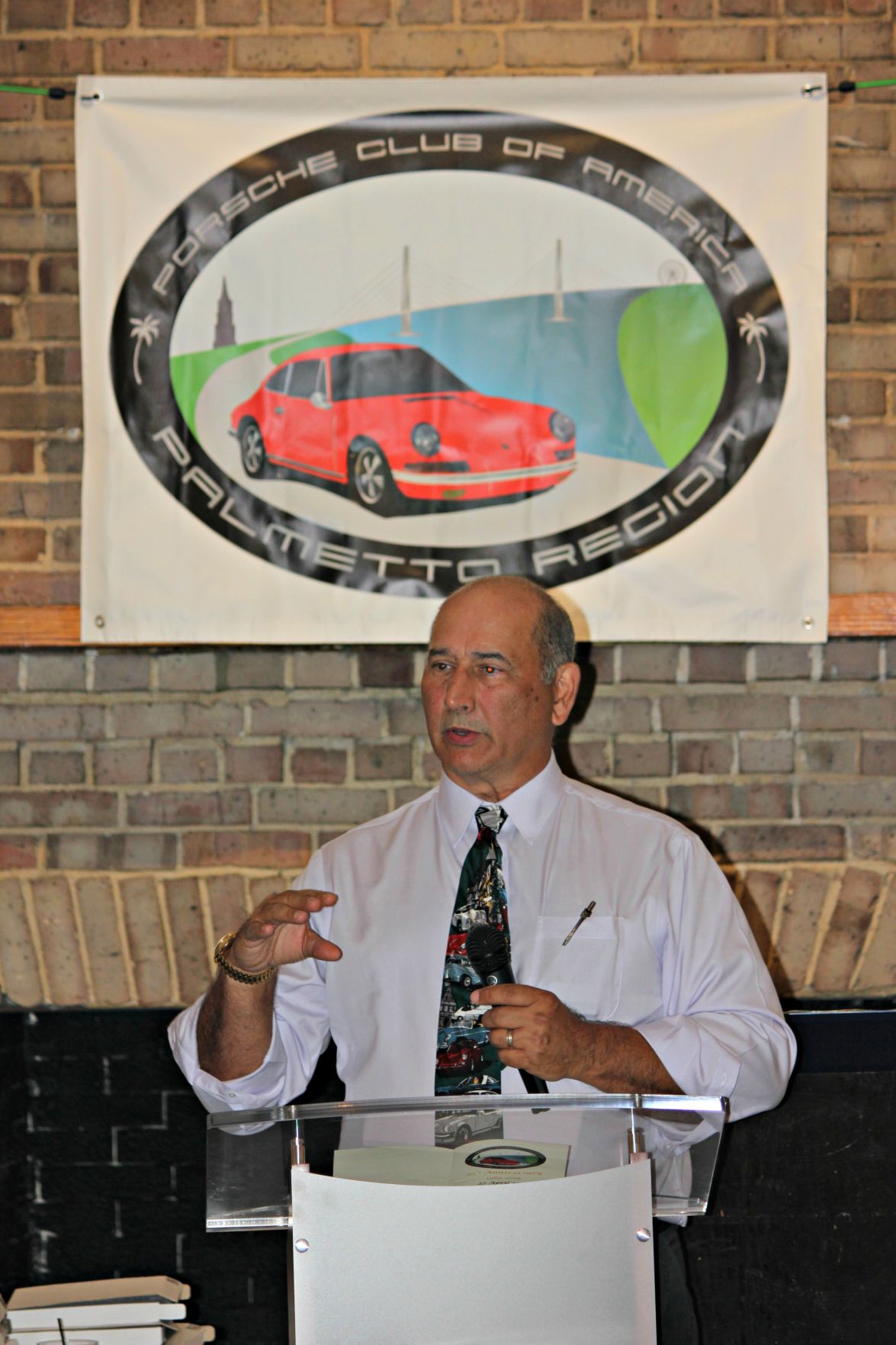 PCA members celebrate with a social hour at the clubhouse at Alhambra Hall in the Old Village of Mount Pleasant. Photo/Jeff Surette.

The Porsche Boxster from Porsche of Hilton Head. Photo/Jeff Surette.

The sleek design of the Porsche Boxster is unmistakable -- from Porsche of Hilton Head. Photo/Jeff Surette.

Sleek and beautiful -- the Porsche Boxster from Porsche of Hilton Head. Photo/Jeff Surette.

A Porsche Cayman from Porsche of Hilton Head. Photo/Jeff Surette

Alois Ruf speaks to the PCA members, sharing memories and experiences of his business and how Porsche Clubs of America are an integral part of the brand. Photo/Jeff Surette.

The evening was nearly as spectacular as the cars it celebrated.

If you’ve read any of my past columns, you may already know that Porsche is one of favorite autos – ever – of all time. I had the pleasure of attending a local Porsche celebratory event.

The Palmetto Region of Porsche Clubs of America (PCA) had a gala banquet and event at Alhambra Hall in the Old Village in Mount Pleasant this past weekend. Porsche of Hilton Head sponsored the celebration.

What began with 15 members in 1969 has blossomed into a 300 plus roster of passionate Porsche owners. In 2006, the club was in the top five nationally. The PCA includes members from Charleston, Berkeley, Colleton, Dorchester, Georgetown, Williamsburg, Dillon, Hampton, Horry, Marion and Marlboro counties.

“Our club, the PCA is a very active and passionate club,” said Club President Joe Carastro.” We are thrilled at the participation and that so many members are here.”

Those members included Porsche owners from outside the Palmetto region as well – Pennsylvania, North Carolina, Tampa and even Capetown, South Africa.

Before the banquet, a silent auction of the late“Tuggy” Mathinson, artist and president of the club in 1981 was on display. His son, Rhett was presented with a framed piece of his father’s legacy by Carastro during the introductory remarks.

A significant history and special guest

Alois Ruf (pronounced “Roof”) of German automotive manufacturer, RUF, was the guest speaker. Ruf is legendary for his contribution in Porsche history of the “Yellowbird,” or the RUF CTR, introduced in 1987 in Germany at a “Road and Track” test drive event. Ruf pared down a late-model Porsche 911 in his garage in Germany and put in twin turbochargers. The car beat out the competition — Ferraris, Lamborghinis, Bugattis and the rest– at the track that day. The Yellowbird was born, and so was a legend.

The Yellowbird was named for its bright yellow color. The color was chosen because during that time (in 1987) there weren’t any photo enhancements to “bring out” the color of a car in magazines, Ruf said.

“We were going to paint the car red,” said Ruf. “Then we decided to paint our car blossom yellow – a color that was popular in the 70s. This is how it came about. We built 29 of the cars and there are 80 million of them in computer games. Now this generation is being introduced to them (Porsche) and they are becoming customers.”

In 2017, the RUF CTR was introduced, its design inspired by the original car that RUF manufactured. It has twin turbos and top speeds over 223 mph. It was and is one of the most beloved European cars in the history of automobiles. One of the original Yellowbirds, A 1989 RUF CTR “Yellow Bird,” sold for over $1 million in August 2018 in Monterey, CA.

“My father and I were driving a Karmann Hardtop on the Autobahn in 1964 and this car came flying by. It had a sound that went into my bone marrow and it stayed with me for the rest of my life,” said Ruf.

That car was a 911 and Ruf stated that the “encounter” was something that shaped and changed the direction of his life. Indeed, it did. RUF is a world-renowned manufacturer of highly customized, superior quality autos that are built for individual buyers around the world.

“We produce about 30 cars per year – hand made and hand built,” he said. “Our latest cars resemble the CTR from 1987. We use carbon fiber like modern race cars and the front and back end are made of lightweight steel. It weighs 1250 kilos (2,775 pounds) with a 701 horse power – that’s a good combination.”

Ruf and Carastro met in 1978 when Carastro was in the army and stationed in Germany.

“A friend and I went to a Bob Dylan concert in Nuremberg,” Carastro recalled. “He showed me a cover of a car magazine, this shop in Germany and I dropped by that shop and met Alois.”

Carastro drove his Targa over to Ruf’s shop that day and since then, the two have been lifelong friends.

“It is a rare treat for him (Ruf) to come to our event,” said Carastro.

The banquet was catered by Relish Distinctive Catering and a 50/50 drawing was held. PCA matched the funds with a contribution to Fisher House, a nonprofit organization that provides a home away from home for veterans (and their families) who receive treatment at the VA Hospital in Charleston.

During closing remarks, past presidents were recognized and event prizes were passed out to winners.

“Fifty years for this region of the Porsche Club of America means a great deal to everyone here,” said Ruf. “I see people here that started all this in 1969 and I see people new to the club—it’s wonderful to see how this community comes together and they all speak one language – Porsche.”

Carastro agreed. “Here’s to another 50 years.”

A resounding roar of agreement came from the crowd, with much applause.

As they say, “Porsche – there is no substitute.”

For more information about PCA, visit their website at www.pcapalmetto.org.