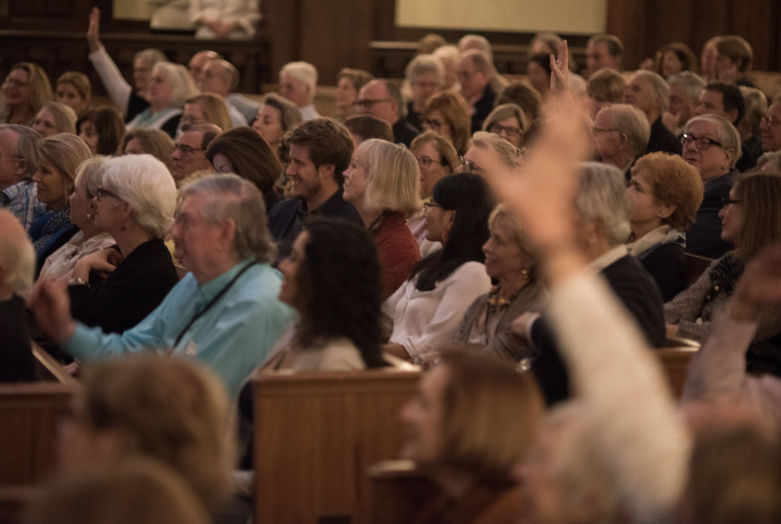 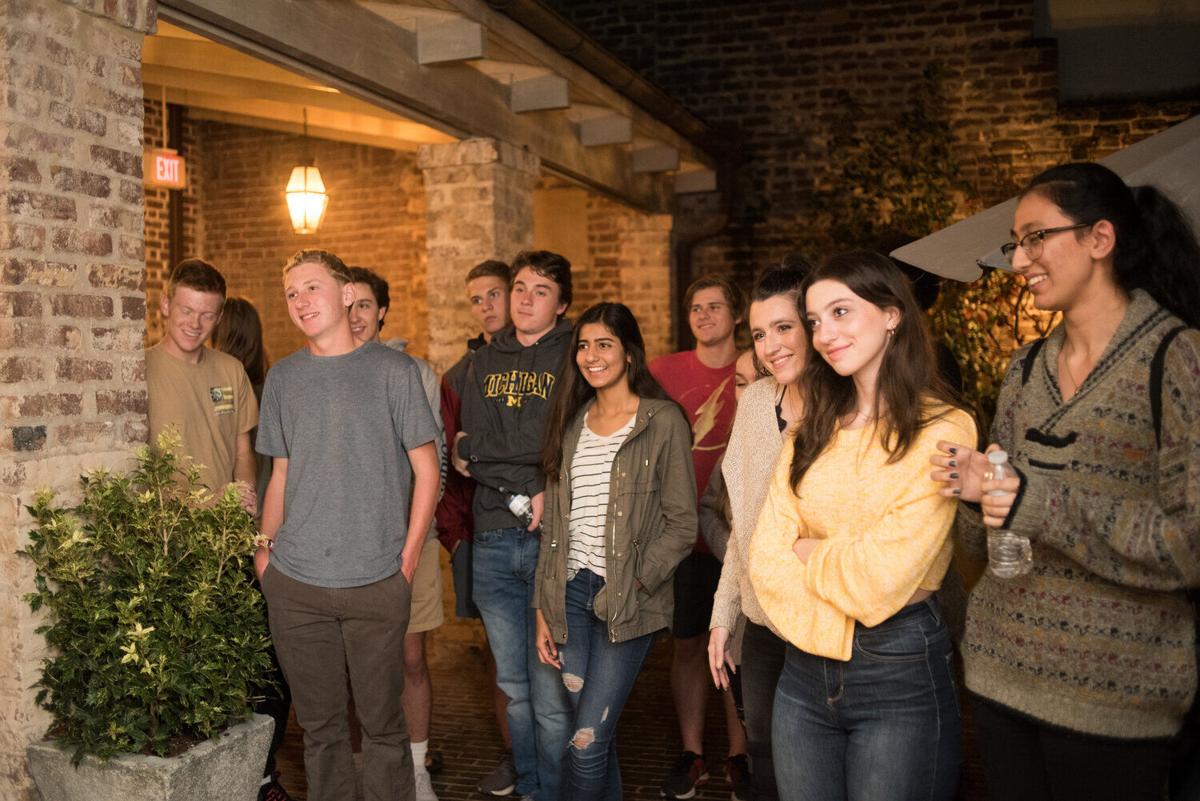 There are many ways to tackle the expansive, immersive Charleston Literary Festival. You can dabble or dive, pick a disciplinary lane or surf a range of topics.

Over the course of 11 days of programming Nov. 4–13 mainly at Dock Street Theatre and Circular Congregational Church, the annual lit-in deftly careers from fiction to nonfiction, from science to scholarly sleuthing, from politics to poetry, wrangling a slew of serious thinkers throughout.

The one-hour events vary in approach from free-form conversations to others tricked out with visual aids. These choices are based on the style of the interviewer and interviewee.

The November timing is auspicious for loading up on fortifying reads ahead of the coming chilly months, with Buxton Books manning a revolving table of author signings.

So, yes, we do want in on the “dirty secret” why Pulitzer Prize-winning phenom Geraldine Brooks writes historical fiction (she knows the ending) — and why Hernan Diaz in a discussion of his new novel “Trust” cries foul on the very term historical fiction.

And we do want the skinny on why a Pulitzer-anointed journalist, arts critic Margo Jefferson, elected as a teen to eschew an unapologetically sweaty Ella Fitzgerald in favor of a tragically glamorous Billie Holiday. And this critic wants a name check of the artists who made Jefferson the person she became, by way of a reflective chat with Charleston’s Belinda Gergel about her second memoir, “Constructing a Nervous System.”

And, sure, please let us know which royal family member media icon Tina Brown most warmed to (that would be Camilla, Queen Consort of the Royal Kingdom) while writing “The Palace Papers.” And while we’re at that “Press and Palace” talk, we might note “Diamonds and Deadlines” author Betsy Prioleau’s observations on said aristocrats perhaps were met with polite chill by the Brits on stage.

Give or take such a segue into the world of media, this year I selected events more or less related to the state of the arts, approaching the festival like a vocation-related conference (minus the dire fluorescent lighting and its attendant nagging emptiness I’ve long associated with such gatherings).

Instead, I settled into warm wooden seats of venerable Charleston venues, shoulder to cashmere shoulder with convivial, largely tweedy types who arrived in impressive droves. Some talks, like Charleston literary prof Anne Blessing’s interview with Brooks on her novel “Horse,” were so booked it almost eluded me until a lovely patron with a spare offered me one. There I discovered the art: The work involving thoroughbred racing and Black jockeys hinged upon a painting, with Brooks weighing in on the power of art to affect change.

Other events offered arts-centric points of departure. John Taylor Williams, author of “The Shores of Bohemia,” recreated the particularly fertile creative ground of Cape Cod from 1910 to 1960, when a coterie of artists, journalists and activists took up residence in beach shacks to change the world. I wondered if circumstances could today converge to forge such a collective, concerted groundswell of influence.

On the final Sunday afternoon, as it deepened into a raw fall night, actor Edoardo Ballerini gave us the genuine article, live art, by way of his hypnotic, haunting, deeply affecting performance of T.S. Eliot’s “The Lovesong of J. Alfred Prufrock” and “The Waste Land.”

Earlier that afternoon, I had gleaned new insights to the poet by way of scholar Lyndall Gordon, who in her new book, “The Hyacinth Girl: T.S. Eliot’s Hidden Muse,” has unfolded dense layers of his letters to a previously obscured paramour and muse Emily Hale.

And, just after I revisited Eliot’s love songs and cruel April in light of this new information, Charleston writer and historian Harlan Greene channeled his outsize knowledge of George Gershwin’s opera “Porgy and Bess” to reassess this significant Charleston-set work, and if and how to present it today, with American soprano Alyson Cambridge and Geoffrey Harpham, author of “Citizenship on Catfish Row.”

The festival prompted my own further thoughts on what qualifies as a work of art when Tiya Miles, the author of “All That She Carried: The Journey of Ashley’s Sack, a Family Keepsake” spoke, and choked up, over an artifact, a sack that had been adorned with embroidered words that had once belonged to an enslaved mother in downtown Charleston. She gave it to her 9-year-old daughter Ashley just before the child was to be sold and forever separated from her.

Later, Ashley’s granddaughter Ruth Middleton embroidered on it an explanation of its provenance, with red threads writing, “It be filled with my love always,” transforming it into a stirring expression in textile.

In a historic Charleston park, the art is about to mushroom

Some discussions were more charged than others, as is the bent where two or three are gathered. The standouts transpired from those candid moments when conversation flowed frankly on stage. Note to self: Do not pace the author through unnecessary plot points. Coax out new truths, and bring your true self to the stage.

So I did spill out with a heartening notion. Even in the face of today’s home screens flashing their digestible eye candy, even with a stultifying pandemic shuttering the cultural world, and even with a nationwide rank of naysayers that aim to banish art to a designated side of the political divide, a literary festival with a fine point on the arts can draw crowd upon crowd, and sell book after book.

There is always more work to be done. For meaningful exchange, the festival’s impact would deepen by reaching different segments of the community. It would benefit from pushing the talk further still.

But the annual brain trust is staggering. A couple of weeks after the festival, Imani Perry was awarded the National Book Award for “South to America,” the book she discussed in Charleston. Fingers crossed it will be among those that the festival is planning to share, with an announcement about recorded content coming in 2023.

All in all, I left with my nervous system newly charged and my arms newly loaded with books. On the shores of Charleston, this fine and full-on festival might be just the proof we need that art’s agency abides.

Review: Pure's production of 'Hangmen' lures audiences from the lurid to the laughable

All in all, with a brilliant work and effective ensemble, “Hangmen” leveled a sure hand — and a gripping chokehold, too. Read moreReview: Pure's production of 'Hangmen' lures audiences from the lurid to the laughable

Review: Heyward conducts Charleston Symphony in a 'soul-fortifying' success of a concert

Classical music still has a phenomenal pulse, and a vital part, in how we navigate this tricky terrain called life. By the range of feelings it unleashed in me, I can pronounce my pulse is going too. Read moreReview: Heyward conducts Charleston Symphony in a 'soul-fortifying' success of a concert