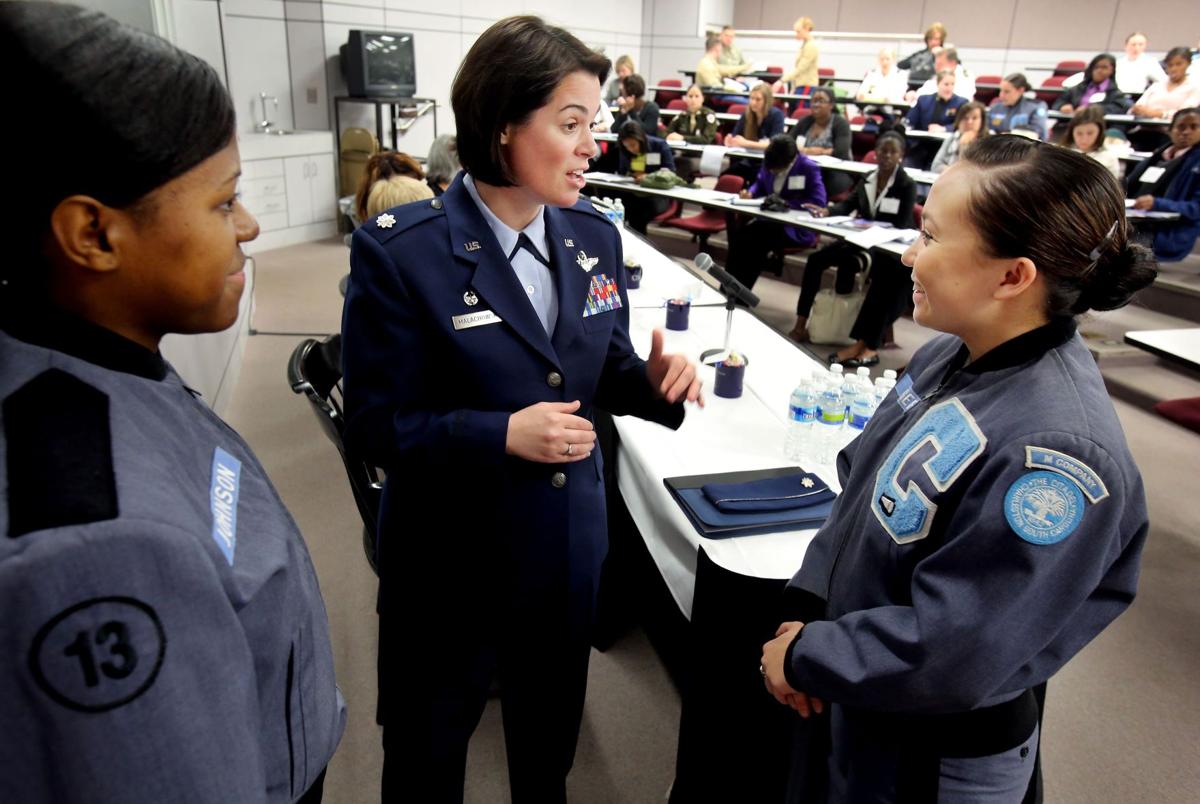 Cadets Angel Johnson (left) and Faliesha Yeager (right) greet Air Force Lt. Col. Nicole Malachowski on Thursday. The pilot was a speaker at one of The Citadel’s leadership programs, which just received $9 million. The military school and other colleges have put the state in the top tier for graduation rates. 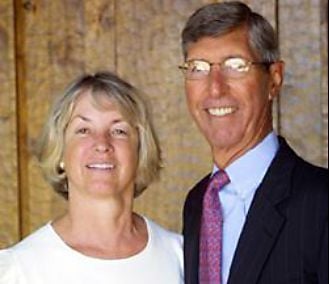 Bill and Gay Krause have donated $9 million to The Citadel for its leadership program. (Provided) 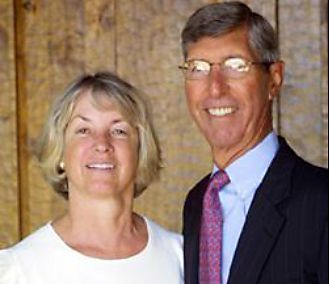 Bill and Gay Krause have donated $9 million to The Citadel for its leadership program.

Cadets Angel Johnson (left) and Faliesha Yeager (right) greet Air Force Lt. Col. Nicole Malachowski on Thursday. The pilot was a speaker at one of The Citadel’s leadership programs, which just received $9 million. The military school and other colleges have put the state in the top tier for graduation rates.

Bill and Gay Krause have donated $9 million to The Citadel for its leadership program. (Provided)

Bill and Gay Krause have donated $9 million to The Citadel for its leadership program.

Citadel cadet Angel Johnson says she will graduate in four years largely because the military college taught her to manage her time and offered myriad academic support services.

Johnson, a senior from Hanahan, said the college requires cadets to study each evening from 7:50 p.m. until about 11 p.m. And it has an academic support center, individual tutors, and upper-class cadets who push younger students to excel.

Johnson will graduate in May with a 3.87 grade-point average. Then she plans to join the Air Force as an intelligence officer.

“My mother said she thinks my grades would not have been half as good if I had attended another school,” she said.

A recently released report in The Chronicle of Higher Education based on data from the National Student Clearinghouse found South Carolina’s college graduation rate is 71.52 percent, the sixth-highest in the nation. The state’s high school graduation rate, 74 percent, ranks 10th from the bottom.

Julie Carullo, acting executive director of the state’s Commission on Higher Education, said the results of the report aren’t surprising. While South Carolina struggles with getting students through high school, the rates at which students who complete high school enroll in and graduate from college usually are higher than the national average.

At the state level, lottery-funded scholarships likely contribute to the graduation rate because students must make academic progress to hold on to them from year to year, Carullo said. Individual schools also have established retention programs, which boost the rate as well.

Johnson said she remembers struggling with an English course. She took advantage of The Citadel’s academic support center to help her through it. She wrote drafts of her papers, then got feedback on them from someone at the center. She ended up getting an “A” in the course, she said.

She took the advice of her academic officer, who was a senior when she was a freshman. He told her to take advantage of all of the school’s services, even if she wasn’t on the verge of failing a course, she said. “He said, ‘Why get a “B” when you could get an “A” ’ ?”

While the state’s graduation rate is comparatively high, Carullo said, it could be better. The commission is working to better align high school and college course work. “If they’re coming out of K-12 better prepared, that’s going to help with success in college,” she said.

She also said more financial assistance for low-income students would help students forced to leave school because they simply can’t afford it. But the commission has not been successful bringing in more state money for need-based financial aid in recent years.

The National Student Clearinghouse used a more inclusive formula than the one the commission uses to calculate graduation rates. The clearinghouse included in the ranking full-time and part-time students who enrolled in public four-year institutions in 2006 and graduated from the same or another institution by the end of the 2011-12 school year. It also included students who still were enrolled in higher education six years later.

While the report included state averages, it didn’t include data for specific schools. The national average was 60.57 percent.

The commission includes in its rate only the percentage of full-time students who enroll in a four-year institution and graduate from the same institution within six years. Under that formula, the state’s graduation rate is only 60 percent.

Citadel Provost Sam Hines said the military college has the highest four-year graduation rate in the state, which is 60.2 percent under the commission’s formula — and it’s working to boost it even higher. The college’s requirement that all students live on campus likely contributes to student success, he said. The college also tracks students’ academic progress, and steps in to offer an extensive array of support services if they are veering off course. “On the academic side of the house, retention is Job One,” Hines said.

At the College of Charleston, Director of Student Retention Anne McNeal said the college is in the second year of a program that focuses intensely on retaining students from the freshman to sophomore year. College leaders who studied attrition found that half of students who left did so between those two years.

Now, all freshmen either must enroll in a first-year experience program or be part of a designated learning community, she said. Both efforts are aimed at getting students more connected to and engaged with the school, she said. “Students need to be academically and socially engaged with the college to be successful,” she said. “The more support we give individual students, the more likely they are to succeed.”

LaQunya Baker, a senior at the college, said she will graduate in four years, which she attributes to staying focused and surrounding herself with other students driven to succeed.

The Columbia resident who plans to attend law school in the fall said she thinks she would have graduated in four years no matter what. But, she said, a freshman seminar on diversity she completed helped her adjust. Baker is black and the vast majority of students at the college are white. Many minority students have trouble in predominantly white institutions because they feel isolated, she said.

The college has all of the academic services students need, she said. But they have to seek them out and take advantage of them. “It’s more the responsibility of the student,” she said. “You have to allow people to help you.”