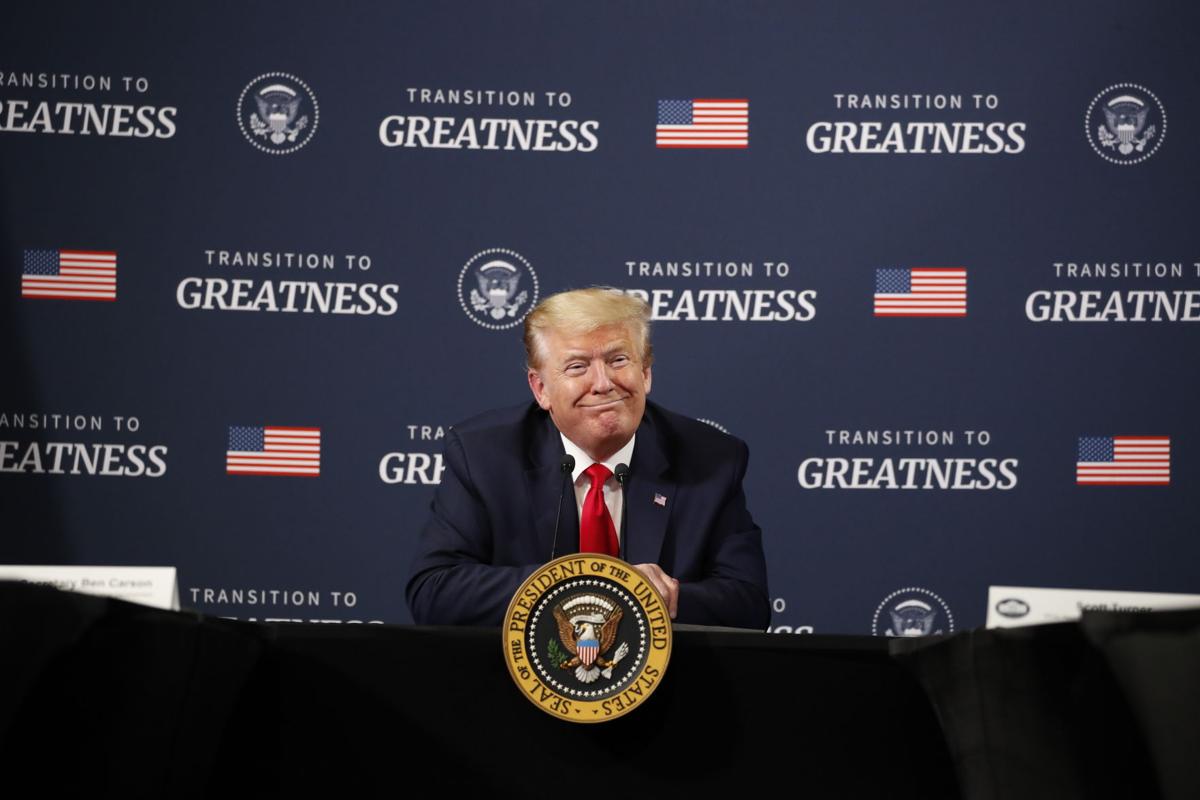 President Donald Trump speaks during a listening session with African American leaders at Ford's Rawsonville Components Plant that has been converted to making personal protection and medical equipment, Thursday, May 21, 2020, in Ypsilanti, Mich. Alex Brandon/AP 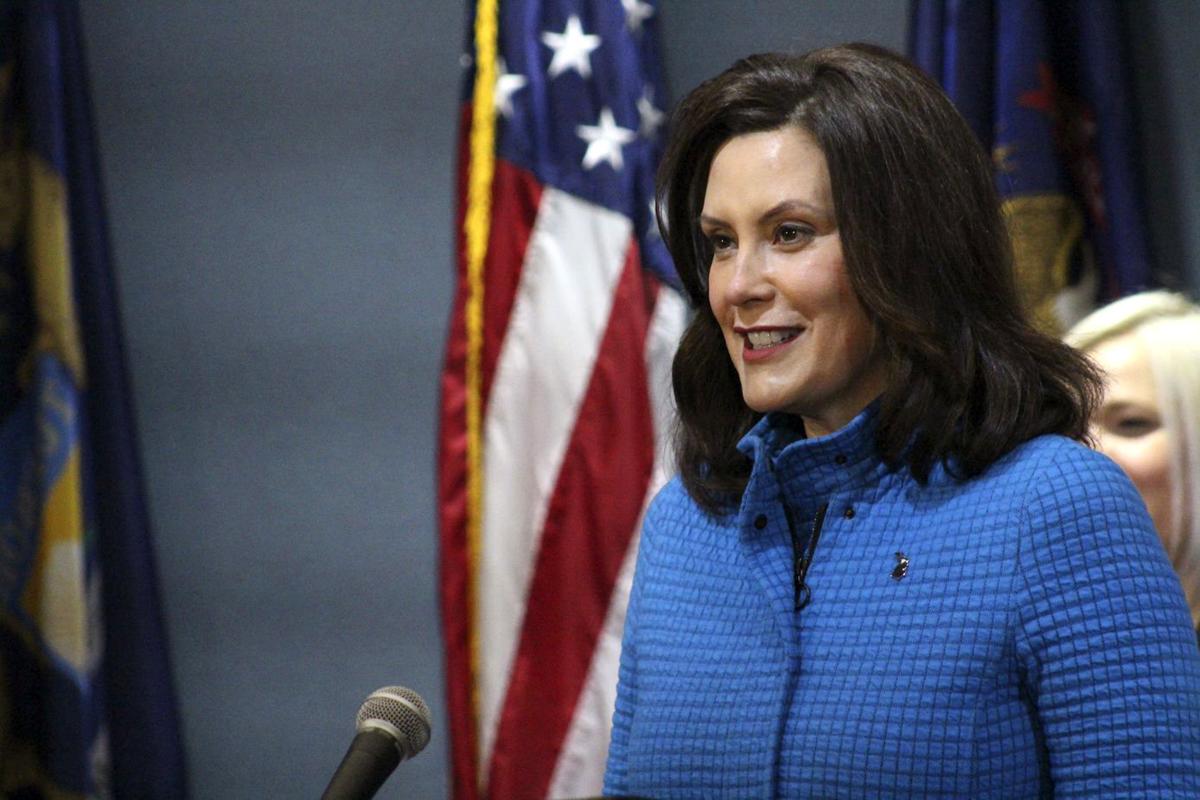 Michigan Gov. Gretchen Whitmer speaks during a news conference Monday in Lansing, Mich. Restaurants, bars and other retail businesses can reopen in much of northern Michigan starting Friday, May 22, 2020. Pool/AP

President Donald Trump speaks during a listening session with African American leaders at Ford's Rawsonville Components Plant that has been converted to making personal protection and medical equipment, Thursday, May 21, 2020, in Ypsilanti, Mich. Alex Brandon/AP

Michigan Gov. Gretchen Whitmer speaks during a news conference Monday in Lansing, Mich. Restaurants, bars and other retail businesses can reopen in much of northern Michigan starting Friday, May 22, 2020. Pool/AP

Trump visited Ypsilanti, outside Detroit, to tour a Ford Motor Co. factory that had been repurposed to manufacture ventilators, the medical breathing machines governors begged for during the height of the COVID-19 pandemic.

But his arrival came amid a long-running feud with the state's Democratic governor and a day after the president threatened to withhold federal funds over the state's expanded vote-by-mail effort. And, again, the president did not wear a face covering despite a warning from the state's top law enforcement officer that a refusal to do so might lead to a ban on Trump''s return.

All of the Ford executives giving Trump the tour were wearings masks, the president standing alone without one. At one point, he did did take a White House-branded mask from his pocket and claimed to reporters he had worn it elsewhere on the tour, out of public view.

“I did not to want to give the press the pleasure of seeing it," Trump said.

For a moment, he also teasingly held up a clear shield in front of his face.

Michigan Attorney General Dana Nessel said that mask wearing isn’t just Ford’s policy but it’s also the law in a state that’s among those hardest hit by the virus. Nessel said that if Trump refused to wear a mask Thursday “he’s going to be asked not to return to any enclosed facilities inside our state.”

“If we know that he’s coming to our state and we know he’s not going to follow the law, I think we’re going to have to take action against any company or any facility that allows him inside those facilities and puts our workers at risk,” Nessel told CNN. “We just simply can’t afford it here in our state.”

Trump has refused to wear a face mask in public, telling aides he believes it makes him look weak, though it is a practice that federal health authorities say all Americans should adopt to help slow the spread of the virus.

Ford said everyone in its factories must wear personal protective equipment, including masks, and that its policy had been communicated to the White House. At least two people who work in the White House and had been physically close to Trump recently tested positive for the virus. Trump is tested daily; he said Thursday he tested negative that morning.

An executive order issued by Gov. Gretchen Whitmer requires factories to suspend all nonessential in-person visits, including tours, though Nessel said her office would not bar Trump.

The Republican president and Whitmer have clashed during the coronavirus outbreak over her criticism of the federal government's response to the state's needs for medical equipment, like ventilators, and personal protective gear, such as gloves, masks and gowns. Trump on Thursday offered veiled criticism of Whitmer and other Democratic governors, suggesting that they were proceeding too slowly in reopening their states' economies.

Trump narrowly won Michigan in 2016. He insists mail-in voting is ripe for fraud, although there is scant evidence of wrongdoing.

“We don’t want them to do mail in ballots because it’s going to lead to total election fraud," Trump said Thursday, But then he allowed for some exceptions, including for himself.

“Now, if somebody has to mail it in because they’re sick, or by the way because they live in the White House and they have to vote in Florida and they won’t be in Florida. But there’s a reason for it, that’s OK."

Trying to signal to the nation that life is returning to normal, the president had begun traveling again, with all of his initial trips to states that will be hotly contested in this November’s election. Campaign advisers have grown increasingly worried about Michigan, believing that the president’s attacks on Whitmer have not worked and that the toll the virus has taken in the Detroit area, particularly among African Americans, will prove costly politically.

Trump, at a roundtable with African American supporters in front of a sign with his slogan for reopening the economy, “Transition to Greatness," noted low minority unemployment numbers before the pandemic and also pointed to his administration's work on criminal justice reform.

The president's advisers have become convinced that of the three Rust Belt states that Trump took from Democrats in 2016, Michigan would be much more difficult to win again than Pennsylvania and, especially, Wisconsin.

In the early days of the crisis, Whitmer and other governors and medical workers clamored for ventilators, fearing a shortage of the machines would prove deadly as the virus made breathing difficult for the scores of afflicted patients who were being brought to hospitals.

But the U.S. now has a surplus of the breathing machines, leading Trump to begin describing the U.S. as the “king of ventilators.”

Whitmer was not expected to accompany Trump during the visit.

“We do not have plans to meet, but I did speak with him yesterday on the phone," Whitmer told "CBS This Morning” on Thursday. “I made the case that, you know, we all have to be on the same page here. We’ve gotta stop demonizing one another and, really, focus on the fact that the common enemy is the virus.”

Trump on Wednesday said he and Whitmer in their call discussed the coronavirus pandemic and the catastrophic flooding and mass evacuations caused by the failure of dams in the state's central region — not his tweeted threat to withhold federal money.

Trump also needled Whitmer on Twitter over her decision to keep stay-at-home orders largely in place. He said military and federal emergency management teams had been sent to assist with the flood response but added that the “Governor must now ‘set you free’ to help.”

That was a reference to his strong push for states to lift stay-at-home restrictions and allow businesses to reopen so people can resume shopping and dining out.

Last month, Trump tweeted “LIBERATE MICHIGAN” as residents there and in other states began holding protests against orders to stay at home.