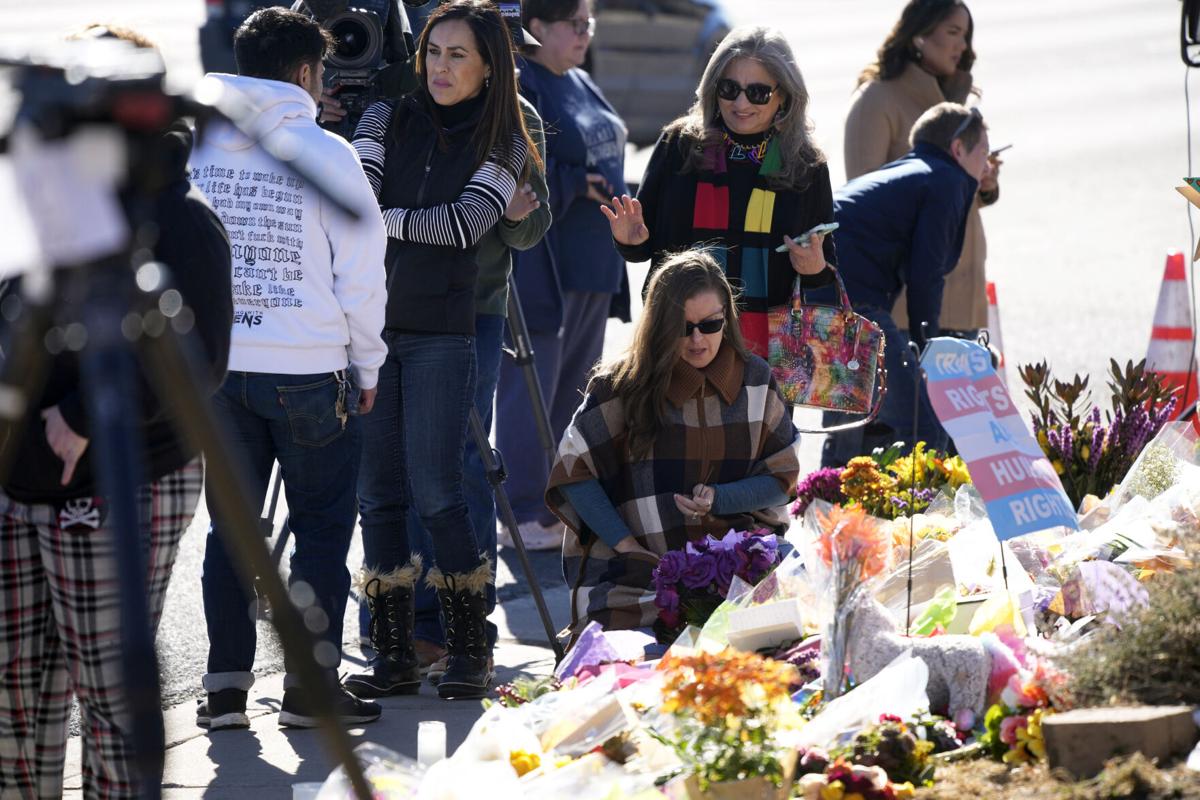 Bouquets of flowers sit on a corner near the site of a mass shooting at a gay bar Monday, Nov. 21, 2022, in Colorado Springs, Colo. Club Q on its Facebook page thanked the "quick reactions of heroic customers that subdued the gunman and ended this hate attack.”   David Zalubowski/AP 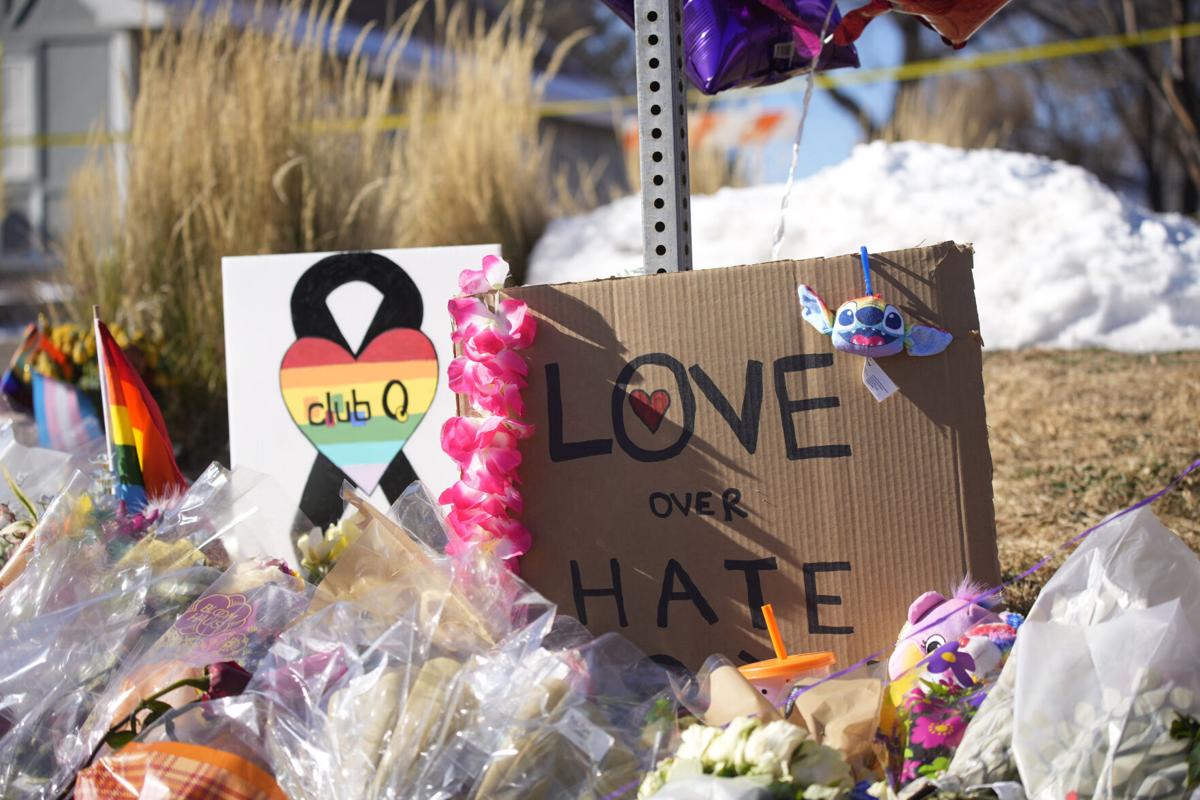 Bouquets of flowers sit on a corner near the site of a mass shooting at a gay bar Monday, Nov. 21, 2022, in Colorado Springs, Colo. Club Q on its Facebook page thanked the "quick reactions of heroic customers that subdued the gunman and ended this hate attack.” David Zalubowski/AP

COLORADO SPRINGS, Colo. — The man suspected of opening fire at a gay nightclub in Colorado Springs was being held on murder and hate crimes charges Monday, two days after the attack that killed five people and wounded many others.

The charges were preliminary, and prosecutors had not filed them in court. The hate crime charges would require proving that the gunman was motivated by bias, such as against the victims’ actual or perceived sexual orientation or gender identity.

The attack was halted when a patron grabbed a handgun from Aldrich, hit him with it and pinned him down until police arrived minutes later.

Court documents laying out what led to Aldrich’s arrest have been sealed at the request of prosecutors, who said releasing details could jeopardize the investigation. Information on a lawyer for Aldrich was not immediately available.

A law enforcement official said the suspect used an AR-15-style semiautomatic weapon, but a handgun and additional ammunition magazines also were recovered. The official could not discuss details of the investigation publicly and spoke to The Associated Press on condition of anonymity.

Of the 25 injured at Club Q, some were hurt trying to flee, and it was unclear how many were shot, a police spokesperson said.

Questions were quickly raised about why authorities didn’t seek to take Aldrich’s guns away from him in 2021, when he was arrested after his mother reported he threatened her with a homemade bomb and other weapons.

Though authorities at the time said no explosives were found, gun-control advocates have asked why police didn’t use Colorado’s “red flag” laws to seize the weapons his mother says he had. There’s no public record prosecutors ever moved forward with felony kidnapping and menacing charges against Aldrich.

Suthers told the AP there was “reason to hope” all of the hospitalized victims would recover.

The shooting rekindled memories of the 2016 massacre at the Pulse gay nightclub in Orlando, Florida, that killed 49 people. Colorado has experienced several mass killings, including at Columbine High School in 1999, a movie theater in suburban Denver in 2012 and at a Boulder supermarket last year.

It was the sixth mass killing this month and came in a year when the nation was shaken by the deaths of 21 in a school shooting in Uvalde, Texas.

This weekend's violence pierced the cozy confines of an entertainment venue long cherished as a safe spot for the LGBTQ community in the conservative-leaning city.

A makeshift memorial that sprang up in the hours after the attack continued to grow Monday, as a steady stream of mourners brought flowers and left messages in support of the LGBTQ community. The shooting site remained cordoned off.

“It’s a reminder that love and acceptance still have a long way to go,” Colorado Springs resident Mary Nikkel said at the site. “This growing monument to people is saying that it matters what happened to you … We’re just not letting it go.”

The club was one of two nightspots for the LGBTQ community in Colorado Springs, residents said. Authorities were called at 11:57 p.m. Saturday with multiple reports of a shooting, and the first officer arrived at midnight.

Joshua Thurman said he was in the club with about two dozen other people and was dancing when the shots began. He initially thought it was part of the music, until he heard another shot and said he saw the flash of a gun muzzle.

Thurman, 34, said he ran to a dressing room where he hid with others. They locked the door, turned off the lights and got on the floor as they heard the violence unfolding, including the gunman being subdued.

“I could have lost my life — over what?” he said, tears running down his cheeks. “We weren’t out harming anyone. We were in our space, our community, our home, enjoying ourselves like everybody else does.”

Detectives were examining whether anyone had helped the suspect before the attack. Police Chief Adrian Vasquez said patrons who intervened during the attack were “heroic” and prevented more deaths.

Club Q is a gay and lesbian nightclub that features a drag show on Saturdays, according to its website. Club Q’s Facebook page said planned entertainment included a “punk and alternative show” preceding a birthday dance party, with a Sunday all-ages drag brunch.

Drag events have become a focus of anti-LGBTQ rhetoric and protests recently as opponents, including politicians, have proposed banning children from them, falsely claiming that they are used to “groom” children.

President Joe Biden said that "places that are supposed to be safe spaces of acceptance and celebration should never be turned into places of terror and violence.”

Colorado Gov. Jared Polis, who became the first openly gay man to be elected a U.S. governor in 2018, called the shooting “sickening.”

“My heart breaks for the family and friends of those lost, injured and traumatized,” Polis said.

The shooting came during Transgender Awareness Week and just at the start of Sunday’s Transgender Day of Remembrance, when events around the world are held to mourn and remember transgender people lost to violence.

Colorado Springs, a city of about 480,000 located 70 miles (110 kilometers) south of Denver, is home to the U.S. Air Force Academy and the U.S. Olympic Training Center, as well as Focus on the Family, a prominent evangelical Christian ministry that lobbies against LGBTQ rights. The group condemned the shooting and said it “exposes the evil and wickedness inside the human heart.”

In 2015, three people were killed and eight wounded at a Planned Parenthood clinic in the city when a gunman targeted the clinic because it performed abortions.

Since 2006, there have been 523 mass killings and 2,727 deaths as of Nov. 19, according to The Associated Press/USA Today database on mass killings in the U.S.

Bedayn is a corps member for The Associated Press/Report for America Statehouse News Initiative. Report for America is a nonprofit national service program that places journalists in local newsrooms to report on undercovered issues.

Justices spar in latest clash of religion and gay rights

President Joe Biden assured Americans on Friday that the U.S. economy is chugging along in the holiday season, but the very strength of a new jobs report showed that high inflation remains a recession threat. At the White House, the president signed an emergency bill to avert a rail strike that he said could have caused 765,000 job losses in two weeks and plunged the country into a painful downturn. But many voters and economists still fear that a recession is nigh and the price of reducing high prices will be layoffs. Read morePresident Biden sees economy avoiding recession, but risks remain