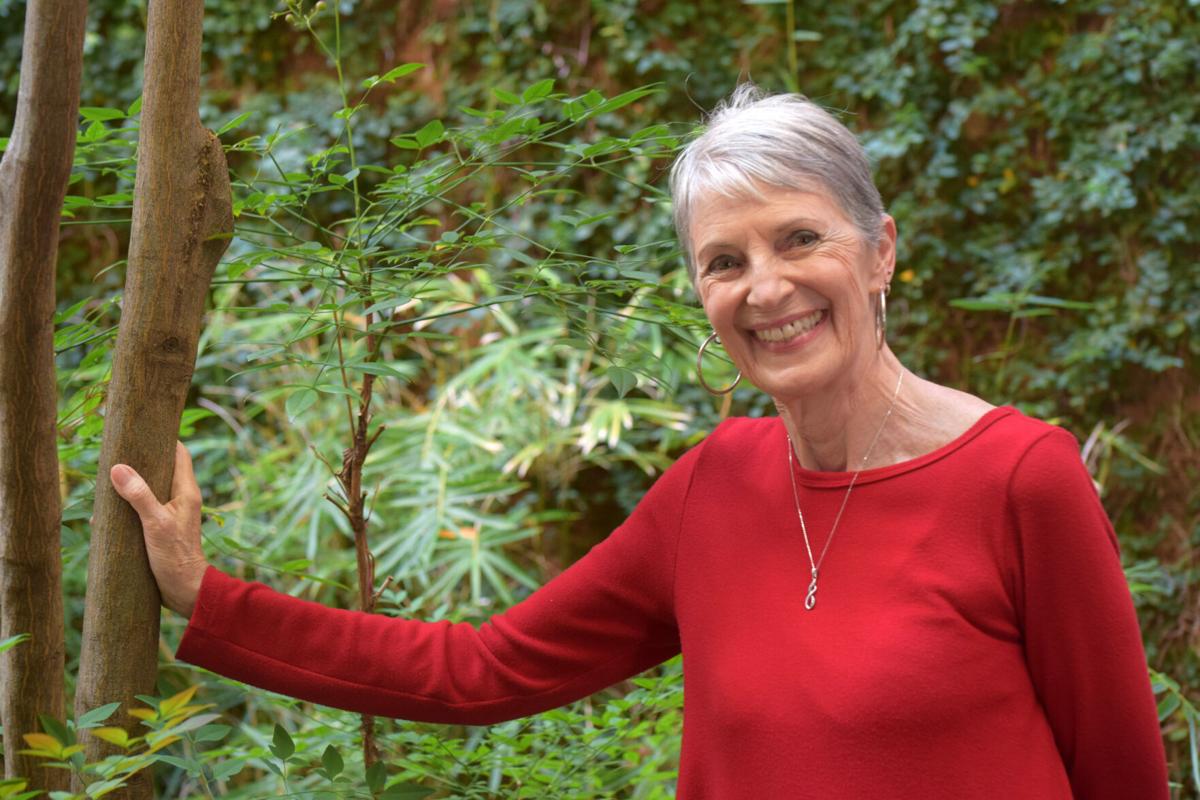 Nancy Hansen, who grew up in southeastern Pennsylvania, is largely known for her roles in Aiken Community Theatre and is also a longtime fitness instructor at H. Odell Weeks Activities Center. (Bill Bengtson/Staff) 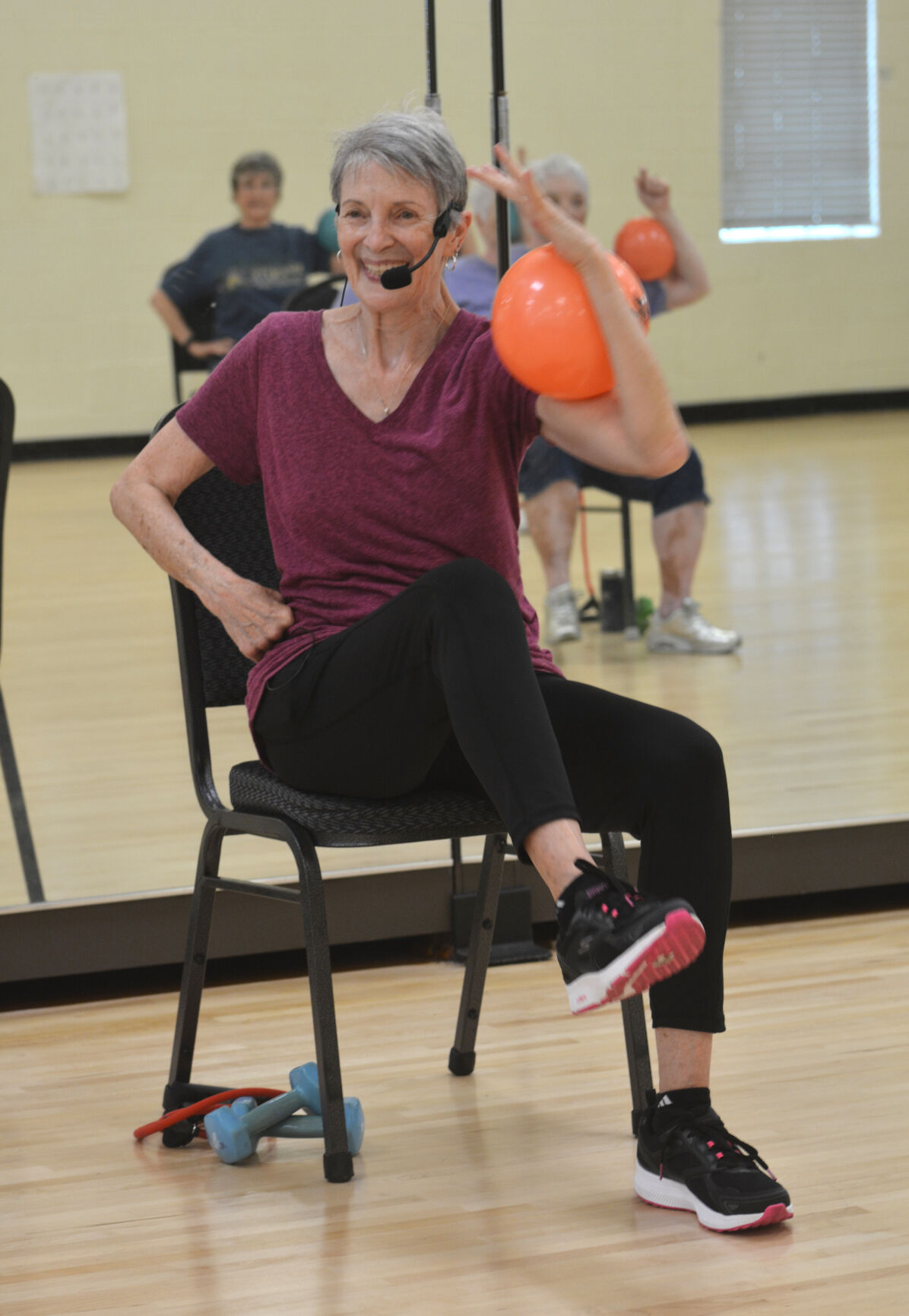 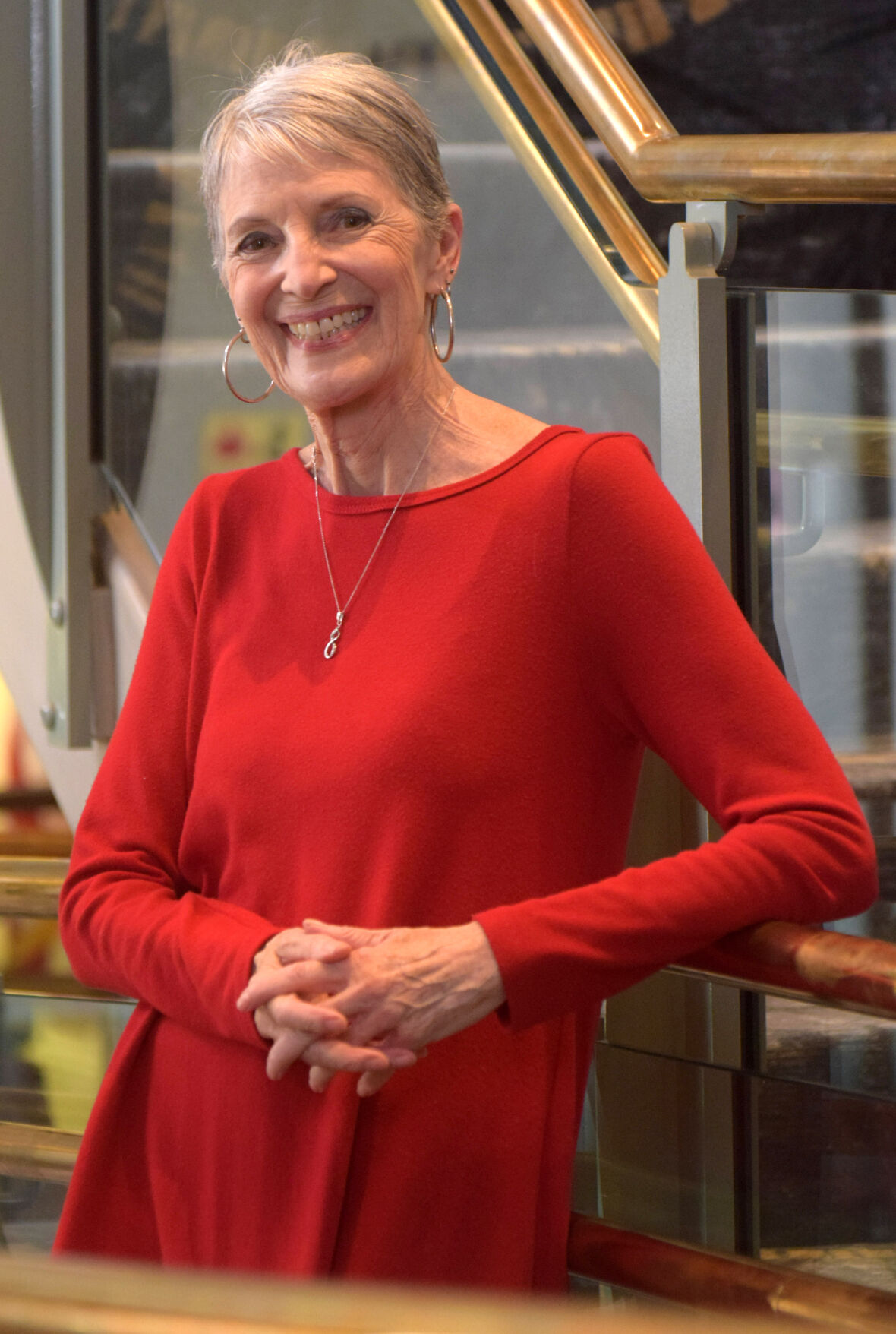 Aiken Community Theatre has been a major part of life for decades for Nancy Hansen, who is also known as as a fitness instructor at H. Odell Weeks Activities Center. (Bill Bengtson/Staff) 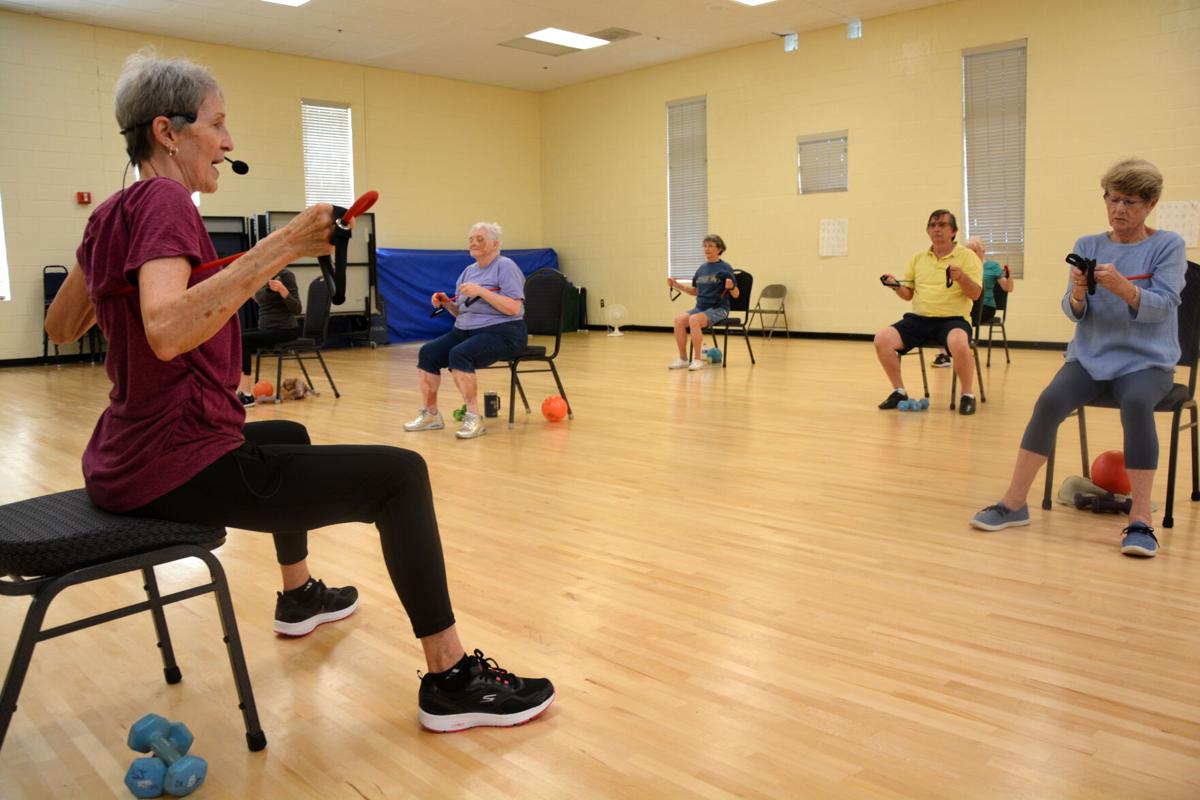 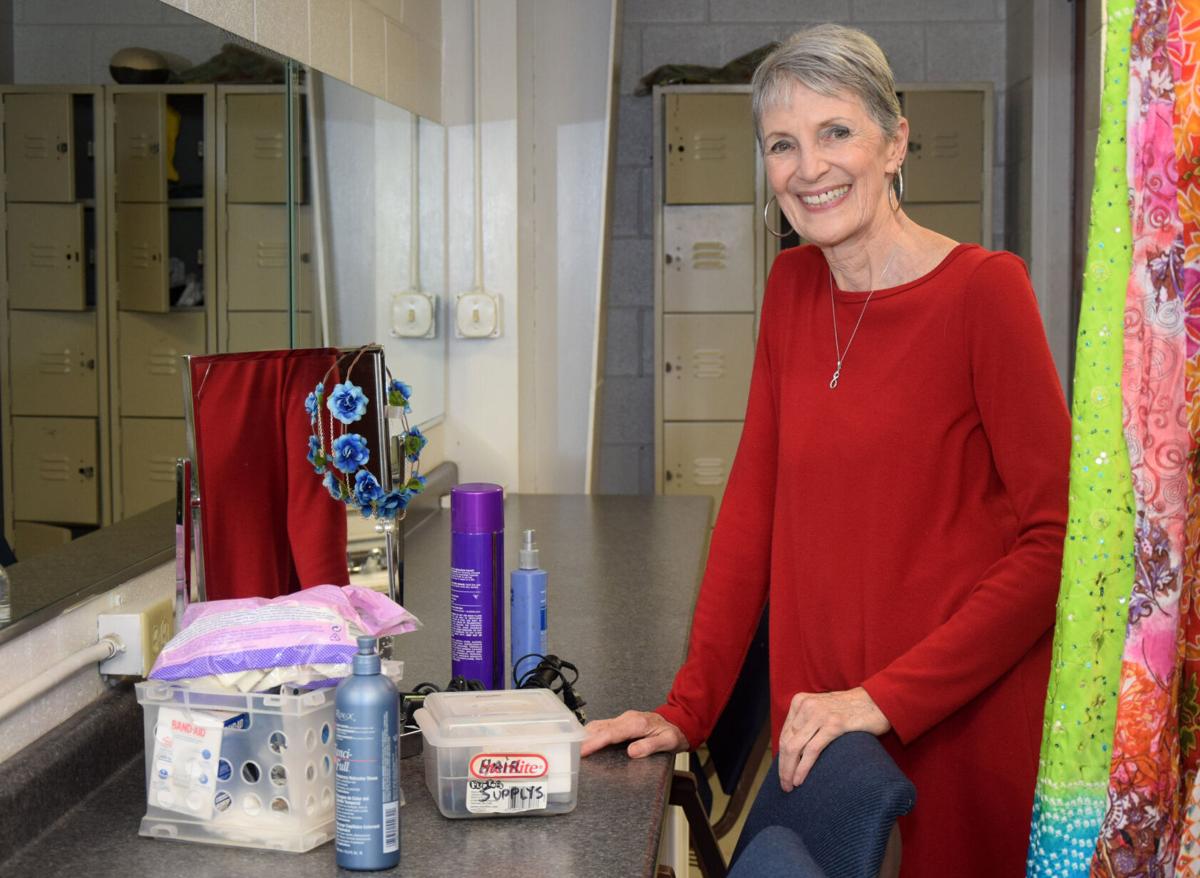 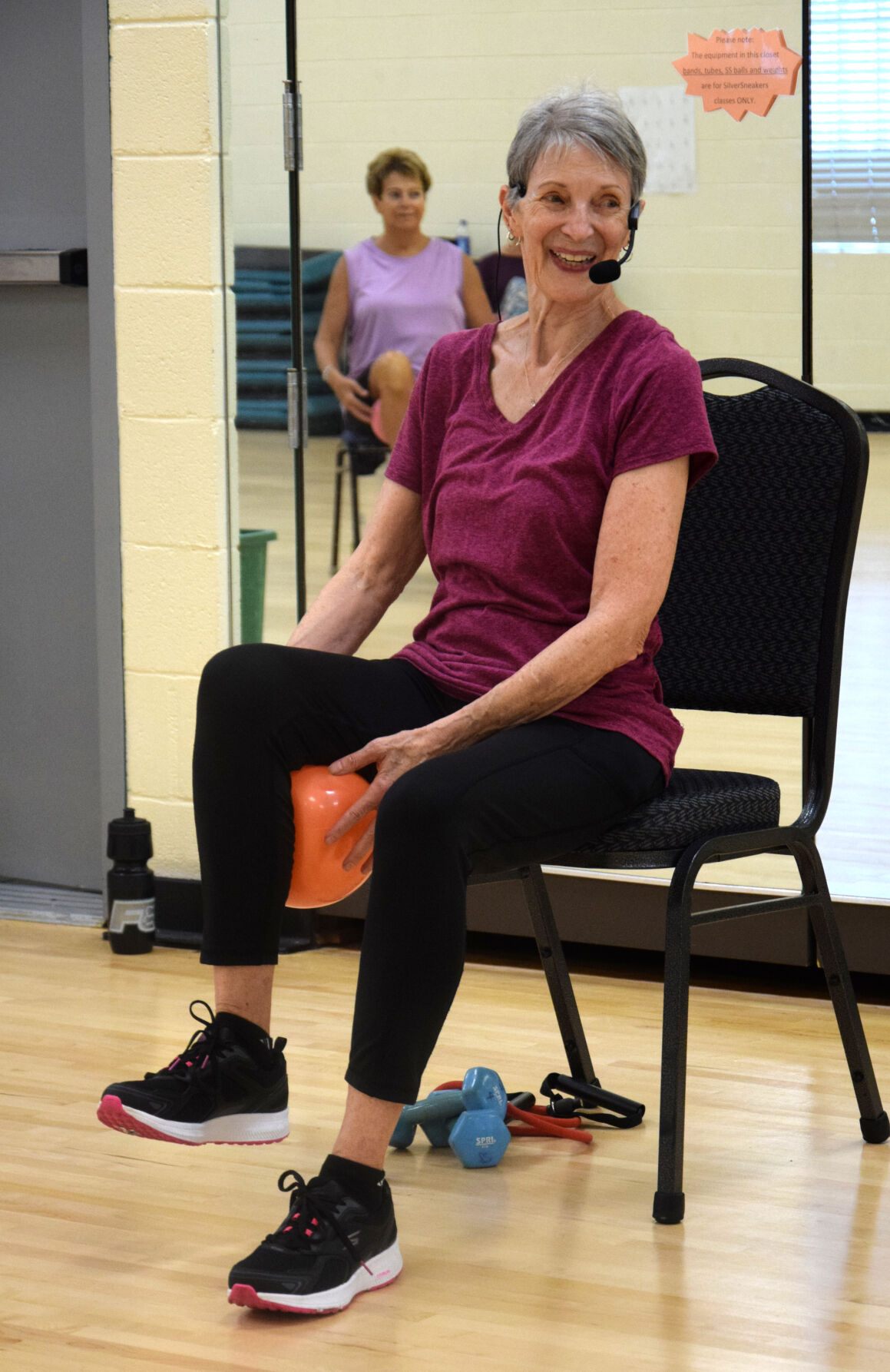 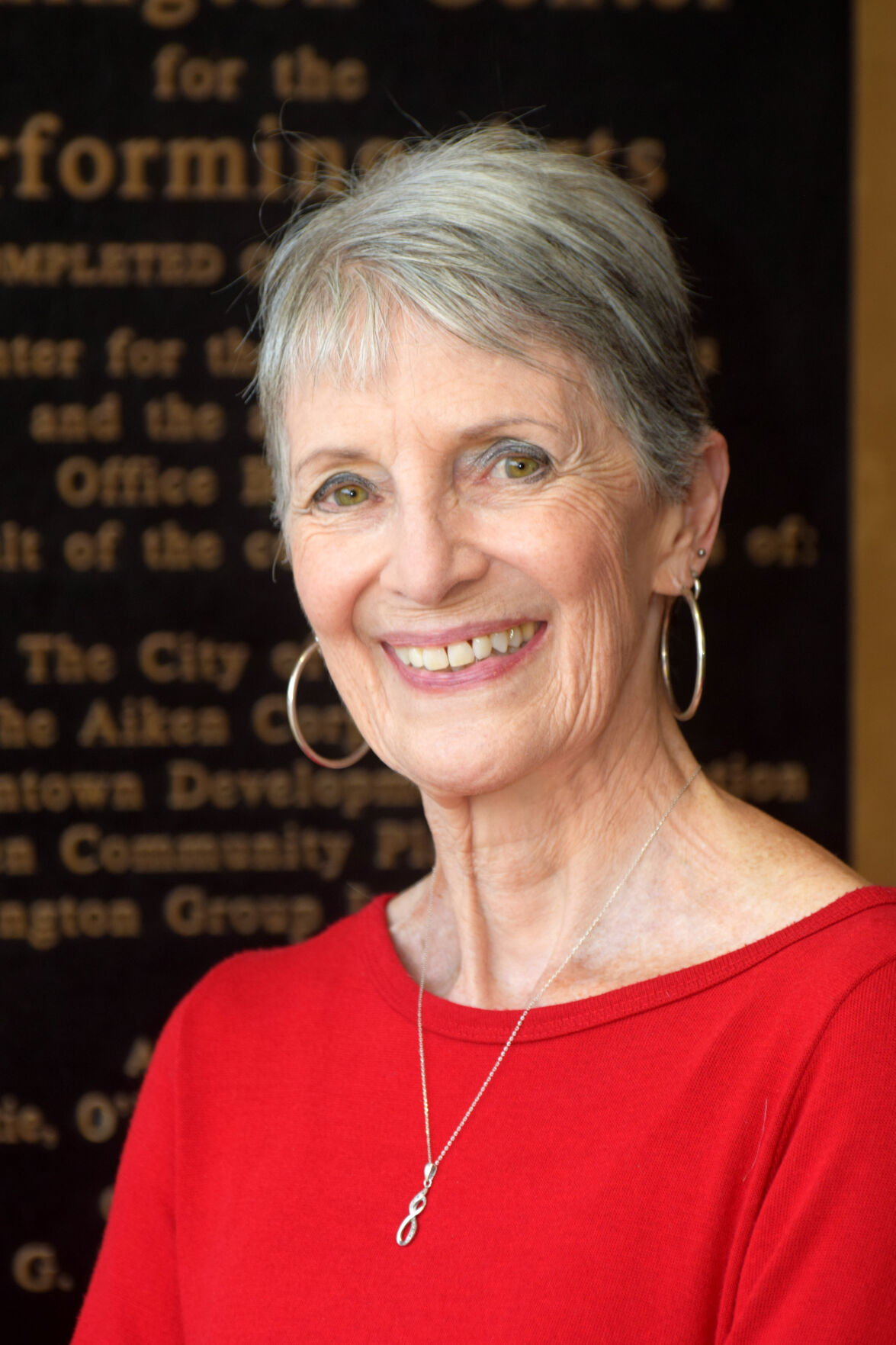 Local fitness instructor Nancy Hansen, a longtime part of Aiken Community Theatre, spent most of her childhood in southeastern Pennsylvania and has an academic background in library science. (Bill Bengtson/Staff) 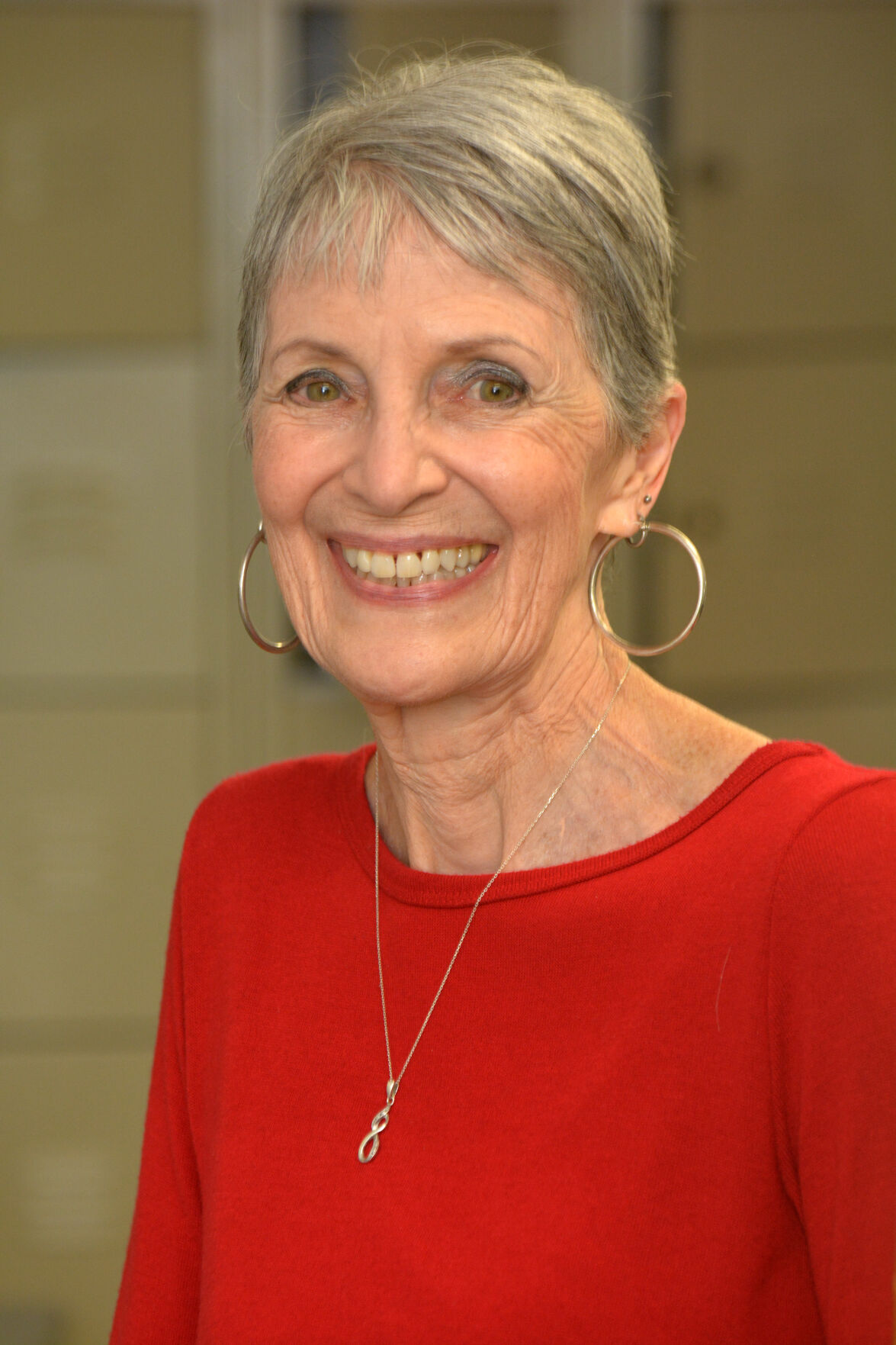 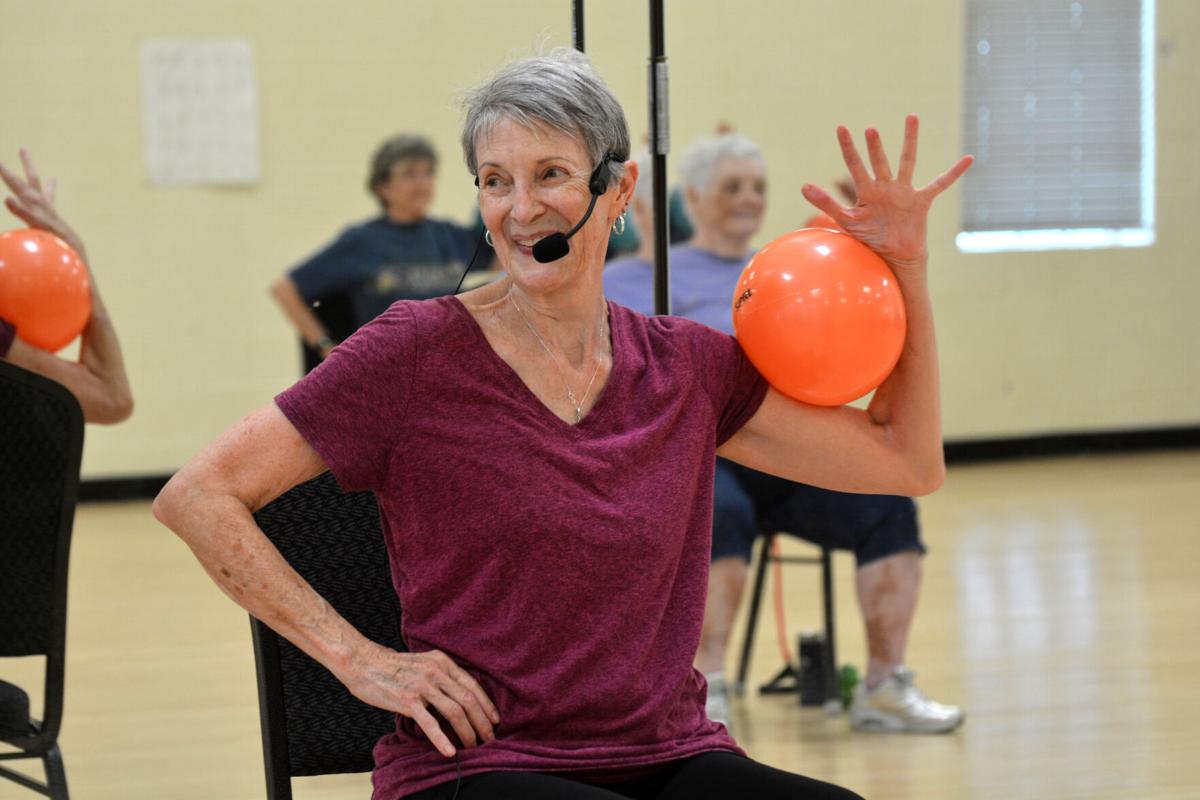 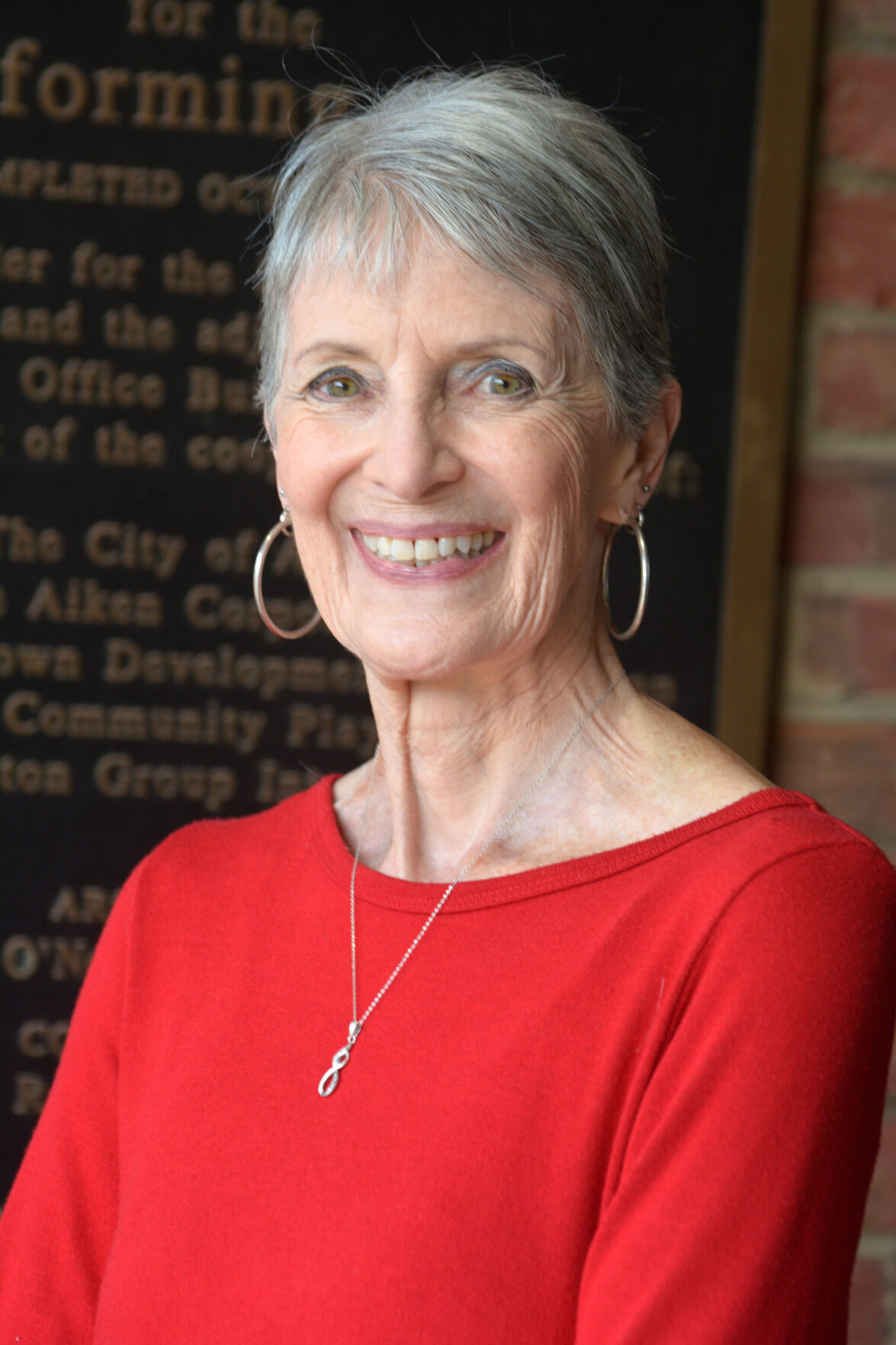 Nancy Hansen, a longtime part of Aiken Community Theatre, is also a fitness instructor, and has an academic background in library science. (Bill Bengtson/Staff)

Nancy Hansen, who grew up in southeastern Pennsylvania, is largely known for her roles in Aiken Community Theatre and is also a longtime fitness instructor at H. Odell Weeks Activities Center. (Bill Bengtson/Staff)

Aiken Community Theatre has been a major part of life for decades for Nancy Hansen, who is also known as as a fitness instructor at H. Odell Weeks Activities Center. (Bill Bengtson/Staff)

Local fitness instructor Nancy Hansen, a longtime part of Aiken Community Theatre, spent most of her childhood in southeastern Pennsylvania and has an academic background in library science. (Bill Bengtson/Staff)

Nancy Hansen, a longtime part of Aiken Community Theatre, is also a fitness instructor, and has an academic background in library science. (Bill Bengtson/Staff)

She's known to hundreds of local residents as a fitness instructor, and sharp-eyed theater enthusiasts may also know Nancy Gamba Hansen for her various roles – on both sides of the curtain – with Aiken Community Theatre.

Her academic background is actually in library science, and while the longtime Aiken resident is an avid reader and dance enthusiast, she has earned a living through her work at H. Odell Weeks Activities Center. Her focus is largely on the SilverSneakers program, described in promotional material as "a fitness and wellness program offered at no additional cost to seniors 65+ on eligible Medicare plans that helps you get active, get fit, and connect with others."

She knows her way around the written word, as her bachelor's degree from Boston University is in English literature, and she also has a master's in library science from Cal State Fullerton – the same school from which her husband, Jerry, has a bachelor's degree in physics.

The Hansens moved to Aiken in 1977, and fitness developed as an area of strong interest for the lady of the house, eventually leading her to step forward in 1982 to lead fitness classes at Odell Weeks while her husband pursued his career in safety management at the Savannah River Site.

"It was primarily because I enjoyed it," she recalled, noting that the schedule worked well for her, as she had one child at that point (on her way to three). "It got me into the community, and I really liked meeting people in the community, and it just seemed like it fit my life at the time."

She never intended to take on a role that would last for for decades, she said, adding that one of her fitness assistants, Evelyn Beck, has been on board with her since 1984. Strength training, aerobics and "a little bit of everything" became part of the mix.

"The program grew with me and ... I loved the community aspect. I'd meet people from all over Aiken ... and we've changed with the times."

SilverSneakers is "especially good for anyone who's just really looking to ... just have a healthier life, and without beating ourselves up or overdoing it, and we're not," she said.

She emphasized that Aiken's parks and recreation centers are open to all, and that the activities center in Virginia Acres Park "has wonderful classes available, with experienced instructors," with ample opportunities to meet and socialize with people from throughout the Aiken area.

A prime concern for Hansen now is "functional fitness." That amounts to "keeping our strength as we get older and working on balance – fall prevention, agility and coordination – so it's very, very functional. What we're doing, which I love – it feels like it matters."

She credited a variety of individuals with fine work over the decades in making the fitness programs strong, and also wrote, "Joy Donovan and Kristi Whitley teach with us now – both excellent instructors. As more gyms have opened up (and we have gotten older), we've cut way back on the classes we offer but we still are committed to the idea of a community center, where people from throughout all our neighborhoods, can come together and get healthier together; enjoy each other and get to know people we might not meet otherwise. The class participants are so supportive and welcoming, and a number of them have been with us for the entire 40 years."

She added, "There are so many good classes at the Weeks Center – with certified instructors – along with a nice little fitness room with a Personal Trainer. It's been a joy, working alongside the outstanding staff with my fellow instructors and meeting so many wonderful people."

Her work at the activities center has largely focused on people of retirement age, while her Aiken Community Theatre years have largely been dedicated to adolescents and teenagers.

"Nancy has done most key jobs around the theater at one time or another, but her primary claim to fame is the rebuilding and continuing to build our youth wing program," said Thurmond Whatley, ACT's facility director.

"She's been the executive director for quite a few years. She stepped down after a lot of years of service and is now a teacher within the organization. For nine months out of the year, she directs a youth wing show fairly regularly, and she's just amazing with teenagers," Whatley said.

Whatley added that Hansen's service on ACT's board of directors includes consistent contribution of great ideas – concepts that are "always presented politely, but you can tell she's put a lot of thought into them."

Hansen has also put plenty of thought into her ancestry, noting that her father, a physician, was the child of Italian immigrants. "It's easy for people to forget those roots," she noted.

As for her young neighbors with strong potential for time on stage, she noted that ACT offers "a fabulous youth program," with free workshops on the second Saturday of each month from September to May. Outreach is to kids from grades four through 12.

"Gaining confidence in one's speaking skills, talking in front of an audience, staying calm when things go 'off script' can benefit kids in all aspects of their lives – no matter what paths they take," she added.

She also noted, "Directing 'The Big Debate' was a huge honor for me – I am so proud to have been a part of Voices & Votes and to have worked with such a talented playwright and cast about the critically important topic of voting rights. Dream come true!"

"Nancy is very passionate about theater and understands how theater really connects people," said Kyle Seconi, ACT's executive director. He said he was particularly impressed with Hansen's ability to bring together people from a wide variety of backgrounds and help them work successfully in a stage production.

"She's very passionate about what she does, and very giving and brilliant, and we love her," Seconi said, noting that her current support reaches into such areas as dialect and movement, along with many aspects of theater. "If you've ever seen her act on stage, she's brilliant. That's her in a nutshell."

Fitness instructor Joy Donovan chose the words "caring" and "conscientious" to describe Hansen. "She is such a caring, conscientious person, and she's very thorough."

She also described Hansen as "very dedicated and loyal to whatever she takes on," and noted that Hansen also collaborates frequently with such instructors as Evelyn Beck and Kristi Whitley. Hansen was honored in January with a surprise party on the occasion of her 40th anniversary of teaching fitness at Odell Weeks.

"She's just a gem of a person. I was glad to make her acquaintance when I started my Pilates class, because we worked as a team," Donovan said, acknowledging excellent teamwork among Hansen, Beck, Whitley and Donovan.

"It's really a pleasure to work with Nancy and the other girls. Nancy has that extra-special touch. She will give like 200% to make sure people get a good workout, they're comfortable, and they're greeted and welcomed into the class, and it's like that with anything she does."

Hansen, in summarizing the past several decades, wrote, "My life here in Aiken has been full and rewarding. I've been so fortunate by having the family I was born into and the family that my husband and I were gifted with. Then to have so many generous and supportive people all along the way - people who accepted me, taught me, and tolerated me. Well, it's been great and I'm a fortunate person indeed."