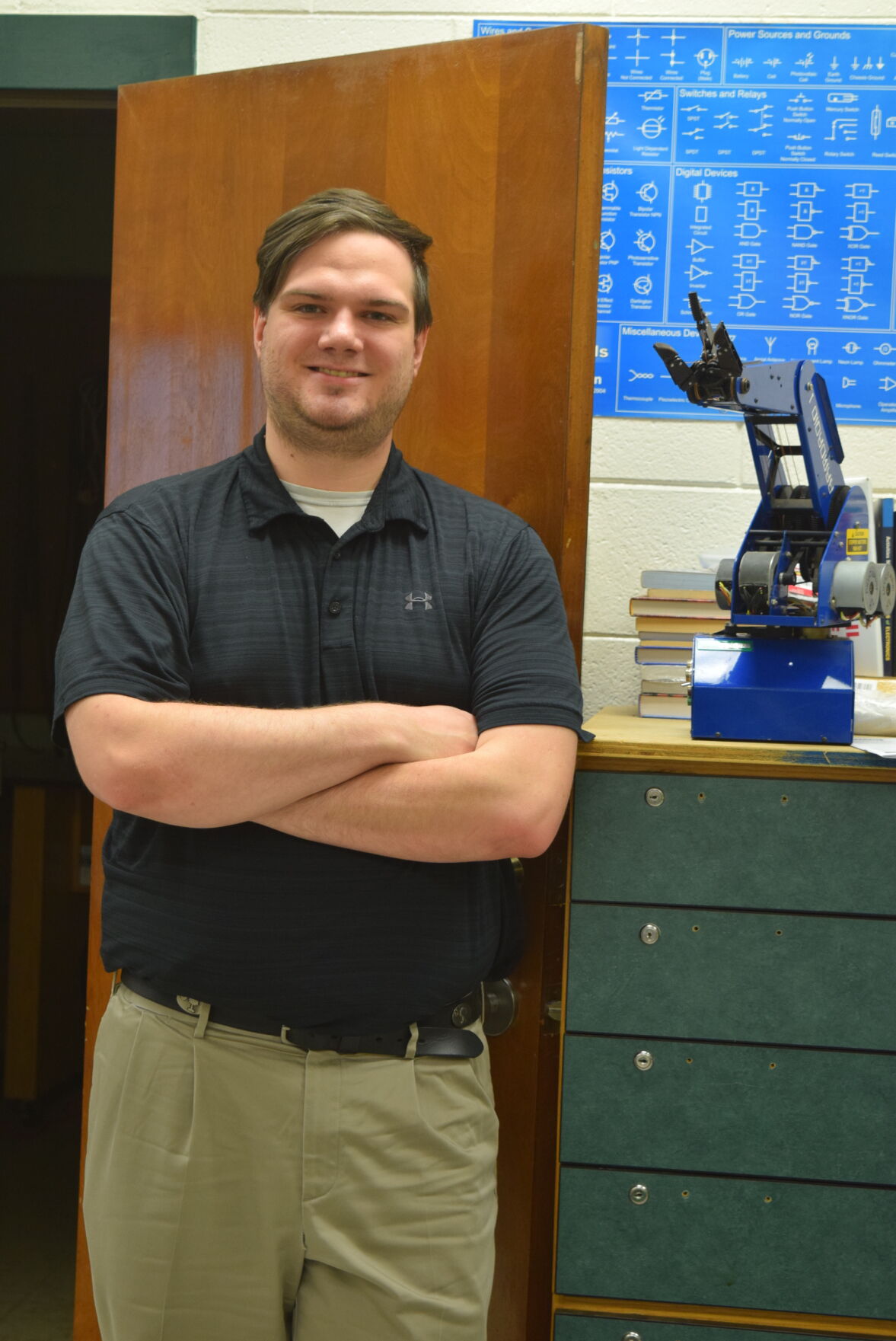 John Fogarty is the head coach of the M'Aiken Magic robotics team. Helping kids develop an interest in STEAM – science, technology, engineering, arts and math – subjects is one of Fogarty's goals. 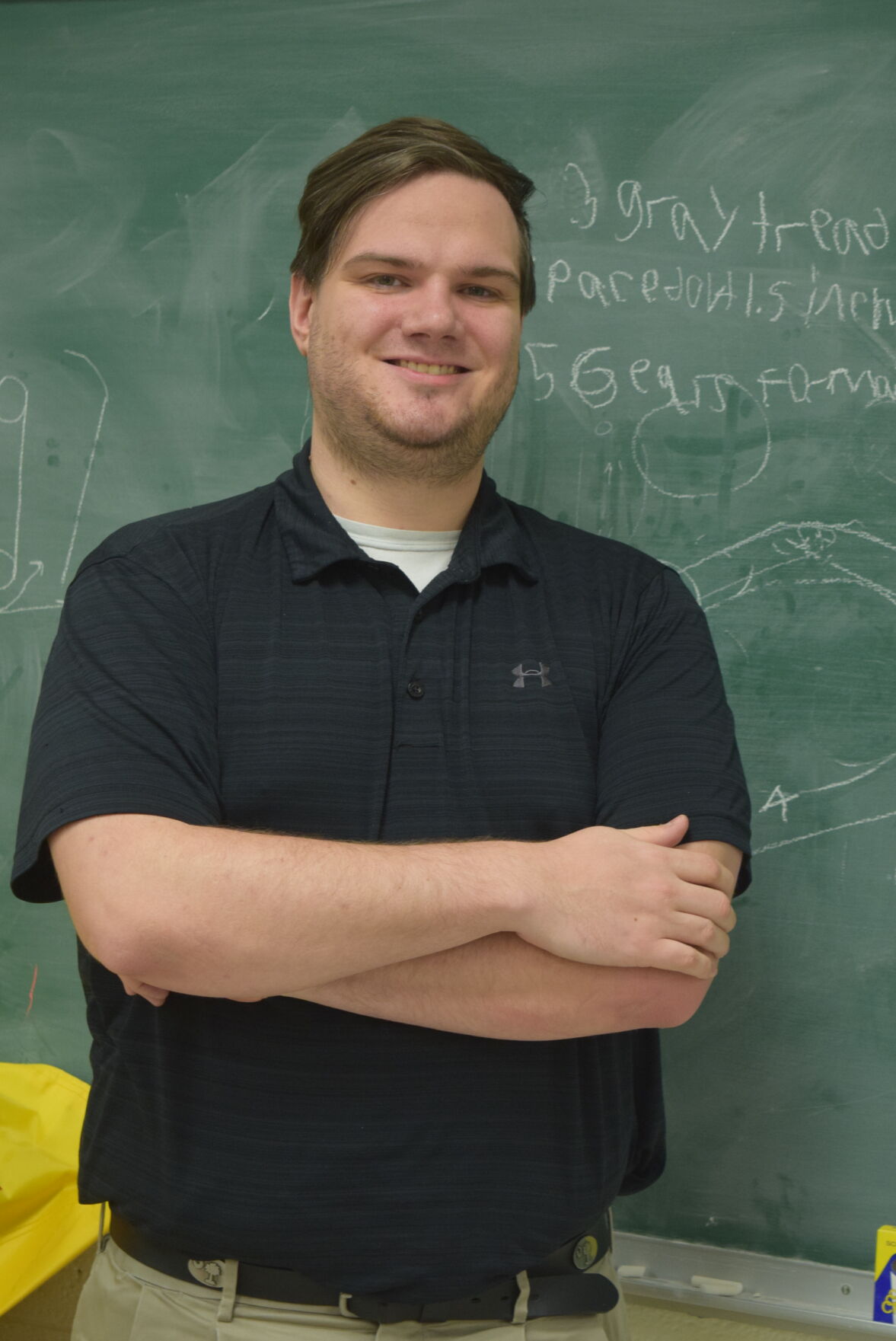 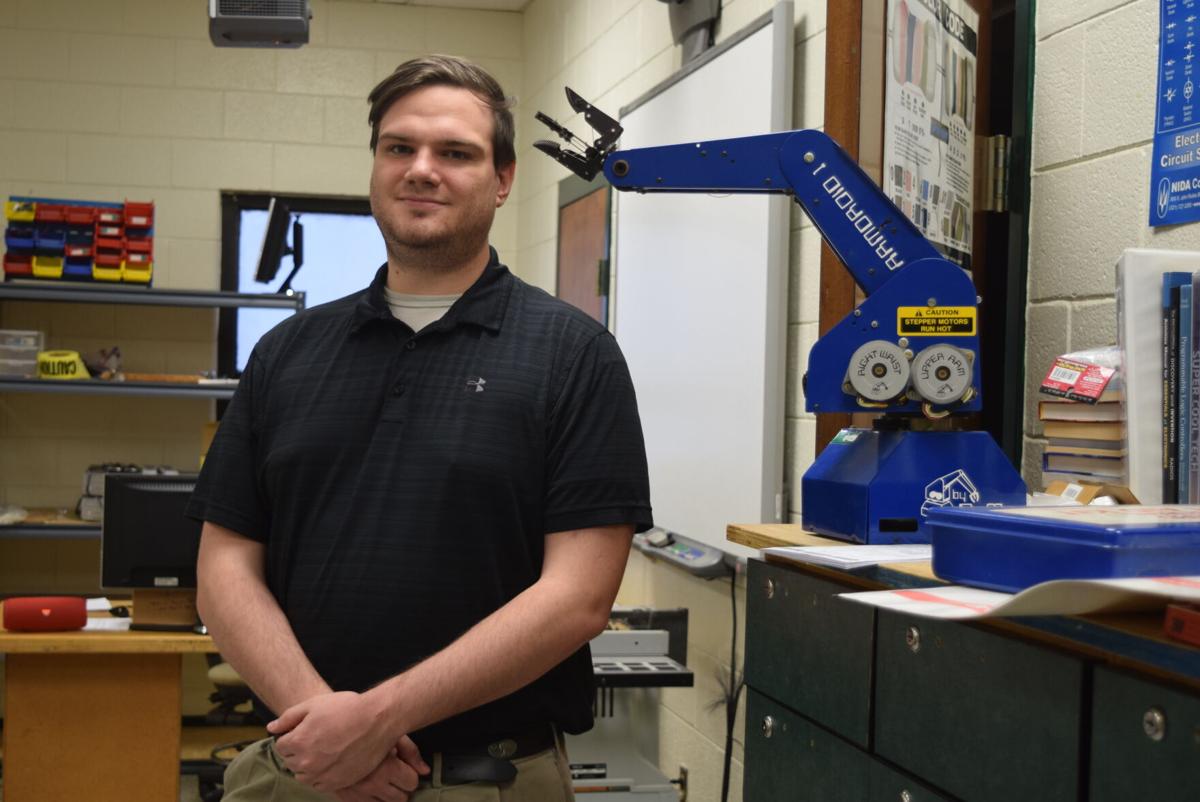 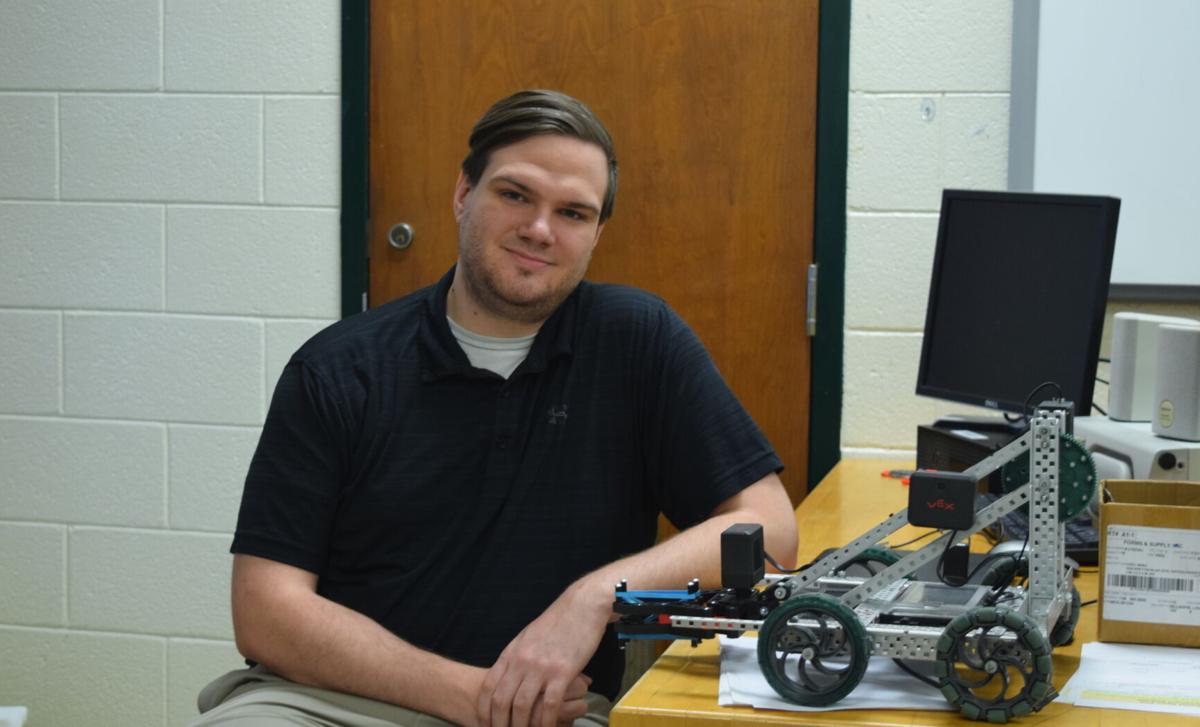 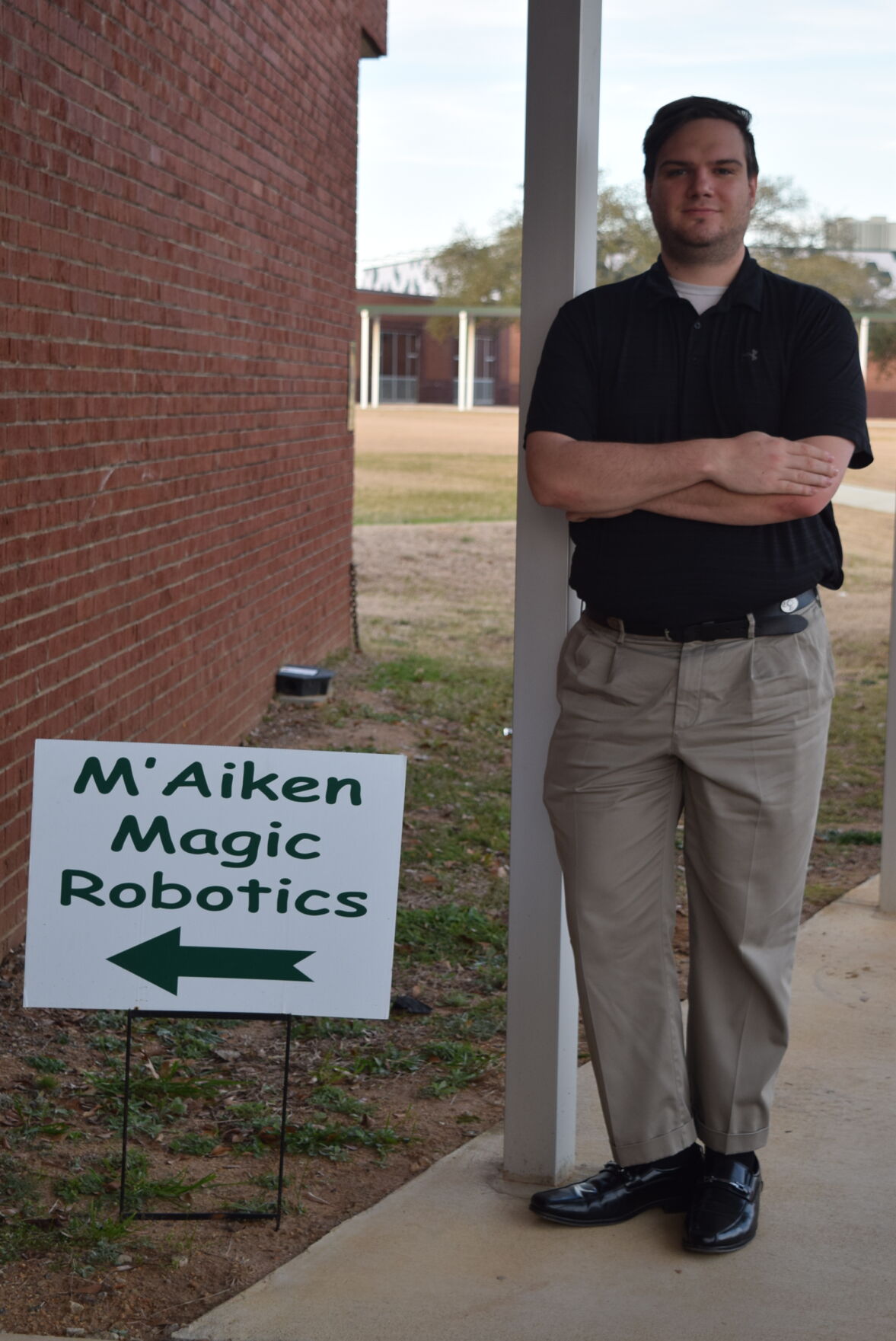 John Fogarty is the head coach of the M'Aiken Magic robotics team. Helping kids develop an interest in STEAM subjects is one of Fogarty's goals.

John Fogarty is the head coach of the M'Aiken Magic robotics team. Helping kids develop an interest in STEAM – science, technology, engineering, arts and math – subjects is one of Fogarty's goals.

John Fogarty is the head coach of the M'Aiken Magic robotics team. Helping kids develop an interest in STEAM subjects is one of Fogarty's goals.

Two minutes. Weeks of learning, building and practicing come down to two minutes. Small robots, controlled by teenagers, compete to score the most points in a game that changes every year. Even for the most prepared team, everything can go wrong.

M’Aiken Magic, a local robotics team in Aiken, won the FIRST Tech Challenge world championship in 2010, when current head coach John Fogarty was a student. He described the bite-sized games as both highly stressful and exciting.

“I can vividly remember every moment of the match that we played when we won the world championship … because of the fact that things were not going the way I wanted them to, and so I had to improvise,” Fogarty said.

Fogarty, now 26, has taken on a mentoring and coaching role with M’Aiken Magic after spending his middle and high school years in the organization.

During the day, Fogarty works as a software engineer for TaxSlayer. He spends roughly 15 to 20 hours each week at Aiken High School, where M’Aiken Magic is based.

“It’s just tons of fun. I mean, some people like to build birdhouses and build racecars and stuff at their house … and I’m like, I’d rather come here and build robots with some high school kids,” Fogarty said. “I enjoyed it so much as a student, that’s part of the reason why. I get as much thrill out of the competition, even though I’m not the one driving anymore.”

Both of these competition leagues are international, with students competing from all over the world.

Fogarty said there are usually about 20 to 30 kids participating in M’Aiken Magic every year.

“Even if you’re not going to go into engineering or STEM, necessarily, as a career path for the future, it’s extremely beneficial, the stuff that you learn. And the problem-solving skills you get from it. Even communication skills,” Fogarty said.

Growing up in Aiken

Although his parents hail from New York City, Fogarty was born and raised in Aiken. He attended Byrd Elementary, Aiken Middle School and Aiken High School before studying at USC Aiken and the University of South Carolina.

Fogarty’s passion for robotics started when he was young.

The best of John Fogarty

Growing up, he enjoyed playing with LEGOs and building things. His father gave him a book called “How Computers Work,” sparking a lifelong interest in computers and engineering.

Fogarty’s mother was a major influence in his path toward STEM – an acronym for science, technology, engineering and math. Currently a teacher at North Aiken Elementary School, she had studied computer science and continues to be involved with M’Aiken Magic as a mentor, Fogarty said.

“I’m pretty positive that if it wasn’t for growing up exactly where I am, I wouldn’t have gotten into robotics like I am,” Fogarty said, explaining that not every school offers a FIRST robotics team.

FIRST is an acronym meaning For Inspiration and Recognition of Science and Technology.

"FIRST inspires young people to be science and technology leaders and innovators by engaging them in exciting mentor-based programs that build science, engineering, and technology skills, that inspire innovation, and that foster well-rounded life capabilities including self-confidence, communication, and leadership," according to firstinspires.org.

If you asked a much younger Fogarty what he wanted to do with his life, he might’ve told you he would become a band director.

"I was big into music at first. I joined the band program and everything," Fogarty said. "I played a lot of things, but primarily, I started out playing trumpet because that's what my dad played, so it just seemed like the right fit for me."

But engineering prevailed as Fogarty’s chosen career path as he continued competing in robotics competitions with M’Aiken Magic.

In addition to learning new things, the program offered a fun environment and friendships.

“I feel like, because of the friends I made when I joined the robotics team, I became a lot more open and friendly to people,” Fogarty said, adding that he feels he became a better student over time, as well.

Half a year ago, the VEX team moved to its own room at Aiken High School. Fogarty said the team had been sharing facilities with an architecture and engineering class.

“We’ve finally proven that we’re worth it. I always knew we were,” Fogarty said, laughing.

It's an older part of the campus. On the walls, old motivational posters and warnings about chewing gum hang like historical relics. There's a chalkboard – not a newfangled whiteboard – but Fogarty said this saves money on dry-erase markers.

The room is equipped with parts, tools, students' projects, STEM textbooks and at least two college-level dictionaries. A practice arena houses the current team project, a robot that can stack colored balls into tiered containers.

A closet in the back houses trophies the team has won over the years. As both a student and a mentor, Fogarty has played a part in many of the team's successes.

Despite his years of involvement with M’Aiken Magic, he had not planned to take on the head coaching role.

“My initial plan wasn’t to be the head coach of the team. I just wanted to be a supporting member … it just so happened that the mentor in charge wanted to go back to get his doctorate, so somebody needed to take over the reins. And I said, ‘OK, I guess so,’” Fogarty said with a laugh.

Fogarty said he teaches the students by example, demonstrating the tasks they need to learn step-by-step.

Starting small is important before diving into the more technical details. Even as a professional software engineer, Fogarty said he still learns by example, even just as a starting point.

Students on the team learn real-world skills as they build functional robots for competitions.

“The programming involved with making these robots work is industrial-grade kind of programming. You’re learning a real programming language – it’s C++. That gives the students interested a real window into the future of what their career could look like if they’re interested in that kind of work,” Fogarty said.

From an outsider’s perspective, the process may seem daunting. However, Fogarty said the program never turns a student away. No experience is required to join M'Aiken Magic.

One exciting aspect of the program is experiencing and learning new things every year, Fogarty said. The team is able to try things that may not be feasible in a more industrial environment.

“We get to think more outside the box here, and sometimes that leads us to really cool stuff that you wouldn’t see anywhere else,” Fogarty said. “As an example, there is a drive system that – you’ll see it one day – where each wheel on a robot is independently steered so that they can turn 360 degrees, and that basically allows your robot to drift sideways and spin at the same time. No car or anything else you’ve ever seen does that.”

Coaching the robotics team is not just about teaching and mentoring. The group needs updated equipment and money for travel, which Fogarty said is made possible by fundraising and donations from people and local companies.

Reaching out to students who might not typically consider joining a robotics team is one of Fogarty’s goals.

“I’ve seen, firsthand, some of the kids who have never built anything in their lives, and they’re like, ‘Wow, this is cool. I want to do more of this,’” Fogarty said. “I guess it’s showing them the cool factor of it. Because you ask a kid what they want to be right now, in middle school, and you might get half of them want to be Twitch streamers, or TikTok stars and YouTubers.”

Outside of robotics, Fogarty still enjoys music, playing guitar and piano. He also enjoys working on cars in his spare time, and he’s interested in getting into racing.

Fogarty might start a business of his own in the Aiken area someday.

“I’d love to get into building robot parts, or just construction and fabrication using mechanized fabrication in the future. There’s tons of demand for it, I mean, you’ve got machine shops all over the place,” Fogarty said.

In the meantime, Fogarty plans to continue expanding the M’Aiken Magic program.

Since becoming a mentor, Fogarty has had alumni who went on to attend Clemson University, the University of South Carolina and more. He said he often checks back with former students to see if they need anything, such as help finding new work.

“I want every student that comes through our program to do as well as they want to, to achieve whatever goals they have for themselves,” Fogarty said.

Fogarty said building and expanding the program – gaining more mentors, providing more opportunities for students at different schools – will be a long and difficult process. However, he is committed to making it happen.

Blakeley Bartee covers the education beat at the Aiken Standard. She graduated from Georgia Southern University in 2020. You can follow her on Twitter: @blakeleybartee.