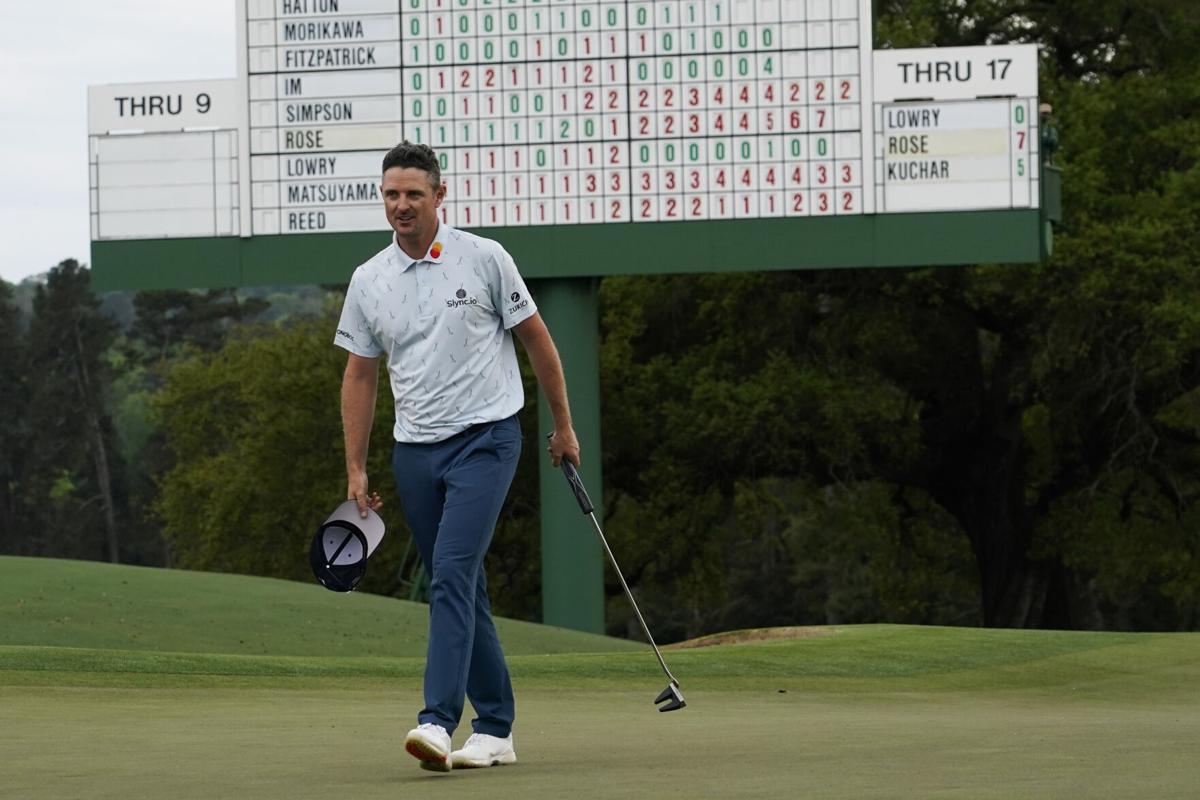 Justin Rose walks off the 18th hole after finishing the first round of the Masters at 7 under. Rose is four shots clear of the field. (AP Photo/David J. Phillip) 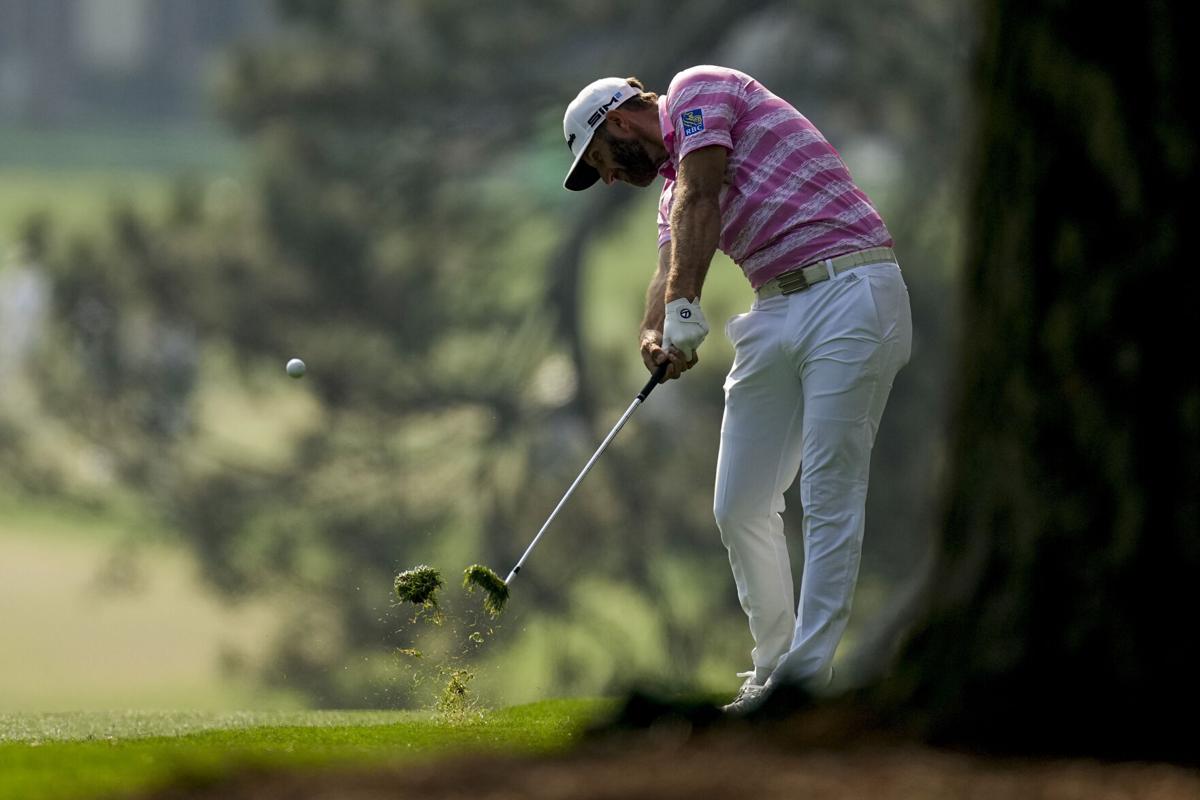 Dustin Johnson hits on the first fairway during the first round of the Masters. The defending champion opened the tournament with a 74. (AP Photo/Matt Slocum)

Justin Rose walks off the 18th hole after finishing the first round of the Masters at 7 under. Rose is four shots clear of the field. (AP Photo/David J. Phillip)

Dustin Johnson hits on the first fairway during the first round of the Masters. The defending champion opened the tournament with a 74. (AP Photo/Matt Slocum)

AUGUSTA — Walking off the seventh green at 2-over par Thursday, Justin Rose wasn't quite ready to press the panic button.

Sure, that's not the start anyone wants at the Masters, but there was still a lot of golf remaining – for the day and for the week.

Rose walked to the eighth tee and then produced one of the finest stretches in tournament history, playing the final 10 holes in 9 under for a 7-under 65. His career low at Augusta National Golf Club gives him a four-shot lead, the second-largest in Masters history, over Brian Harman and Hideki Matsuyama heading into Friday.

"I kind of knew 2 over through 7 is not the end of the world, but also knew you're going in the wrong direction," he said. "You can't win the golf tournament today. Even with a 65, you can't win it today. You can only probably lose it today, obviously."

An eagle on the par-5 eighth calmed Rose down and got him back to even par, and then a birdie on 9 suddenly had him considering his front nine a job well done.

He was only getting started.

Just 12 of 88 players are under par and the scoring average was 74.52, and Rose said the conditions had him feeling that Thursday wasn't going to be the day for someone to post a low number.

He was the only one who did.

Matsuyama (69), Webb Simpson (70) and Marc Leishman (72) were the only other players to reach 4 under – Leishman getting there through eight holes – but each gave shots away late to keep from being any closer to Rose.

"I putted the ball beautifully and read the greens unbelievably well," he said. "If you had said to me walking up the eighth hole, I'd have said no chance, this course is playing a little too tricky for that. But it's incredible. It's a good reminder that you just never know what can happen out there, just to stick with it on the golf course."

It's the fourth time Rose has held the 18-hole lead at the Masters, but only in 2007 did he turn that into a top-20 finish. He tied for fifth that year in unseasonably cold and windy conditions, and he tied for 22nd in 2004 and tied for 36th in 2008 because he couldn't avoid the big number.

"But I've had some situations in my career that should stand me in good stead," he said, "but listen, I think to keep the expectations relatively low even in this situation is not a bad thing for me for the remainder of the week and just keep it one shot at a time, keep committing on this golf course, you can never get ahead of yourself on, we've seen it many times around here."

Harman (69), making his third Masters start, kept his scorecard clean and made just one bogey. Thursday was a continuation of the strong play he had to produce in recent weeks just to get into the field – he was one of the last to receive an invitation after climbing into the top 50 in the Official World Golf Ranking.

Simpson, rookie Will Zalatoris, Christiaan Bezuidenhot and 2018 champion Patrick Reed are all five shots back at 2 under, followed by a group of five at 1 under that includes a resurgent Jordan Spieth.

Kevin Kisner is part of a group of seven at even par.

"I feel sorry for the guys' first Masters in November, and then they're walking out there today wondering what the hell is going on for sure," he quipped.

Defending champion Dustin Johnson, one of the tournament co-favorites who set the Masters 72-hole scoring record in November, was 1 under after birdieing 13, but he bogeyed 16 and doubled 18 for a 74 and an early nine-shot deficit.

Fellow co-favorite Bryson DeChambeau (76) again tried to bomb his way around Augusta National but kept blasting himself into trouble off the tee.

It was another roller-coaster round for Spieth, the 2015 champion who last week snapped an 82-start winless streak. He tripled 9 after driving it into the trees and then hitting a punch shot directly into another one, but recovered with a birdie at 10 and an eagle at 15.

It's an emphatic start for Rose, but he's well aware anything can still happen. Johnson, Spieth and Bubba Watson (2014) are the only players since 2010 to trade in a first-round lead for a green jacket.