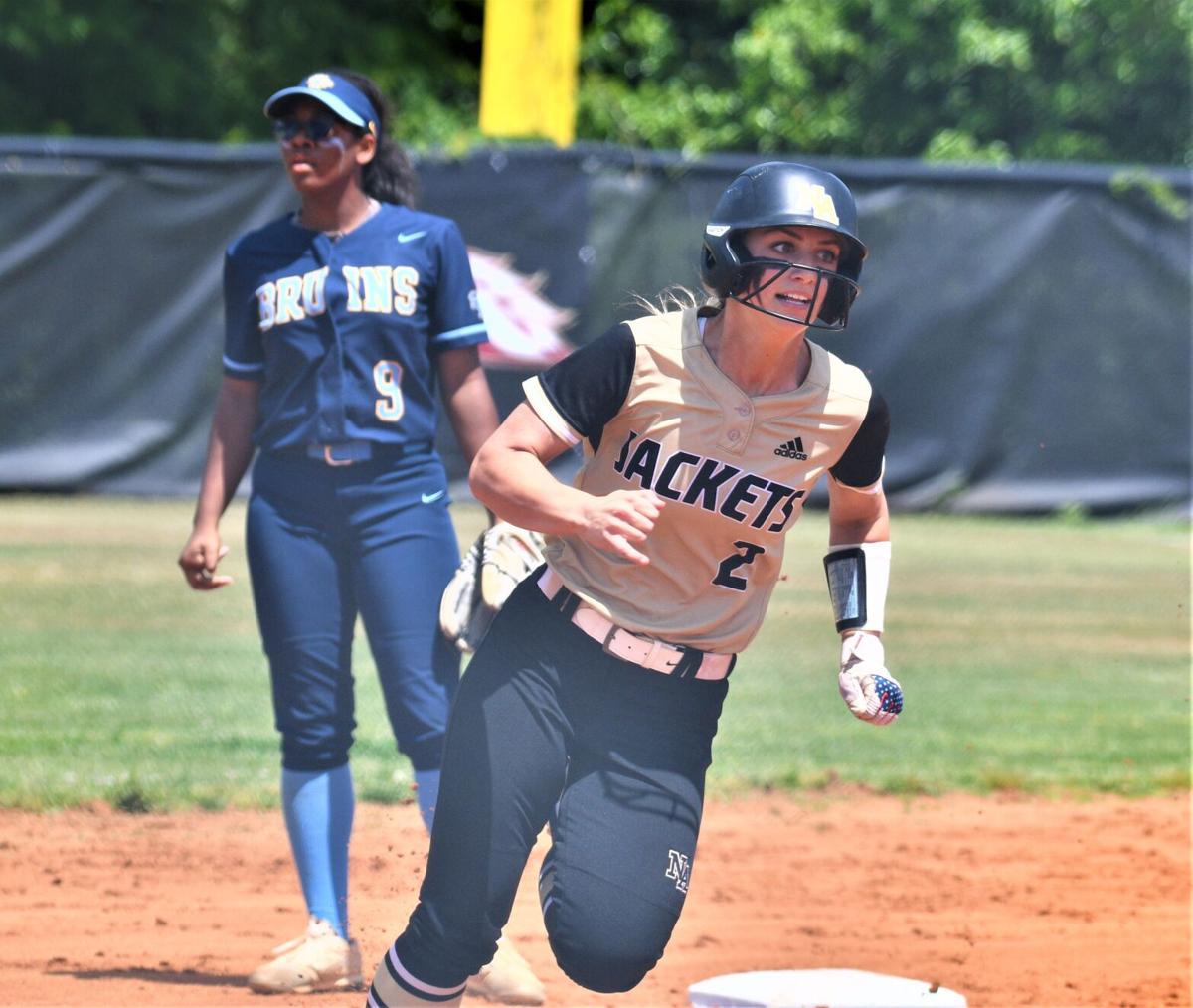 North Augusta's Audri Bates makes her way to third base for a triple during the Jackets' Class AAAA Lower State softball game against South Florence. 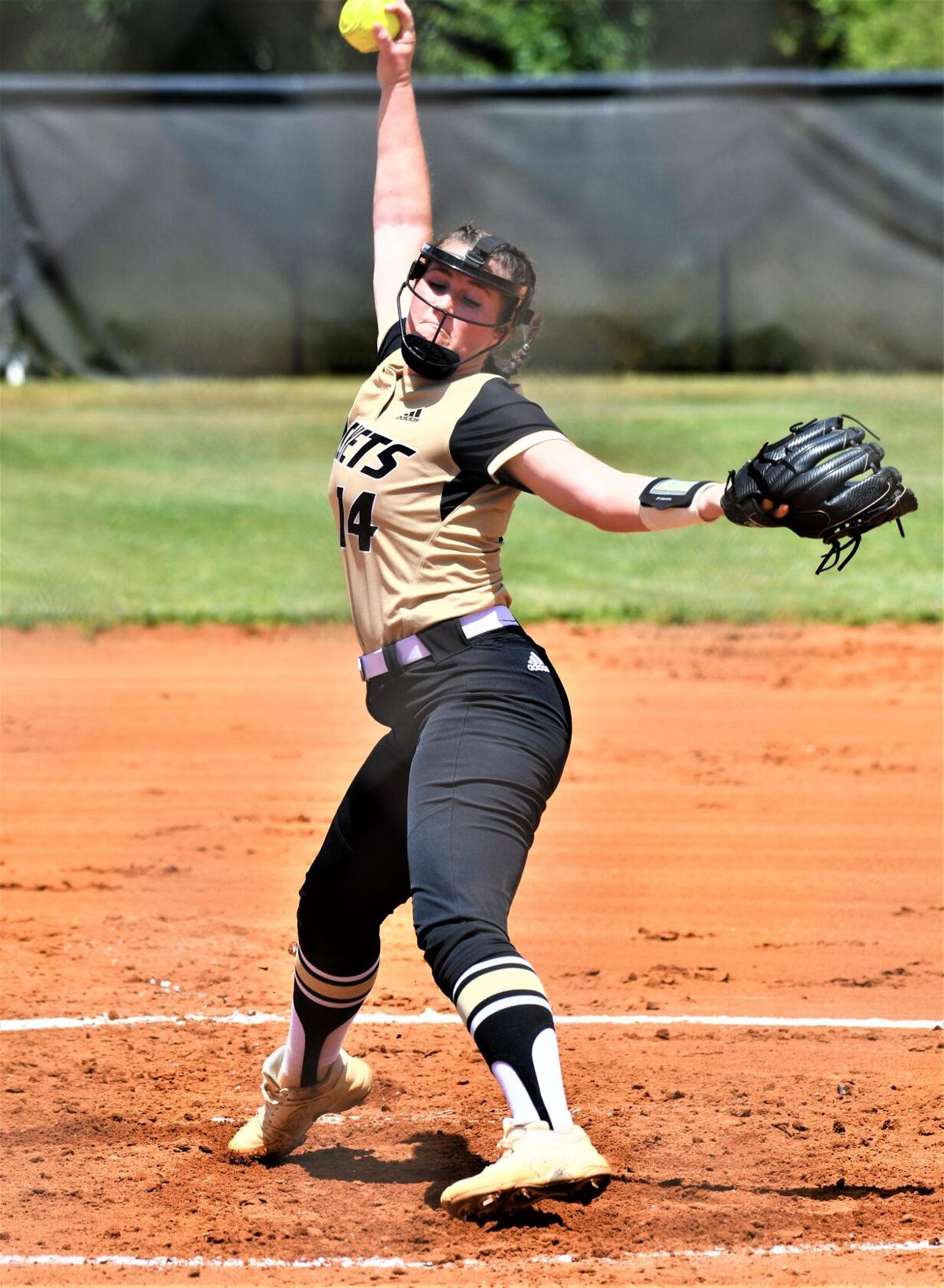 North Augusta's Katelyn Cochran struck out 15 batters and allowed just three hits, but a late error cost the Jackets in a 2-1 loss to South Florence in the Class AAAA Lower State tournament.

North Augusta's Audri Bates makes her way to third base for a triple during the Jackets' Class AAAA Lower State softball game against South Florence.

North Augusta's Katelyn Cochran struck out 15 batters and allowed just three hits, but a late error cost the Jackets in a 2-1 loss to South Florence in the Class AAAA Lower State tournament.

Especially not at this point in the season.

The keys to playoff success are no secret for the Yellow Jackets - make outs when presented with the opportunity, and continue to hit at the scorching pace that had contributed to a 27-1 record and had gotten them to the Class AAAA Lower State tournament.

Neither of those things happened Saturday, and now the Jackets are on the brink of elimination. South Florence turned a late error into two runs and held North Augusta to just four hits in a 2-1 win, spoiling another brilliant outing from pitcher Katelyn Cochran and ending the Jackets' 23-game win streak in a game postponed from Friday and played at South Aiken instead of the Jackets' home field at Riverview Park.

"We've harped on it from the beginning of the year," Gilstrap said. "You cannot give a team extra outs. We flub a bunt in the sixth inning, then the top of the order gets to come back up and as a result they end up getting two hits and two unearned runs, and they beat us. (Cochran) pitched her heart out, had 15 strikeouts, gave up three hits, and we lose the game. You can't do that in the playoffs. It's unacceptable. And we have to hit the ball better, too. We can't get four hits and win a game in the playoffs, either."

The top of the sixth is where it went wrong for North Augusta's (27-2) defense. A dropped ball at first base on a bunt attempt put the leadoff batter aboard before Cochran got two quick outs. However, that error to start the inning meant the Bruins' (15-7) top of the order would come back up, and No. 2 hitter Keke Fulton made the Jackets pay with a triple to the wall in left field to tie the game at 1 apiece. MaKayla Arceneaux was next at the plate and promptly singled up the middle, putting South Florence ahead 2-1.

The Jackets were quickly retired in the bottom of the sixth, and a Kadence Adams infield single was all they could muster in the seventh. The game ended when Haidyn Hutto's hard line drive to third was caught, then thrown back to first for a double play.

Now the Jackets will have to fight their way through the losers' bracket. They'll host West Florence on Monday, while South Florence will face Hartsville in the winners' bracket.

"We've just got to make plays. We'll get on the field and hit a little bit tomorrow. We've just got to relax," Gilstrap said. "We've been in this situation. We've played some really good teams. We played five games in one day. We played five games in two days. We've played a lot of games. We'll just have to be road warriors now and do it that way if we want to win it."

North Augusta got on the scoreboard in the bottom of the fourth when Audri Bates ripped a triple down the third base line, then scored when Nevaeh Ross followed that up with a sacrifice fly.

There wasn't much more offense than that for a team averaging more than 10 hits and nearly 9 runs per game. South Florence pitcher Payton Perry retired the first seven batters she faced, and she only allowed four hits (three singles) against North Augusta's powerful offense.

Still, the one run was almost enough run support to get Cochran the win. She struck out 15, including a stretch of seven in a row, and was untouchable for most of the game.

"She's a good leader. She works hard. She's always wanting to win for the team. She's always picking her teammates up," Gilstrap said. "Even when we made an error or booted a couple of balls, she was still trying to keep them to just keep their head up. That was a lot of wins in a row up there, so we've got to regroup."

To advance to the state championship series, North Augusta will need to beat West Florence on Monday, beat the Hartsville-South Florence loser on Wednesday and then beat whoever wins that game twice on Friday. It's a tall order, but Gilstrap loaded his team's schedule with tournaments and tough opponents for a reason - and the Jackets know all too well that it's possible for a team to advance after losing the first game.

"(Darlington) did that to us last year. We beat them, and then they came back through the losers' bracket and beat us twice on a Friday to advance," Gilstrap said. "It's been done several times. Lugoff-Elgin won a state championship last year by doing the exact same thing. They came back. If we can take care of business and win one game at a time, we'll be right back in this thing."