Residents aged 70 and older can sign up for COVID-19 vaccine in Aiken today. Here's how. 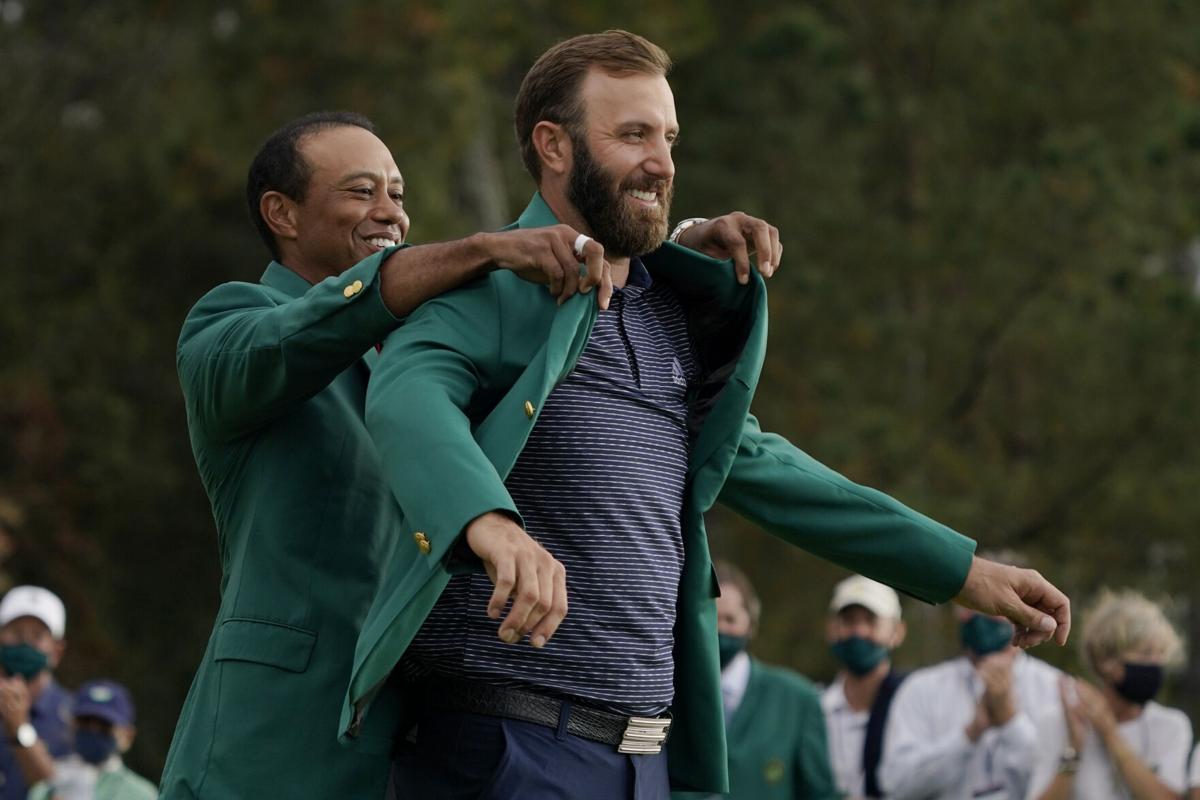 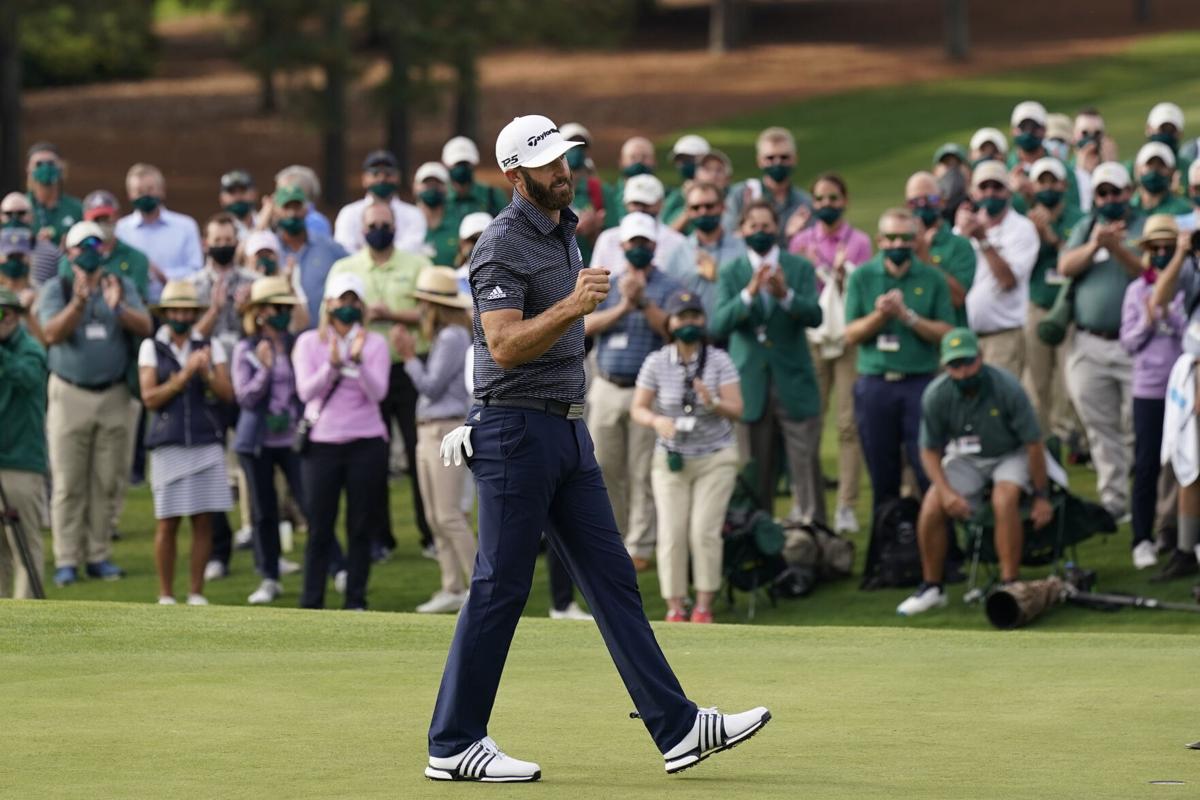 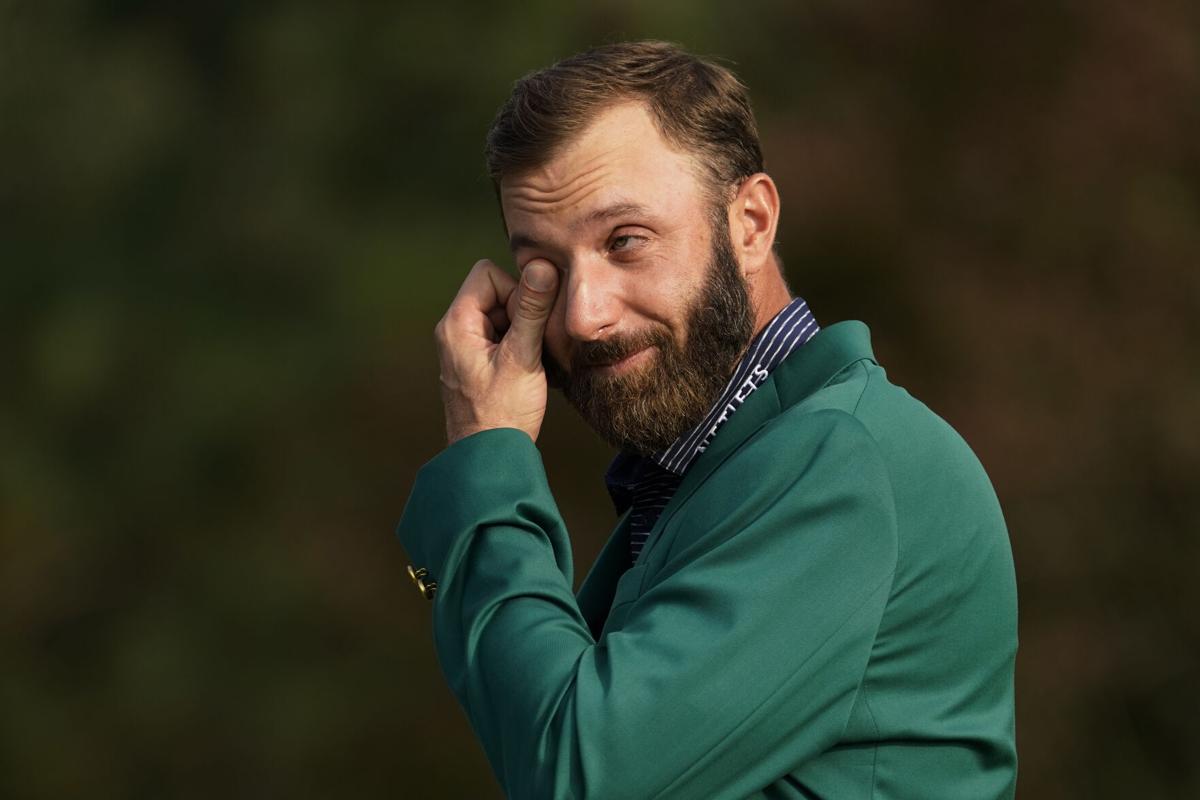 Masters golf champion Dustin Johnson wipes away a tear while being interviewed following his victory Sunday, Nov. 15, 2020, in Augusta, Ga. 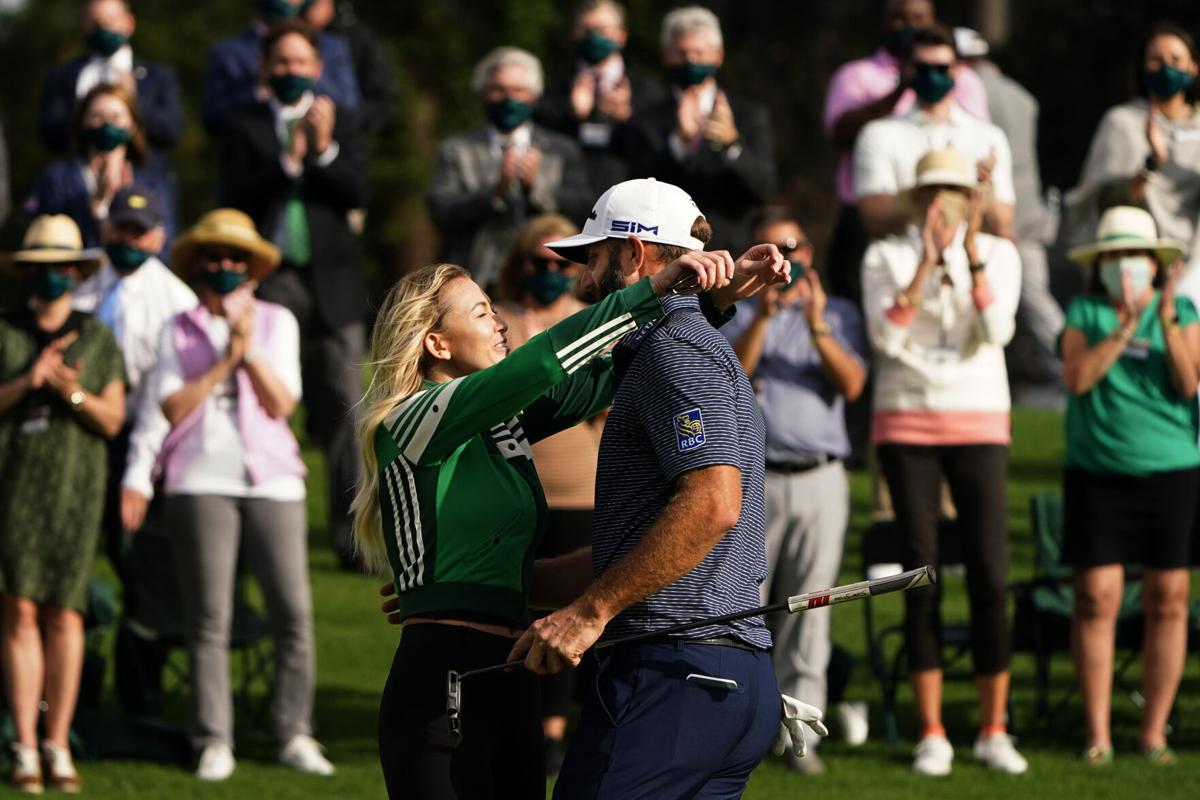 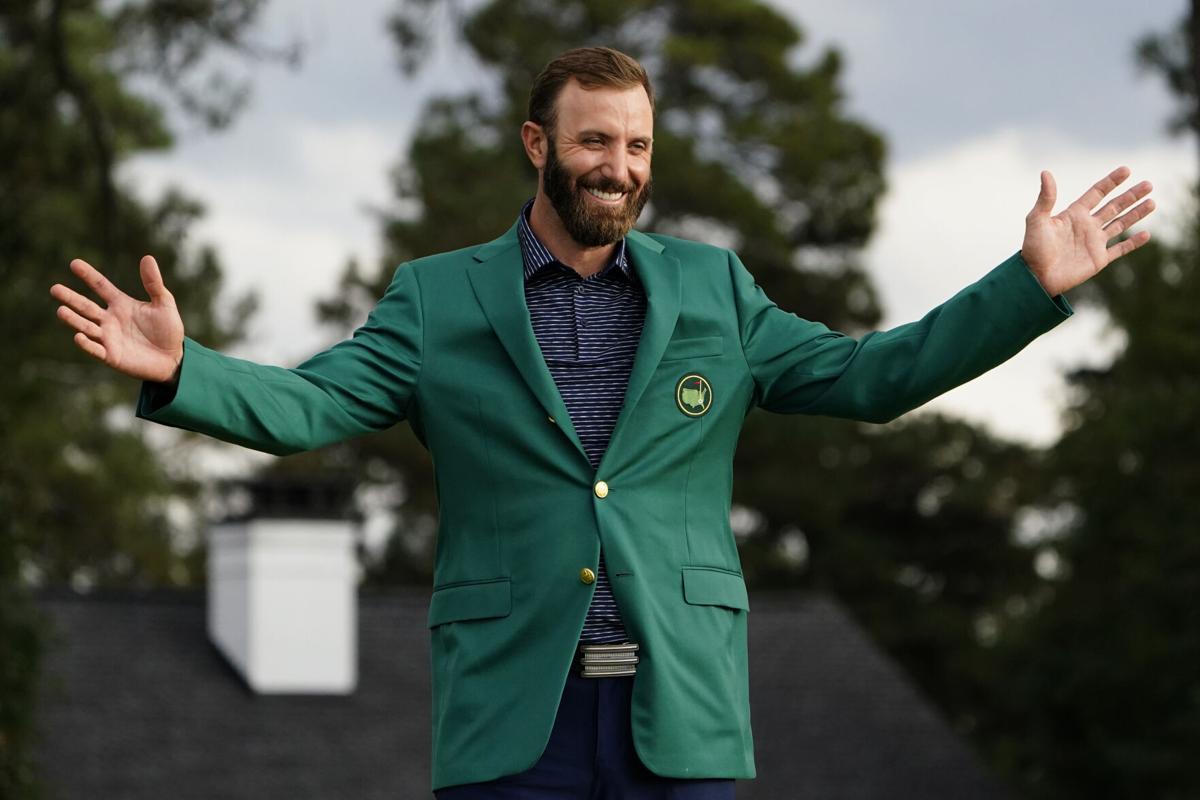 Masters golf champion Dustin Johnson wipes away a tear while being interviewed following his victory Sunday, Nov. 15, 2020, in Augusta, Ga.

AUGUSTA — Dustin Johnson finally has the one he always wanted.

The boyhood dreams always took place at Augusta National Golf Club, just a little more than an hour away from his Columbia home.

He'd have a putt to win the Masters – or maybe a chip shot with the tournament on the line. Same with his practice sessions as a junior golfer. Then he'd imagine slipping into the green jacket.

It still felt like a dream to him Sunday when Tiger Woods helped him into the 42 long he always hoped for, only in real life there was no need for a tournament-clinching putt or chip.

He was so good all week that no one could catch him.

Johnson shot a final-round 68 and broke the tournament scoring record previously held by Woods and Jordan Spieth with a 20-under 268 total and a five-shot victory for his second major championship.

"Well, just growing up so close to here, it's always been a tournament that since I've been on Tour, since I played my first Masters, it's been the tournament I wanted to win the most," said Johnson, who led Dutch Fork High School to a state championship in 2002 and played collegiately at Coastal Carolina. "You know, being close the last couple years, finishing second last year to Tiger, this one was just something that I really wanted to do.

"Obviously starting today with a four-shot lead, you know, I knew it wasn't going to be easy. I knew I was going to have to play well if I wanted to win. ... But it was still hard. I mean, I was nervous all day, but I felt like I controlled myself very well. Controlled the golf ball very well in difficult conditions. I felt like the wind was really tricky. The course, the greens were a little bit faster. Felt like you really had to be careful around here today."

Johnson had to be careful, but the rest of the field had to go for broke to try to track him down.

He didn't worry after a few early mishaps, like a chunked chip on 2 and bogeys at 4 and 5. His 8-iron nestled 7 feet from the cup for a birdie on 6, and that calmed his nerves.

Johnson got up and down for a key par at 11 and then hit the green at 12 for a critical 3. From there, he birdied 13, 14 and 15 to reach 20 under – which also ties a major championship record – and lock up the tournament.

After his drive on 17, another cannon blast off the tee, he exhaled deeply. His caddie, brother Austin, asked him on the 18th hole if he knew where he stood.

"I did not. Not exactly," he said. "I mean, I assumed I had the lead, but I didn't know by how many. I mean, that was kind of my goal. I kind of looked at the leaderboard a little bit early, and after that I just, you know, told myself, 'Don't worry about what anybody's doing. Just play as good as you can.'"

He could finally crack a smile after tapping in for par and the win, making official what everyone had known for hours – if not days, or even months.

"Yeah, I thought I'd have a decent shot if I got to Dustin's original score at the start of the day, 16 under," said co-runner-up Cameron Smith, whose 15-under total would have been good enough for an outright win in 76 of the 84 editions of the Masters. "I knew I had to put the pressure on early. Got out of the gates pretty good and DJ was just too good at the end."

Johnson has been the hottest golfer on the planet since a bizarre stretch in July in which he went 80-80 and missed the cut at the Memorial and then shot 78 and withdrew from the 3M Open.

Those wins include two playoff events, one being the Tour Championship which clinched the FedEx Cup, and now the Masters.

The 36-year-old has a famously stoic demeanor, but a win at Augusta National was enough to leak tears through that facade.

"On the golf course, I'm pretty good at controlling my emotions, you know, because I'm out there playing golf. But yeah, I had a tough time speaking with (CBS' Amanda Balionis) on the putting green," he said. "Just because it – like I said, it means so much to me. It means so much to my family, Paulina, the kids. They know it's something that I've always been dreaming about and it's why I work so hard.

"You know, I put in a lot of work off the golf course, and I think it's just – it's something that you push yourself for. That's why I work so hard, is to be in this position. And you know, to finally have the dream come true, I think that's why you see all that emotion."

Johnson looked like a lock for the record books early in the tournament, reaching 10 under through 22 bogey-free holes. The field caught up in peak scoring conditions, and early Saturday Johnson was part of a nine-way tie for the lead.

His bogey-free 65 in the third round separated him from the field, and this time he finally closed out a major after holding the 54-hole lead – he came back from four down for his first major title at the 2016 U.S. Open at Oakmont.

Johnson's major championship heartache is well documented. There was the 82 at Pebble Beach in the final round of the 2010 U.S. Open, the waste-area-turned-bunker that kept him out of a playoff later that year at the PGA Championship at Whistling Straits and the three-putt on the 72nd green at Chambers Bay to lose the U.S. Open in 2015.

He was the favorite coming to Augusta National in 2017 but had to withdraw that Thursday after falling in his rental home and injuring his back. Then last year he was a runner-up to Woods.

Nineteen months later, it was Woods putting the jacket on Johnson.

"Obviously having Tiger put it on was awesome and unbelievable and, you know, you couldn't – you wouldn't want it any other way. But any guy could put it on me and I'd be just fine," he joked.

Abraham Ancer was in the final group with Johnson and finally started to look like a Masters rookie after shooting in the 60s in each of his first three rounds. Ancer knew he couldn't keep up with Johnson off the tee and tried not to watch, and his inexperience showed in a final-round 76 to tie for 13th.

"I knew it was going to be really hard to beat him because he was definitely four strokes ahead and I knew he was going to make birdies, and I just didn't really play my game, and that's kind of how it happened," he said.

Johnson tested positive for COVID-19 last month and had to quarantine for 11 days in Las Vegas. It came at a time when he knew it wouldn't keep him out of the Masters, and he made it back to competition and showed he was still in top form.

He was a co-betting favorite this week, even if he didn't receive the same attention as Bryson DeChambeau. He shared the lead after each of the first two rounds, then over the weekend showed why he's the top-ranked player in the world.

"Honestly it still feels like a dream," he said. "As a kid, dreaming about winning the Masters, having Tiger put the green jacket on you, it still seems like it's a dream. But I'm here, and what a great feeling it is. I couldn't be more excited."