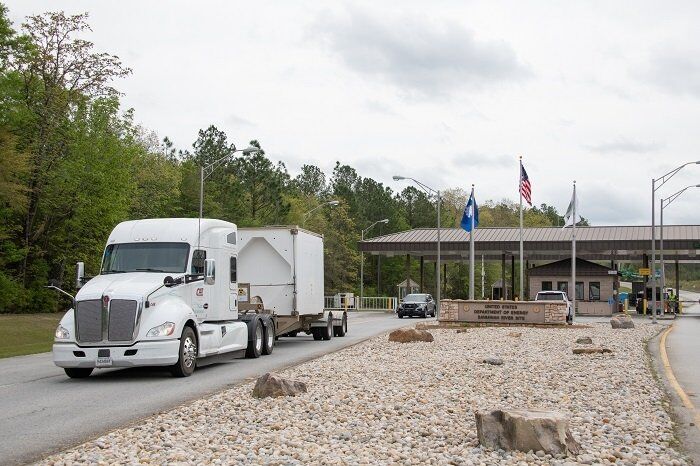 Editor's Note: The Aiken Standard published a story Saturday that said the last of the legacy transuranic waste had left the Savannah River Site. The Department of Energy said it was not the last shipment, but rather the April shipment was the last using a specific type of transportation cask.

The Savannah River Site is finished using the the TRUPACT-III casks to transport its transuranic waste to the Waste Isolation Pilot Plant in New Mexico.

The Department of Energy Office of Environmental Management announced Tuesday that the 239th and last shipment of legacy transuranic waste using the casks arrived at the Waste Isolation Pilot Plant in New Mexico on April 14.

The Waste Isolation Pilot Plant, known as WIPP, is an underground salt mine in New Mexico used for the disposal of transuranic waste. Over time, the salt being formed seals the rooms that the waste is stored in.

“We are pleased to see the last of the legacy transuranic waste TRUPACT-IIIs arrive safely in its final disposition location,” Savannah River Site Management representative Kerri Crawford said in a news release. “This effort has involved a lot of time, effort and coordination between SRS and WIPP representatives and couldn’t have happened without the great teamwork between the two sites.”

“Each milestone reached gets us closer to completing EM’s mission of environmental remediation,” said Ken Princen, assistant manager for the National Transuranic Program for the Office of Environmental Management's Carlsbad Field Office. “The Carlsbad Field Office looks to build on the success of this campaign as we continue to safely dispose of transuranic waste at WIPP in the future.”

In all, the shipments moved more than 11.4 million pounds and traveled more than 347,000 miles.

The shipments began Aug. 24, 2011 when the first shipment left the Savannah River Site for New Mexico. A team of drivers takes the waste straight to the site in New Mexico, only stopping for fuel, bathroom breaks and official inspections.

Each shipment was monitored by a satellite tracking system.

The waste was shipped in Transuranic Package Transporter Model 3 (TRUPACT-III) shipping casks that were invented to move the waste more efficiently from Department of Energy sites to the New Mexico project. They are 8 feet square, 14 feet in length and weight 55,000 pounds. Each cask contains up to 7.4 cubic meters of transuranic waste which is equivalent to 35 55-gallon drums.