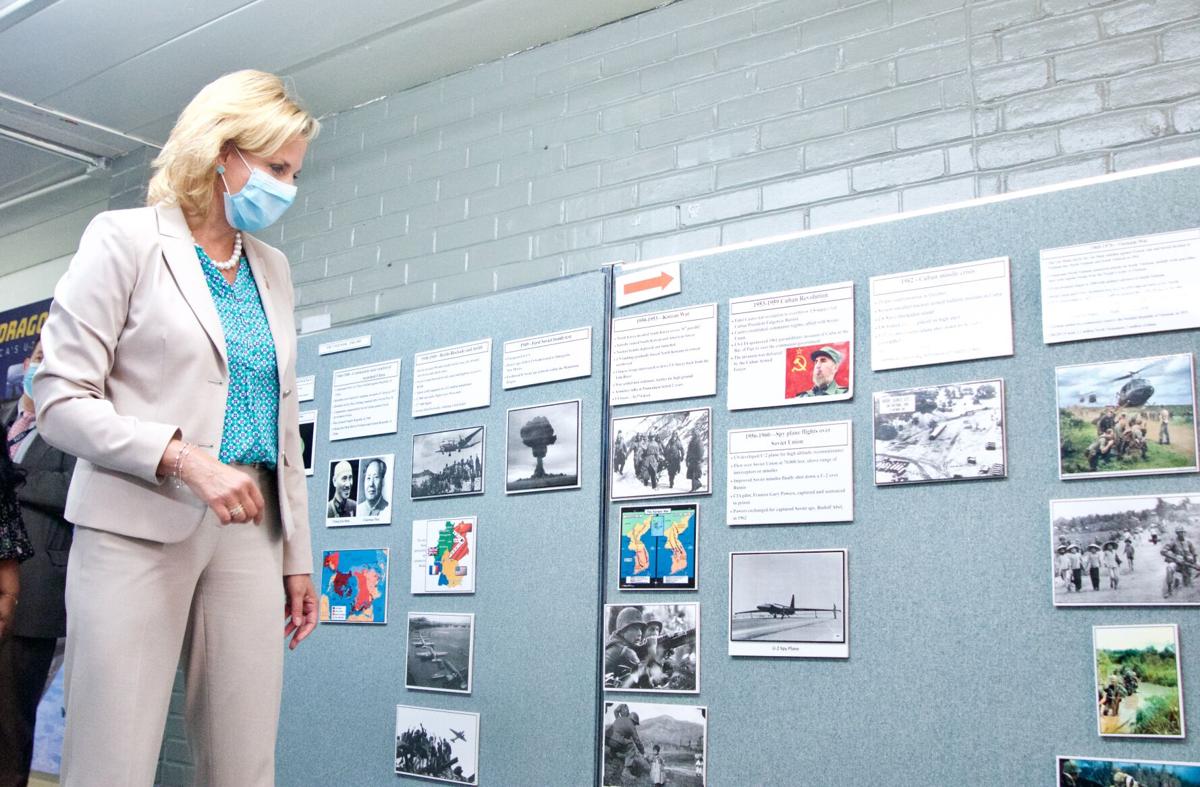 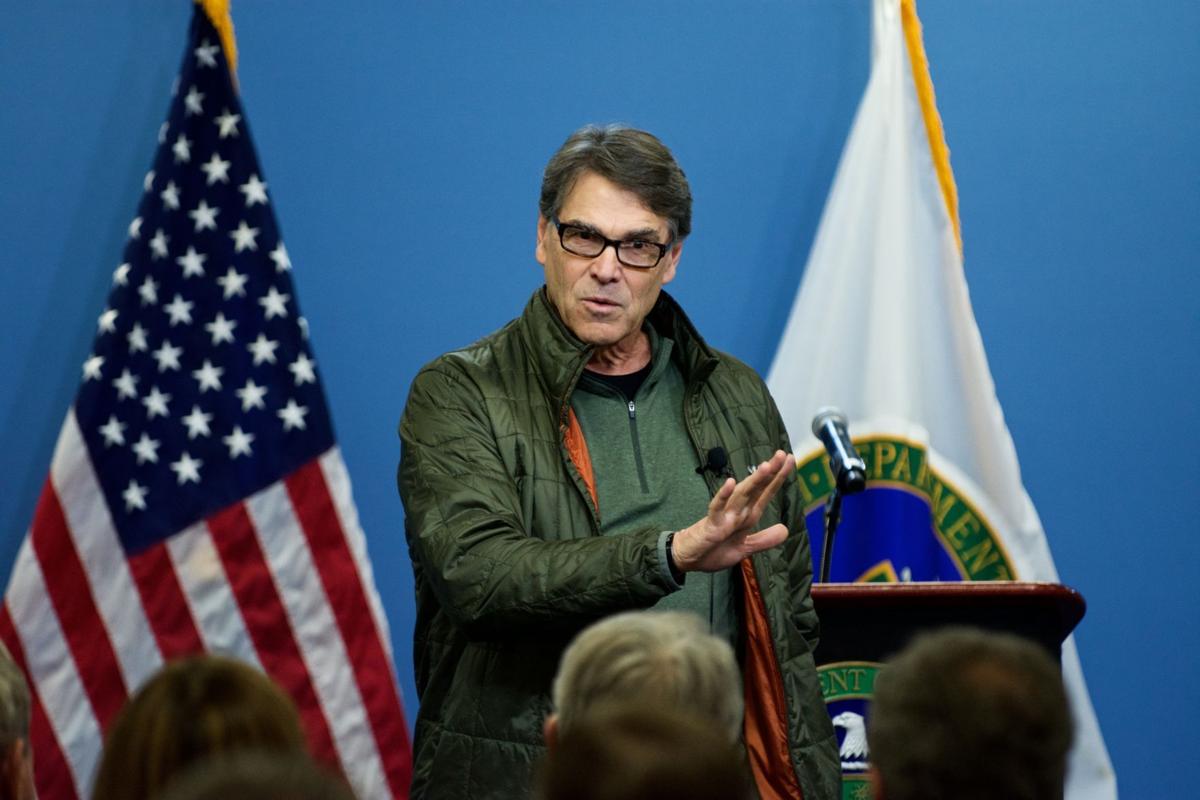 Rick Perry, then the U.S. secretary of energy, speaks at the Savannah River Site in February 2018. 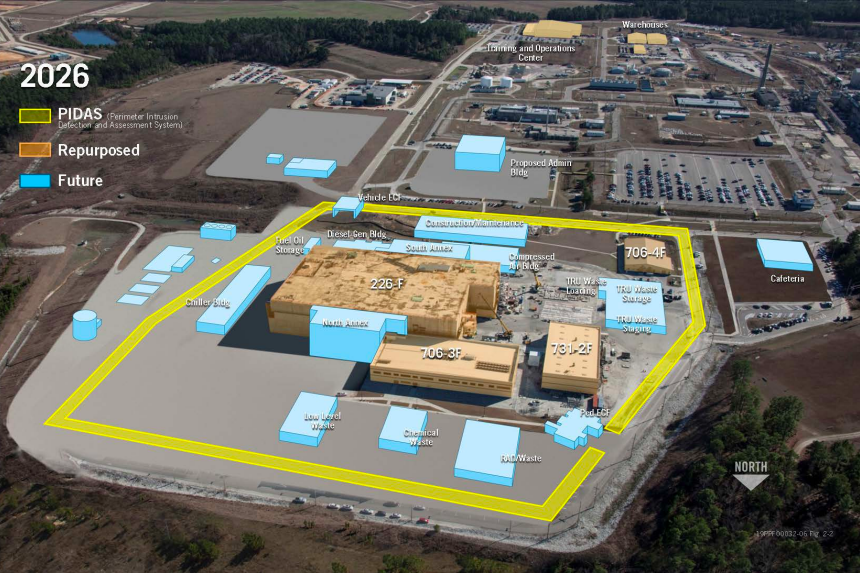 This potential layout of the Savannah River Plutonium Processing Facility, and the broader complex, was included in a recent environmental analysis.

For two days, a Thursday and a Friday, the former Texas governor checked things out. Being boots on the ground at the Savannah River Site – a Cold War institution and a contemporary economic powerhouse – was “powerful stuff,” Perry said at the time.

Photos and other artifacts show the energy secretary, sporting activewear, speaking to state and federal lawmakers, visiting the Savannah River National Laboratory and touring the Defense Waste Processing Facility and the site's tritium hub, a complex poised for exponential growth.

At a crowded town-hall event, bustling with employees, press and South Carolina’s senior senator, Perry made a prediction: The future of the Savannah River Site is “very bright.”

But keeping SRS at fighting weight, he suggested, requires looking and thinking ahead.

What is now the Savannah River Site – a 310-square-mile sprawl insulated by woods, hardened by paramilitary protection, and dotted by industrial goliaths – dates back to 1950, years after the decimation of Hiroshima and Nagasaki, when President Harry Truman requested DuPont’s expertise for a fledgling atomic project.

Years of production and toil, often in secrecy and in the Cold War pressure cooker, proved to be the source of both folklore and environmental scars.

Cleanup, remediation, demolition and deactivation at the Savannah River Site has been, and will continue to be, a long-haul endeavor. The Energy Department’s nuclear cleanup office, Environmental Management, stewards the site; attention was recently trained on the Salt Waste Processing Facility, a Parsons project meant to churn through millions of gallons of radioactive waste every year.

But the site’s roots, nuclear and national security, remain healthy. They are ready to grow, too.

“For the past 70 years, SRS has been at the forefront of national security, environmental stewardship and world-class innovation. In these unprecedented times of 2020, we have risen to meet the challenges and continue a proud legacy of serving this country in safely carrying out the important missions we are charged with,” said Savannah River Site manager Michael Budney, an Energy Department official.

He added, “We look forward to the future and an enduring legacy of success.”

At a meeting of the S.C. Governor’s Nuclear Advisory Council last week, Savannah River Nuclear Solutions President and CEO Stuart MacVean worked through a presentation seemingly more technical and in depth than the one he can skim at breakfast forums and community get-togethers.

A single slide captured the shifting landscape at the site, which Savannah River Nuclear Solutions for now manages and operates.

In fiscal years 2018 and 2019, a majority of the contractor’s portfolio, 60%, was attributed to Environmental Management. Those same years, 35% was attributed to the National Nuclear Security Administration, the Energy Department’s weapons-and-nonproliferation arm.

"A few years ago, there was talk about closure strategies, which would be hugely detrimental to our area in the long term," state Rep. Bill Taylor, an Aiken Republican, said Friday. "Today, SRS's future looks similar to the critical missions that gave it birth 70 years ago – national defense."

A raft of significant National Nuclear Security Administration projects are on the horizon, or already in the works, at the Savannah River Site; the agency's leader, Lisa Gordon-Hagerty, has said SRS "plays a vital role in" its future.

Chief among the considerations are the one-of-a-kind tritium enterprise; dilute-and-dispose, a means of processing and disposing of plutonium out of state; and plutonium pit production, the forging of nuclear weapon cores in an effort to, administration officials say, sustain and refresh the nation's arsenal.

In May 2018, months after Perry’s Savannah River Site swing, the NNSA and the Defense Department together recommended making the plutonium pits – also known as triggers – in two states. Fifty pits per year would be made in South Carolina, at the Savannah River Site, they jointly counseled. Thirty pits per year would be made in New Mexico, at Los Alamos National Laboratory, a plutonium center of excellence near Santa Fe.

At SRS, pit production would mean renovating and repurposing the MOX project, which was axed following a legal dispute with the Palmetto Sate.

Since the 2018 advisory, hundreds of people have staffed the Savannah River Plutonium Processing Facility project, as it's become known. A cross-country relationship has flourished as the 2030 pit production deadline inexorably approaches. (Federal law mandates the production of 80 plutonium pits per year by then.) And millions of dollar's worth of work has been executed.

"It’s time to refurbish, it’s time to modernize," said Jim Marra, the Citizens for Nuclear Technology Awareness executive director, "and SRS is certainly the place to do that, that modernization of our weapons program."

Old-timers, Taylor said, "might once again refer to SRS as the 'bomb plant.' It is a critical national security mission in which local residents can take great pride."

But funding is often a question, and rarely a guarantee. And some critics see the pit mission as needless warmongering. Former presidential candidates Elizabeth Warren and Bernie Sanders in a September 2019 letter asked defense leaders to chill the pit production push, describing the undertaking as “unnecessary, unachievable and ill-advised.” Eighty pits per year, the New England senators wrote, was “not required” to maintain U.S. footing on the international ladder.

Flipping MOX into a robust pit factory, SRPPF, could cost about $4.6 billion, according to the U.S. Government Accountability Office, a congressional watchdog. Updating PF-4 at Los Alamos, the second prong of the proposed pit mission, could cost up to $3 billion over the next five years. Last year, the Congressional Budget Office roughly estimated pit production buildout to cost $9 billion over the next decade.

And those sorts of figures foreshadow jobs – lots.

“I know there’s conversations about it occurring here,” Perry said more than two years ago, feet firmly planted in South Carolina. “Those are good conversations.”