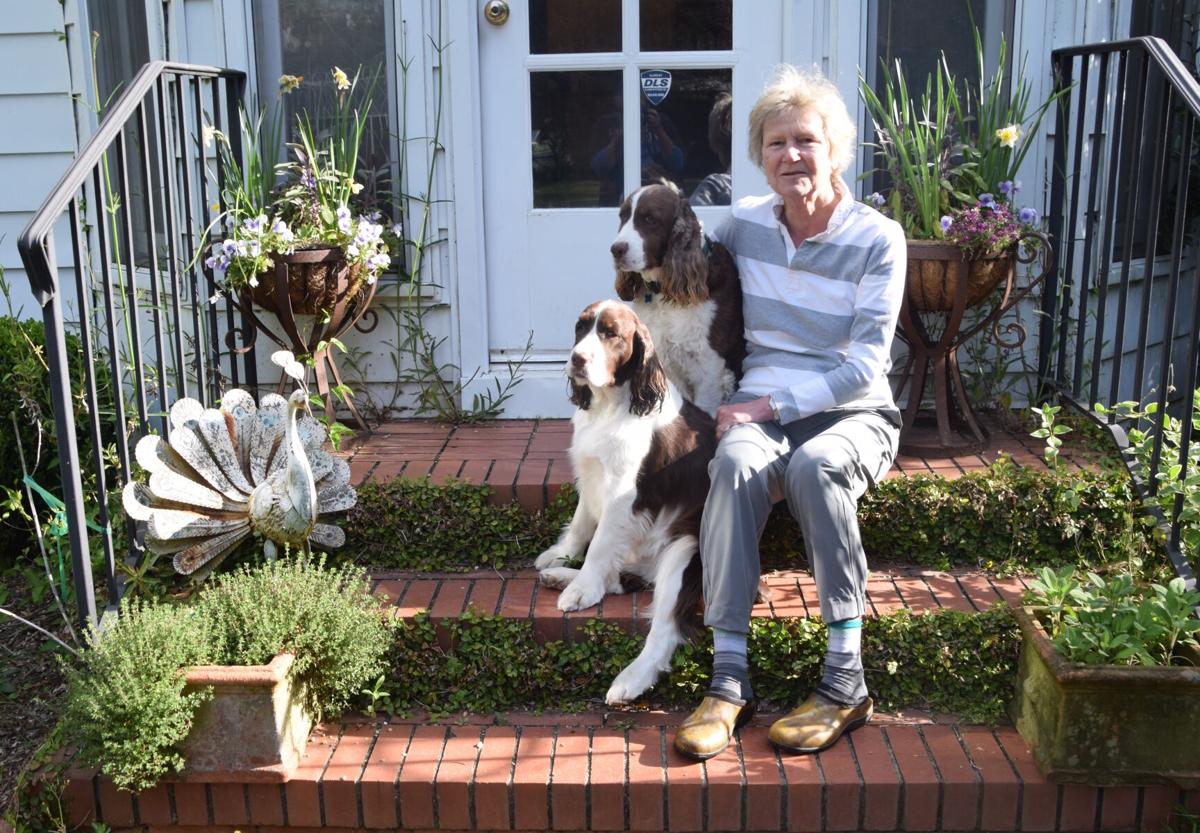 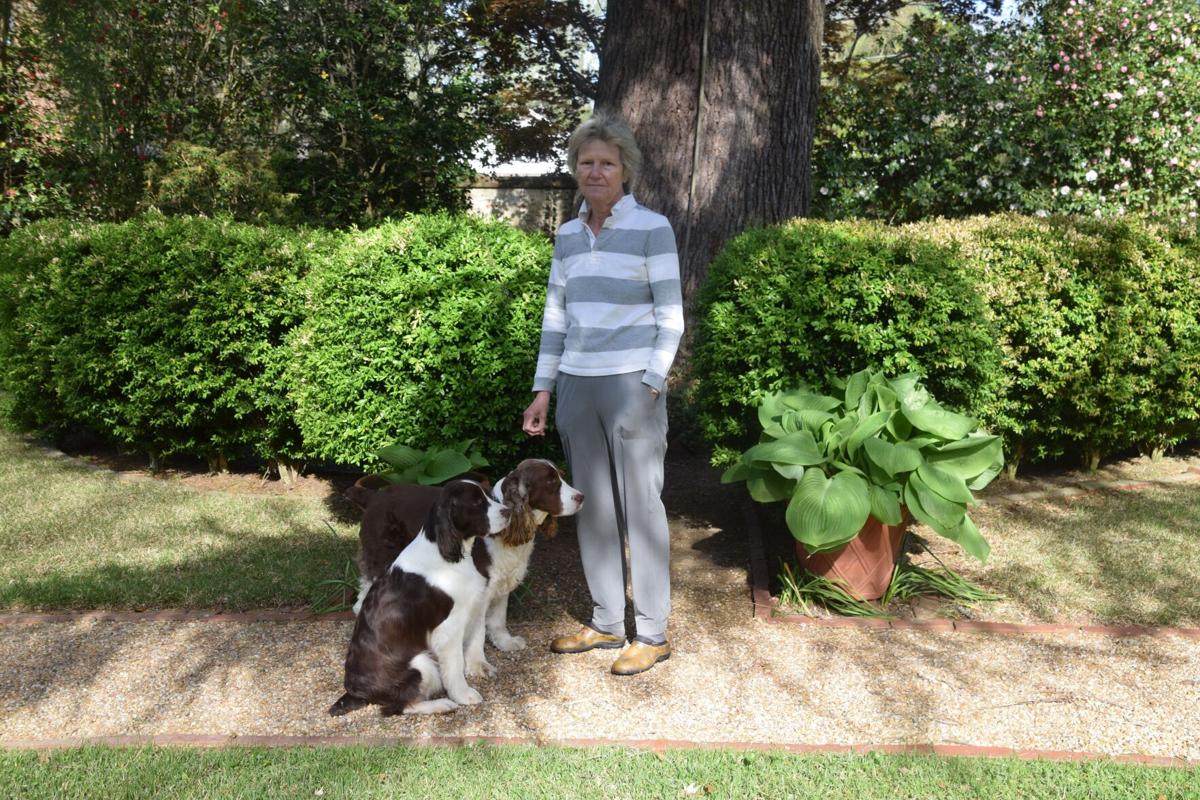 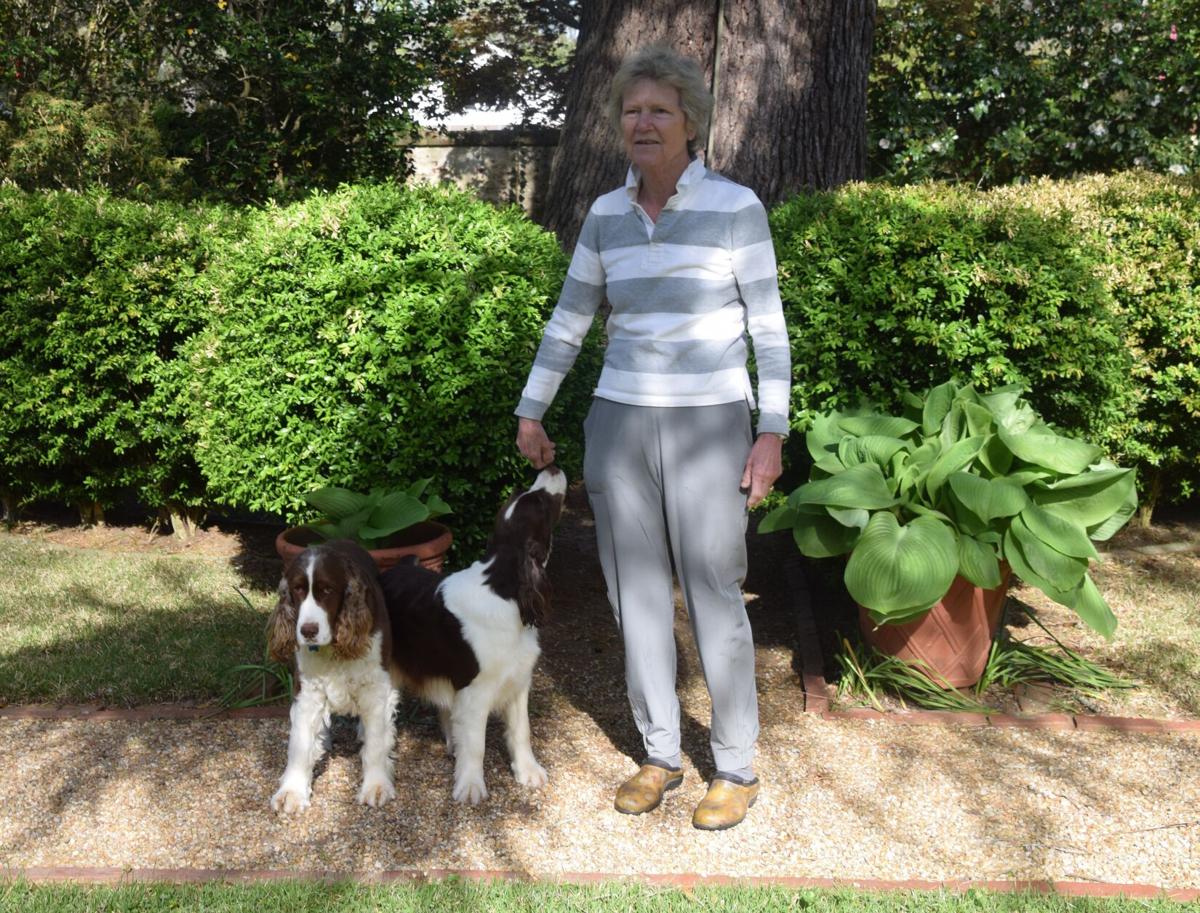 Gail King stands in the garden of her home in Aiken with her English Springer Spaniels named Rory McIlroy, left, and Kevin Kisner also known as Kizzie. 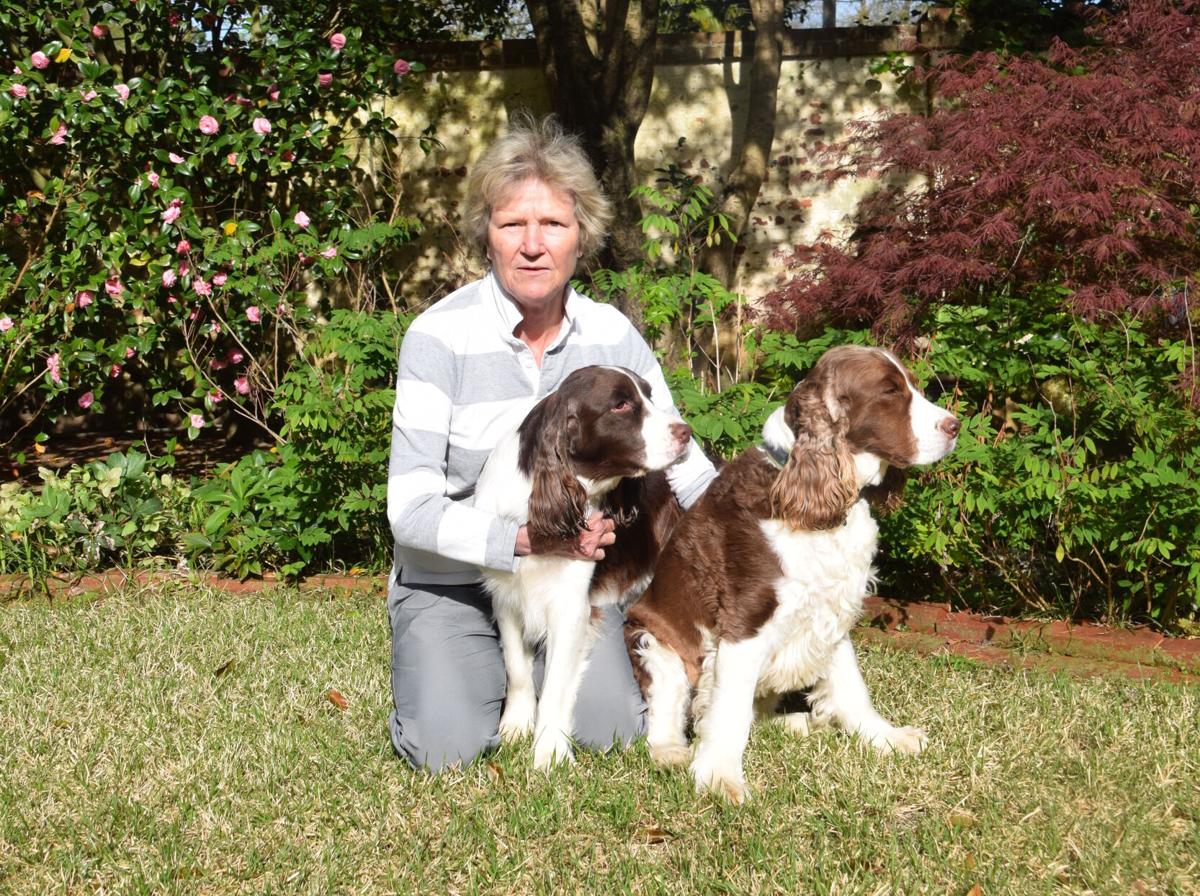 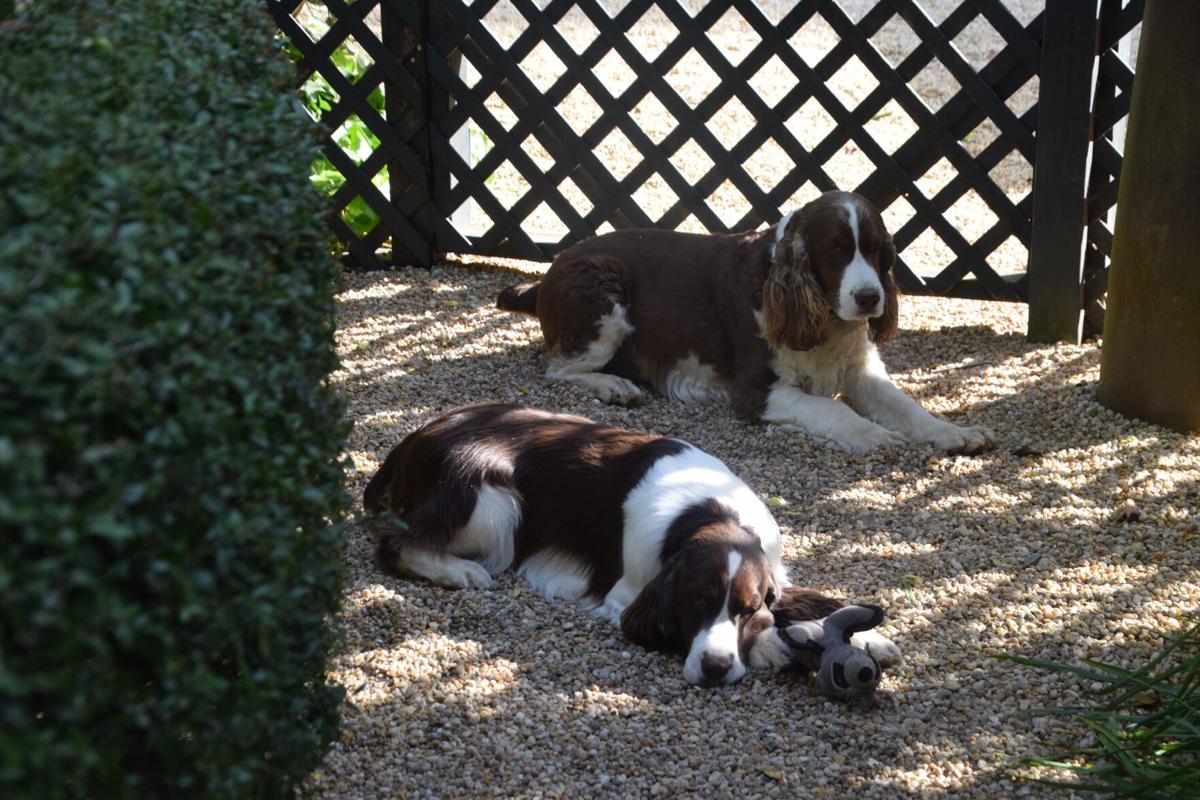 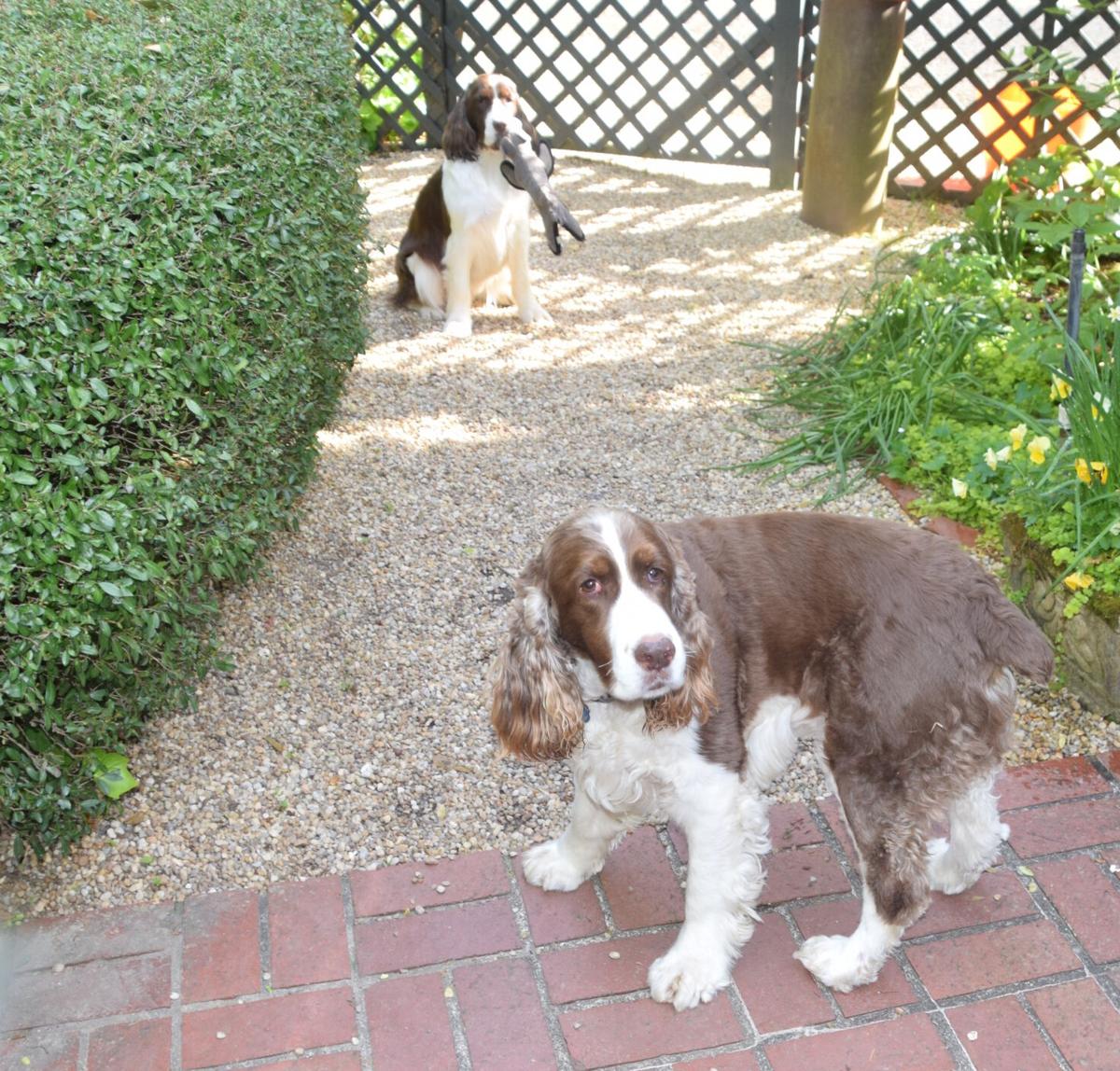 Gail King stands in the garden of her home in Aiken with her English Springer Spaniels named Rory McIlroy, left, and Kevin Kisner also known as Kizzie.

Naming their English Springer Spaniels for well-known golfers and golf terms is a tradition for Aiken residents Gail and David King that has lasted as long as their marriage.

The couple, who celebrated their 50th anniversary last summer, received one of the dogs, Divot, as a wedding gift from Gail’s aunt and stepsister.

“That was the first one that landed in our lives,” Gail said. “My aunt owned the sire (father), and my stepsister owned the dam (mother), and they had puppies.”

A divot is a small piece of turf dislodged by the swing of a golf club.

“David is an avid and very good golfer,” Gail said. “I enjoy playing golf, but I’m no good at it.

“We have been to the Masters in the past, and we loved it, but I’m not big on crowds these days. David has played it (Augusta National) a few times.”

"After Birdie, we got a puppy,” Gail said, “and David wanted to call him Shank, and I said, ‘Absolutely no way. It doesn’t roll over the tongue. It’s a bad shot. No.’

“My golfer of the moment then was Rory McIlroy,” Gail continued. “I had a complete crush on him, and so now we have Rory McIlroy.”

Then “we called the next puppy that came along Kevin Kisner because we know the Kisner parents – they are good friends of ours – and Kevin Kisner (the golfer) obviously is from Aiken,” Gail said.

The dog also is known as Kizzie.

The Kings, who have lived in Aiken since 1977, usually refer to their canine Rory McIlroy as simply Rory or Rory Mac.

“I walk them twice a day – big walk in the morning and a little walk in the afternoon, generally,” said Gail, a native of England.

Kizzie, Rory and Gail enjoy strolling in Hitchcock Woods and on the dirt roads in Aiken’s Horse District.

“Hitchcock Woods is sort of my spiritual place; it really is,” said Gail, who was the director of the Aiken Horse Show for more than 20 years.

Even though golfer Kevin Kisner lives in Aiken, Kizzie has never met the inspiration for her name.

But the dog “has had a conversation with the Kisner family,” Gail said. “In the summer, we go north to Fishers Island (approximately 2 miles off the southeastern coast of Connecticut). Last summer, Kizzie wrote a letter to Kevin Kisner, and it said, ‘Dear Mr. Kisner: My family would like to invite you to come up and play the golf course on Fisher’s Island. … I live with Rory McIlroy.’

“We never heard a word back, and I thought, ‘That’s interesting. I look like a complete fool,’” Gail continued. “Then out of the blue, I got a text from Brittany Kisner (Kevin Kisner’s wife) saying, ‘Our family loved Kizzie’s letter.’”

With only one exception, all the dogs owned by the Kings during their marriage have been English Springer Spaniels.

“At one point we had a Scottish Terrier called Dundee,” Gail said. “But once you fall in love with a breed, you just want that breed.”

There are several reasons why she is so fond of English Springer Spaniels.

Masters 2022: 10 things to know about this year's tournament

Gail already has some names in mind for any English Springer Spaniels that might join the couple’s household in the future.

“I’m thinking about Caddie or Rosie for Justin Rose because he’s a British golfer that I like a lot,” she said.

Gail's father, Gerald Balding, was a 10-goal polo player. He was is inducted into the Hall of Fame at the Museum of Polo in Lake Worth, Florida, in 2019.